Inside the Spanish Royal Academy, under the portico of the outdoor cloister (an area also used for studying by resident scholarship holders) and among the lunettes painted by Nicolò Circignani, “Il Pomarancio”, between 1587 and 1588, the two display rooms of the exhibition Reactivating Videographies curated by Estibaliz Sádaba Murguía and Speculare il Caos (Reflecting Chaos) curated by Anita Calà can be found.

This exhibition-video fusion represents the beginning of a much larger, ongoing, itinerant project. The artists selected for this premiere will be in conversation with other artists selected by local curators in different Ibero-American cities over the next two years and then conclude the journey with a final exhibition at the Spanish Academy in Rome, where the entire project will be presented. The idea of the two curators was to present video works where the space is conceived not only as a container with the work as an ephemeral object, but as a dimensional window through studied chaos. The exhibition presents three displays, two video projections and a video installation in which the object becomes an integral part of the work. The arrangement of the works is well coordinated and skilfully arranged by the two project curators and allows each location to visually “breathe” in order to enhance the viewing experience. The two separate but communicating rooms merge, resulting in an almost “perfect” stylistic and environmental coherence, so that the two projects appear to produce a single audio visual installation. 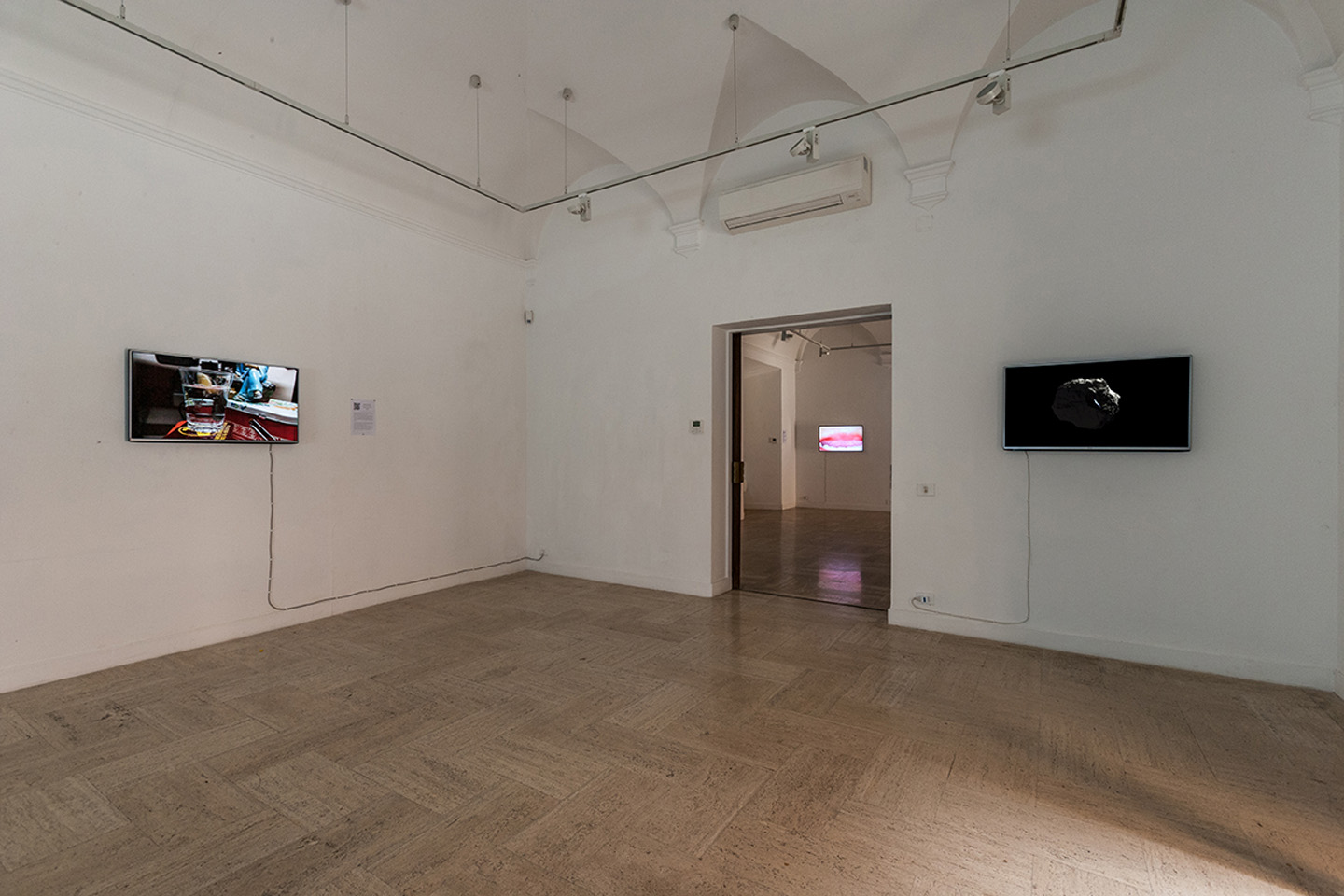 The collective exhibition in Rome brings together the work of three Spanish artists (former Academy residents between 2015 – 2019) and three Italian artists hosted by the Academy and selected by the curator Anita Calà, director of Villam.

In the Spanish room we find the work of artists Antoni Abad, Miriam Isasi and Laramascoto.

In the video Money Honey, *Euro (2019) Antoni Abad presents a work in which a colony of cockroaches form the shape of the Euro symbol with their bodies, arranging themselves randomly each time the video starts again. A graphic work, a video animation that analyses the aleatory concept, a continuous mutation applied with software that randomises arrangement.

The work seeks to analyse the individual and the superfluous. The insects present in the video, among the most disgusting and offensive in the collective imagination, should encourage a reflection when collaboration is shown as a collective force.

Miriam Isasi, with Doppler Eco Tac (2016), is the artist on show with the longest video (32 minutes), punctuated by frames, accompanied by a sound created ad hoc using an experimental orchestra, that gives us an interpretation of the “subjective” through the experience of a brain MRI. A catharsis achieved by images, in which geometrical shapes, worlds upside down, sunsets, seas, moon landings and sun lamps bombard the mind transferring its contents and overturning them on the viewer. 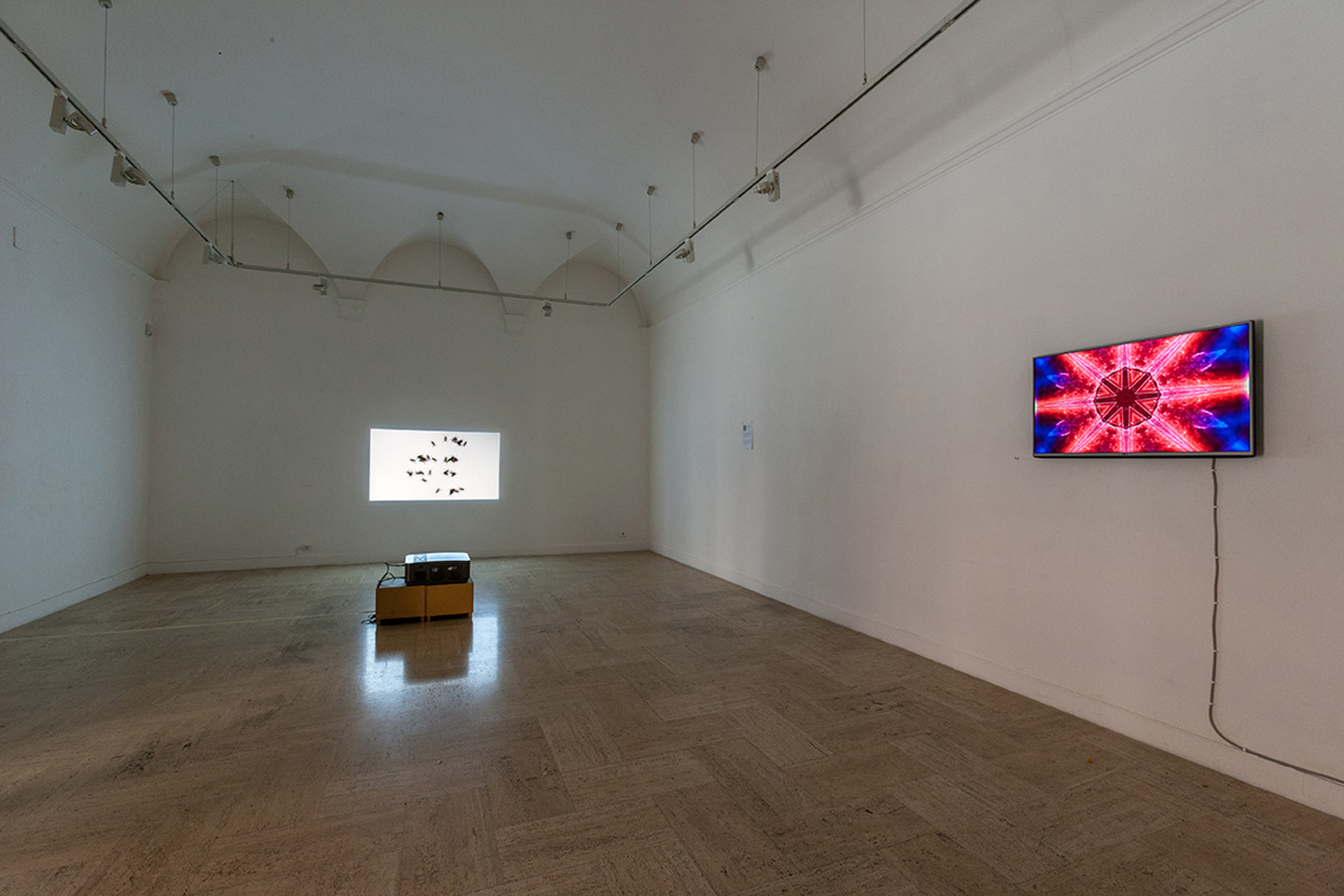 A complex B-mode labyrinth that emerges when the artist, during a medical examination, suffers a temporary loss of vision, defined in diagnostic jargon as amaurosis fugax. The compositional structure of the work, its immediacy in the relationship between images and sound, stylistically recalls MTV music video clips. The music by composer Joan Espasa, created for the piece, deserves special mention as the compositional structure takes data from an ecoDoppler as its reference.

Miriam Isasi’s empirical investigation starts from physics, from the Doppler effect that studies the change in the frequency of perceived sound waves in relation to the relative motion between two bodies – a dynamic that takes place in magnetic resonance imaging.

Laramascoto presents 1001. Arquelogía futura (2019) is an audiovisual installation in which “a fossil of the future” rotates around its own axis. Inside it you can glimpse the flow of digital life, a sort of imploded technological lava, incorporated like incandescent slime to represent a new era. The work is a reflection on the technological revolution and human existence, but there is absolutely no reference to mankind or the advancement of the species; rather, it serves to question our system, our future and our hypothetical extinction. Looking at the fossil we are faced with a spiritual condition, a sort of monolith, as in Kubrick’s masterpiece 2001: A Space Odyssey; it reaches a state of pure energy by passing through years of evolution. Its organic and metaphysical matter develops cyclically in a space without a galaxy.

With Francesca Arri in Self Portrait (2012) we find ourselves facing a large video projection featuring a performance where the artist literally lays herself bare and continuously mocks the spectator who becomes the artist’s target. Her body is present in the scene, recalling the shots of photographer Julia Fullerton-Batten in the Unadorned project. 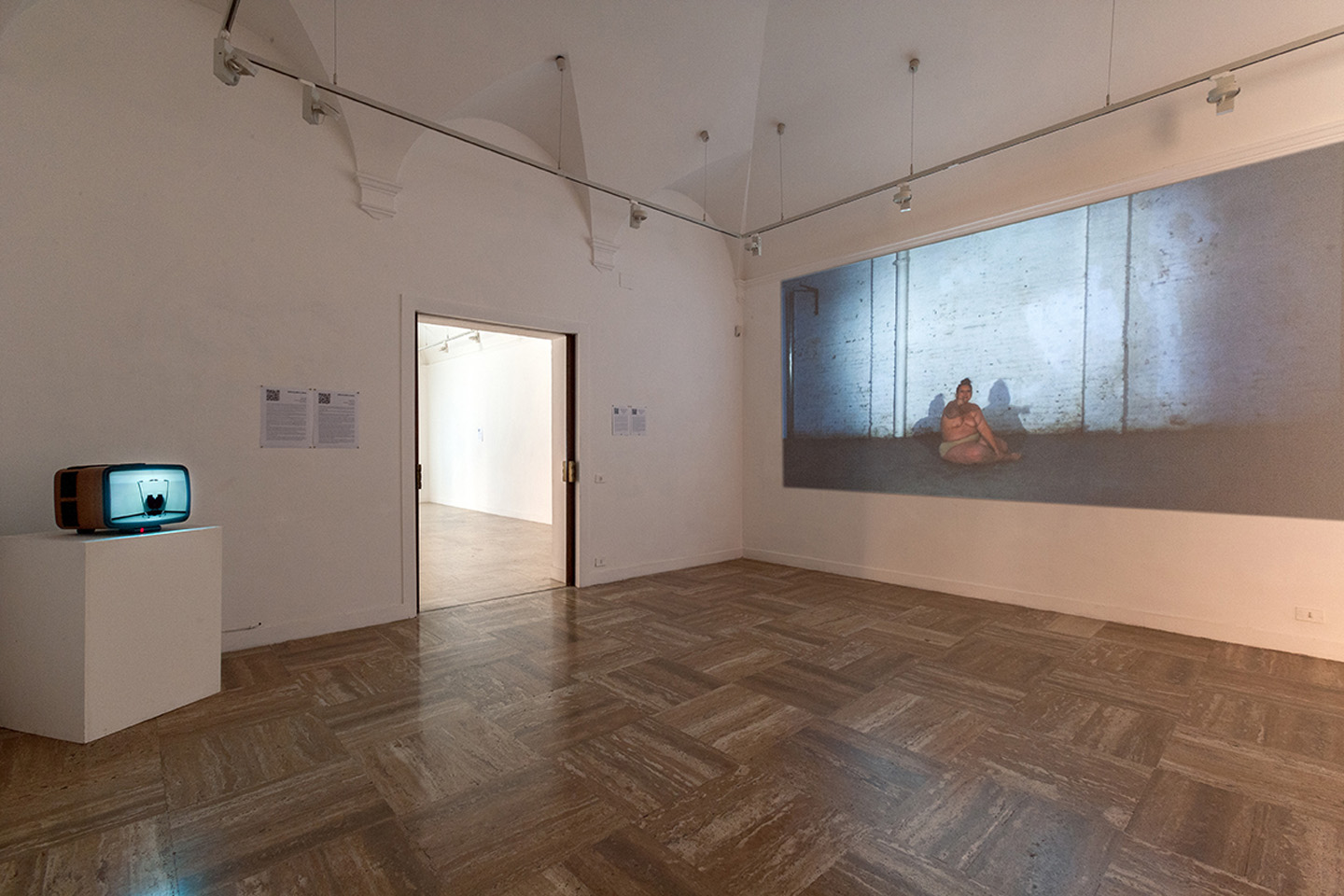 The video is accompanied by an audio recording that is equally important in the reading of the work. In this audio a continuous laughter can be heard, emphasising the interaction created with the viewer. The roles are continually reversed providing the work with a strong sense of interaction causing the heaviness of her body, her laughter and her pointing finger. There is no shame but a structured awareness of the flesh, overcoming its limits – a theme that is a product of our times where standardised beauty penalises those who are different, making them into victims of a common aesthetic canon. Francesca Arri mocks those who feel entitled to laugh at her body and turns the evil of this rotten society against itself.

Matteo Attruia’s work is essentialist, minimalist. On an LDTV screen the lips in the foreground are the only image we see, repeating in a loop (with a robotic voice) the sentence that is the work’s title, All I Need is All I Need (2019), meaning do I need everything… or nothing? Consumer society would indicate we need everything.

Man can live without all these products, yet we are always looking for something that satisfies us – we are animals whose desires must be gratified.

The mouth in the foreground, glamorous in an 80s style, deliberately cool, connects us to Germanic phonetics for the articulation of words while the references to the world of electronics and robotic aesthetics remind us of the visuals from the “Superclassifica Show”.

Lamberto Teotino in non-physical entities (2018-20) presents the only video installation in the exhibition. The artist has retrieved an old 1950s Brionvega CRT (cathode-ray tube) television with which he transmits, through a custom decoder, paranormal images of supernatural objects which create new shapes by using videos recovered online. In his research Teotino is used to drawing from the archives and in this work presents nine short chapters consisting of seemingly metallic objects that give the viewer a feeling of alien reality. A kaleidoscopic game in which objects are timeless and appear to be absorbed by an empty space that we do not see but whose existence we perceive. Through this specular scenario a distressing and sinister atmosphere can be felt which persists even when the artist explains the work as follows: “It takes me back to an experience I had as a child. I remember going to a place along a road, called “the Devil’s Road”, to observe for hours the phenomenon of a downhill ascent in which a rotating physical object appears to go down backwards.”