The Artist’s Studio As a Total Work of Art

A recently published book by Stefania Zuliani, the result of a study seminar organized by the Art History Archive Laboratory of the Science of Cultural Heritage Department of the University of Salerno in collaboration with the Doctorate of Methods and Methodology in Archaeological and Art History Studies, revived an optimistic glimmer a few months ago in Atelier d’artista (Mimesis, Arte e Critica series, page 200). In an area to be considered as creative training, a fierce utopia, a virtual laboratory, a «mysterious locus of the creative act»[1] (O’Doherty), global text and tale; I would say the extroflexed brain of the artist, moral and physical story as Courbet referred to his 1855 work, L’Atelier du peintre.

Zuliani admonishes us: «Whether it is a workshop or factory, alcove or literary parlour, immaculate office or chaotic laboratory of images and failures, attic, piazza or desk, the artist’s studio is the object of analyses that are as complex as they are inescapable, a challenge and a promise for those who see art history not only as an examination of a work – its meanings and reception among collectors and exhibitions – but also of the different conditions and plural relationships which have oriented its production time and time again»[2]. 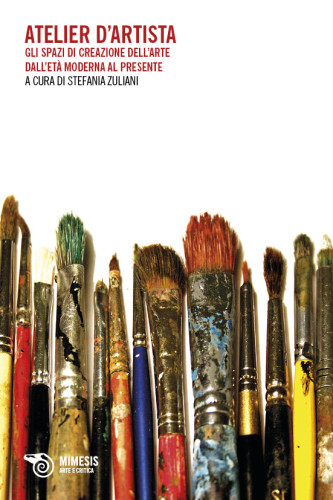 A fertile territory that never ceases to amaze, the setting for conception and, in some cases, merrymaking and sharing (Manzoni’s first line was created with his street companions and it measures 19.93 metres – the exact length of the corridor in his home-studio on 4 Via Cernia)[3], a studio is a place in which one can experience, learn about the artist’s wishes, his or her inclinations and evolutions. But it is also a nucleus from which to embark, at times, for an analysis of the various degrees of art and to construct simple stories dedicated to it.

Atelier d’artista is a sort of journey among the places where art has been created from the modern era to the present: from Renaissance workshops, the homes in Rome of 17th century artists, the bustling workshop of Francesco Solimena and the role of academic Solimena to the workshops situated between the city centre and the suburbs to the homes of the Bloomsbury artists and from the Parisian studio of Mondrian, Ghirri’s photographic odyssey (with a re-visitation of Morandi’s studio) and Brassaï (an interpreter of Giacometti) to the many oscillations and declinations of the art studio between the Avant-garde and Neo Avant-garde movements with examples by Gerard Richter and Michelangelo Pistoletto or the studio as social space (more specifically, a field for public art) and a operating room (as is the case of ORLAN) or the studio as a probing query of the present and future (post studio?). In fact, this is a polyphonic «ensemble»[4] book, as Zuliani points out in the preface, which fords across to an irresistible place of art. To a physical and mental environment, as Angelo Trimarco suggests in his contribution «like the bird of Arabian myth which is born over and over again from its own ashes»[5].

[1] B. O’Doherty, Studio and Cube. On the relationship between where art is made and where art is displayed, Princeton Architectural Press, New York 2007; Italian translation, idem, Inside the White Cube. L’ideologia dello spazio espositivo, Johan&Levi, Milan 2012, page 90.

Call for proposals > AUGMENTED REALITY – AUGMENT IT YOURSELF (AiY)