by Arshake
in From the Past

New York, October 1966. Forty engineers and ten artists stage “9 Evenings: Theatre and Engineering”, and from this experience solidify their collaboration with the founding of the non-profit organization E.A.T. – Experiments in Art and Technology. During “9 Evenings: Theatre and Engineering” John Cage staged his “Variations VII”, a sound system that used telephone lines, radios and even the brainwaves of the participants to create random modular music using the sounds of life. 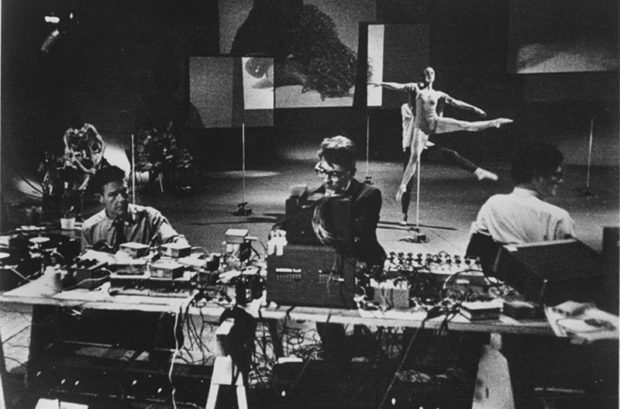 As often happens, the solidifying of a vision that then becomes a necessity is born of facts and reflections that evolve in a gradual manner. In this way E.A.T. was preceded by various collaborations and alliances between artists and engineers, such as the collaboration in 1960 that saw Billy Klüver and Jean Tinguely working together to create the self-destructive machine Homage to New York. From Tinguely’s introduction of Klüver to the American artist Robert Rauschenberg with whom Klüver then collaborated on various projects, the connections continued and his scientific knowledge was made available to some of the most prominent cultural figures of the day, such as the artists Jasper Johns and Andy Warhol, dancer Yvonne Rainer, composer John Cage, and experimental choreographer Merce Cunningham. When the idea of E.A.T. was presented to an extended group of artists in 1966, its founding became reality. Robert Rauschenberg was named chairman, scientist Billy Klüver president, Robert Whitman treasurer and Fred Waldhauer secretary. This mission statement was formulated by Rauschenberg and Klüver as follows:

The response to this initiative was enthusiastic, and in 1969 E.A.T. counted 2,000 artists and as many engineers wanting to find an audience for their collaborative projects. According to the Technical Service Program instituted by E.A.T., and on the basis of various individual needs, each artist was assigned to a technical figure or scientist who made his expertise available. The exchanges happened individually, artist to scientist, and often took place in the scientist’s laboratories where the technologies were to be found, such as the renowned Bell Laboratories in Murray Hill or the IBM laboratories in Armonk, New York. The experiments of E.A.T. were presented in important museums of contemporary art such as the Jewish Museum of New York in 1968, the MoMa of New York with the exhibition “The Machine as Seen at the End of the Mechanical Age”, and the Moderna Museet of Stockholm with “Utopia & Visions 1871 – 1981”. The intersection between art and science, and the interest that this generated in museums, even if sporadic, thus has a story longer than mere recent memories!

Dancing on the Net