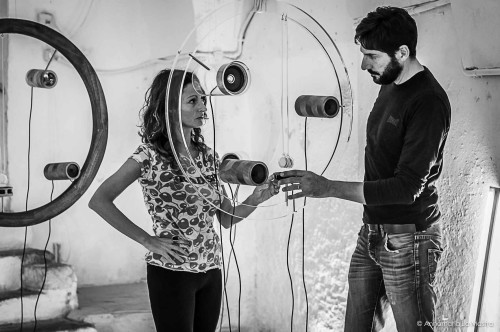 The two Italian artists Tamara Repetto and Raffaele Quida have chosen to exhibit together in an exchange of creative approaches towards their individual artistic quests that are as different as they are complementary. The result of this union is «e’», a single vision of a shared project supervised and curated by Michela Casavola conceived for the halls of the historical Palazzo Mongiò in Galatina (Province of Lecce).

«E’» (Is), third person singular of the [Italian] verb «to be[essere]», sums up everything expressed by the artists in an unorthodoxly polyhedral manner through installations which use the walls of the palazzo to weave their experiential tales. Paper is the alpha and leitmotif of the exhibit and broadens into an analysis of life that can be traced somewhere between fullness, emptiness and the passage of time. Presence and absence leap back and forth between the liquid and physical world at a rhythm which this, our digital era makes increasingly more rapid and pressing albeit less defined along its boundary lines. For Raffaele Quida, paper is a «means to accentuate the passage of time while colour is being in metamorphosis». It is with these properties that he gives shape to two imperceptible states of being and of participation at the precise moment in which they cannot be detected or when space is empty and time acts invisibly – leaving a trail of its passing through the mark of transformation. For Tamara Repetto, paper is perceived as «a dying species of material and informative support within the fluctuating world of a digital era». Paper, as well as the industrial process used to make it, is called to the attention of each of our senses, and liberated into space through multisensory poetry capable of capturing and activating all of our perceptive facilities (sight, smell and sound) to the point in which its presence is as unquestionably tangible as its technological origins. 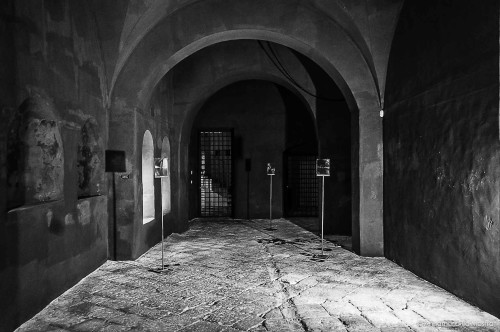 By immersing sheets of paper in a black pigment (Esercizi di Istante – Exercises of an Instant), Raffaele Quida marks and articulates time through numbers which keep track of the duration of the immersion, thus making it visible. Time is also present in Punti di Incontro (Meeting Points), through the visible effects of a lamp’s rays of light falling from the ceiling onto thermal paper set on sheets of glass.  When paper casings containing cement powder come into play for this very installation, they undergo a transformation dictated by contact with water and at a certain point they leave the scene to the «vacuum»that appears when the completely absorbed paper vanishes and is condensed into a block of cement.

Paper is at the core of all of Tamara Repetto’s works: from those expressed exclusively through drawing, such as those featured in her Frattali (Fractals) series – some of which are on display at the exhibit – to her more technological works in which her preparatory sketches represent an important point of the creative process (conception, design and research) before the work is completed. Repetto responds to Quida’s condensation of matter with her liberation into space within a completely sensorial dimension. Her installation Oniria releases paper and its production process towards sounds and smells, thus involving all perceptive facilities as they expand and are dispersed through space. Tamara visited the Burgo Group paper factory,  one of Europe’s leading manufacturers of paper, to capture samples of odours and sounds (of the machinery there). The odours were reproduced by the Nobile artistic perfumery which works with technology applied to fragrance and compressed into scented pods that the artist diffuses through specifically designed ventilation systems. Sounds are returned unaltered to space through speakers with six different audio channels, two of which are fixed while the other four are in motion. These «sensorial devices» are contained within an installation that fuses its structure into two circular sections in wood and Plexiglas (a comparison between the temperatures of various materials is a theme this artist holds dear) and a shape which evokes those of the rolls of paper found in the factory. 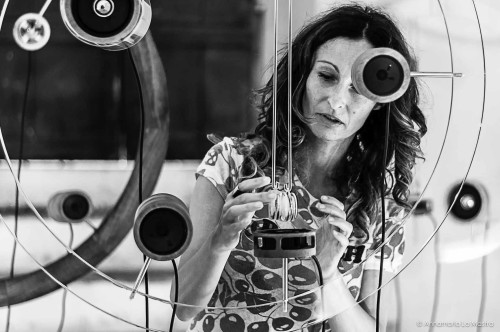 «E’ [Is]», curated by Michela Casavola (coordination by Cosessantuno Artecontemporanea), Palazzo Mongiò, Galatina (Lecce, Italy), 11.10 – 29.10.2014. The realisation of the installation  Oniria, by Tamara Repetto, was made possible by the technical support  by Nobile, Oikos Fragrances, and by Antonio Alessandria.