The «spatial performance» by G.Maria Tosatti 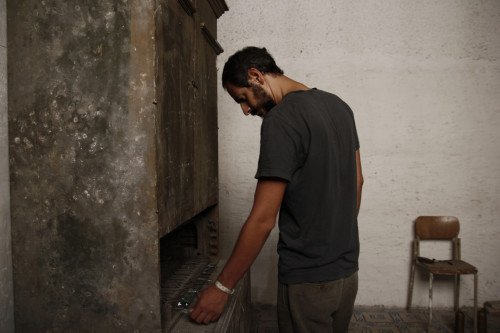 Gian Maria Tosatti (b. Rome, 1980) focuses his artistic quest upon the dialogue between man and space. Space is intended here as architectural space – a home to our memories – as well as in terms of an essential «shared plane», a contact zone between the artist and society. His work is built fundamentally upon the intersection of two planes: an external plane and a metaphysical one that bring a unique and subjective experience into being. His works in general are developed in abandoned buildings pervaded with history, marked by the passage of time; places in which the presence of those who had lived there is crystallized. It is there that the artist creates an evocative scenario, discouraging at times yet capable of immersing visitors in a myriad of sensorial forces that will inevitably transport them towards a path of introspection. Tosatti is an explorer of the human condition. His entire analysis is based upon a study of identity and through a perceptive revision of the environment; he aspires to build «recapitulatory mirrors» which reveal to visitors a projection of themselves, much like the way litmus paper reveals a condition.

«The spaces I choose possess a magnetism all their own. It’s not easy to describe, but they find a way to be recognized»,  the artist affirms. This time he has selected Naples as a fertile territory for his research. The project, curated by Eugenio Viola, is called Seven Seasons for the Spirit and will last for two years. The whole city is involved as the artist carries out a scrutinized examination of its infinity of contradictions. As Caravaggio did in his Seven Works of Mercy, Tosatti presents a snapshot of contemporary society to give rise to «emotional situations» that involve the public in a reflection upon the current and problematic condition we all share, global crisis and the individual crisis at their root. Inspired by Saint Teresa of Avila’s The Interior Castle, Tosatti conceives a work that subdivides a path of knowledge into seven «dwellings»- representing the same number of spiritual planes – which transform the city into a broad metaphor of the human being. The first stage of this long itinerary is the Church of Saints Cosmas and Damian located on the Largo dei Banchi Nuovi. The church has been closed since World War II and will be re-opening to host 1_La Peste (The Plague), an environmental installation that acts upon the precariousness of the site, becoming an allegory for today’s spiritual crisis of which we are all both victims and perpetrators, infected and plague spreaders. This «stratigraphic» work is distributed throughout the building’s three storeys and aims to touch the various levels of consciousness of those passing through. The church is overflowing with symbols, statues of divinities and talismans through which visitors can create their own path: the «bandaged» altars seem to represent the «fracture» and the «immobility» of a suffering social body. In the corner there is a fire, the intermediate element uniting the earthly with the divine. It becomes a symbol of the warm glimmer of hope in a cold, dark «collective lost soul.» The keys of the organ are stuck, making it impossible for a «propitious» melody to arise from it (like the ones composed by Domenico Scarlatti) and heal our schizophrenic society. A series of ambiguous elements solicit us to reflect upon the moral responsibility we all have: shall we fall asleep and succumb to intellectual lethargy or shall we react and recover a freedom of thought and action too often denied? The hypogeum at the base of the installation is an authentic crypt – gloomy and with an air of evanescence – the place wherein lies the perishing individual conscience of contemporary man. References to La Peste by Camus are obvious, a bitter social and spiritual reflection upon the value of life, death and the psychological dynamics that each one of us develops in the face of external threats. 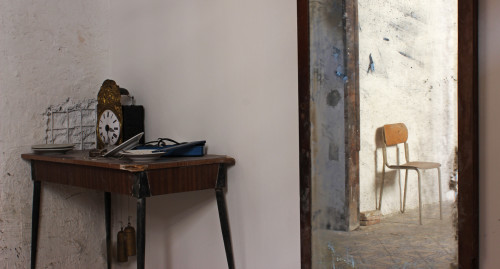 Gian Maria Tosatti concludes his work by covering the main door of the church with a soft white wax, the image of delicateness and fragility, a provocation to the degradation and abandon of the area on which the building stands, a place that emblemizes a community that has always been dominated by chaos and violence. 1_ La Peste is a complex system that proved itself capable of modifying several collective and behavioural dynamics to the point that – notwithstanding the fact that it was initially perceived as a suspicious foreign body – it was finally integrated and inserted in silence into a high-risk area of the city, becoming part of its intricate social and urban fabric.  Therefore, the work of this artist is also a reflection upon the public function of art as an instrument of analysis, a device of cultural cohesiveness, a weapon of resistance and a means through which one reaches an increased awareness of a contingent reality.

Gian Maria Tosatti, La Peste, first intevention of the project «Sette stagioni dello spirito / Seven Seasons of the spirit», promoted and supported by Fondazione Morra and under the “Matronato/Matronage” of Fondazione Donnaregina, part of which is the Madre Museum in Naples, 1.09.2013 – 03.11.2013 Informazioni

FRAME > The Sleep of The Beloved