by Brunella Antomarini
in focus, Not categorized

Arshake is pleased to re-launch an essay on thinking, poetry and writing in the technological era by Brunella Antomarini, Professor of Aethetics and Contemporary Philosophy at the John Cabot University in Rome. The essay originally appeared on the magazine “Smerilliana. Luogo di civiltà poetiche” (Pensiero poesia scrittura in feed back loop, in “Smerilliana”, n.17 2015, pp. 275-90), and it is here translated into English by Francesco Caruso and republished in seven installments.

In La grande beuverie, René Daumal describes two kinds of poets, whom he calls the Pwatts. In the first belongs the passive type, who looks for an inspiration and thinks and struggles until his poetry comes to light. In the second belongs the active type, his head furnished with a spherical, minuscule “poeticizing machine”, filled with thousands aluminum strips bearing different words engraved on each of them. The machine rotates by virtue of thought-generated energy, and occasionally drops words from an aperture underneath, until a whole sentence is formed.

Thinking is not neutral to the technologies it invents and that in turn affect it. Writing is one of these technologies and thinking changes as technology changes. Writing is a device that identifies its own conditions of use and, like any other tool, from the lever on, requires that the organisms that make use of it modify and adapt themselves to it. For each utensil in fact uses its users as tools for its own functioning. Once an aide-mémoire, writing has become a way to stabilize concepts and the occasion of explicit inferential thoughts – that is, written and identified – rather than unconscious ones. From that point onward, writing has become autonomous. It has an emergent character, meaning that by organizing thought according to a specific fashion, it takes on some qualities that its own components are missing. 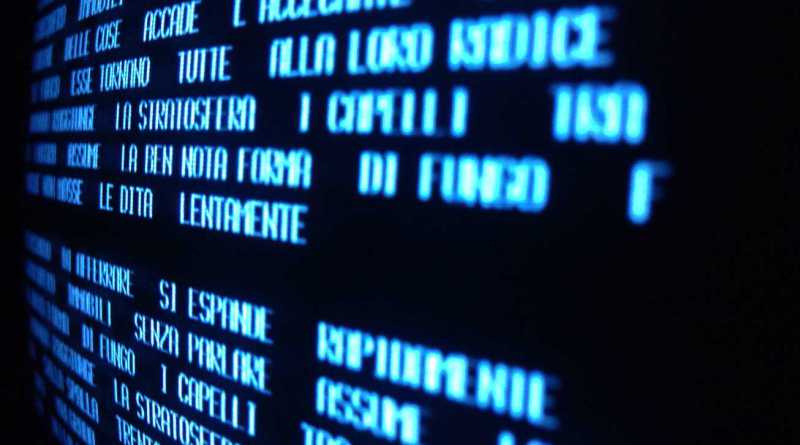 This is why words, even simple ones like in “good morning” or “how are you?”, are problematic for writers. They put them to print not before weighing them, experimenting with them, testing their resilience, permeability and impermeability, their strength and vulnerability. Writers do not use words to express themselves, since expression would imply to send out one’s substantial interiority. (An exclamation mark does not express an emotion: it replaces it.) In fact, each word – or even each syllable, as Amelia Rosselli has put it – must stand on its own. This autonomy tends to deprive authors of their own self or, rather, sets themselves free; the word is not an author’s correlative objective, but its own maker. The word only works as it shows itself or makes itself, by means of the author. Just as we do not see ourselves live, so writers do not watch themselves write.

If this act of pondering and measuring words applies to any author, this is even more true for the poet, since the “metric space” (to use Amelia Rosselli’s words again) is the pure self-display of the power of words, which gives shapes or prefigures or even produces what it prefigures, for it actively fashions or twists reality. It adds to reality, being something that was not there before.

The poet left alone in his own space is therefore the paradigm of a mode of thinking. Perhaps the time has arrived for this paradigm to replace the intellectual mode of thinking. That is, to replace reflection and analysis, which is too burdened with historical, cultural, and bibliographical references; or also that of literary trends and avant-garde, now obsolete, derivative relics of the XX century, of its defeated world wars and successful guerrillas, of artists embracing that masculine need of aggression on behalf of females (of economics, that is).

“Smerilliana” was first published by Enrico D’Angelo in January 2003, in the Marche region. It initially came out every six months. Later every volume of “Smerilliana” became a place of poetic civilisation, with the addition of the series “Poets of Smerilliana” and “Mosaic”. When it first appeared, Giovanni Raboni cited “Smerilliana” while writing in “Corriere della Sera”, calling it the most open-minded and interesting poetry publication on the Italian scene. “Smerilliana” ideally continues the work of the literary biannual magazine «Plural» (founded and directed by D’Angelo in Napoli, between 1986-91), pursuing the pluralist outlook and style of the movement, as defined by the Orientalist Rahim Raza.

Images: Nanni Balestrini, “Type Mark I”, 1961, electronic poetry realized with IBM 7070, here reconstructed and reproduced in a modern computer by Museo dell’Informatica Funzionante.The small wooden TV/box  Il piccolo box/TV di legno (realised by Emiliano Russo – from MIAI, Gabriele Saverio – from MusIF and by  Vittorio Bellanich) reproduced on a cathodic tube, and in back and white, the poetries generated by the software (reconstructed by  Emiliano Russo).