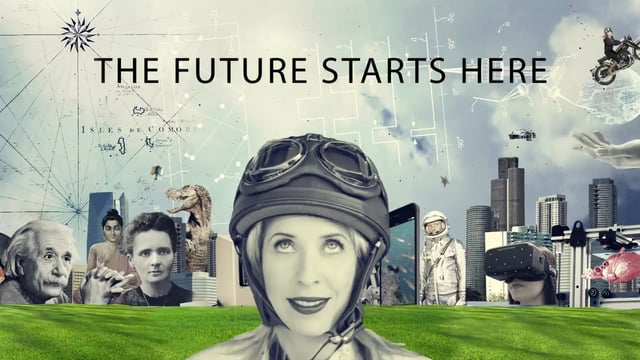 Filmmaker Tiffany Shlain is a figure of reference for the post-cinema, at a time when documentary, story stellying and fiction converge into one, destined to be consumed by the public of the internet. Emmy-nominated filmmaker and Webby Awards Founder Tiffany Shlain has received over 70 awards and distinctions for her films and work, including being named by NPR as having delivered one of the Best Commencement Speeches, Ever, and by Newsweek as “one of the women shaping the 21st Century.”

She has premiered four films at Sundance, including her acclaimed feature documentary Connected: An Autoblogography about Love, Death & Technology, which The New York Times hailed as “high-tech Terry Gilliam,” and “Examining Everything From the Big Bang to Twitter.” The US State Department has also selected three of Shlain’s films including Connected to represent the U.S. at embassies around the world for their American Film Showcase. Her AOL Original series, The Future Starts Here was nominated for an Emmy in New Approaches: Arts, Lifestyle, Culture and has over 40 million views to date. Shlain’s films employ her signature style of fast-paced images, colorful animations, and daring and funny insights to encourage us all to think about where we’re headed in our increasingly connected world.

Tiffany is a world-renowned speaker and has been featured at Google, Harvard, NASA, The Economist Ideas conference and was the closing speaker for TEDWomen and TEDMED. Tiffany was the on-air Internet expert on ABC’s Good Morning America with Diane Sawyer, is a Henry Crown Fellow of The Aspen Institute, is an advisor to The Institute for the Future, and was invited to advise then Secretary of State Hillary Clinton about the Internet and technology. She has contributed articles for Harvard Business Review, Documentary Magazine and was listed by Indiewire & FastCompany for her writing on twitter. TED Conferences published her first book, Brain Power: From Neurons to Networks, and she has been writing a quarterly newsletter about ideas and culture since 1998 called Breakfast @ Tiffany’s. She runs film studio + lab called The Moxie Institute and a nonprofit Let Ripple: Mobile Films for Global Change that makes free films for schools and creates global events to catalyze conversations around important topics. Her films have been translated into multiple languages and had over 50 million views. This fall they just hosted their 2nd annual Character Day that had over 6700 screenings globally of two new films: The Making of a Mensch & The Adaptable Mind. ((from the Moxie Institute)