Through the project IN TOUCH, Palazzo Strozzi in Florence rethinks its own presence in the digital sphere in an attempt to transform a period of global crisis into an opportunity to explore, share, experiment and maintain its identity as an engaging and inclusive laboratory, even if this means doing it at a distance.

We will discuss further on the exhibition by Tomás Saraceno, which was on display at Palazzo Strozzi and which is currently suspended because of the sanitary emergency. His works and vision establishes a perspective on the world that is different from the one we have grown accustomed to, guiding our gaze towards what is invisible but is, in fact, changing the world. 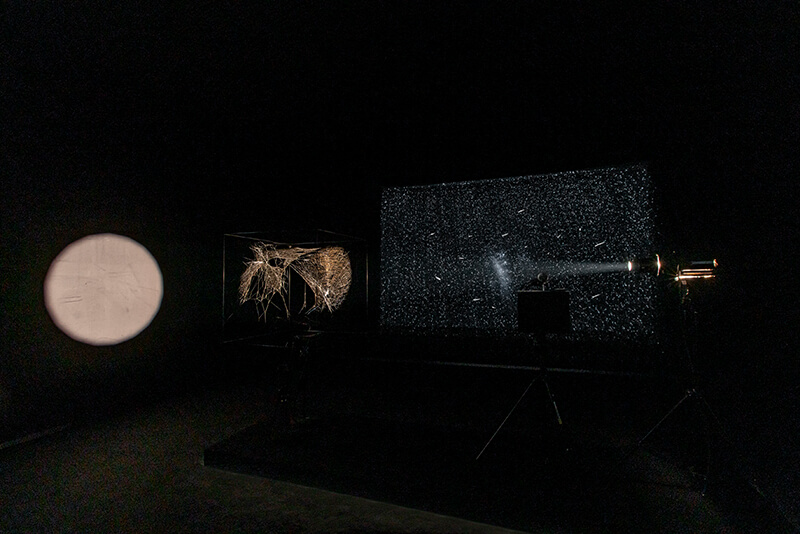 Tomás Saraceno takes directly part to the project IN TOUCH with an exclusive video-message. Starting from the description of one of his artworks, Particular Matter(s) Jam Session, the artist invites us to reflect in a new way on ideas like sharing, awareness and solidarity.

“Our movement influences how fast or slow particles drift through the air. Reducing our movement, and slowing the particles will help everyone to stay safe. In solidarity with Palazzo Strozzi, Italy and the World, let’s move differently for better times.” (Tomás Saraceno)

Hello, my name is Tomás Saracen. And I want to talk about an artwork which is exhibited at Palazzo Strozzi. It is an artwork that consists of a light beam, that illuminates what is floating today through the air. There are millions and billions of particles that move and their movement depends on how we move.
If for example, I talk very close… or I move, some of the particles in my pullover… you can see these particles are released into the air. And if I talk a little bit further from it these particles start to move much more slowly.
What you hear, in Palazzo Strozzi – you what you can hear now this video – is the sound these particles produce when they move. That means every time that I move faster, you can hear the sound moving faster. It’s this “beep beep beep”… If we move slower, the particles produce a different sound. This means it is a way to sonify the way how we are moving through the earth or the movement of particles into the air. This means, if in this time we need to move slower, the sound would be different and the particles will move slower. This means in solidarity for all the people in Italy, in Europe and in the world.
We hope we can become conscious about our actions. How the air it moves today and how much our movement can influence the way… Of how also we can restrict this movement of some of the particles that became so harmful for many people today on the planet earth.