Yesterday the Transart Festival opened at the Museion Museum in Bolzan with a project by Fabio di Salvo, a member of the Rome-based Quiet Ensemble who presented a collage of pre-recorded folk and sacred songs. 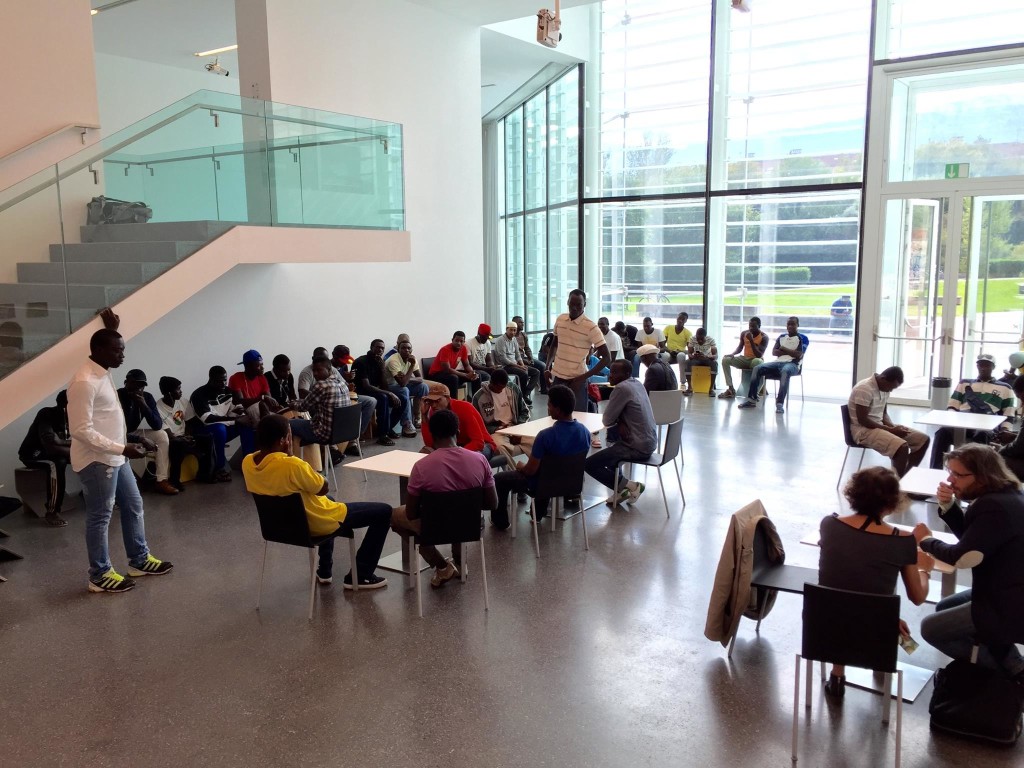 The next portion was dedicated to the immigrants and Eduard Demetz engaged in a musical performance with of an open finale entitled ARDADIOUNGO. They chose Passage, the open area of the Museion chosen as its stage (the area offers free wireless connection), has become a popular meeting place over the years for the many young people who go to the Café to take advantage of its internet point. More specifically, it is frequented by many immigrants seeking asylum who are hosted at a shelter set up by the Volontarius Association at the former Hotel Alpi in Bolzano. In both the indoor and outdoor area of Passage, these guests pass hours and hours on their smartphones communicating with their loved ones who live thousands of kilometres away. These kids have arrived from Asia and various African countries like Mali, Senegal and the Ivory Coast. They speak different languages but manage to get their message across in English or French and even with hand gestures.  ARDADIOUNGO means “Hello. Hi. I’m here” in the Wolof language. The idea is simple and immediate: find a way to give this greeting a musical sound with percussion instruments, voices and things they use every day like mobile phone ring tones. The phone is a most precious tool for these people since it allows them to create a network of relationships and prevent them from severing ties with their roots and loved ones far away.

Thanks to the collaboration of composer Eduard Demetz, who interprets the role of “music man”, a large group of guests at the facility have gotten together recently to compose a melody that tells their story – a story made up of differences as well as of mutual aspects. This was an opportunity to use a pacific and symbolic event to confirm their presence within the city’s makeup and to exchange greetings.

Collaboration with Museion includes another project this year, the first of its kind in Italy, that encourages the audience to participate actively and “get into the game”. A Game of You (the title of the performance presented on the ground floor of the Museion museum) is the third episode of a trilogy created by the Belgian group Ontroerend Goed. From 8:00 p.m. on it will be the entrance gate to this festival: a period dedicated to an unexpected and profound exploration of ourselves and others. After that, The Smile Off Your Face and Internal: the Belgian artists will set the stage for a performance that apparently has no audience, actors or script. One by one and in total solitude, guests are invited to enter a maze and experience an itinerary of listening and observation: the area is transformed into a panopticon that allows them to watch without being seen and feel observed without being sure they actually are, triggering the production of images and fantasies on oneself from other participants and vice versa. A Game of You is a performance that explores the differences among the audience members, the crowd and the observer which reveals the variety of methods through which spectators can explore the same event on an individual basis. The company has made a name for itself by exploring the “pact” between the audience and the performer, deleting all conventional boundary lines separating these two bodies. In an indirect way, A Game of You leads participants into a territory that makes it immediately clear to them that whatever they are seeing in the mirror – or think they know about themselves – is not necessarily what others are visualizing. Participation in this project is available by reservation only (info@transart.it & +39 0471 673070).

The performance of Teiuq, on the other hand, is just a prelude to what awaits the audience in the performance area – on loan for the first time from the Civic Gallery in Bolzano. Technology and nature, concrete imaginary and abstract, a balance between chance and control: these are some of the lines of research followed by Fabio Di Salvo and Bernardo Vercelli, known as Quiet Ensemble. As of 2009, they have dedicated their talents to experimentation and video works through the use of software capable of manipulating audio-videos to explore the aesthetic and conceptual possibilities of interactive techniques. The duo has always focused upon aspects that only seem to be minute details (as opposed to more evident phenomena) such as the movements of a housefly or the sound produced by a lamp, a tiny object or the rustling of the leaves on a tree. For the occasion of Transart 15, Quiet Ensemble is displaying the works created between 2009 and 2015 that have brought them fame on the international art scene.

Fabio Di Salvo affirms that «…various works will be on display at the exhibit. They represent our best creative process like the fragile orchestras (very delicate and sensitive orchestras). For example, the musicians could be plants. It is an invitation to pay close attention to small things, quiet and calming elements which actually possess an enormous amount of energy and can only be perceived though patience».

The halls of the Civil Gallery lit up by the performance of The Enlightenment. The concept behind the project is that each light has its own form of sound and its humming (those annoying buzzing sounds caused by electricity) are amplified. The frequencies emitted by the lights can be felt under your skin and vary, depending on the size of the lamp and its type of lighting system. Bernardo Vercelli explains: «What really counts in our work is a propensity for listening: to redefine a background noise and give it some notice. Musicality is found in what we listen to, much like how meaning is found in what we see… the unexpected orchestra, invisible and fragile, can easily be exchanged for what we take for granted or consider of little or no importance». The Enlightenment is the presentation of audio material hidden within every light on the set. An «invisible concert» where each light externalizes its sound frequency. (form the Italian press release)