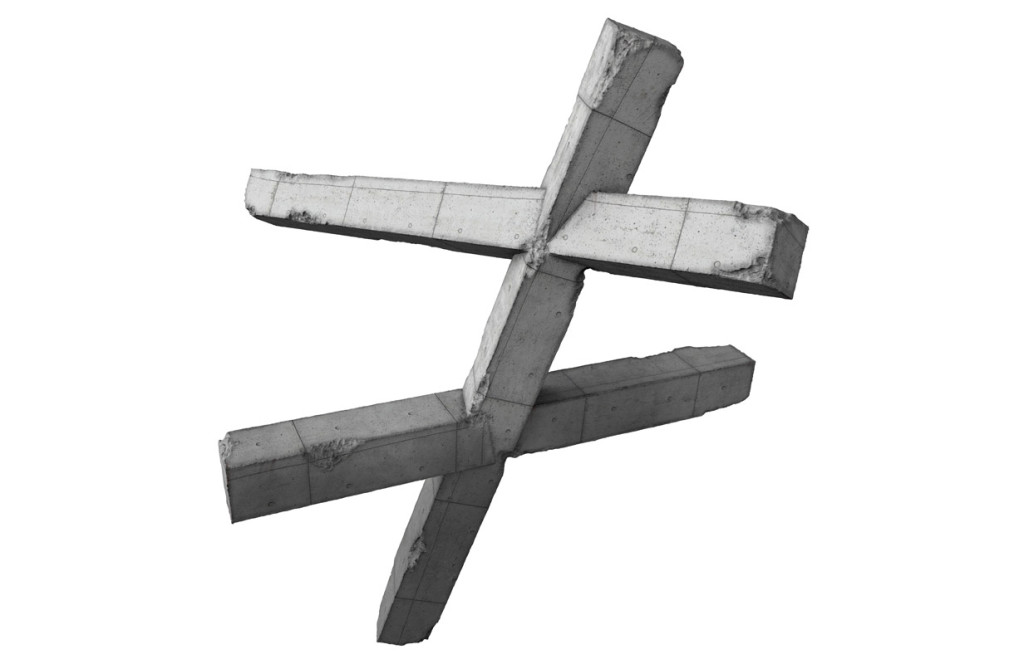 On the occasion of its 30 year anniversary transmediale, the Berlin-based festival and year-round project that draws out new connections between art, culture, and technology, presents the special exhibition “alien matter”, curated by Inke Arns, at Haus der Kulturen der Welt. “Alien matter” refers to man-made, and at the same time, radically different, potentially intelligent matter. It is the outcome of a naturalization of technological artefacts.

Environments shaped by technology result in new relationships between man and machine. Technical objects, previously defined merely as objects of utility, have become autonomous agents. Through their ability to learn and network, they challenge the central role of the human subject.

Approximately twenty exhibiting artists from Berlin and around the world will present works about shifts within such power structures, raising questions about the state of our current environment and whether it has already passed the tipping point, becoming “alien matter”. 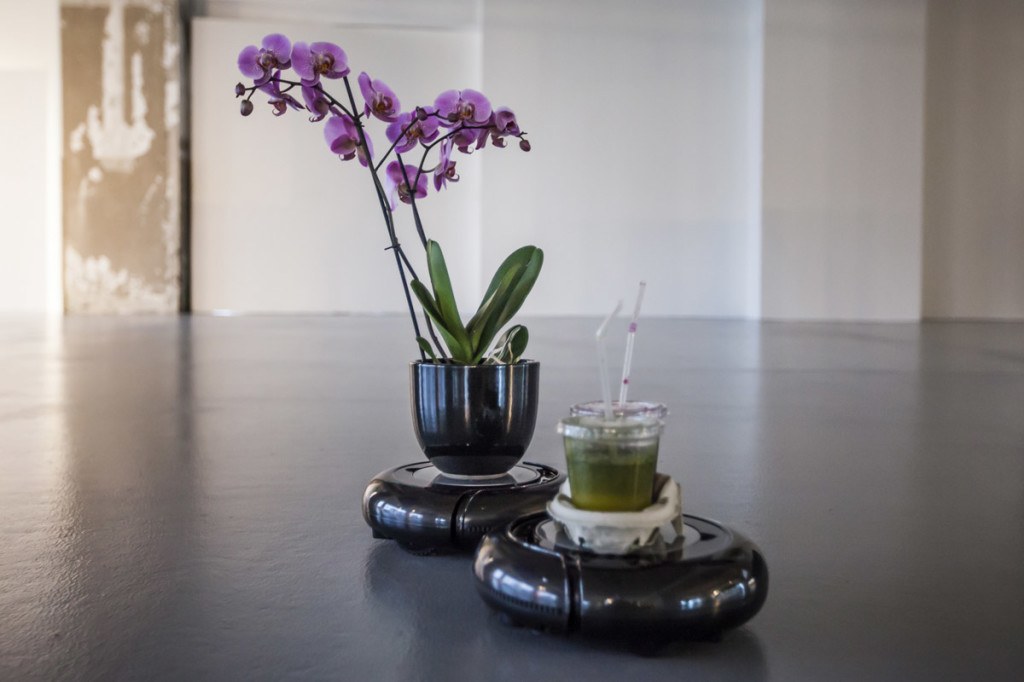 The central element of Sascha Pohflepp’s video Recursion is a text about humankind, generated by an AI and recited by performance artist Erika Ostrander, creating a feedback loop between the “artificial other” and ourselves.

Nicolas Maigret’s and Maria Roszkowska’s Predictive Art Bot makes predictions about future art movements and proposes corresponding projects. After their bot was released on Twitter, an open call invited art project proposals and the winning choice will be realized within the context of the exhibition. 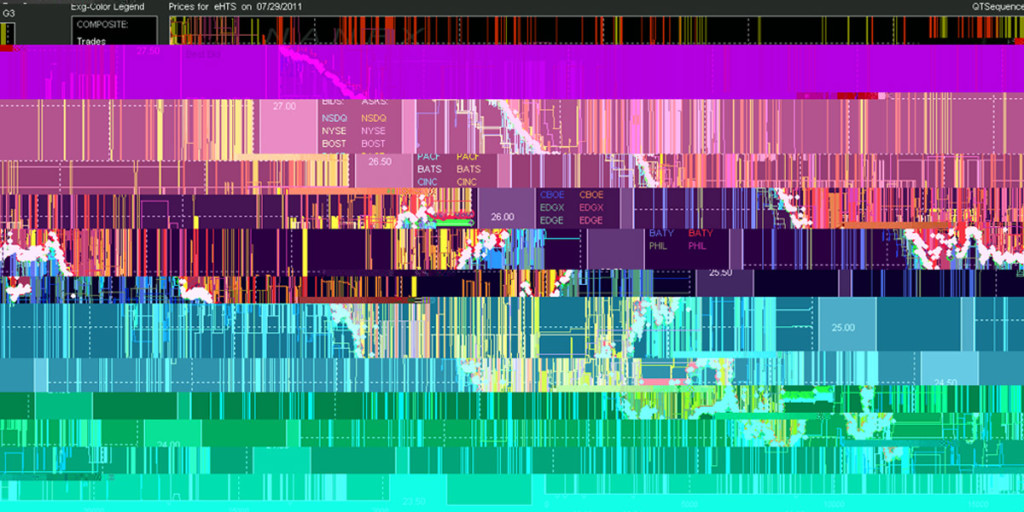 In her work, HFT The Gardener, Suzanne Treister deals with the world of high-frequency traders, operating on the stock markets with special algorithms, so-called trading bots. Treister’s protagonist develops an obsession while monitoring stock prices as they flash by across a screen: With the aid of psychoactive substances the trader attempts to merge his consciousness with the intelligence of an algorithm, so that he can experience the world from its perspective.

Among others, Joep van Liefland deals with the topic of plastics. His monumental sculpture Video Palace #44 – The Hidden Universe, consisting of tens of thousands VHS tapes, evokes the hidden universe of the 1980s home viewing culture. 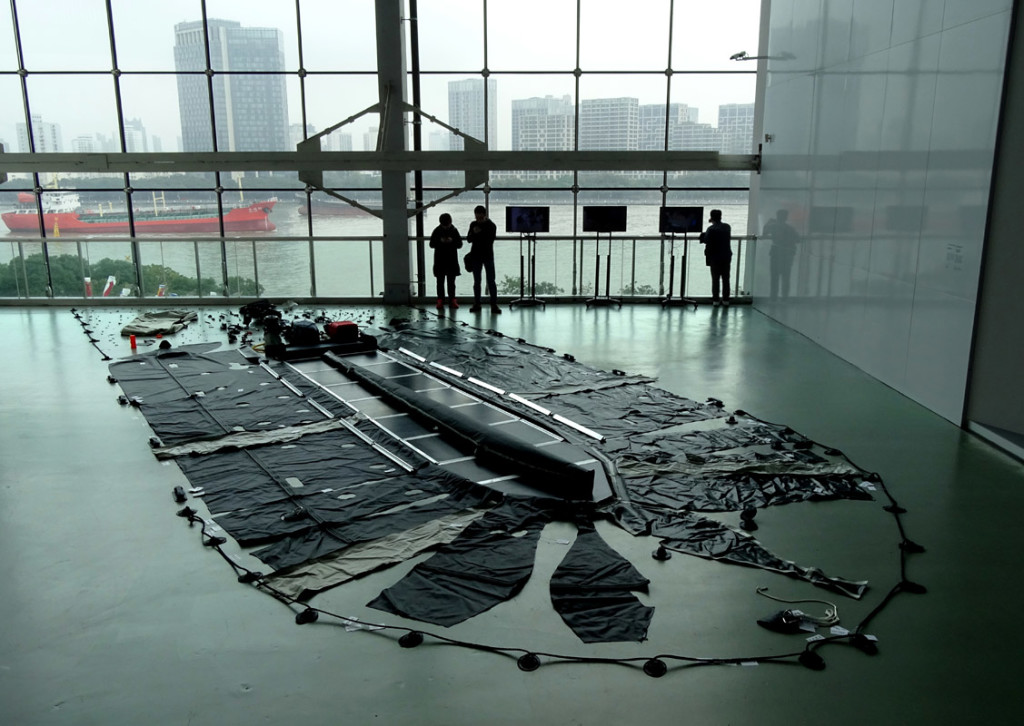 Within the scope of their project Plastic Raft of Lampedusa the artist duo YoHa (Matsuko Yokokoji and Graham Harwood) dissects a rubber raft: the artists look into the circulation of economic, material and human streams affecting one another.

Addie Wagenknecht addresses the Internet of Things with three robot vacuum cleaners that cruise the exhibition. Apart from their initial function, they serve as Wi-Fi hotspots, Tor browsers or signal jammers.
The rocking movement of the electric baby swing in Katja Novitskova’s Swoon Motion, eerily appears human, and in Mark Leckey’s video GreenScreenRefrigeratorAction, a monolithic black smart fridge ponders about its existence in front of a green screen. 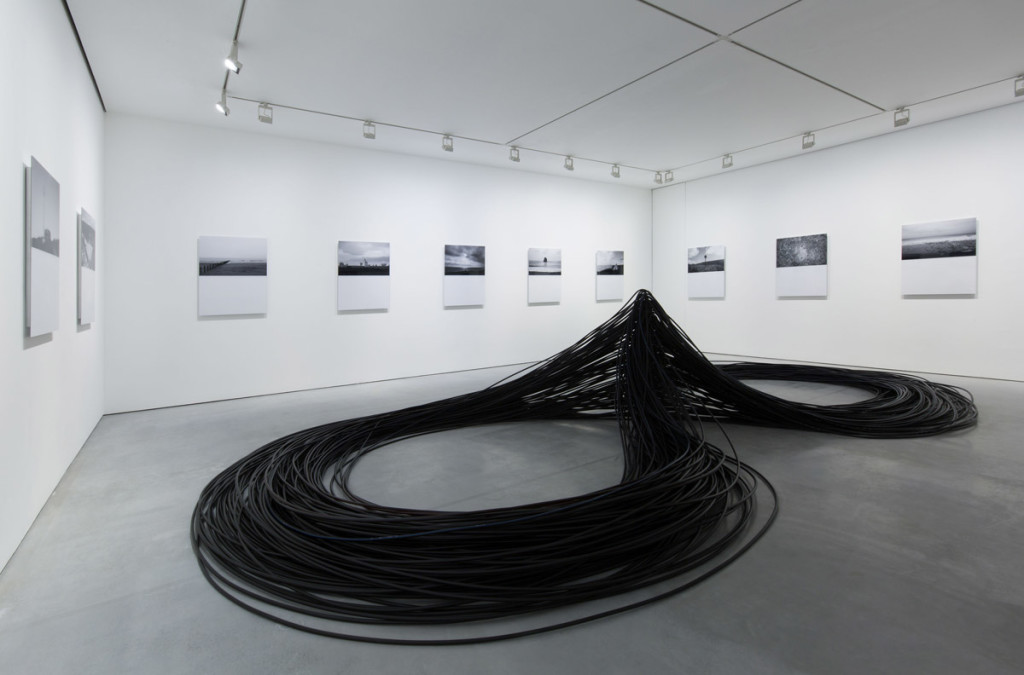 Evan Roth’s large-scale sculpture Burial Ceremony, made of 2 km fiber optic cable, focuses on hidden infrastructures. The sculpture is based on Roth’s journey to Cornwall, one of the first sites for laying transatlantic deep-sea cables between Europe and the US, which currently transfer 25% of worldwide data traffic.

Similarly, Jeroen van Loon deals with the cabling of the world. In his installation, An Internet, he questions how the Internet might look if data were ephemeral. Van Loon ironically shows the vision of a future Internet producing data for brief moments of transmission before it vanishes forever.

Furthermore, included in the exhibition is WorldWideWitch Protektorama—a fictional identity and hysteric-subversive drag character of artist Johannes Paul Raether. Protektorama examines human obsessions with smartphones, looks into wearable devices as body prostheses, and addresses “materiality, fabrication, metals and mines of information echnologies”. Protektorama became widely known in July 2016, when she brought the harmless metal gallium into the Apple Store in Berlin and turned it into liquid, which led to a police operation on Kurfürstendamm. The figure belongs to Raether’s performance system Systema identitekturae, developed since 2009. (from the press release) 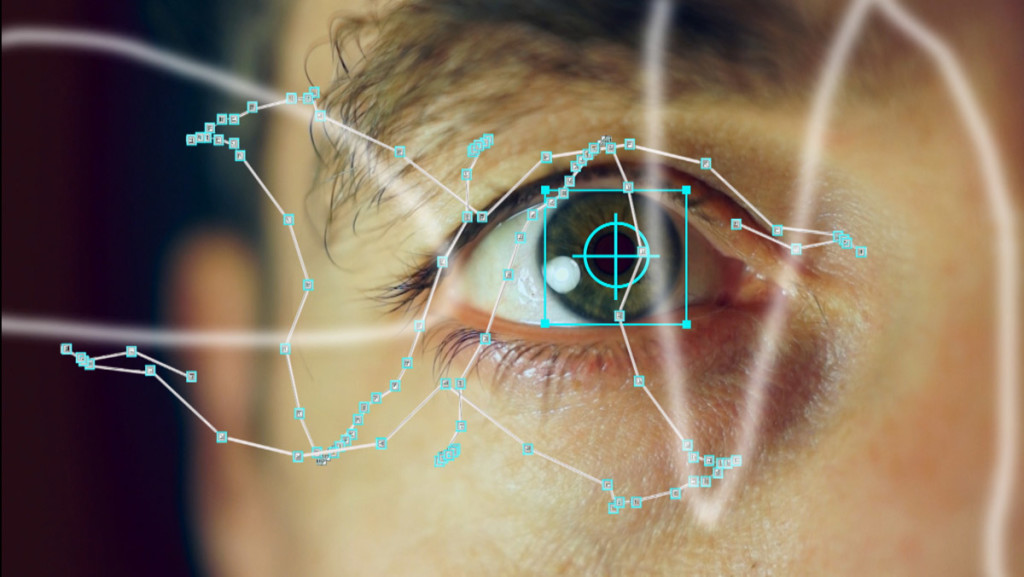