U*, the project - Manifesto by CRiB recounted through an experimental interview in three acts

by Valeriana Berchicci
in focus, Interview

Paragraph Four: the theatrical set and the body

In this section, which is drawing towards the end of the discussion, I would like to focus on the show’s visual aspects and production techniques.

The selected images accompanying this article mark important passages in the show’s development.

To begin with, the set appears aseptic and completely white. Then images are slowly projected on the screen and pop lighting techniques used. Looking at the selected images you can see that the space also contains a microphone and a table on which various objects and snapshots are gradually placed.

The actress gets dressed and undressed, taking on different forms – a teddy bear, Beatrice Fedi, a white mannequin – or removes her clothes revealing her sexual identity.

You can recognise a familiar image – a Rorschach inkblot – among those shown. At one point during the performance the actress requests the audience to intervene, inviting spectators to express an opinion on what each of them sees. During the evening I attended many people participated with a range of comments.

In two images, which I personally requested, you can see how the space takes on a shade of intense blue and the face of the actress appears inside a screen. This is the simulation of a Skype call that I was talking about in paragraph two. I notice the attention of the audience is directed towards the screen, watching the scene from U*’s perspective while U*’s female friend, inhabiting an invented world, is recounting what is happening in her life. A powerful overturning of roles takes place, but the most interesting aspect is that the actress does not leave the stage, she is simply sitting in a corner next to the table, with her face close to the surface. Thanks to a small camera, a microphone and a connection between electronic devices, the director allows us to experience this exchange of roles.

In the image which shows words being projected on the screen, the centrepiece is the body and the gestures of the actress who, wearing only a transparent raincoat, performs these robotic-like dynamic movements to the rhythm of the words being projected, which are also transmitted by loudspeakers on the stage.

VALERIANA: Who is the audience of the project? And, how does the interactive mode of the audience contribute to the show?

During the show, the audience present is repeatedly invited to intervene, creating an open mechanism that, to a large extent, mirrors our creative processes: in the preliminary research phase, before the writing and the staging of the project, we realised that we needed to be open to the opinions and stories of others as living material for the show, to avoid final assumptions and one-sided answers. For this reason, this project is addressed to all those who have enabled us to question ourselves and who have stimulated our curiosity by allowing us to learn.

Finally, U* is a gift to ourselves, the privilege of studying – in depth and with no obligations to respect – a theme that is important to us, creating something together (inside and outside the collective), with all the challenges and achievements this entails.

«We strongly support the use by the gender non-conforming community of a whole range of terms to describe themselves individually”, stated Bernard Reed, a trustee of the British Association Gires (Gender Identity Research and Education Society), and reported in the British newspaper “The Independent”, adding that “it’s interesting that they have chosen to describe people outside that spectrum as cisgender, which is not a term that cisgender people have chosen for themselves. Gender non-conforming people need cisgender allies. Some cisgender people have for many years been staunch advocates of the rights of gender non-conforming individuals and it is heartening to see that many, many more are now respecting their identities and entitlements to equal treatment.”

According to the Oxford English Dictionary, the term cisgender first arose at the end of the 1990s and recognition in the official language aims to demonstrate a greater social awareness of these themes, increasing interest in gender diversity.

The inclusion of the term cisgender, in the Anglo-Saxon world to begin with, helps to change the cultural perspective and, in particular, the perception of transgender. By also classifying who is “cisgender”, in fact, there is no longer the need to speak of “diversity”, of transgender communities as opposed to a majority of “normal” people; for this reason, the removal of a point of reference establishes two perfectly equal categories.

The two terms, cisgender and transgender, emerge from the Latin prefixes “cis-” and “trans-”, which mean “on this side of” and “beyond”, respectively. They can be found, for example, in geography, as the same Oxford English Dictionary explains: cisalpine and transalpine indicate a location situated on one side or the other of the Alps in relation to a specific observer. Those who fully identify with the gender and sex attributed to them at birth, which are recorded on their documents, are “on this side”, they are cisgender, while those who feel they do not fit, probably choosing to start a transition journey towards the gender they identify with, are transgender. 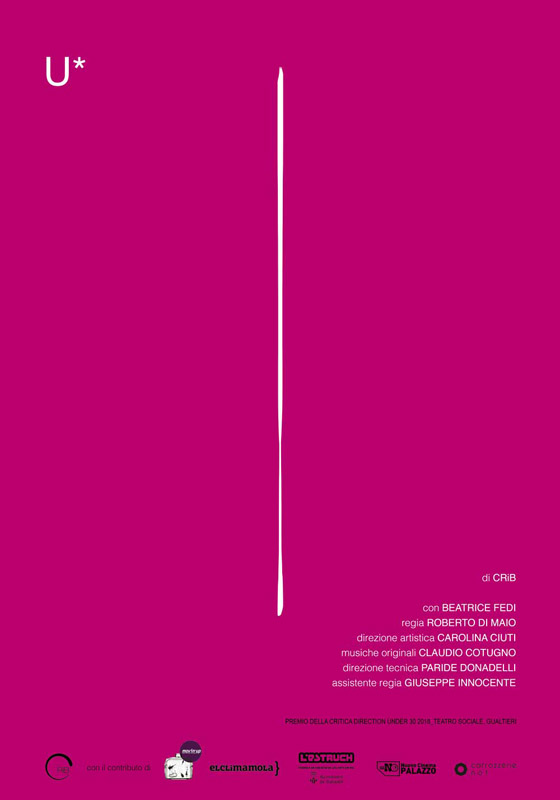 VALERIANA: How did a group of young people manage to develop a project like this, also in economical terms?

BEATRICE: It all started when we won the competition “Movin’Up 2018”, supported by Mibact and GAI. That great little money prize allowed us to start the production and travel to Spain, to Sabadell close to Barcelona, to be precise, and work in residency in a magical space: “L’Estruch”, with the support of the production house Elclimamola. In the months that followed, when the prize money ran out, we started to invest in the project personally and have continued to do this with conviction. When you believe in a group or in a project, you give it everything you can… from money to time and energy.

During the process we came across other Roman spaces that supported us. First, the Nuovo Cinema Palazzo welcomed us for two weeks and allowed us to breathe an air of total liberty and creativity. After these two weeks, Carrozzerie n.o.t. opened its doors to us a few days before the performance. This was because Maura Teofili and Francesco Montagna, being the attentive and sensitive people that they are, understood our need to experience the space to find the best stage production.

The collaborators who chose to “partner” our show without being paid also played a fundamental role. Starting from the beautiful music by Claudio Cotugno which makes the experience of the show immersive and personal; the tireless support of Giuseppe Innocente who actively took part in the creation and the improvement of a number of scenes; the creativity of Ilaria Restivo who was able to translate all the nuances present in U* in a poetically disorientating poster; and, finally, the huge support of Paride Donatelli, a true magician of “technique” and an artist of light. Thanks to him our ideas came to life and materialised with disarming simplicity.

It’s impossible to put a price on these collaborations, even though we are looking forward to being in a position to do this in the future. U* also belongs to them.

At the end of the show, CRiB, through a paper object, the spectators were asked questions which became a leitmotif: What are you leaving behind? What are you taking with you?

A form of ignorance

The insecurity surrounding a “special” body and a smile

The curiosity in the spectators’ eyes