Adrian Tranquilli in “An Unguarded Moment”

Tranquilli's retrospective conceived as a cinematographic narrative in the new spaces at Fondazione Musica Per Roma, curated by Antonello Tolve

Adrian Tranquilli’s super-heroes – salvific icons projected into the contemporary world, charged with modern symbolism – have been ‘signed up’ for a new narrative that comes to life in the spectacular retrospective curated by Antonello Tolve at the Fondazione Musica Per Roma.

They shape from a rich cultural imagination rooted in cultural anthropology and nourished by all kinds of knowledge and a passion for cinema, music, literature and mythology. These protagonists are recreated in a story that comes to life in the space and alongside it.

Accompanied by a soundtrack originating in a song by the Irish post-rock band God is an Austronat, we climb the first ramp of the garage which has been converted into an exhibition space and find ourselves facing the imposing sculptures of In Excelsis. Their impressiveness moves us and welcomes us inside. The narrative is divided into nine episodes in a non-chronological narrative, which is imagined through associations between distant works and times.

Each work and each room is an apparition in a cinematic play of light and shadow.

The video that gives the exhibition its title, An Unguarded Moment, opens the story. Presented for the first time in 2019 at Studio Stefania Miscetti, which has followed and supported Adrian Tranquilli’s work since the first half of the 1990s, the video, conceived as a meta-film, comprises much of Tranquilli’s world – not only its symbolism but also his method of working. It is a film of the film. With the help of clips from classics starting with silent films[1], Unguarded Moment explores the duality of man and woman, the unconscious and conscious, the imaginary and real. At the centre of the scene the shadow of a female angel and that of Batman face each other in profile, while a story concerning two other figures can be seen in the background, possibly representing their alter egos projected in an interweaving of meanings and symbolic references. 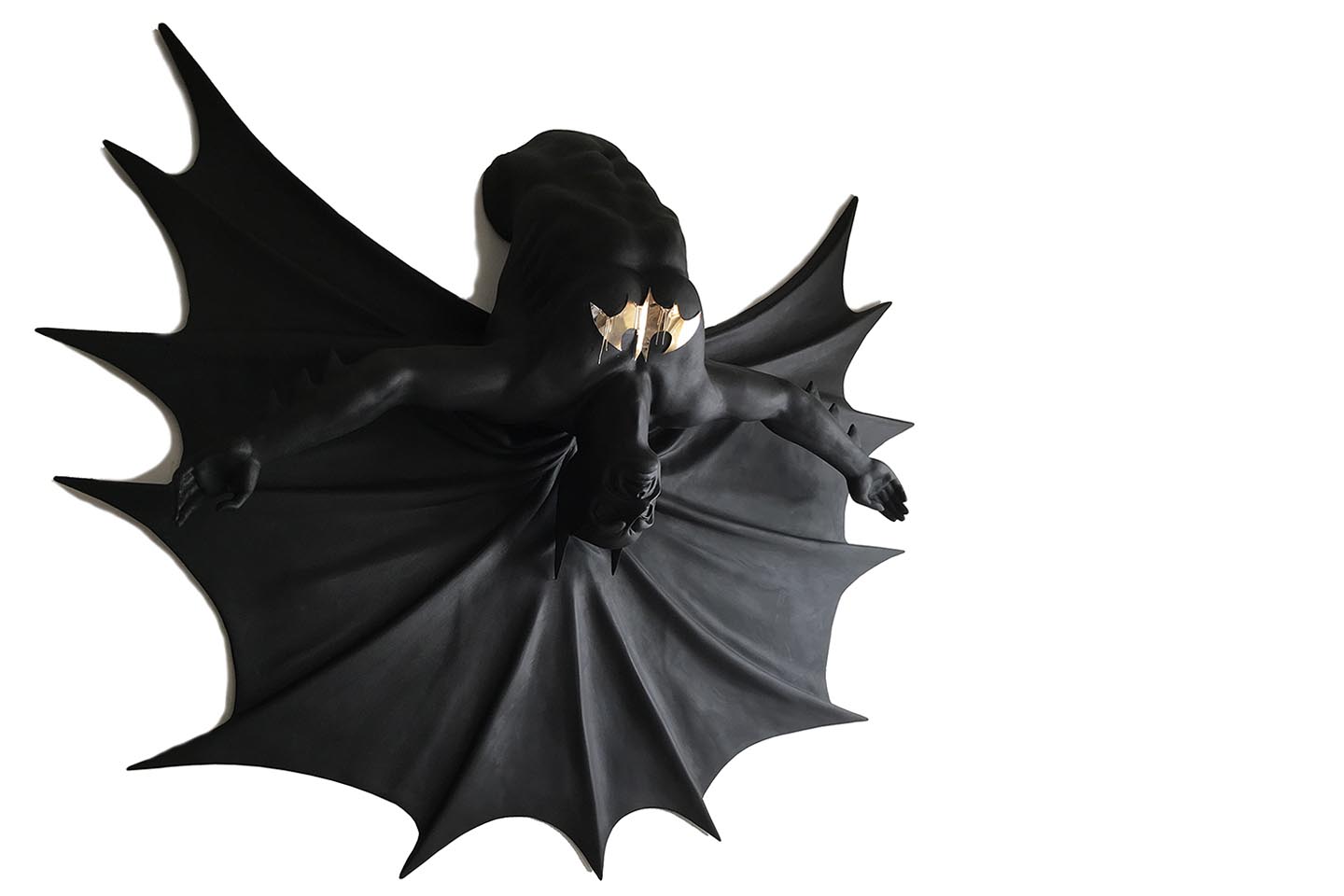 Music has always been present in Tranquilli’s research, compressed in the titles and phrases of pieces that give names to all the works in his production. An Unguarded Moment is also a track from the 1980s band Church. This unguarded moment represents the beginning and synthesis of the narrative. “An Unguarded Moment, explains Tranquilli in an interview for Segno online with Maila Buglioni (https://segnonline.it/an-unguarded-moment-intervista-ad-adrian-tranquilli/), is the moment when the wall of what is obvious collapses, for a moment, and reveals itself. It is the moment when the veil of what is presented as the principle of reality is removed and collapses. And maybe, maybe you finally get a glimpse…” 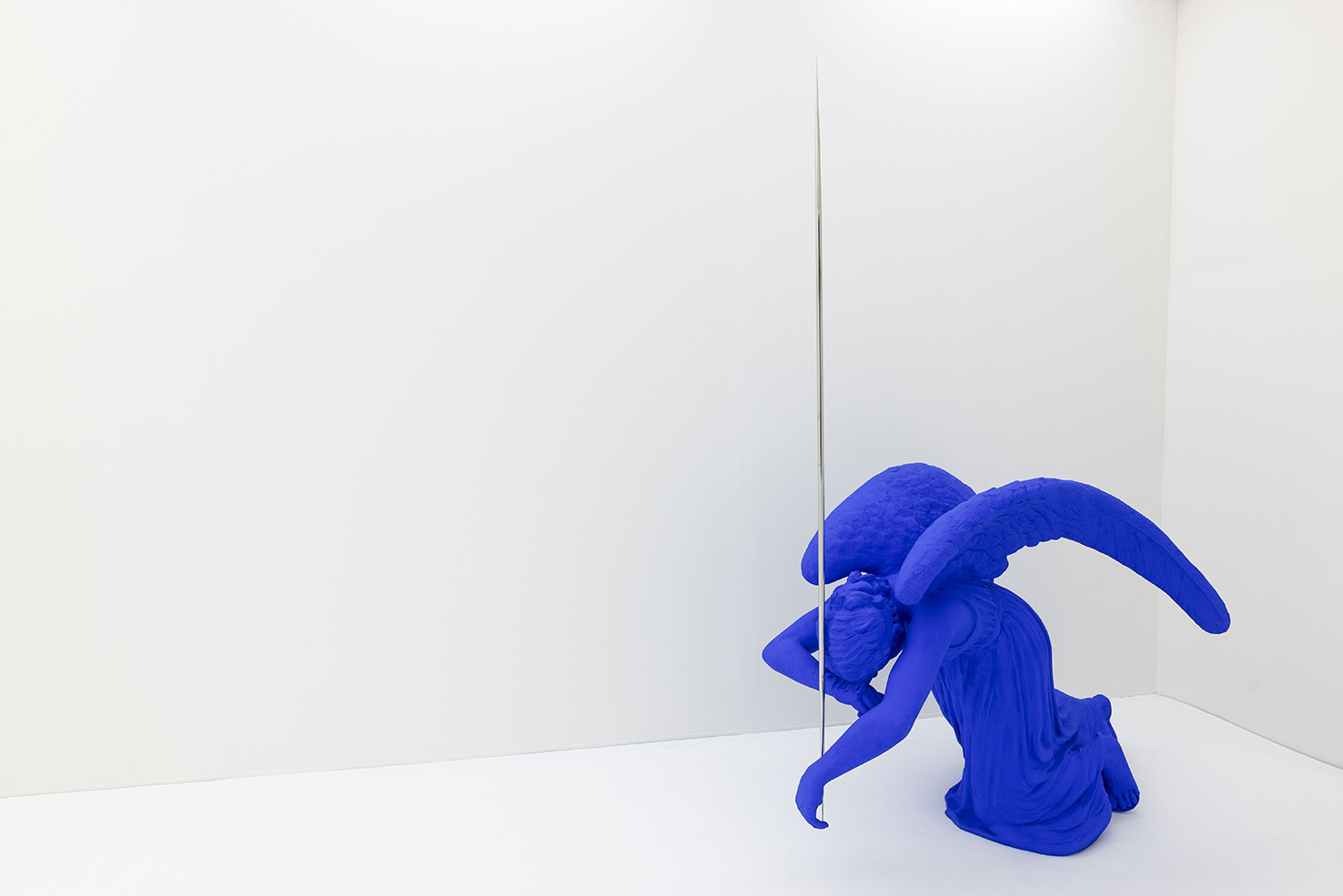 The journey into the duality of man and the world is also a journey into the matter and forms that shape Tranquilli’s heroes. They come to life in a process gathering together different symbols stratified over time. The tension of this cultural richness spreads out in the material, reconfiguring itself in shapes that can always be recognised. Matter is also the music for the first time complicit of the narrative.

In the second room, another figure emerges from Tranquilli’s imagination: the angel; the one of Fly (Vola, 2019) captivates the visitor with its Klein blue from inside a notice board. Reclining in a downward direction, the angel holds a pole, a reference to De Dominicis and his quest for immortality. The eternity projected by the golden colour of De Dominicis’ poles now fades into steel, the material symbolising industrialisation, the promise of immortality reversed in its senselessness with both points facing two directions, not only upwards.

Death and redemption. Here they can be seen again in the appearance of the angels in Today is Liar (2019). Upside down, hanging from the ceiling with their arms folded, they blend into the darkness, where their faces can be glimpsed, while the golden colour of the brass of the trumpet and the lips of the angel. 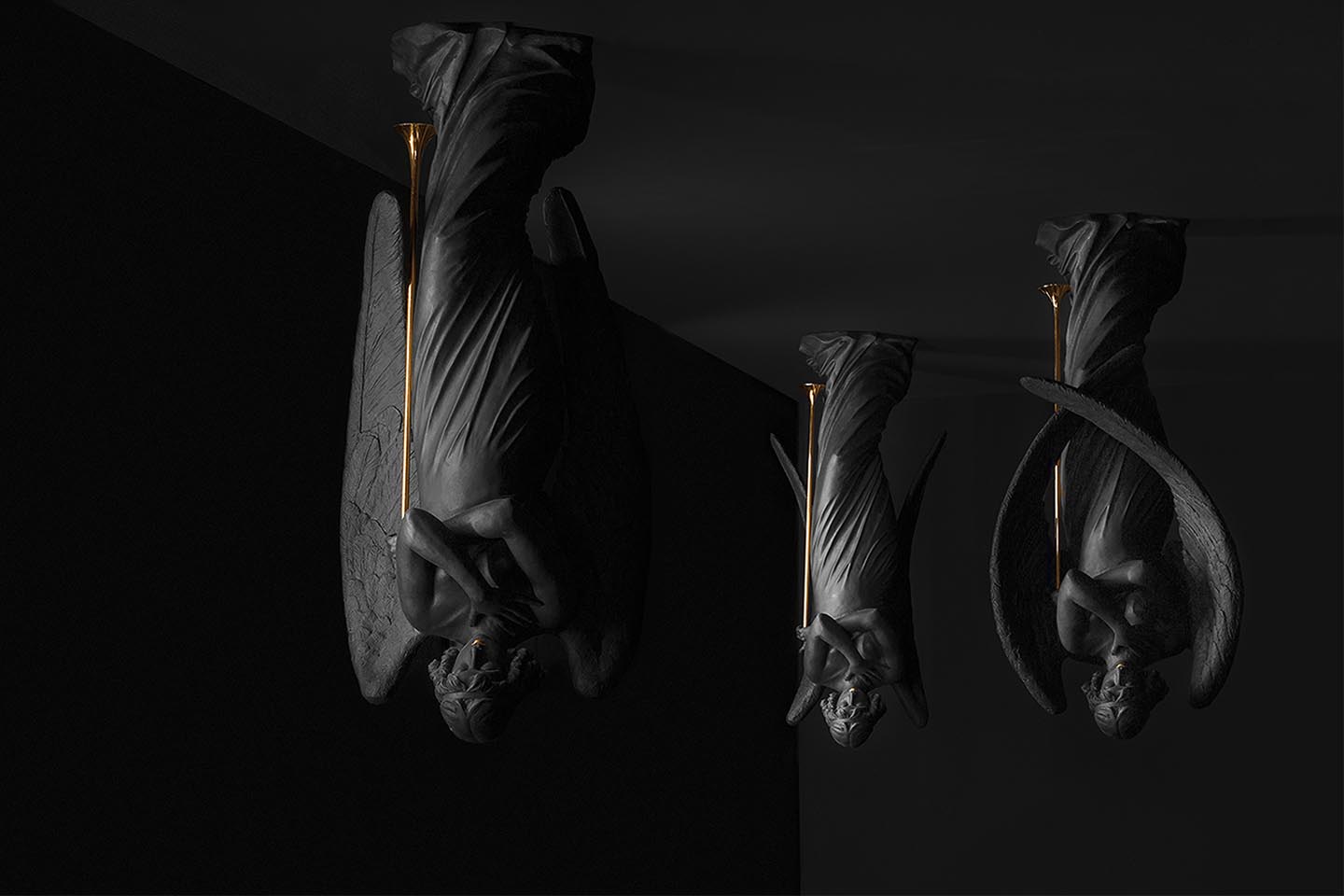 The monumentality of the power vacuum in After the West (Dopo l’Occidente, 2014), where a throne is at the centre of four twisted columns built from repeated models of masks, faces the older video, Don’t Forget the Joker (2009). Here, once again, superheroes tell of the dualism between people and power, between hero and anti-hero – Batman played by Adrian Tranquilli and Joker by Achille Bonito Oliva – in a setting that opens with St Peter’s Basilica.

We look closely at the masks that form the twisted columns, symbols of religious power. The structure consists of masks, a new contemporary myth, at times heroic, recognised in an identity diluted in the collective and by a power dictated by repetition. [2] 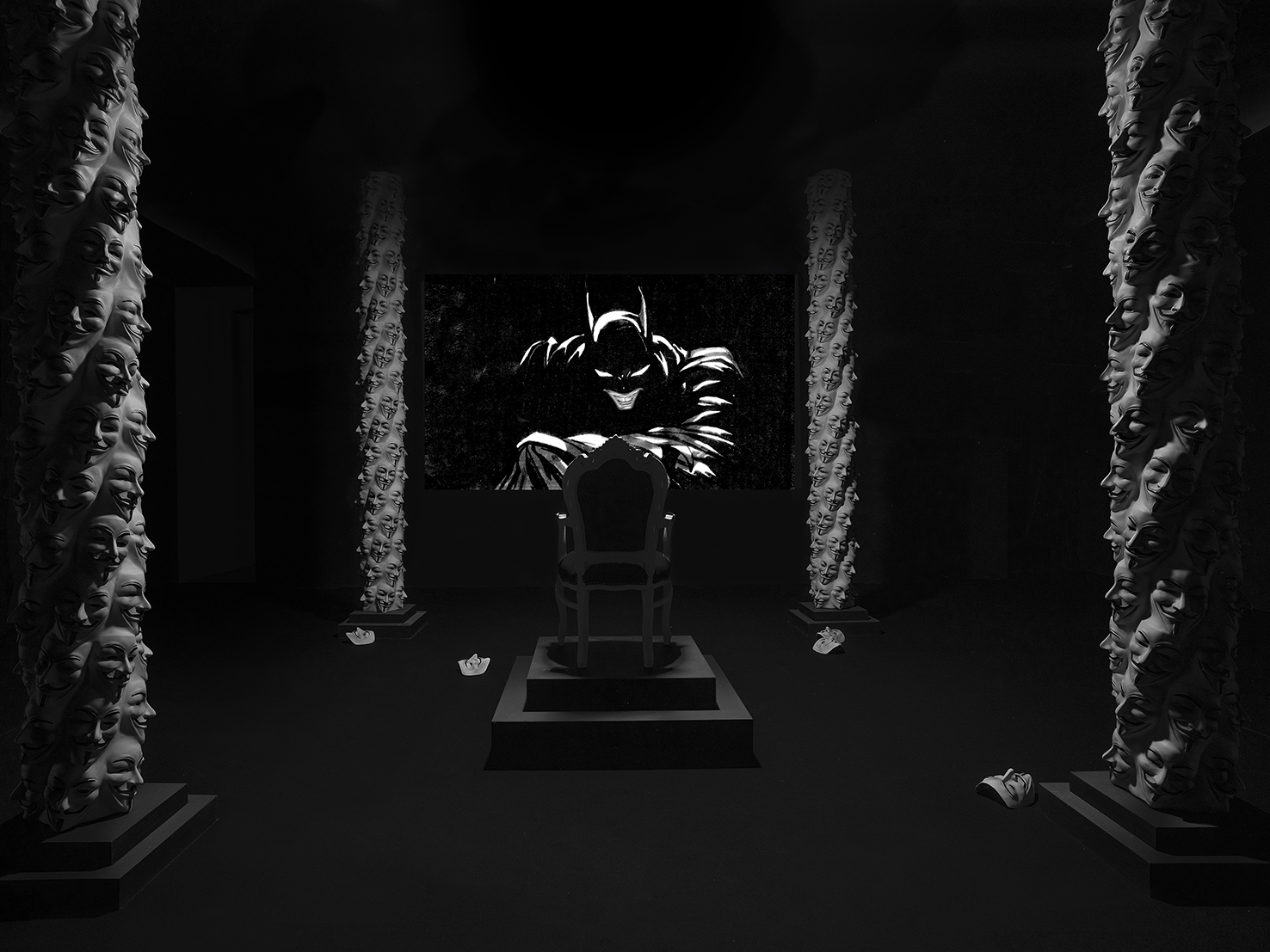 The interweaving of religious symbolism with that of other traditions returns in the next room where, in the drawing In Excelsis 6 (2011), Batman is framed by a cross that continues in other contemporary symbols, followed by a swastika that, rotated to the left, in Hindu culture alludes to the destruction of obstacles, advocating evolution. 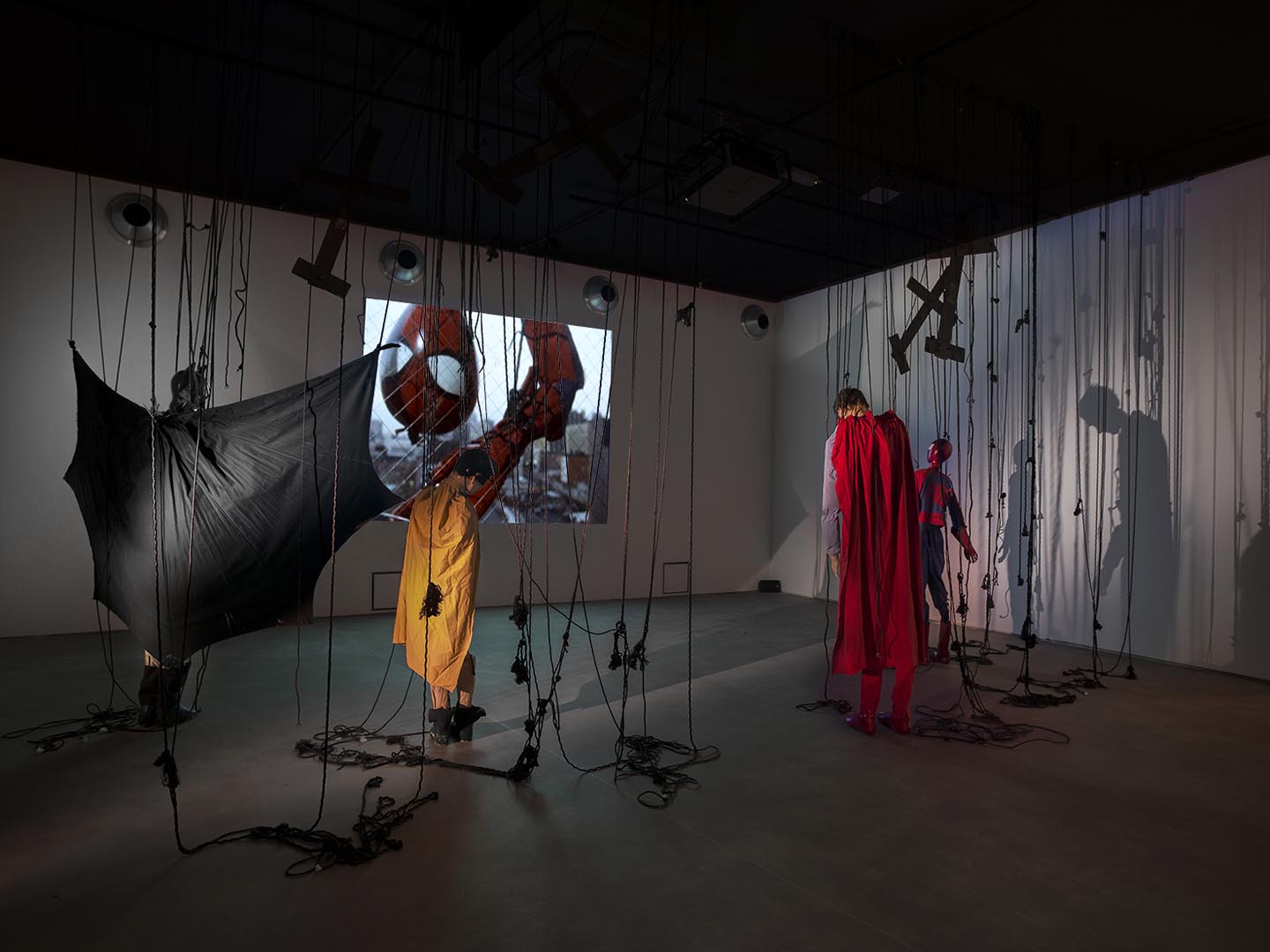 We move forward through a series of rooms where heroes appear in different poses and narrative combinations.  We met them again in the room of These Imaginary Boys (2004), defenceless, hanging from the ceiling by wires reminding us of those used by puppeteers. The backstage is revealed. Iconic power is manipulated by man until it is myth manipulating man. 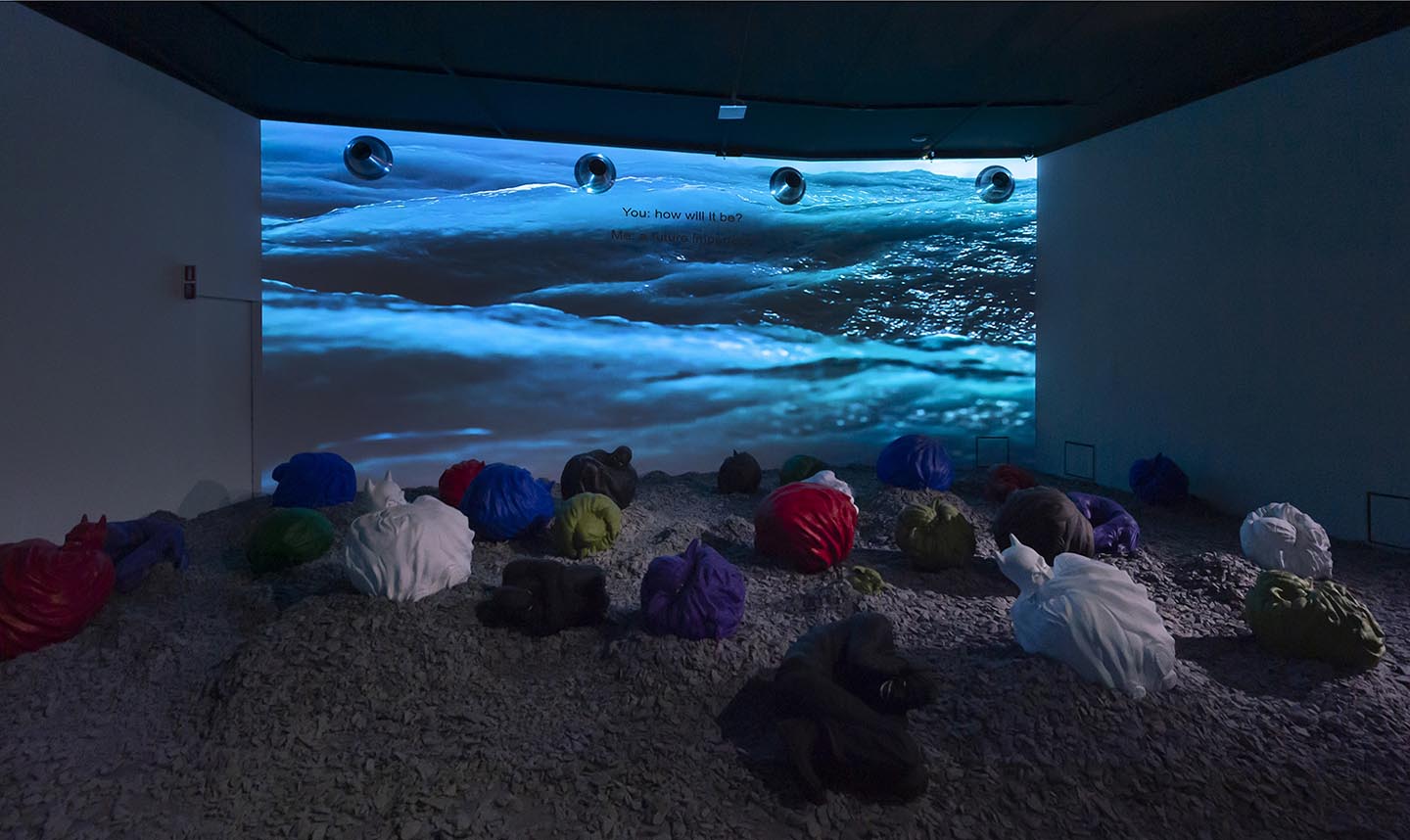 In the last room Batman, Superman, Spider-Man, Yoda are crouching down on a reconstructed shoreline like one in a film set. The sea moving in the background projection and the same soundtrack that greeted us at the entrance to Batman’s cave, accompany the end of the story projecting us in the duplex feeling of being in between film and reality, but also in between an end and a new start.

[1]The Man Who Laughs by Paul Leni (1928) based on Victor Hugo’s novel with the same title, The White Sheik by Federico Fellini (1952) and Les Vampires, a cine-novel by Louis Feuillade (1915)

[2] In this case it is the mask of the hero of the 1988 graphic novel V for Vendetta by Alan Morre and David Lyod, symbol of the We Are the 99%,  an anti-system protest movement.

The exhibition will be followed by the publicatinn of a monography published by Maretti Editor with texts by: Sergio Brancato, Raffaella Franscarelli, Antonello Tolve, Eugenio Viola.