A creative device that completely reveals reality, making light of history and offends common sense to display the ghosts of our collective memory and demolish the world of imagery in order to create an abnormal art itinerary – the kind of art that feeds upon Masonic and Rosicrucian echoes as well as on symbolist, philosophical, psychoanalytic and magical references. The aesthetic parable that Vettor Pisani addresses stands upon an alternative behaviour of art that dismantles, unsaddles and masquerades things to give them a new sense. His work is made of glances translated into visions, representations transformed into epiphanies, revelations, apparitions of beings, things and nearby and distant shapes in terms of time. 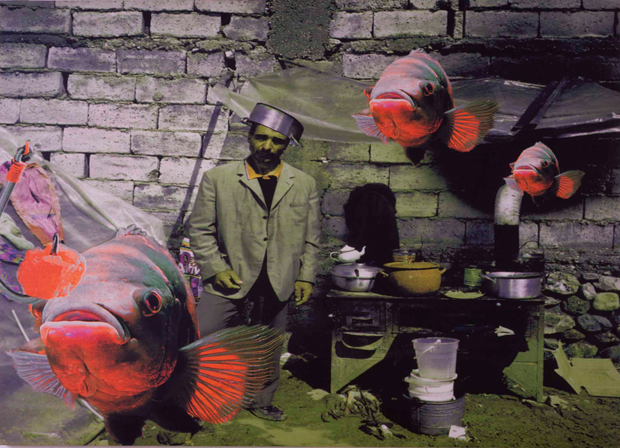 Born in Bari in 1934 (although he had always made a joke of his origins to create a kind of tailor-made biography – «the son of a Navy official and a stripper born in Naples in 1934» was the artist’s choice of presentation in 1985, «architect and bricklayer, Rosicrucian: 17 th Degree of the Ancient and Accepted Scottish Rite of Free Masonry, born on the island of Ischia» was published in a 1991 catalogue printed for the Thirty years of Roman avant-garde  exhibition), Vettor Pisani felt the need as an artist to combine photography, sculpture, installation and performance in order to investigate the world of life with the necessary intelligent irony as he approached the theoretic space of art, the international cultural device, the theatre of naked human cruelty, uncapped, inhabited by ideas, desires and illusions. 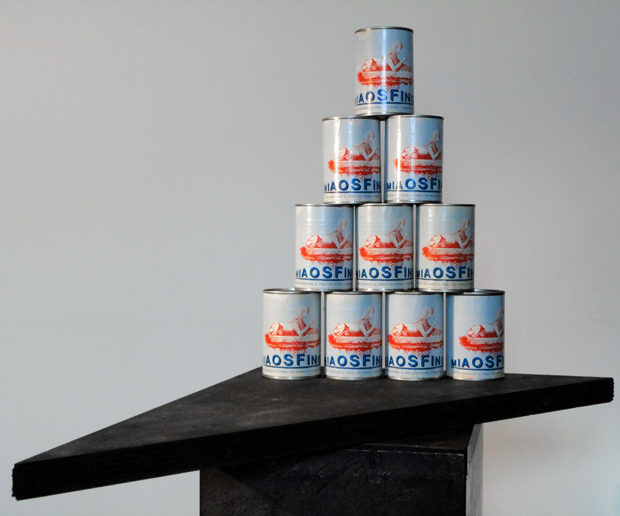 Branching out from what Filiberto Menna defined as being «a critical argument entrusted to images», a «work as a critique» to be exact, Pisani already revealed in his earliest creative manoeuvres the clear intention to develop a programme which «strikes art by using art» (Calvesi). In fact, the artist is «naturally critical, implicitly critical due to his very creative structure» (Lonzi), with an intromissive desire to reinterpret, translate and betray art (some of his imaginary friends were Marcel Duchamp, Piero Manzoni, Yves Klein and Joseph Beuys) through art’s very own tools.

«I displayed objects that are similar to words for an art critic –  the artist declared during his first solo exhibition,  Male, Female and Androgynous. Incest and Cannibalism in Marcel Duchamp – hosted at the Galleria La Salita in Rome. «I did an exhibit in critic Marcel Duchamp’s style: a critic who uses the same thoughts, same means and same language of artists to talk about them.» 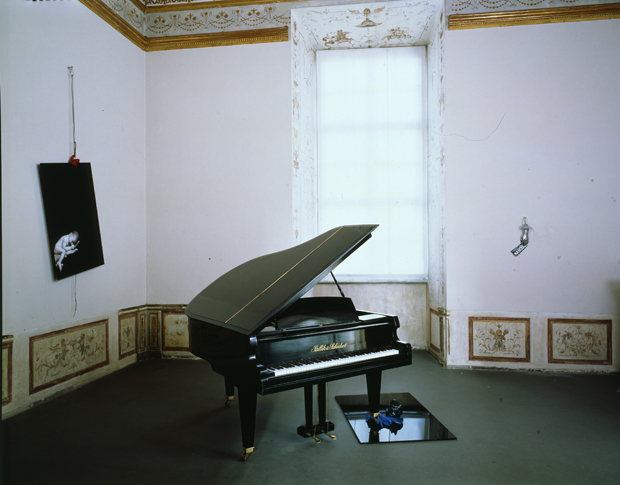 Ever since his debut in 1970 (as a more mature artist who just came out of nowhere), Vettor Pisani earned national and critical acclaim (among other things, he won the second edition of the Pino Pascali National Award in 1970 presented to him at Rome’s National Modern Art Gallery), displaying extraordinary projects that were agonizing and catastrophic (Tale of a Catastrophe is a  2011 work) and iconoclastic – a weight for athletic exercise Suzanne in a chocolate cast (a head of Venus in chocolate), Ground human flesh (ground meat wrapped in transparent plastic) and Javelin for a chamber hero are only three brilliant examples.

Erotic and exotic, sensual, satirical and passionate, dreamlike and provocative, chemical and comical, Pisani’s work is found in the appearance of nonsense or the point of no return that drives spectators (and with them, the very system of art) inside an archaic and defiling environment which keeps the rampant and complacent spirit of the renowned avant-garde intact. Between action, presentation and representation, his work is a return trip to Greek mythology, the alchemic ritual, esoteric theories and ‘mysteriosophical’ hermetic philosophies, to the history and critique of art, to the Rosicrucian doctrine and a Gothic-Romanesque universe that is «absolutely original and foreign to traditional academic canons» (Bonito Oliva). A return trip that delineates the will to reconstruct a verse which feeds upon the world theatre through Being and Time. It was to the theatre – a place of initiation and metaphor in which archetypes of the collective imaginary, symbolic and legendary references converge – that Pisani dedicated a series of aesthetic and theoretic studies in the 1970s. These studies transformed his opus into a never-ending reflection on art within a symbolic frame and a kaleidoscopic edifice filled with the stories that dwell in our minds. 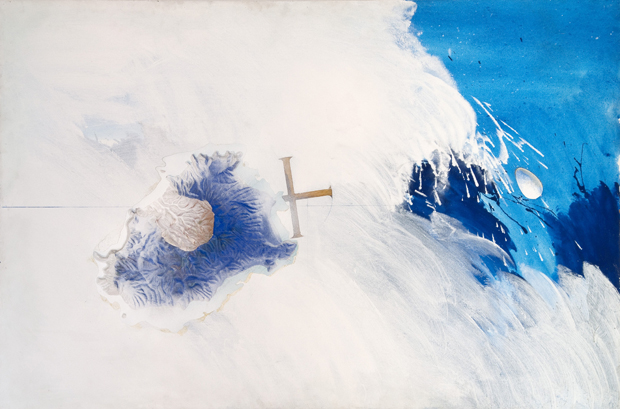 Pisani presented The Rabbit does not like Joseph Beuys at Rome’s Galleria Sperone in 1975. He was invited to the 37th Venice Biennale the following year where he launched his Theatrum project which was to become the prelude to a cycle of works (The Theatre of Oedipus, The Theatre of the Virgin, the Azure Island, The Theatre of the Sphinx, The Crystal Theatre) that would continue throughout his career. It is here that art would become “the manner and measure with which humans oscillate between the presence of the question and the absence of its response” (Bonito Oliva).

The MADRE / Museo d’Arte Contemporanea Museo DonnaREgina in Naples opened this season with an outstanding retrospective exhibition dedicated to this exemplary artist, Vettor Pisani. Heroic / Anti-heroic  (open to the public until 24 March, 2014) is the first exhibition since the tragic death of a man who was accomplished to the point of transforming art into a critical process, into intellectual play and a scholarly dance, into mental activity and into a labyrinth of thought, meditation and silence.

The exhibition opens on the ground floor in a room christened Re_pubblica Madre by the museum’s new director Andrea Viliani. This room is dedicated to music, obsession, and the artist’s relationship with his lifetime friend and colleague Gino De Dominicis (the 2007 Invisible Concerto by Gino De Dominicis is unforgettable!) and to the end of ideological odysseys, to liquefaction and disorientation. The exhibit, curated by Andrea Viliani and Eugenio Viola (Laura Cherubini is curatorial advisor), proposes an exclusive journey that departs from Naples. From a «place of the spirit, of intelligence and knowledge» (Viliani) – a familiar environment to Vettor Pisani -, a space that had been revisited through the power of his imagination and rethought with an all-encompassing sense of belonging. 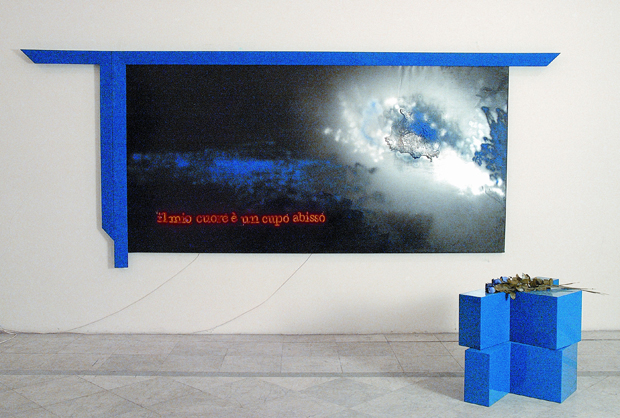 The exhibit continues on the third floor of the museum (the other floors are dedicated to a collection about Naples and its artistic heritage), avoiding any kind of chronological order so that museum guests can be immersed in an intense phenomenon that follows a thematic organogram uniting fantastic obsessions and recurring motifs that return rejuvenated and adjusted with a quality which extols life and death, the divine and the profane, history and that which is not history. From the first mental room of the exhibit which hosts some visual models in a way that is suspended in time and another chamber of the hero  (The Chocolate Venus) – the central work at Pisani’s solo exhibition at  Galleria La Salita – the exhibit gradually unwinds through luminous halls illustrating Virginia Art Theatrum (Museum of the Catastrophe), his islands,  organics, drawing and transparency, his The Slide project (a sort of track for the eyes as suggested by Mimma Pisani, who has followed this precious event passionately) and the declensions of plagiarism, Eros (the virgin and the porno star) and his unfailing irony. The itinerary seems to find its conclusion in the former Project Room hosting his 2005 Azure Peacock: an environmental installation made up of semi-crosses, a metal philosopher’s stone, mirrored tiles and 2 peacocks. 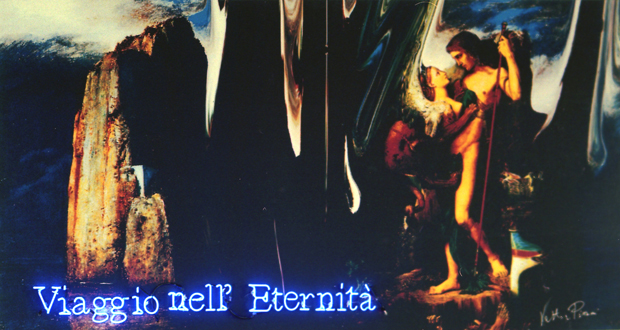 This retrospective exhibit also promises the simultaneous parallel experience of a Programme of (re)performances (curated by Eugenio Viola. Viola is also presenting To_form a collection, the project’s second step, in collaboration with Alessandro Rabottini): three actions performed by Pisani between 1971 and 1975 are being exhibited for the first time – The Slide (reproduced on 20 December for the exhibit’s opening), The Rabbit does not like Joseph Beuys (scheduled for 7 February) and Androgynous – human flesh and gold (scheduled for 24 March). The goal of these performances is to restore corporeal presence, together with the cold traces of photography and video, to a behavioural moment of art and to what once was and can never be again.

Meanwhile, the second volume of the exhibition (same title and same curators) will be inaugurated on 27 January at the Teatro Margherita in Bari. The analytical outfitting connects artist’s real city (Bari) to his ideal city (Naples) to display another collection of works – the unparalleled Melanconica pot. the world’s fastest turtle (a reconstruction of the original platform used during the 1970 performance at Castello Svevo in Bari – complete with live turtles and mice – in a work created for the Pascali Award), A trivial man is not an anti-hero (1976), Journey into eternity (1996), The Anatomic Table of Isidore Ducasse (2008) and Europe, the Laboratory of Madness (1999) to name a few – which further illuminate the stage for a special and dynamic artist who proved capable of putting critics «on a diet» and who invented a new, intense and concrete way to theorize throughout his career, unexpectedly cut short on 22 August 2011.