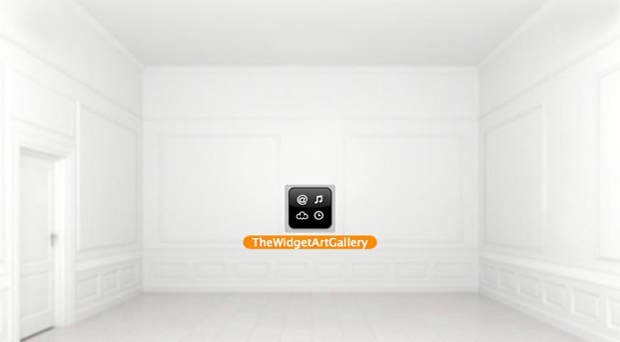 Widget Gallery by Chiara Passa is the first of a series of focus, dedicated to the changing art spaces that are transformed and transfigured under the influence of technology. Chiara Passa is an Italian artist who has found her ideal creative dimension in multimedia. Her works come to life in animations, video installations, interactive projects, video-mapping, as long as other means tickle her creative curiosity.

The Widget Gallery is a portable gallery that Chiara Passa materializes in the ubiquitous space of mobile technology in 2009. The gallery is still active as an exhibition space that houses works ad hoc by international artists invited monthly.  No address or fiscal code. It’s a n application that can be downloaded very easily on iPhone, iPod touch, or even in the computer Dash Board.

The term ‘widget’ that defines the gallery, in the computer language indicates a certain type of applications that can be imported and executed easily within a web page. These applications also take shape in calculators, calendars or weather graphics which are on every desktop. In this way, in title’s definition,  space is identified with the application that generates it.

The widget Gallery looks like a classic flavor room. In this small space, or in this very small reconstruction of a universe –  depending on your point of view – the artist becomes architect, gallery director, curator, agent of works and estimated artists that ‘cover’ the world everywhere, but also jealous collector and archivist. Everything is intertwined in a interconnected speech that is rich in cross-references but which is made simple through visual immediacy and interaction. The shown works are made in different formats: audio, video, zip packs and server side procedure, and animated gif, a format, the last one, privileged for its multifunctional nature, easily interchangeable between videos, photos and simple static images.The gallery’s structure is built in HTML5, as explained in an interview for the platform Rhizome, “preferred because it combines easily with javascript functions”[1].

The Widget Gallery becomes a  container of experiences, but also content, in defining itself in the very same generative process and in its attitude when selecting works reflect the digital in its multiple facets. The figure of a woman captured in act of waiting in Happening Soon by Roberta Lisca (2011)  becomes a metaphor of time. The collages of gif by the pioneer Lorna Mills become fragments of an artist’s portrait. The bust of a statue by Rollin Leonard (December 2011) represents virtually a never realized idea of a real project, and bends in the room with a flexibility that clearly simulates the latex material, which the artist decided in fact to create models in the analog world with.  Black points bouncing on the walls and on the floor in the work by Manuel Fernandez who explores the concept of the weight (January 2012).

It all make sense in WAG’s Plan Displacement (February 2012) a work this time made for the gallery by the same author. The architecture explodes to reveal the inside part of the processor. The connection’s plot expands his canvas to other contents and the analog world becomes more and more intricate. Twist of fate, after its completion,  this work meets the curatorial choice of Nilo Casares to be displayed at the Centre del Carme in Valencia. It enters into another space like a Chinese box. The gallery, which in mobile devices immerses the viewer in a very large dimension, now returns a different perception of space, conditioned by the boundaries of the iPad that contain it, made ​​visible by its vertical position on the wall, similar to that of a framework.

The tiny space of the Widget with its multiple function and meaning, presents itself in different ways in the space-time dimension, mingles with the changing figure of the author, is swallowed in the virtual world and then is inspected from the analog world through visible boundaries of the device that contains it. This micro-world opens a window that faces the digital universe with its implications that are leading to the shaping of a new vocabulary.