An exhibition-event of performing and multimedia arts, to inaugurate the two-year management of the Mola di Bari Castle

I was a mess eroded by the wind.
Today I am a contemporary castle:
a bastion of artistic research and cultural transformation.

(from the communication strategy statement)

Countrymen, people of the planet!

This is what will happen: men and women, come in.
It is now swarming with champions of art, scientists, free spirits. Assemblies of people will decide what to do,
nights with more music and exhibitions,
I will be an academy for new techniques,
with no master, space and time will be shared.

(from the mission of MAUL!)

On the evening of 9 September 2021 the spectacular structure of the Angevin-Aragonese Castle in Mola di Bari, illuminated by a laboratory project coordinated by the collective NONE, opened its doors to a an exhibition-event of performing arts and media: three days of presentations at the end of a much larger project which also marks the start of a two-year period involving a series of events conceived and organised by Officina dell’Arte Association. 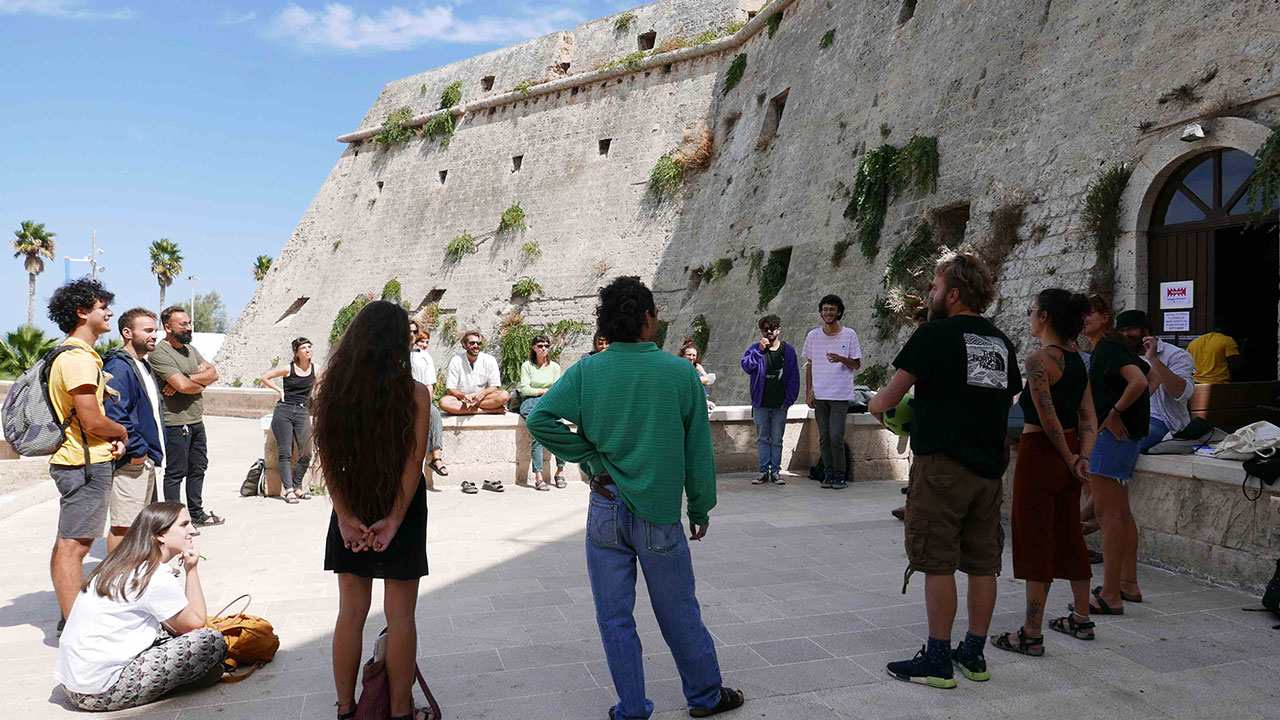 To hold an exhibition-event in a castle, to fill its spaces, not getting lost inside but also informed by the strength of its history represents a challenge for a courageous few. The members of Officina dell’Arte have unleashed all the energy accumulated during these difficult years of pandemic, creating alliances, cooperation and collaboration with individual talent and realities on both the local and national scale. Above all, they started with the local territory and history. The roots of everything shaping the exhibition-event lie in the local area and in its history, from the communication strategy to the development of the works through workshops, installations and performances that took place during the event, including everything that will follow in the Biennale programme of the Castle, which the Region of Puglia has entrusted for a part to the young talented members of Officina dell’Arte. 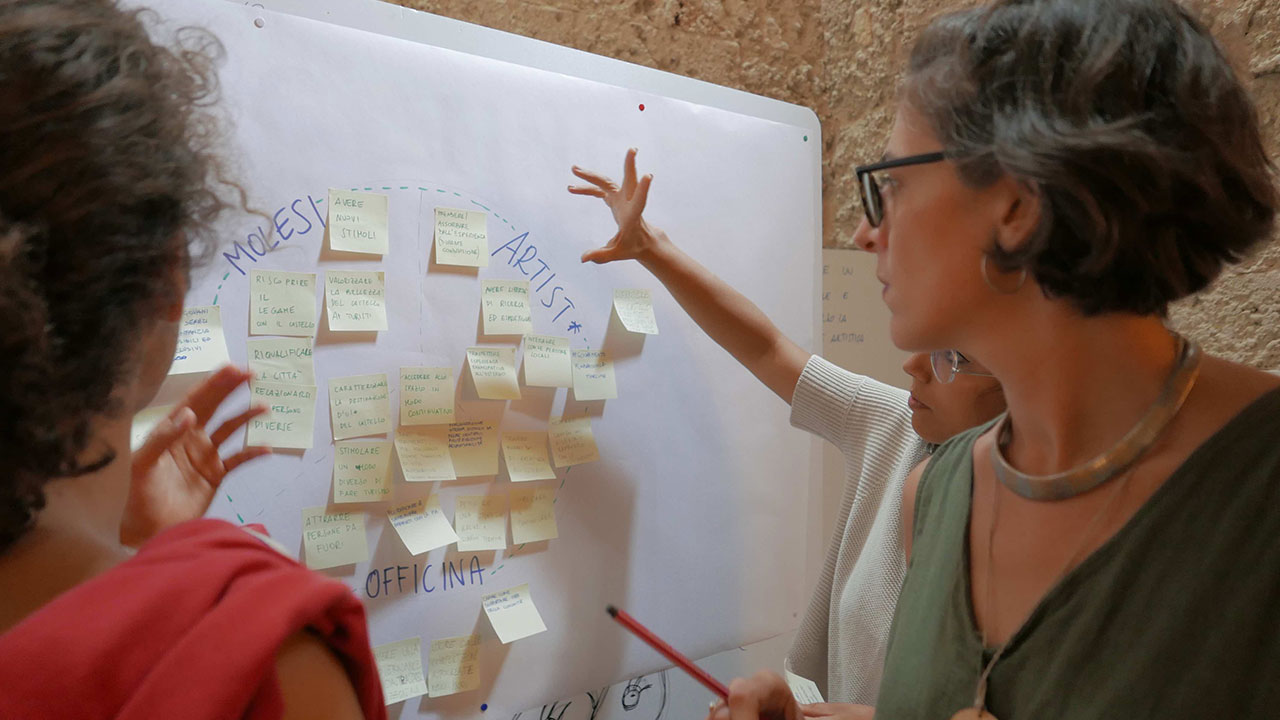 But let us take a step back. The exhibition-event is the result of a series of workshops held over the previous nine days, bringing together promising artists from all over Italy and those who, since 2012, have participated in Con.divisione, the residency project for national and international talents (now in its tenth edition) with important voices and professionals from various disciplines. Organised in groups, participants worked on the XYZ research and took part in the co-design of workshops, run by La Scuola Open Source. 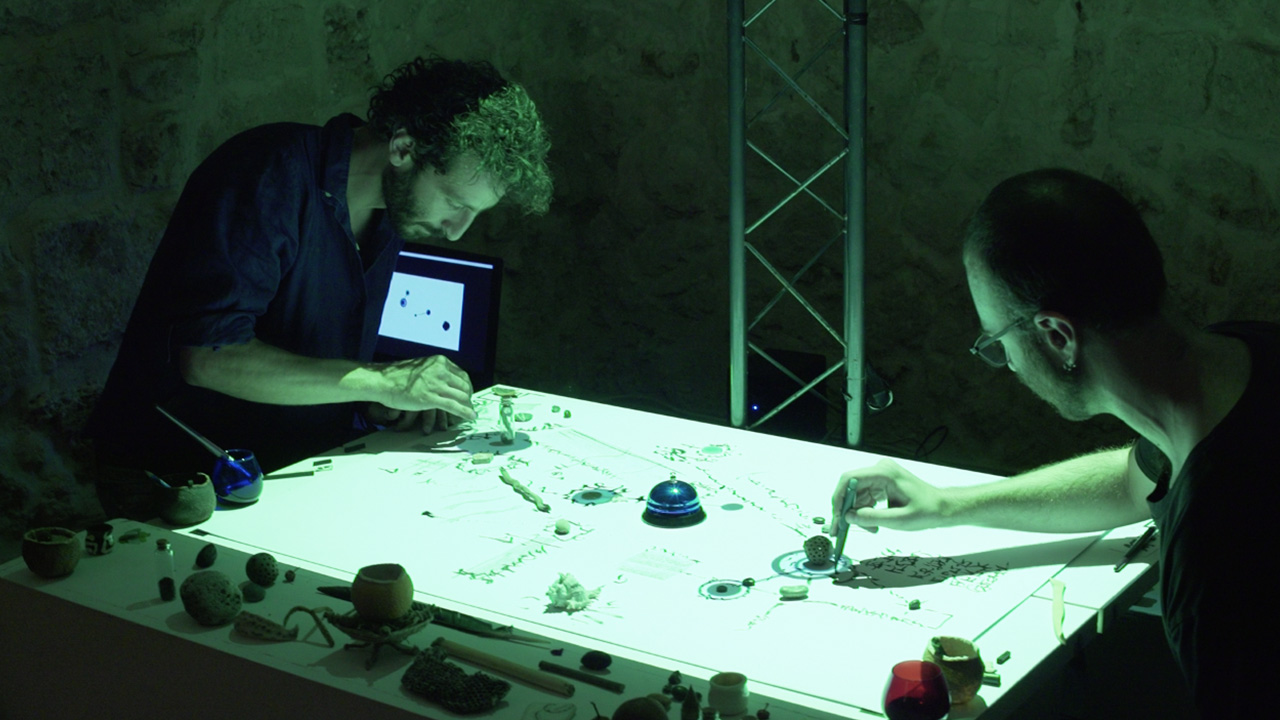 The exhibition-event evening celebrated the multimedia and performance productions that emerged from these encounters, but also the incredible creative energy that has been consolidated over time. There was so much energy that it convinced and infected even those professionals who had approached the exhibition-event with sceptical curiosity, prepared to dismiss yet another event as improvised, ready to be celebrated in the texts listing events found in the CVs of the associations involved. To have an expected disappointment proved wrong is one of the most beautiful feelings, further enhancing the energy received. 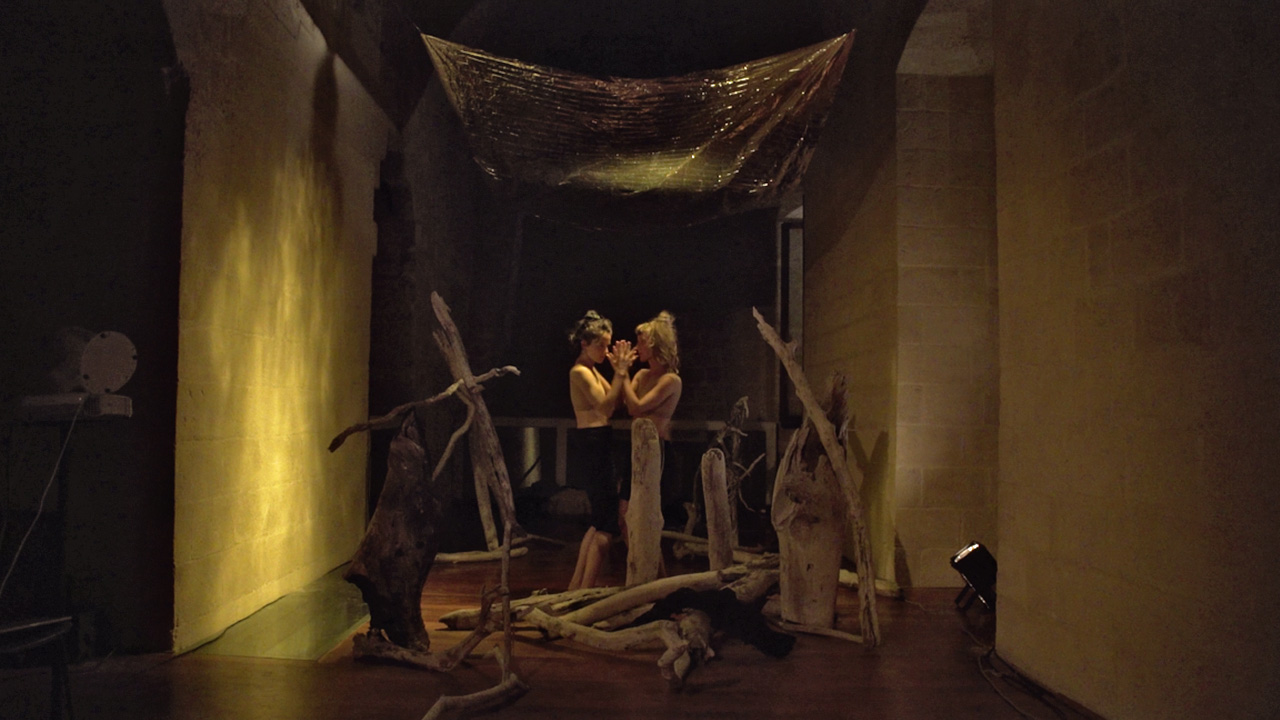 “Interacting with the host environment, building on one another’s experiences, using different media with the aim of constantly reconsidering the present in a critical and constructive way” – these have formed the basis of the Con.divisione residency project since 2012, where it all started. Today these ideals are almost taken for granted, necessarily included in a mission that requires attention and financial support. It should be kept in mind, however, that in 2012 language hybridisation was an obsolete topic and the importance of starting from the local territory was even less evident. 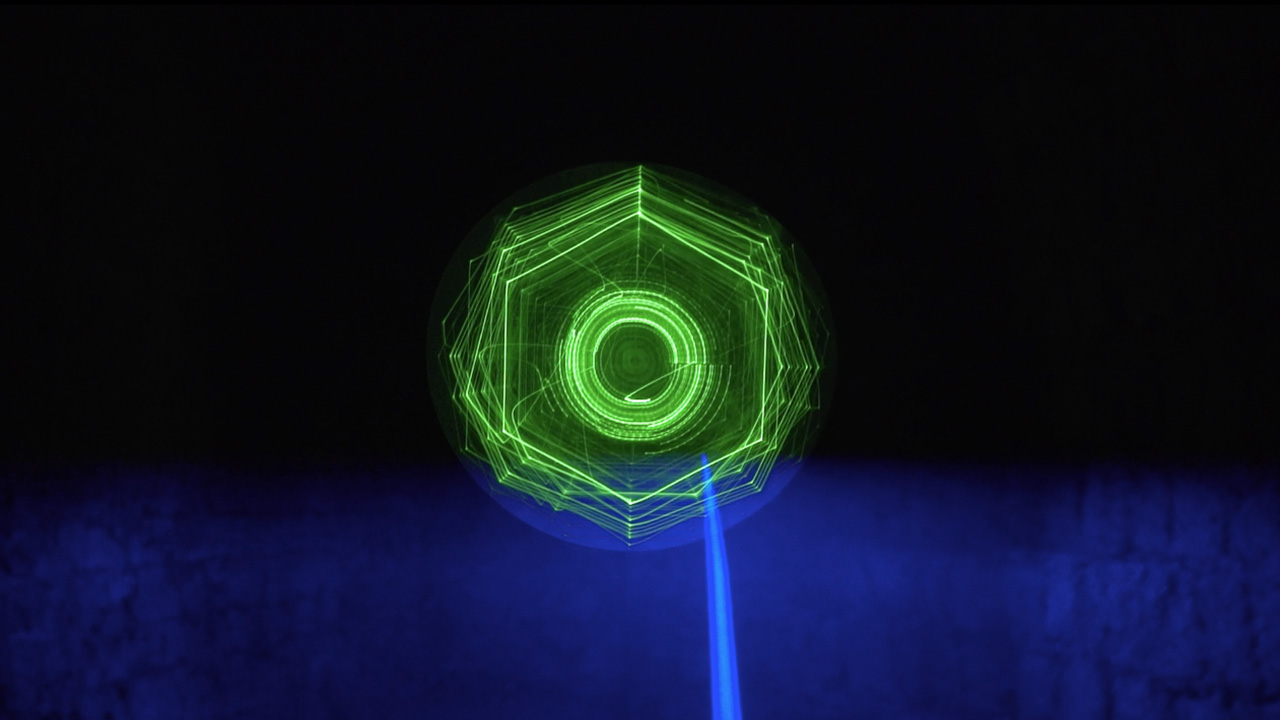 Today we are discovering everything that we have been zealously trying to erase over the years – the history of the patriotic spirit of individuals and the most unique craft traditions that have distinguished us all over the world – this through pride but also through the national economy. The pandemic forced us to re-evaluate these aspects at the very time of their funeral. We discover that territory is important, even and especially when engaged in more advanced technological operations. 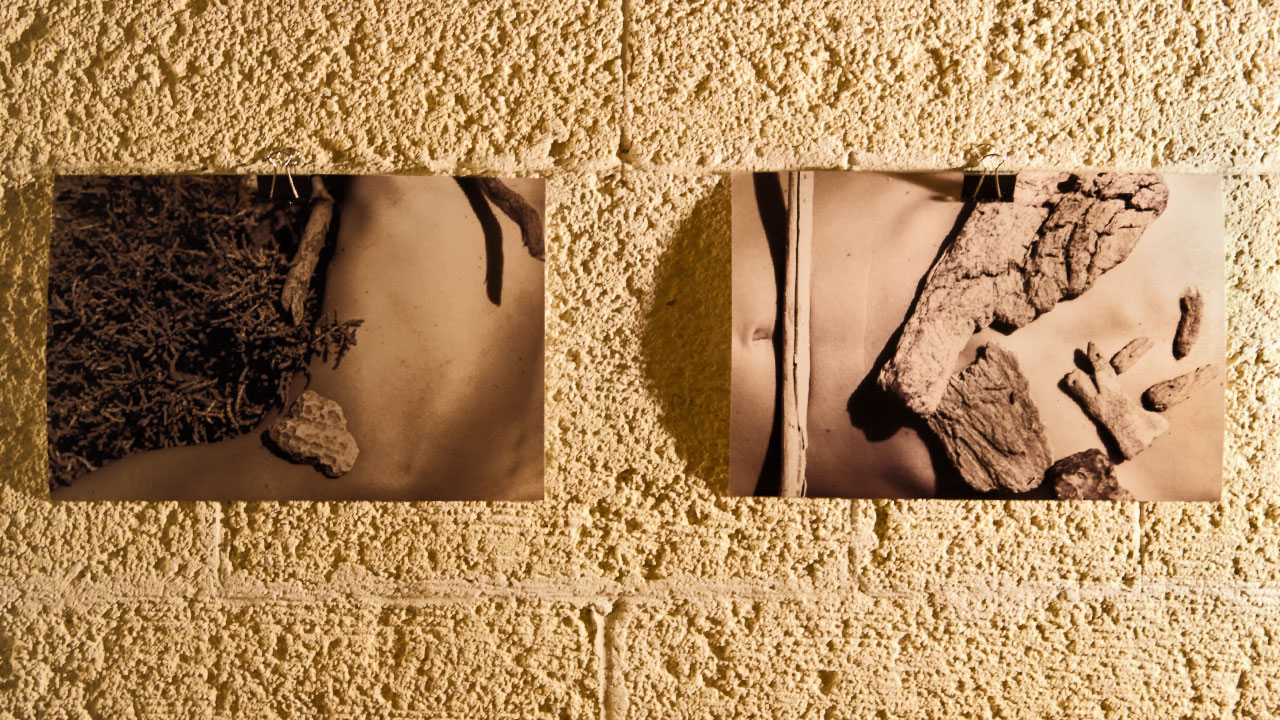 So the members started from the history of the Castle, from its walls designed to isolate the town from the most terrible enemy, rendering them soft and malleable; they turned them inside out. Outside is where the exhibition-event began, drawing the local population in, welcoming them inside with military discipline and with an organisational capacity that is sometimes seen lacking in the most professional and specialised of official organisations. It was not only the Castle that opened to the public, but the whole area. 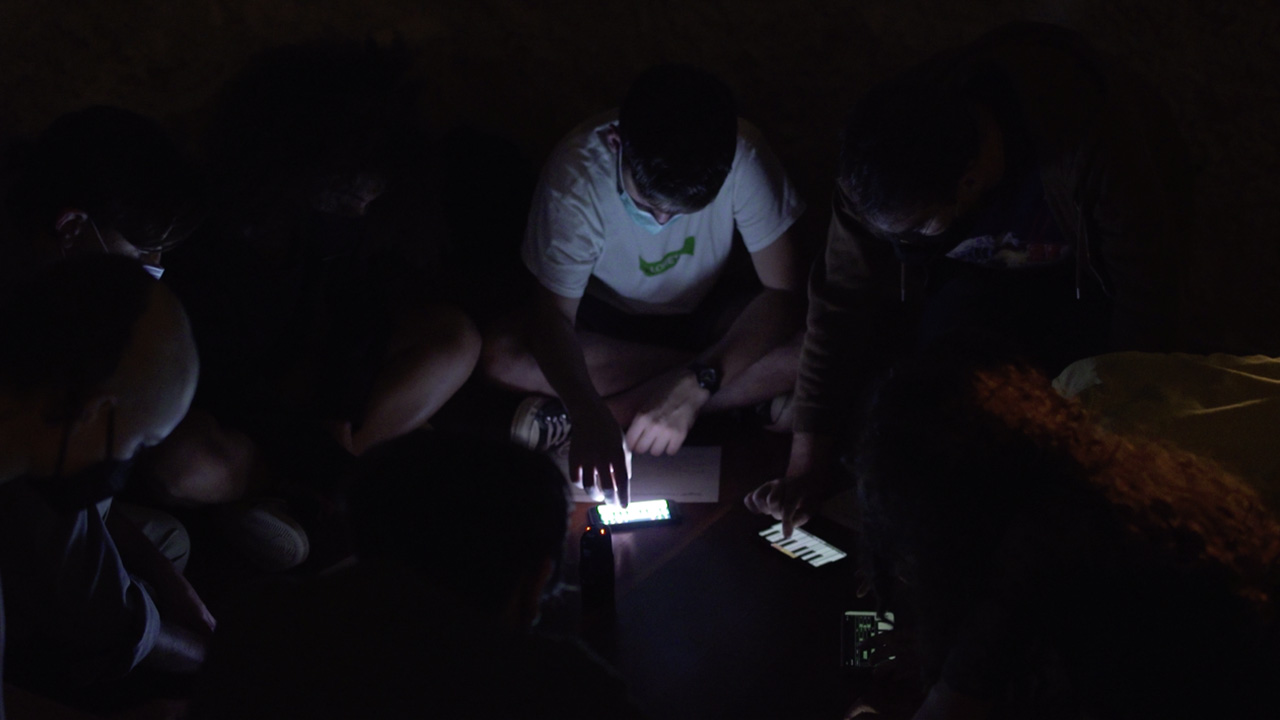 History entered the vortex of artistic operations taking place inside. Contact with the local territory and the empathy which developed during the workshops brought inside all the material and immaterial belongings of the Castle and the history of Mola di Bari, including the finds from the moat-cleaning operation. Lightness has transformed all the heaviness of the military structure. Performance paintings, dances, performances, videos, photographs and installations danced around the monumental spaces to the rhythm of an agile itinerary that opened up to the most diverse audience with great empathy. 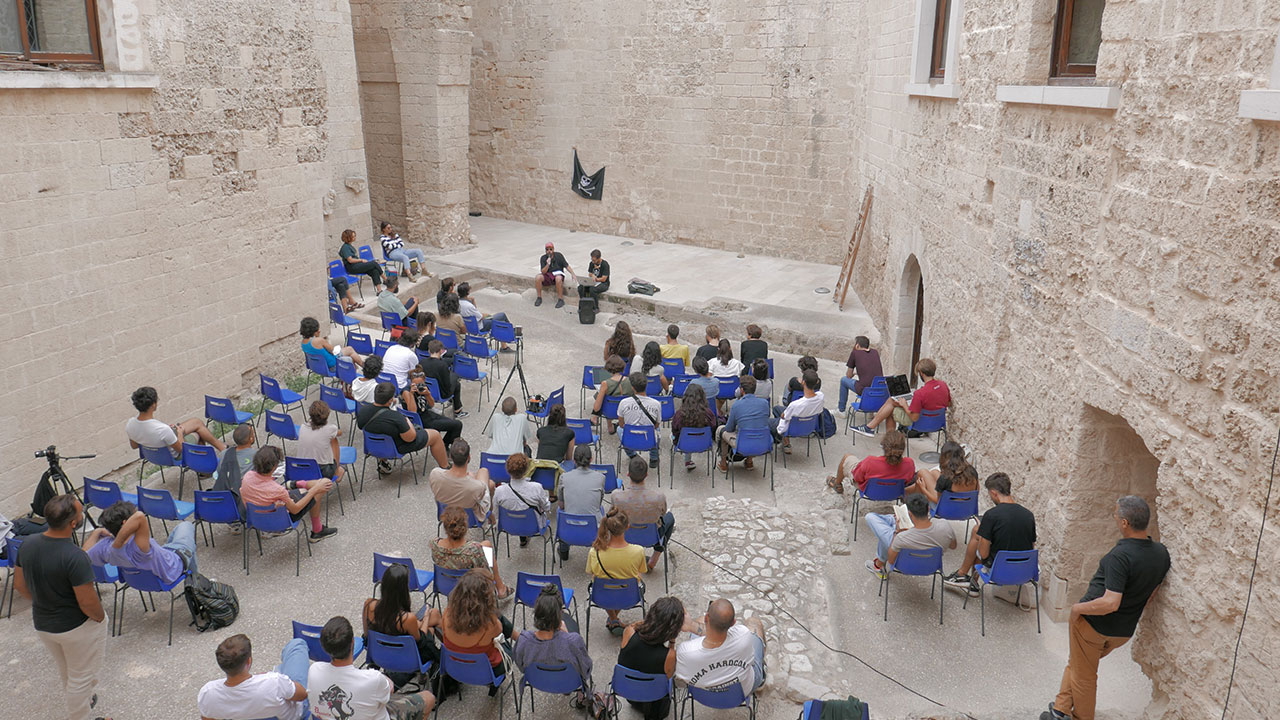 A celebration of space, life and creativity in all its conflicts, touching on those closest to us which, whether we like it or not, concern the relationship between man and machine, forcing us to redefine ‘nature’. Memories of this event and of the ten years of the Con.divisione project will live on in Ivo Pisanti’s artistic documentation. We can imagine them releasing once again the energy they captured, which will be projected into the events to come. At the moment, from this operation was born MAUL! – The Contemporary Castle with the aim of becoming a Center for Research and Cultural Production that is active on the territory.

The two-year management of several spaces of Mola di Bari Castle has been entrusted to Officina dell’Arte Association, winner of the Regional Public Notice Luoghi Comuni, promoted by the Regional Agency for Technology and Innovation of the Region of Puglia (ARTI).

Maria di Stefano.This is us