by Michela Ruggeri
in exhibitions

Wunderkammern, the art gallery that initiated its program in Umbria in 1998, opened in Torpignattara, one of Rome’s most colourful and multi-ethnic districts in 2008. In recent years the gallery has dedicated much of its interest to street art.

It is in this context that Wunderkammern is now hosting «Vantage», the first Italian solo exhibition of Aakash Nihalani: an artist of Indian origin raised in New York, where he completed his studies to then embrace street art as his vocation. More specifically, as he himself explains, it is an exploration of the perception of colours and shapes starting from the urban context.

In spite of illegality being the characteristic of an art that was born in the street and appropriates public spaces to lead them back to an ideal of recovered popular beauty, Nihalani seems to have surrendered – or evolved – his work towards a compromise, if we interpret the exhibition space hosting his work as being «bridled» inside a gallery. 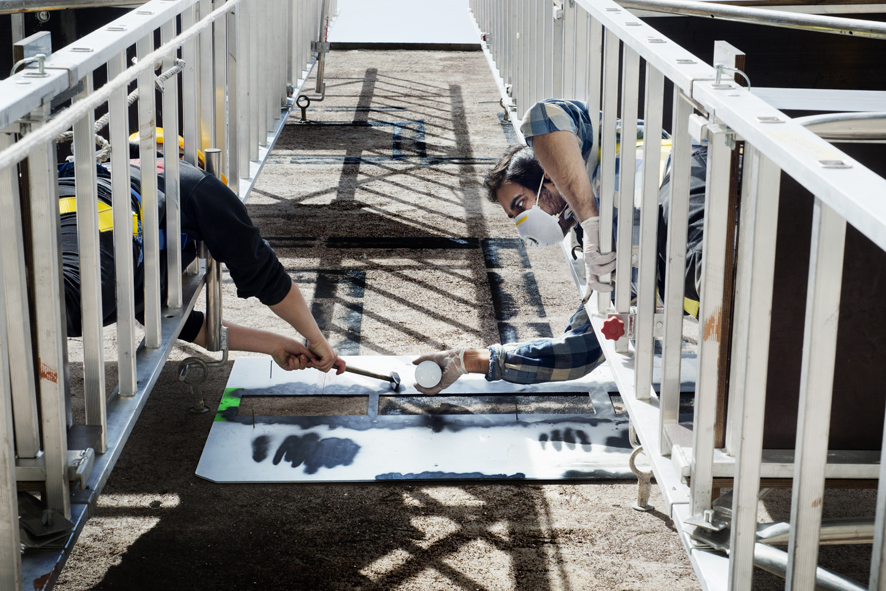 As Vincenzo Denti, the exhibit’s art critic, affirms: «the subject is the observer who is constantly participating in the game of the perception of shape and colour. Our eyes follow the squared shapes of the canvases, indulging the tape and acrylic edges to enter and exit from the fictional depths staged by Nihalano, according to his precise and recognizable stylistic code. «Vantage», the exhibit’s title, refers to the vantage that observers need to obtain in order to completely enjoy his work: positioning themselves at a certain visual distance.

In comparison to the canvases, the site-specific work on a wall of the exhibit space reminds us with great effectiveness of the amused and amusing original intuition of the artist. The narrower wall of the large entrance hosts a deceptively three-dimensional passage that opens on a light blue background.

But, it doesn’t end here. Nihalani wins the city over yet again, even outside the boundaries of the exhibition area. Not far from the gallery, in a small side street nearby, the artist astounds Rome with another work of his that partially covers the side of a building. All we have to do is look up above the stores, the grey pavement, doors and balconies to surrender to the beauty of colour and shape. An improvised reflection of great impact en plein air, the fleeting and necessary memory of another beautiful world to constantly keep in mind before looking back down upon our hurried lifestyle.