A Misura, the exhibition which opened at Albumarte on 19 May, is an all-women group show curated by artist Donatella Landi. The eight female artists and former Landi students at the Rome Fine Arts Academy interpret the theme (Made To Measure) in its multiple meanings and in diverse ways. The expressive mediums used are video, painting, drawing, performance and action; all issuing from forms of thought, investigation and observation of personal and surrounding space; measure intended as a revealing process of confrontation and relationships.

Alexandra Wolframm’s work Ottomila (Everest) depicts the world’s highest mountain in charcoal, with a fluorescent sky above it. Fluorescent yellow in all its unnaturalness dominates the drawing and the composition exemplifies the current relationship between man and nature. Even a mountain as majestic as Everest now suffers from an oppressive and egoistic humanity, which abuses and pollutes even the most unreachable places on earth, driven by the urge to dominate. 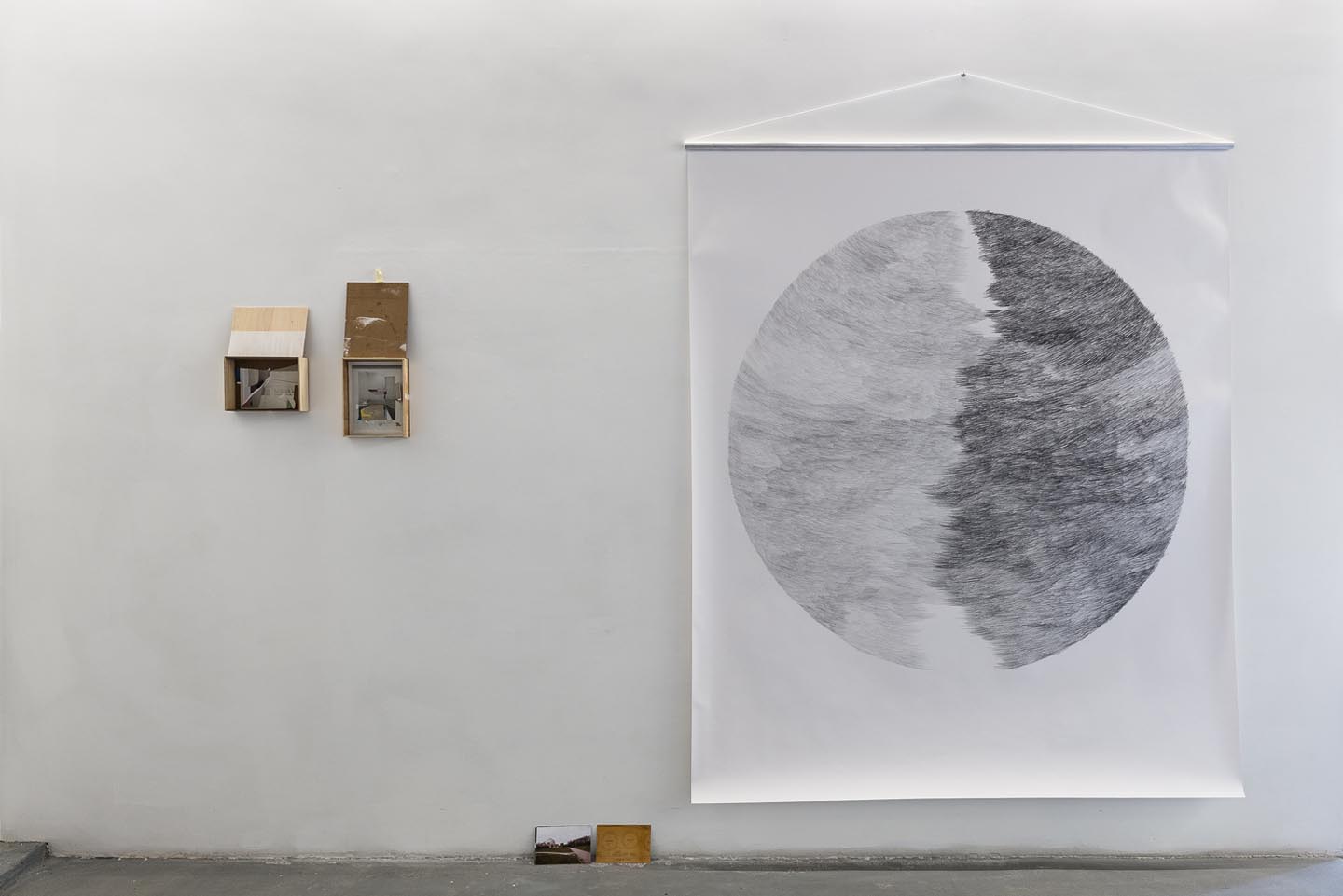 The exhibition includes a graphite and charcoal work on paper by Diana Legel, Vitruvianscher Kreis I.. The title alludes to an anthropomorphic conception of space, which is why the circle traced by the artist conforms to her measurements. In doing so, the body becomes the unit of measurement of a perfect, ancient form that includes light and shadow, contrasting dimensions and ambivalent realities.

The element of the circle is also to be found in Kreislauf, but in this case it is traced on the ground by Legel and constitutes a site-specific work that can be seen in the photo. The circular shape follows the outline of a storage tank, part of the former Berlin gas plant where the work was carried out. This artwork allows one to ideally cross an element of memory – in this case a place – and also to appreciate the power and essential simplicity of the circle. 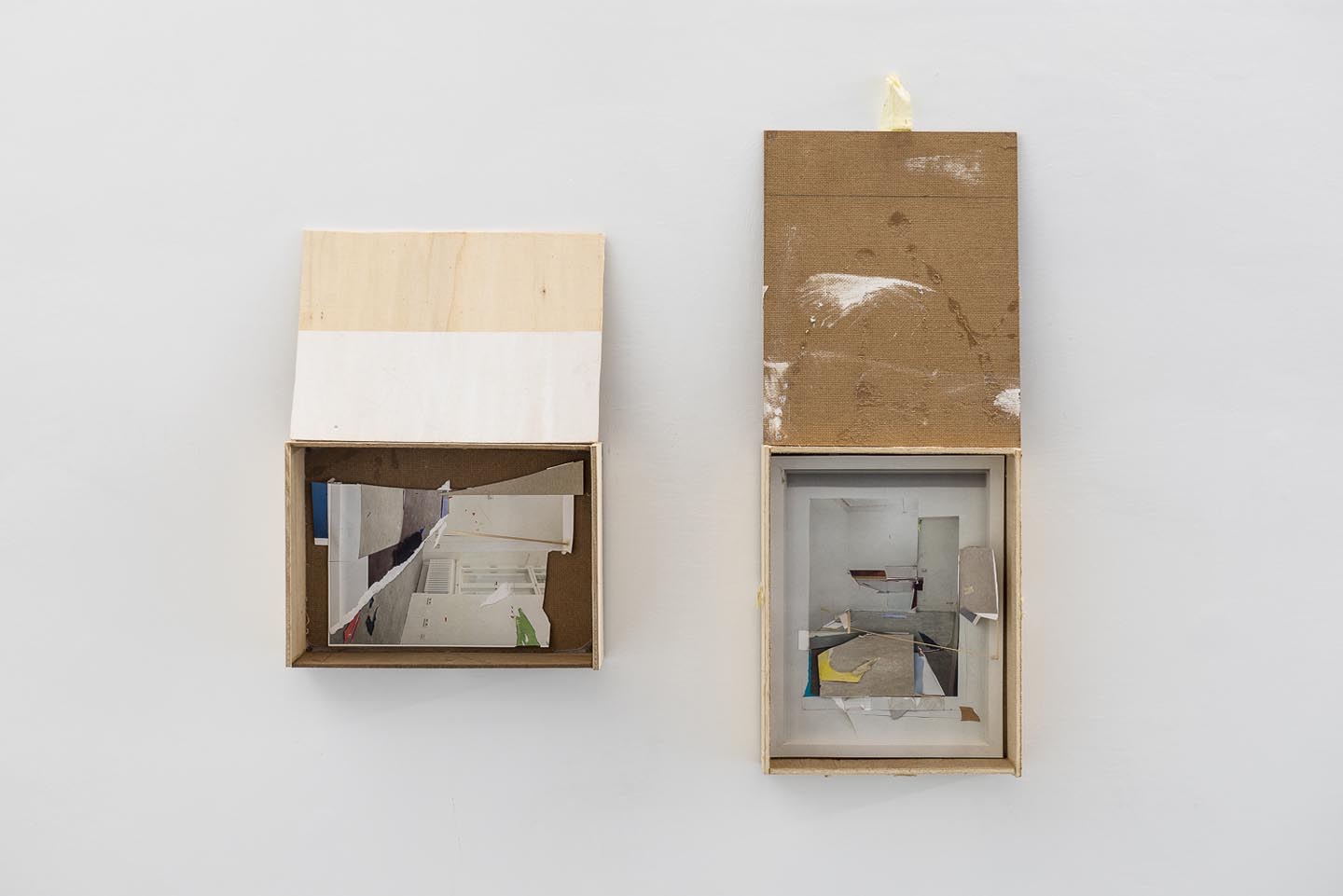 As in the previous exhibit, Diana Sirianni also works with the environment or, rather, in the environment. In her work Caramel Escape 2 she does this by creating photographic collages in which different objects (even three-dimensional ones) and environments from the present intersect with each other. Images in layers create a fractal dimension by making our reality, our space-time environment, become a possible layer of the work.

Following this there is the video Achse, where we see author Juliane Schmidt rotating on her axis in a loop on a screen. We find her reflected and turned upside down in a crystal glass filled with water, which simultaneously offers us a second perspective while we hear the sound made by friction on the glass without being able to touch it. The combination of audiovisual elements creates an anthropocentric dimension in which measurement is self-referential and space is individual. 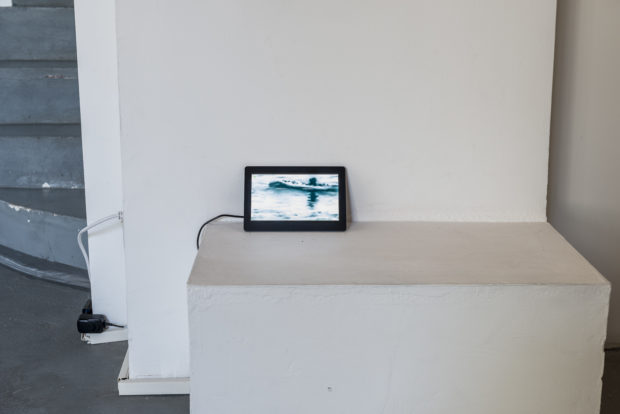 The individual as a unit of measurement is also present in the work of Aura Monsalves Muñoz. Again, the video is repeated, installed on a small screen; it is a dark, grainy shot from a news programme. The subject is a migrant travelling alone at sea in a small boat. The scene is reminiscent of In Search of the Miraculous, Bas Jan Ader’s extreme gesture doomed to failure. The man in the boat is an evanescent figure, small and unstable, and with his essential presence he becomes a symbol of human value reduced to the bare minimum, a life in danger that we merely film. 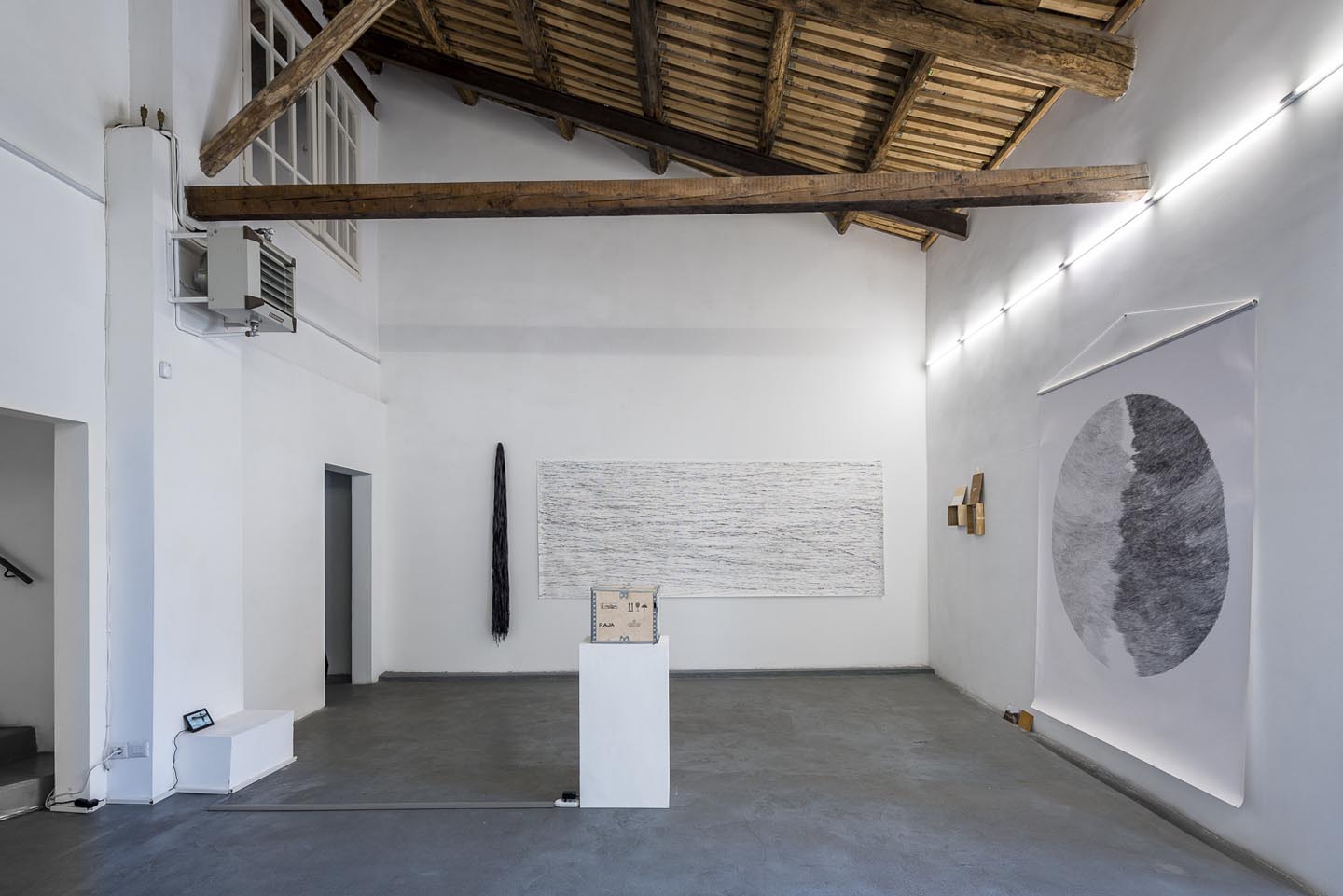 In Aura Monsalves Muñoz’s second work, On an Armchair, Late Afternoon, the artist explores the dimension of memory in hybrid form, moving between video and photography. The title evokes a poetic, reflective and engrossed dimension, while the framing, like the gaze, moves across the photographic surface in search of details. We are in a place that belongs to the mind, observing details in order to find ourselves in the dimension of memory, sharing memories even though we do not know each other. 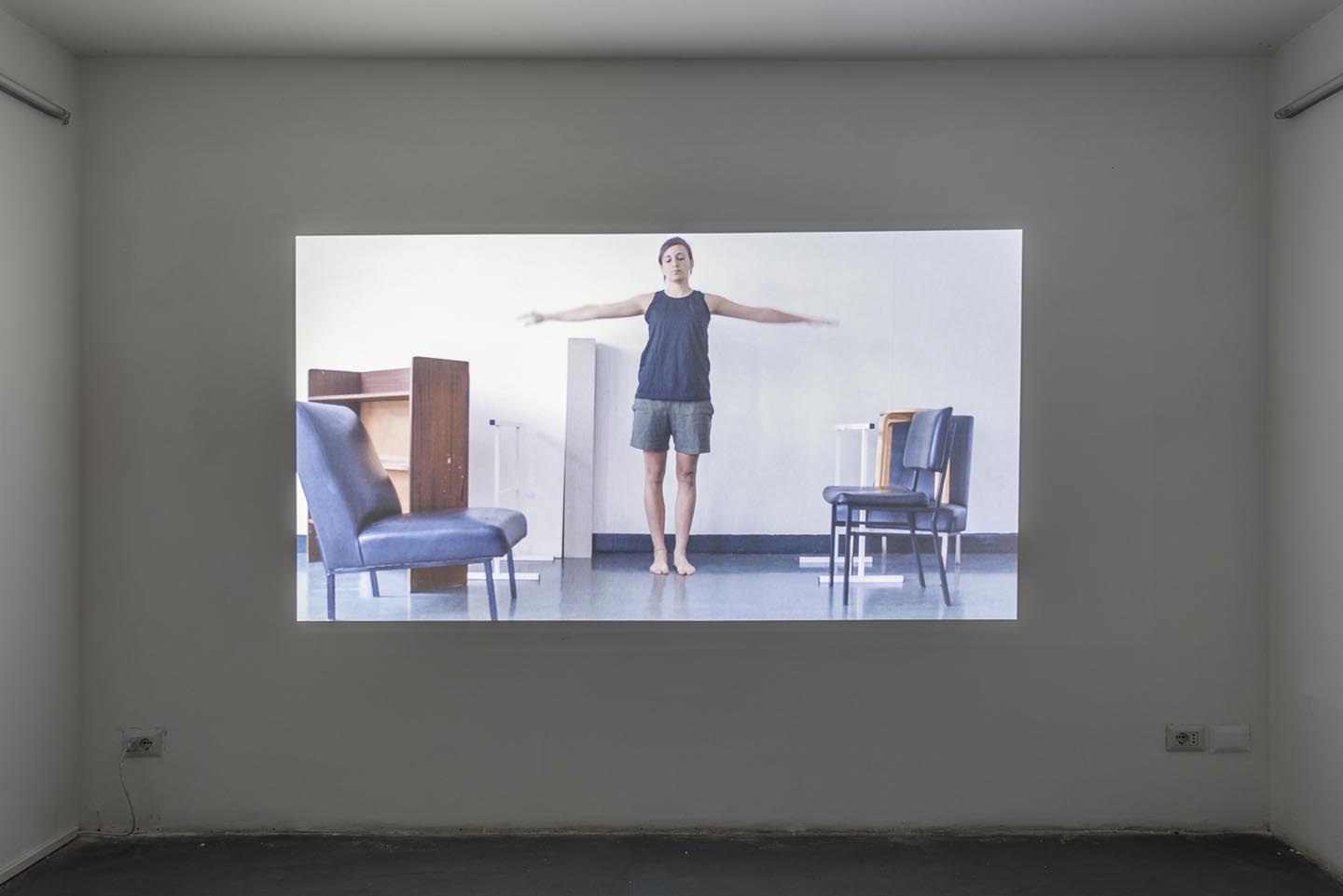 In the video Studio Training Lucia Bricco interacts with the furniture in the space where she was a guest. The physical relationship with the objects proceeds by trial and error through which the artist measures herself and the objects, as well as her artistic practice. Like a newborn baby probing the space to learn about it and get to know herself, the body moves, moving in new ways and writing a new body language. 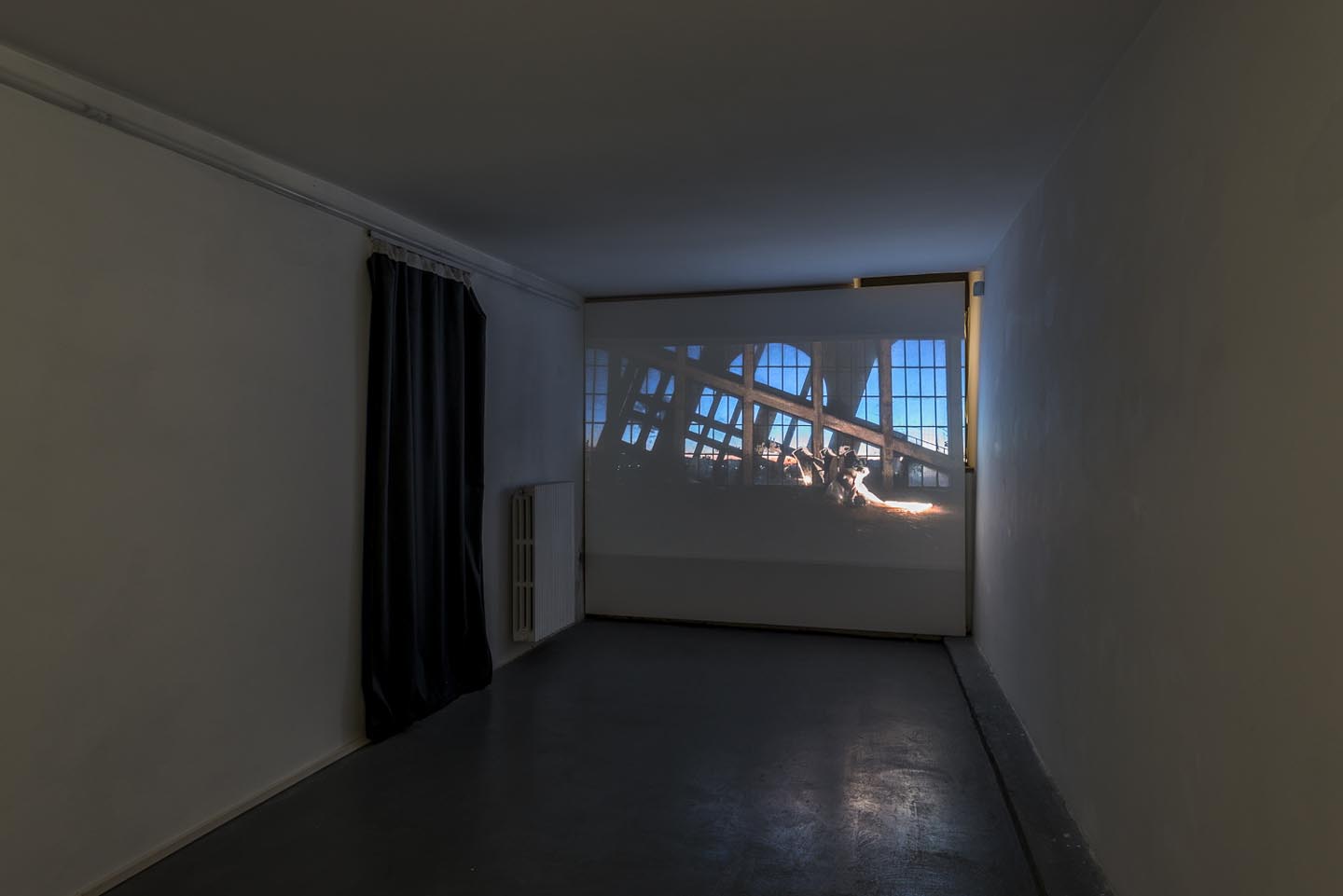 Finally, there is the work by Ximan Wang, B. This is a video of a performance in which the artist moves through different scenarios. These are abstract ideas that take on expressive, non-rhetorical, non-narrative forms. In the first scenario, the artist is on top of a mirror that reflects half of her. Both her head and amputated leg are repeated, creating a creature half suspended in the air with a stern gaze – a strange but real existence. In a second moment, the sound of a generator echoes in a dilapidated room; the artist, wrapped in a plastic sheet, carries a bunch of light bulbs with difficulty. All of a sudden she smashes the bulbs with a hammer until they fall to the ground with force. This strong gesture plunges the space into darkness, the generator shuts down and the noise also immediately stops, leaving the viewer in silence and darkness. 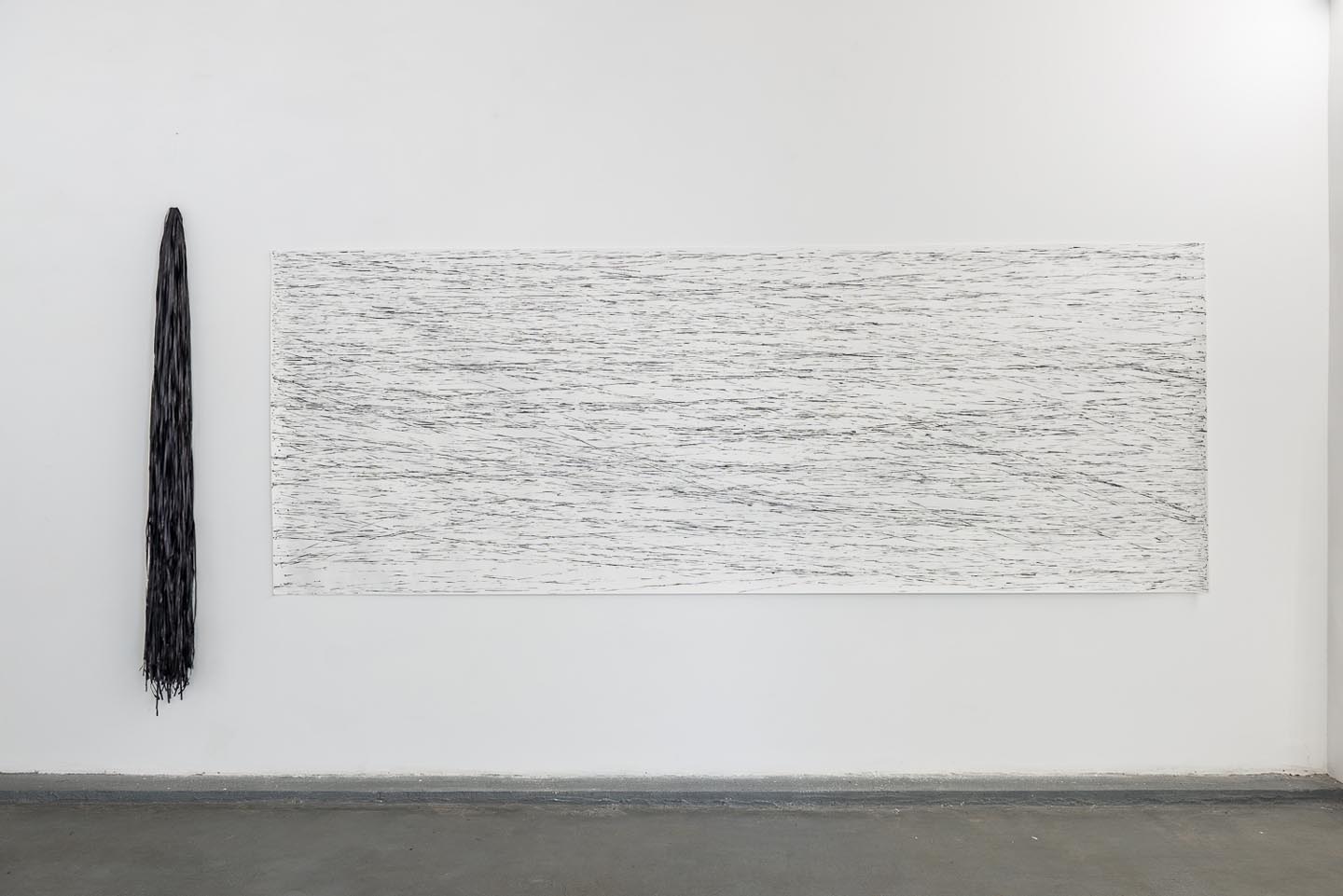 To conclude, this exhibition can be said to express the multifaceted concept of space and measure, which reveal themselves to be relative and subjective. In some cases, such as those of Juliane Schmidt and Diana Legel, measure is self-referential, while for Aura Monsalves Muñoz and Maria Giovanna Sodero it represents a memory, a place belonging to the mind and a voyeuristic dimension; for Alexandra Wolframm and Diana Sirianni measure resides in the interaction with architecture or nature, or otherwise with objects as in the work by Ximan Wang and Lucia Bricco. In all these cases, measure is the unit with which we choose to know and create the world around us.