by Marco Izzolino
in focus 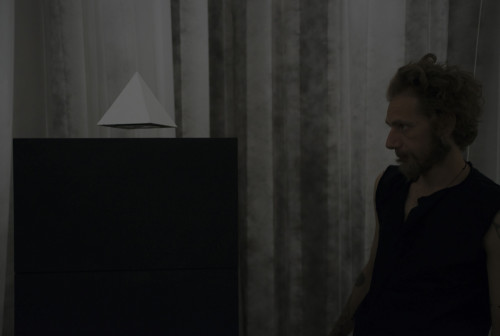 What you will find inside
has no stable solid form;
as it stretches upwards,
a thin matter
designs images that each of us carries within.
Enter,
wait,
breathe,
adjust your breath to that which surrounds you,
take the time,
recover «your own» time,
let yourself be enveloped by the silence and then observe…
look at what will be in front of you,
around you,
but, above all, look towards yourself…
and listen.

This installation is the result of an evolutionary process which «grows» like an organic body through slow and minimal changes. However, it does not expand in dimension but rather in its ability to generate meaning: the title, the details, the smell of the paper, the addition of new visual content and the adjustment to the environment hosting it all contribute to this evolution which is the result of a random process manifested in a totally synchronic manner that is – apparently – fortuitous.

Even my words referring to this work, whose installation I had the opportunity to curate for the second time, are the result of an evolution: words added to other words…all of which are my own. To me, it seemed the best way to accompany this «organic» work by Cannistrà: finding a way to use the words describing the work to ensure that its history could also be included. An ancient etymological dictionary lists this definition (among others) to the word «shading»: «In painting, to Create a shaded colour in such a way that the dark softly blends into the light like smoke vanishing into the air». It is interesting to note that in the Italian language a close relationship has been maintained between the gradation of light used in painting and the effect of smoke dissolving into the air. Smoke is the most obvious visible manifestation of the gradual passage from one form to another, from one state to another: from solid (or liquid) to gaseous, from visible to invisible, from light to shadow etc.

Cannistrà applies black smoke to a wide paper surface which totally envelops the environment hosting it in such a way that the support can be charged with magical energy. Smoke functions as a catalyst for the paper: increasing the effects of an emotional reaction determined by that which is represented on its surface. Yet figures do not appear. Everything is vague, abstract, shapeless (in a single word) «shaded»…and yet the installation is capable of arousing the most disparate emotions and with them, spectators project the image of what arouses such emotions in real life.

In this particular installation hosted in Pescara, the shading fastened to the paper stretching from the bottom upwards is introduced by other unfastened shading determined by the light which «moves» in a horizontal line from the outer part to the inner part of the installation and accompanies the spectators’ path from the entrance corridor (where there is light) to the work which stands in the dark.

The itinerary of the spectators is indicated by the lines traced by Alviani along the corridor walls. These lines were there before Cannistrà’s installation was presented and were drawn in an autonomous form. Nevertheless, they harmonise so well with this new work that the entire itinerary seems to be the result of a collaborative work by the two artists. The movements of light and shadow animating Alviani’s lines add a continuous vital irregularity to the static geometry of the installation, introducing something that appears to bring life to Cannistrà’s installation: its breath. The spectators in the hall move the paper (even imperceptibly) with their motion and so the work opens and closes like a large throbbing organ, taking in and giving back the air. Visitors become part of the work…and the work feeds on this…feeds on their breath…their dreams…their thoughts. 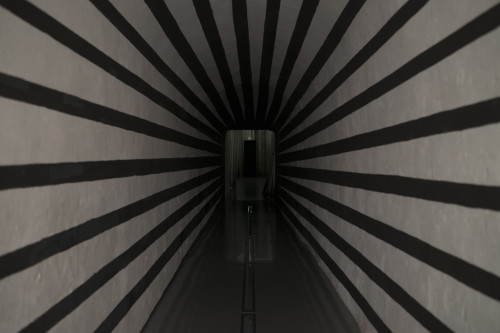 On the other hand, Cannistrà has chosen the idiom of abeyance for his installation. Many of the elements present remain concealed and latent such as: upwards tension, weight, colour, the presence of external light that could hit the «painted» surface and sound… Cannistrà works by subtraction but everything is present in its potential form.

The artist «conceptually» modifies the undifferentiated white of the walls in the room: it’s as if the walls themselves had been bent to create a protruding and irregular moulding capable of absorbing elements within and foreign to the environment along with the imagination and suggestions of those who walk into the installation. 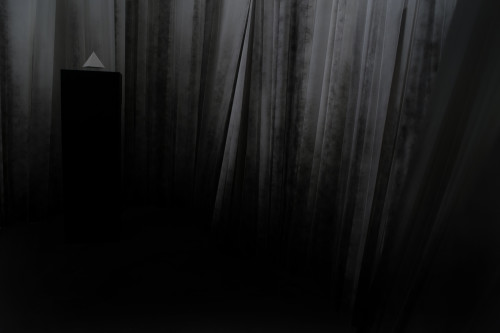 Like an even fog, the carbon black hinders any possibility of orientation. This also means that any possibility is open. All it would take are a few changes in composition and viewers could believe they are getting a glimpse at something corporeal, the «ghost» of a figure.

Among the many spectators who have already observed earlier paper installations by Cannistrà, it is very common for them to have the (ancestral) feeling of being in the thick of the woods; the light from outside creates barely visible shadows that are projected beyond the outline of bodies and the images of tales and people’s memories. Vertical tension – suggested by the lines of the folds and introduced by the horizontal tension of Alviani’s lines – is converted into tension towards one’s inner being and the necessity to express it. The breath of the spectators adapts to that of the work and becomes a part of it.

The suspended pyramid is found at the core of Cannistrà’s «great breath». The many meanings generated by the installation are condensed into a single ancestral symbol. It is in its motion, caused by the passing by of the spectators, that the encounter is manifested – as a work – between random and synchronic events, between visible and potential realities…between that which is and that which could be.