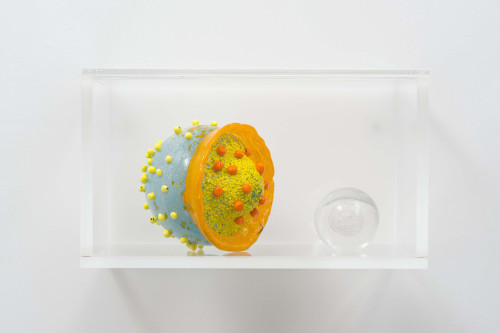 Lens on Life is the exhibit on display at Rome’s Federica Schiavo Gallery aims at « disseminating the results acquired over a five-year period (2010-2015) dedicated to Mitosys, a scientific research programme created with the support of the European Union as part of the 7th Framework Programme for Technological Research and Development involving thirteen international institutions and universities such as the Institute of Molecular Pathology in Vienna, the coordinator of the project, the Oxford University Department of Biochemistry, the MRC Laboratory of Molecular Biology at Cambridge and the Max Planck Institute for the Physics of Complex Systems in Dresden» (Lens on Life, press release).

Art and science come together in an exchange orchestrated by exhibit curator Marina Wallace who organized the encounter between artists and scientists based on the affinities between their respective courses of research. Theme of the project is the biological mechanism defined as «mitosis», or the process of cellular reproduction. The works, created after the exchange took place between artists and scientists, translate scientific argumentations into an aesthetic idiom – that can be conveyed empathetically, made comprehensible and can shift the attention towards issues which deal with a close-up look at life. The exhibit presents the results of the collaboration in a balanced manner which does not neglect the importance of the process, dialogue and exchanges which have always revealed themselves to be essential to progress in the research of any discipline, whether they are scientific or humanistic. 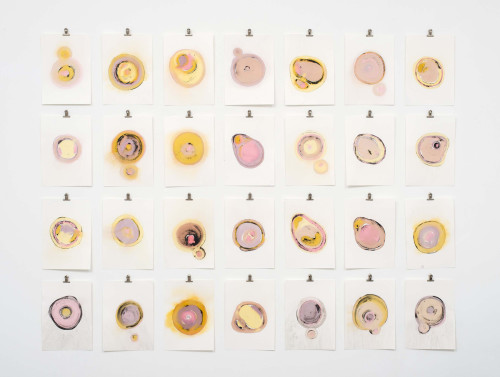 The meeting of the two artists Lucy and Jorge Orta with Tony Hyman (The Max Planck Institute of Molecular Cell Biology and Genetics – MPI-CBG, Dresden) examining the molecular mechanisms of preserved cytoskeleton processes was revealed in Cells, a series of glass sculptures which the two artists designed and commissioned to the masters of Venetian glass works at the Berengo Studio in Murano. The encounter between Ackroyd&Harvey and scientist Jan-Michael Peters (Institute of Molecular Pathology – IMP, Vienna) examining the biology of chromosomes has resulted in a series of sketches converted into negatives and animated into a film that evokes laboratory images and the fascinating forms of mitosis.

A dialogue that expanded to different disciplines introduced dance with choreography by Shobana Jeyasingh (Shobana Jeyasingh Dance Company, UK) who presented In Flagrante, a work representing the motion of micro-tubular structures in mitosis inspired by the studies on cell division carried out by Kim Nasmyth (Oxford University, UK).

Rob Kessler, artist and professor at London’s Central Saint Martins, interpreted studies on meiosis in mammal ovum with his Zona Pellucida, tracing the research and studies of Melina Schuh (Molecular Biology Laboratory MRC, Cambridge, UK) with in vitro sculptures in which the scientific image intersects with the fields of art and design.

Alongside concluded works and the aforementioned dialogues, there is also scientific information «adorning» an entire wall of the gallery that has been transformed into an encyclopedic page where news about cell division is summarized and organized and the progress of discoveries throughout history until the present are illustrated. The video documentary Meeting of Minds presents the stages of the collaboration between artists and scientists.