by Roberto Pugliese
in exhibitions, focus

Alessandro Sciaraffa’s approach to sound should be considered, first of all, as a spiritual experience, then as a physical and conceptual one.
Alessandro is a kind of contemporary shaman who exploits the physical principles inherent in matter, giving them life and voice. This is the case of the series of works Totem, in which gongs are made to resonate “out of sympathy”; each object has different modes of resonance, according to size and the materials used in the making. Vibration “out of sympathy” occurs when one or more frequencies are reproduced which stimulate these resonances, vibrating the object in question so that it produces sound. 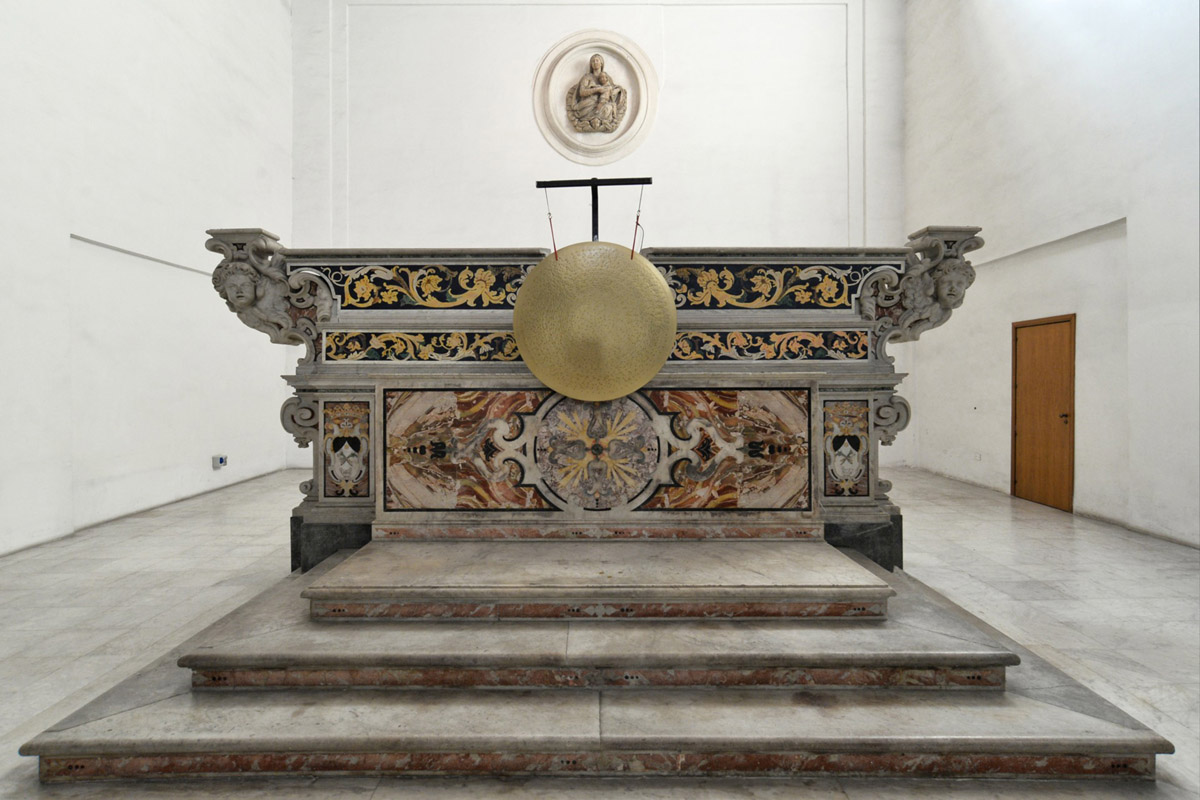 Each gong is suspended by metal structures and a subwoofer can be found at the back of the gong. The subwoofer is connected to a mini raspberry computer which runs a software made with Pure Data, a visual programming language which, in turn, takes real time data from a sensor using an Arduino board. Capacitive sensing generates an electrostatic field that interacts with the electrostatic field produced by users; each of our bodies generates different energies, therefore, the resulting sound is always different. 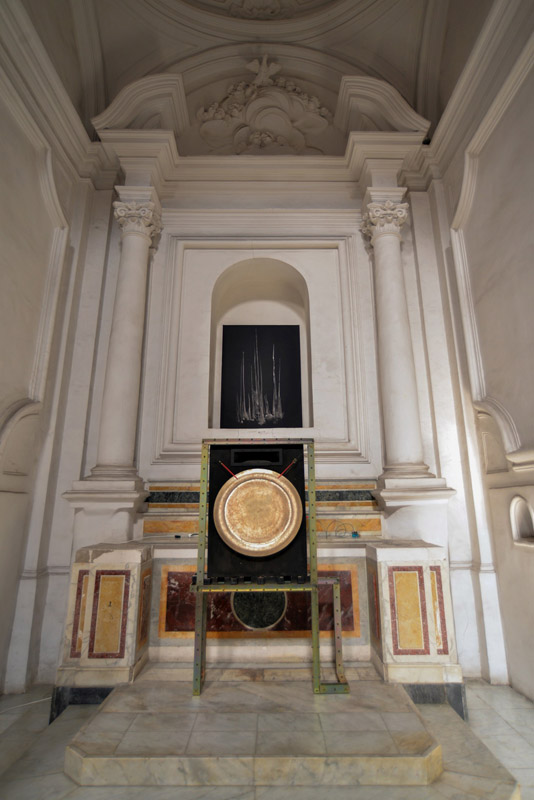 In three versions of the Totem, the position and movement of the user (thanks to the capacitive sensor), placed in front of the Totem, changes the frequencies produced by the subwoofer in real time. As a result, the resonance of the gong creates a profound interaction, in which the sound – powerful and rich in harmonics and low frequencies – restores a condition of psychophysical emphasis that puts the body and spirit in resonance. The fourth version is equipped with a touch sensor, which triggers an automatic process that explores, through random functions, the gong’s harmonic potential. The powerful sound of the Totem is also amplified by the magnificent acoustics and remarkable architecture of the San Severo Church in Pendino, transforming this into a unique and very suggestive experience. 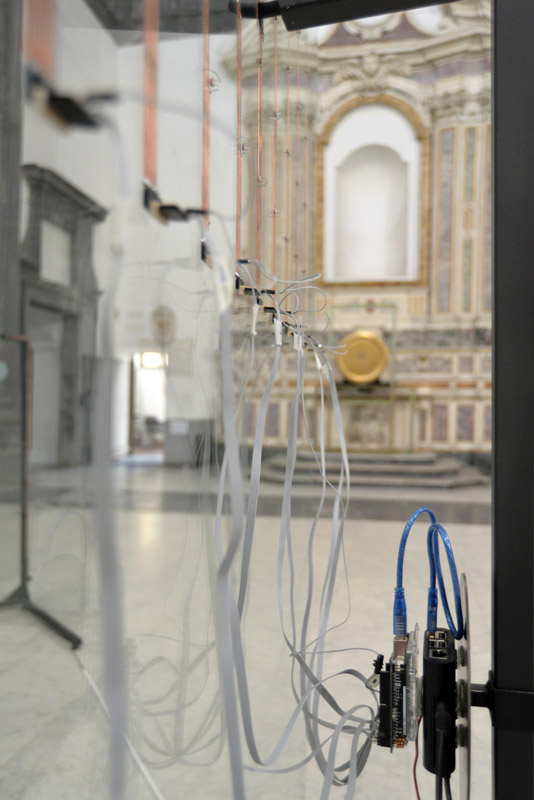 In the exhibition “Da Umbris Idearum” (from a work by the philosopher Giordano Bruno) the artist from Turin also presents the installation Le ombre del mare (The Shadows of the Sea) in which glass panels are anchored to iron structures positioned in a circle, on which speaker exciters are situated – these are special speakers that propagate sound using the medium on which they are positioned. On one of these glass panels, in addition to the exciter, there is a system (also made using a raspberry and an Arduino board) that, thanks to “shadow sensors”, modifies in real time the frequency of a band-pass filter (BPF), associated with white noise generating acoustic effects similar to sea waves. In this way users can operate the sound through their shadow. 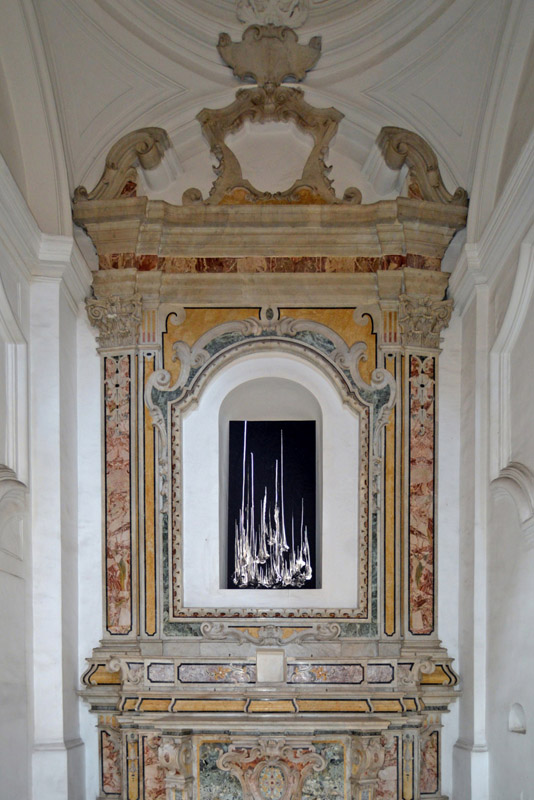 Flash Drawings, on the other hand, are a series of paintings made with aluminium powder which look like black monochromes. To be fully appreciated, they have to be photographed with a smartphone. The aluminium dust then reveals its nature when stimulated by the light of the flash. These paintings encourage us to reflect on the way the present reality is increasingly filtered through a smartphone camera, often leading us to confuse the real nature of the subject we look at.

The uniting theme of the exhibition is the relationship between the visible and the invisible mediated by the energy connection that from different elements converge into a whole. It is a sensory exploration that wants to create connections between matter and the immaterial to increase our knowledge of the universe surrounding us and of ourselves. This is a journey through science, technology and spirit which for far too long, perhaps, have not been in dialogue with each other.