AV Improvisation at the Romaeuropa Festival

FOR DIGITALIVE 18 Andrea Familari created AV Improvisation together with Black Fanfare (Demetrio Castellucci), a live performance of images and sounds. Familari, born in 1987, is an Italian artist currently living and working in Berlin. His artistic research focuses on audiovisual aspects and their combination, specifically in the creative exchange between sound and image explored through geometric structures. 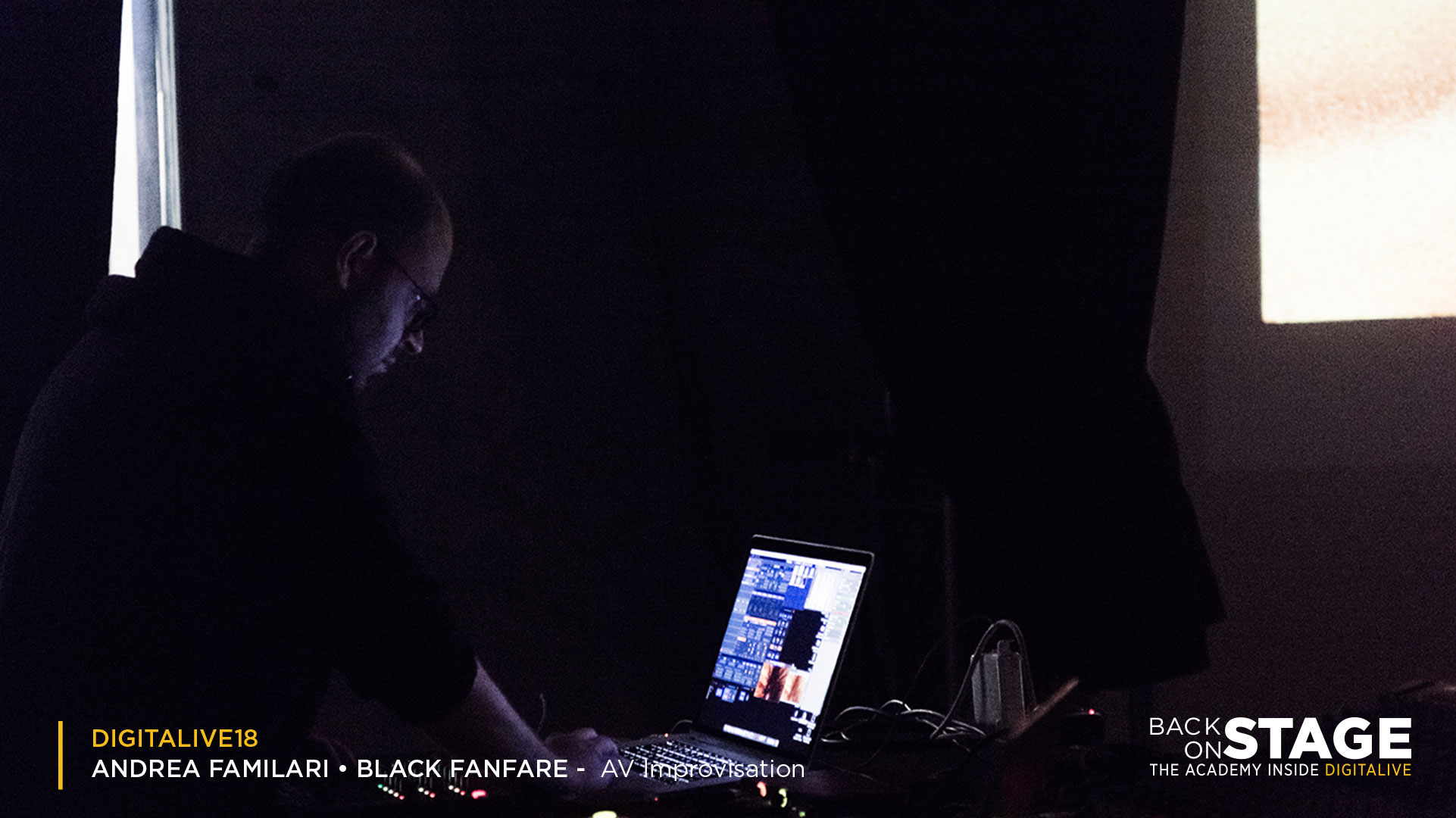 Nature, especially trees and leaves in his most recent production, is the primary reference point for his geometric patterns. In 2013, together with Marco Berardi (Mogano) and Giuseppe Bifulco, Familari founded The Records Label Arboretum, a collaborative platform where artists can experiment with sound and image. For this event, Familari has established an artistic partnership with Demetrio Castellucci, founder of the theatre company Dewey Dell, based in Vilnius, but who is also active in various music projects such as Black Fanfare, where he performed with Familari. 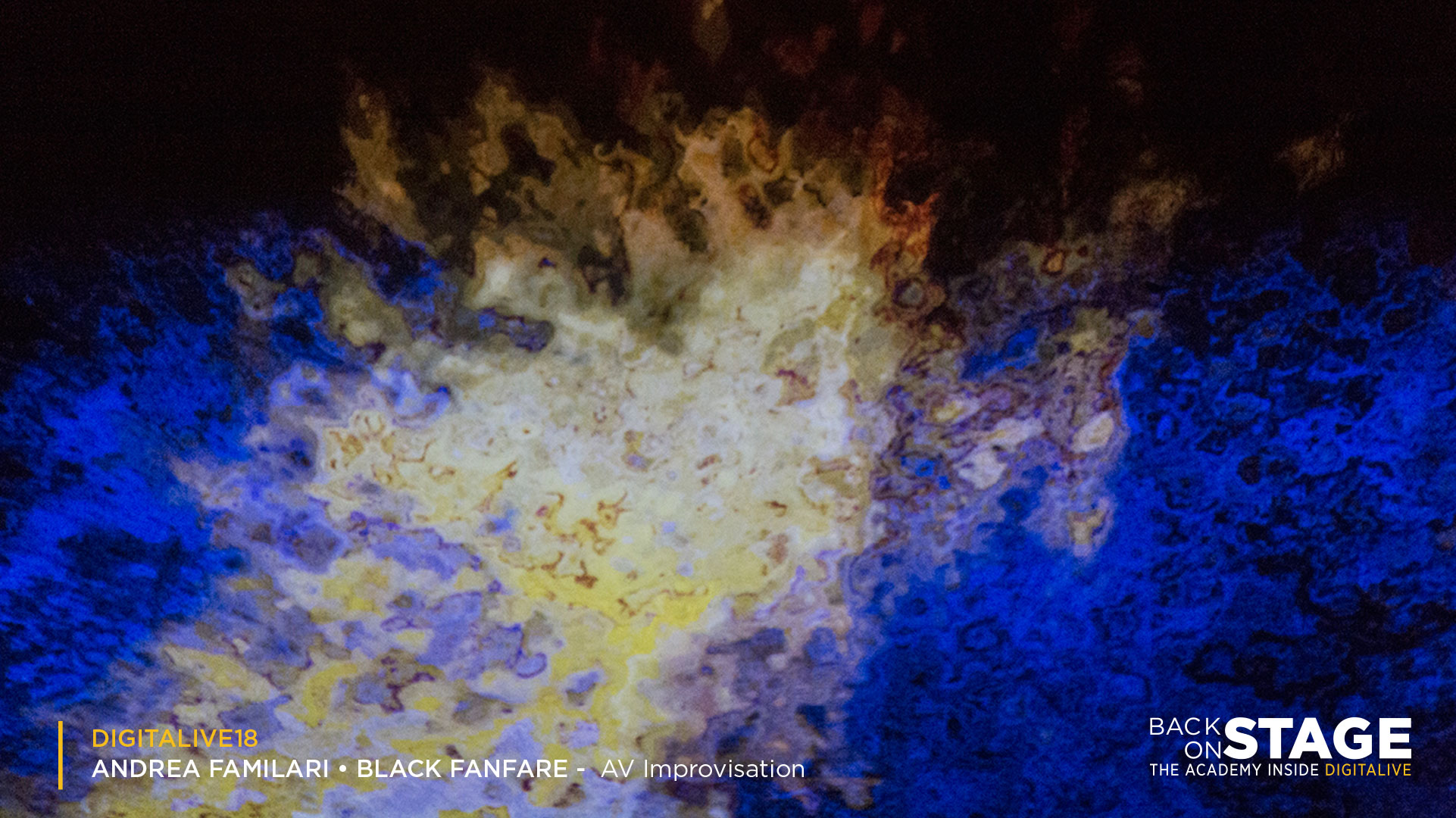 AV Improvisation is an audiovisual screening that takes shape as a result of the perfect research balance achieved by the two artists. On the on hand we have sound: Castellucci creates pop-like melodies combining them with the strong rhythms of electronic music. Familari is left with the task of giving visual shape to the rousing force of the music. 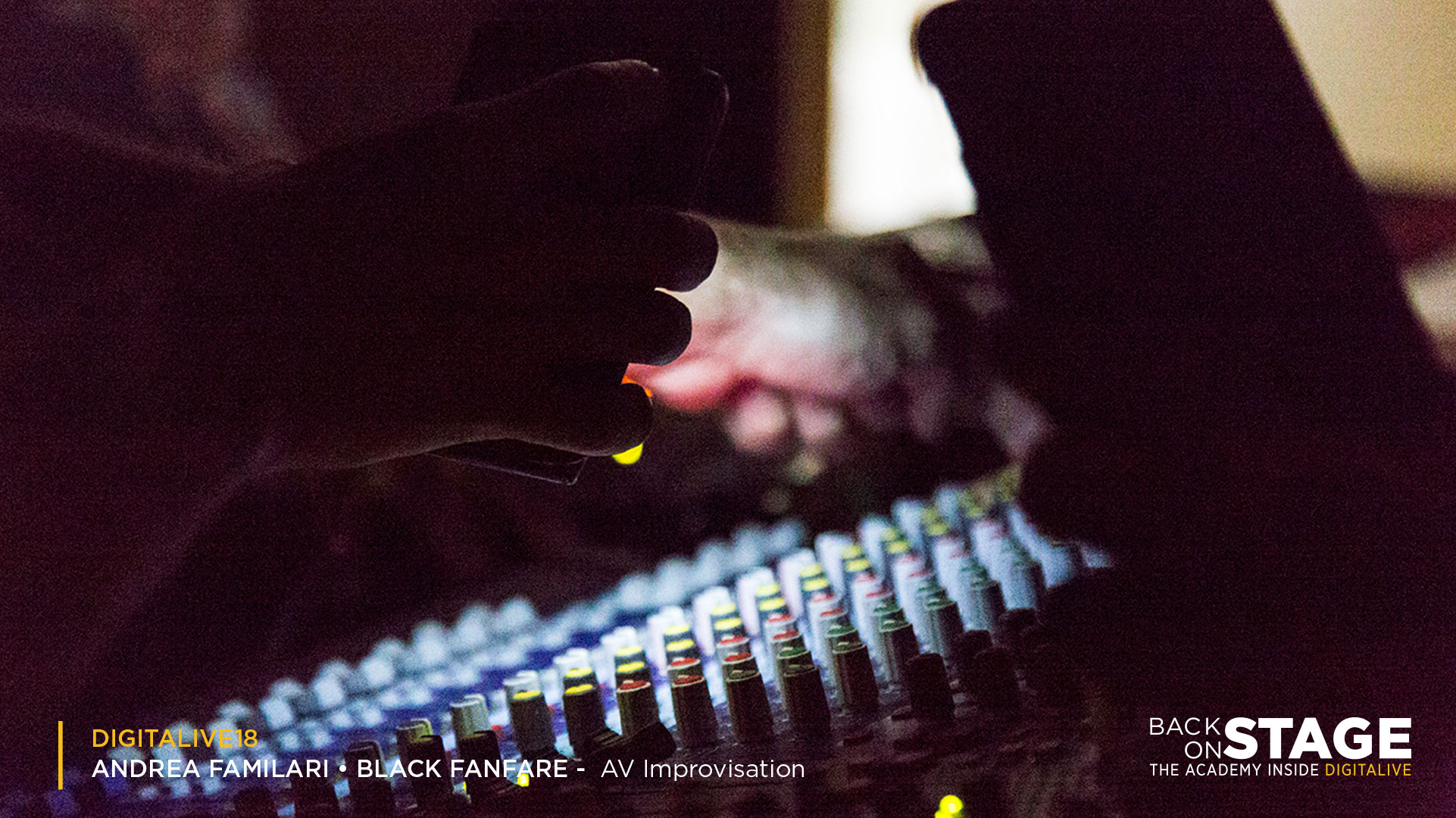 Black Fanfare’s melodies come to life in 3D shapes, altered and deformed in real time, aimed at transporting spectators into a new world. Spectators feel like they are watching a living organism reacting to its environment and changing as a result. For this project Andrea Familari has used patch “Ø”, a reactive audio programme he wrote after years of research in the field and which has travelled across the world in various Festivals, synergising with different musicians. Patch “Ø” is a system that analyses audio frequencies and transforms them into visual variations, in this case corresponding to variations in colour. 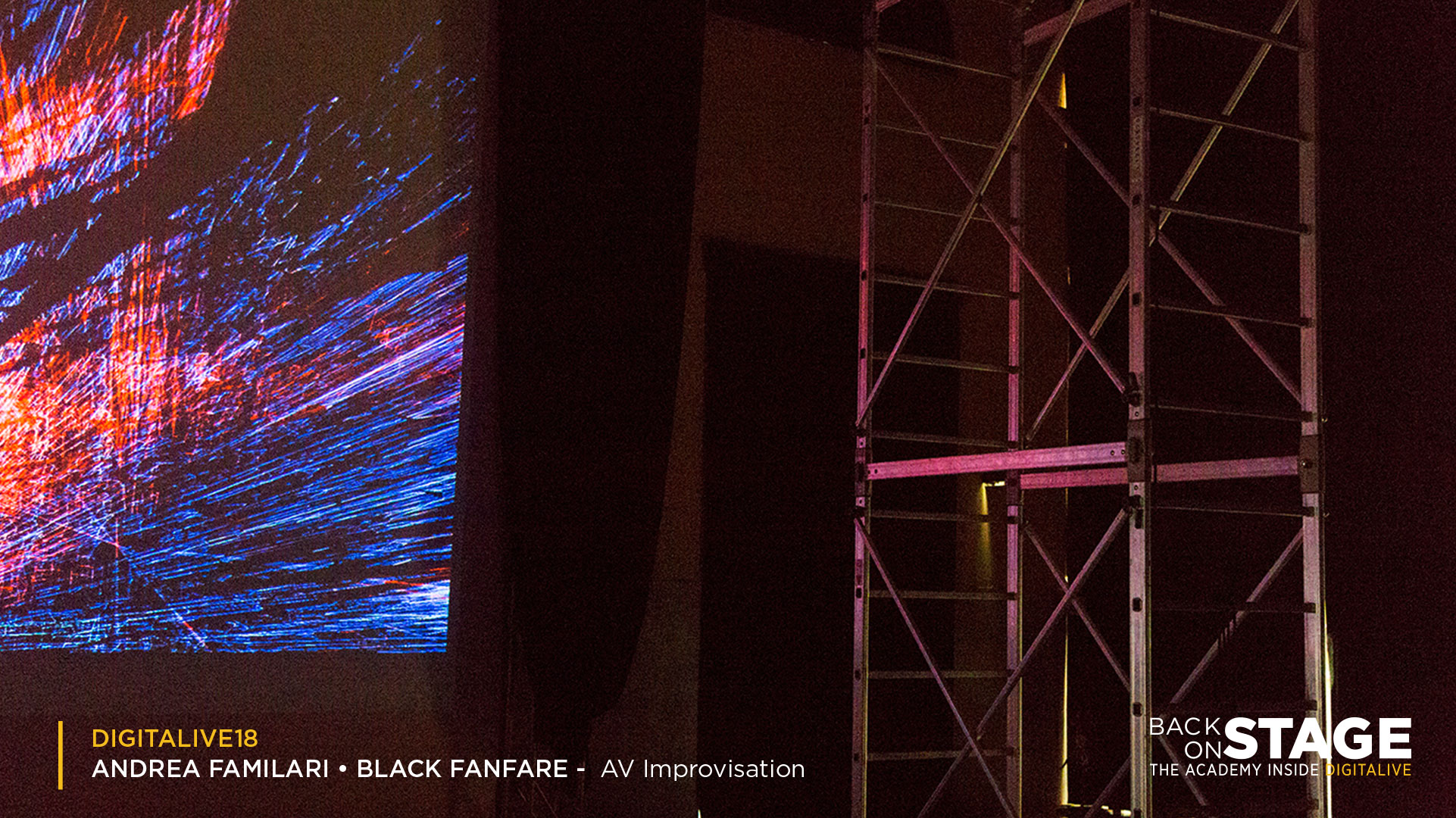 The aim of AV Improvisation at DIGITALIVE is to create a synthesis between image and music in combination with different musical styles, ranging from classic and jazz to electronic music. The work by Familari & Black Fanfare wants to create a sensorial and visual experience for spectators. 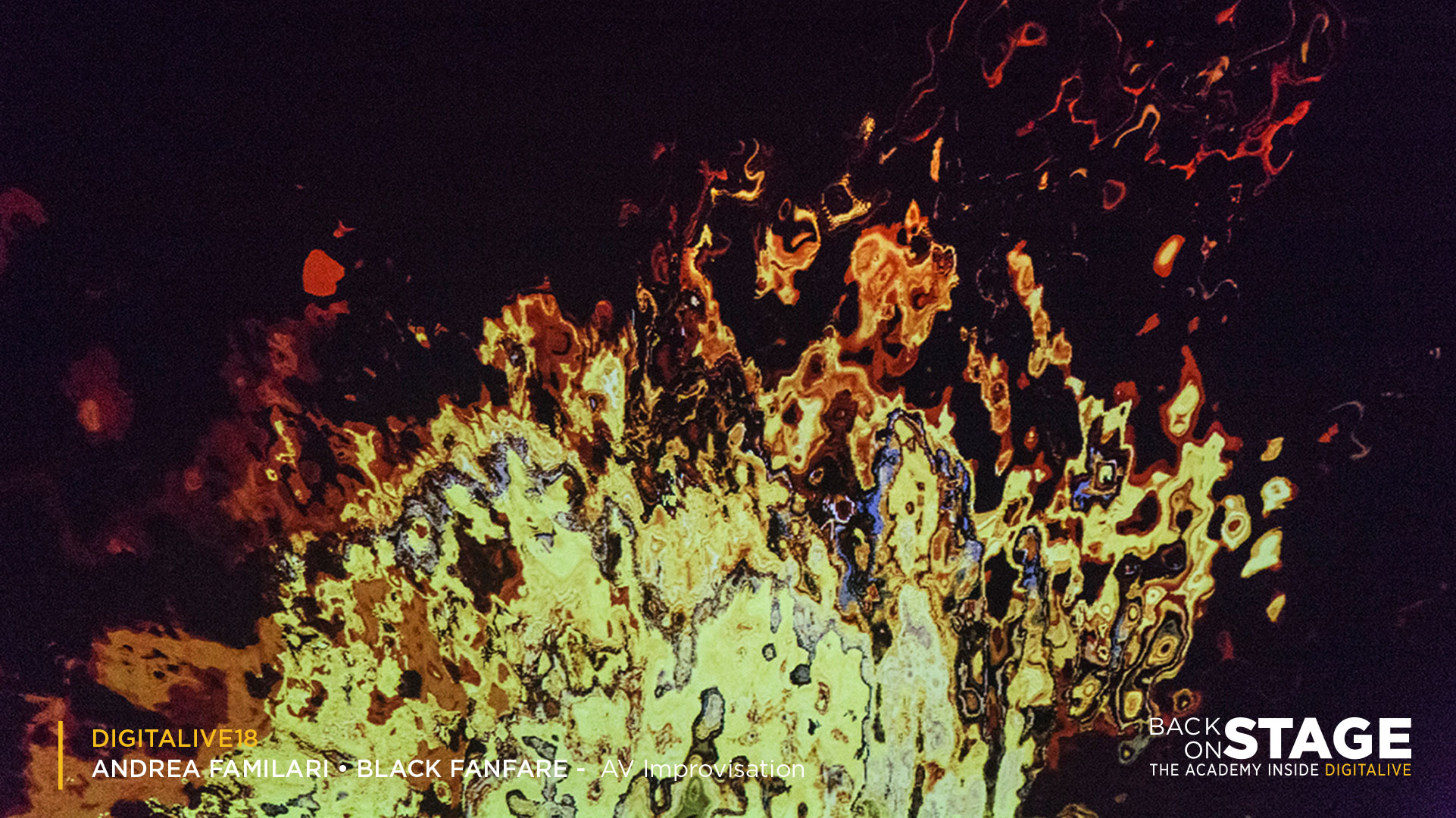 The creative exchange between shapes and sounds in this live performance literally produced vibrations in the Pelanda space where on 6 October the national premiere of the version created by Familari and Castellucci’s collaboration took place.