by Antonello Tolve
in Special Project

Alessandro De Francesco, artist, poet, essayist and founder of Language Art Studio realized Density of Tommaso Campanella for Arshake’s banner. Thirty works shape from thirty texts, selected from the original 1622 edition of Campanella’s Selected Philosophical Poems. Vectorized and reorganized they followed one another on the banner, one every three days. The essay by art critic Antonello Tolve that follows, presents his work within the wider context of his research. You can browse here below the archive of the entire corpus of works.

The Long Shadow of Words

The long shadow cast by wordsIn the extensive creative output presented by Alessandro De Francesco (Pisa, 1981), the dominant field is represented by the space dedicated to words – words forgotten by heart, words beyond which the vertigo of silence is present, words made of air caressed by the evening wind. It is a place of reflection, action, creation and ceaseless pleasure. Conscious that poetry is all that can be spoken when words are deprived of a voice, De Francesco engages in a struggle with the labyrinth of language in order to bring luminous Babel-like projects to life, where the semiotic universe attracts the flow of electroculture which, at times, reaches an elegant asemanticity – see, for example, the cycle Augmented Writing (2013-2017). Other projects are based on an optophonetic vision, impossible to reduce to a single poetic corpus because they have been realised through a procedure that the artist «summarises with notions of Language Art, Text-enhancing devices and “poetry as an artistic practice”.» (A. De Francesco)

This is an enticing Kurzschluss (short circuit) which unites les mots et les choses (words and things) under the same aesthetic principles to generate, describe, classify and give voice to a wireless fantasy able to create new forms of daily unreality. This is also seen in various publications such as Lo spostamento degli oggetti (The Movement of Objects, 2008), da 1000m – dès 1000m – from 1000m (2009), Redéfinitions (2010), Ridefinizione (2011), Augmented Writing – Scrittura Aumentata – Écriture Augmentée (2013), Continuum. Writings on Poetry as Artistic Practice (2015), La vision à distance (2016), Remote Vision. Poetry and Conceptual Writing (2016), Three Poetic Engines – Trois Engins Poétiques (2016) and La visione a distanza (2018). If, on the one hand, writing on paper is required to conceive processes involving direct impressions – fortunate, happy arguments that tie in with the printing tradition, naturally understood in all its various forms – on the other hand, the tendency towards an installation and “poetronic” model (to use a label dear to Eduardo Kac) leads De Francesco to produce soft, unmovable, nebulous and immaterial systems in which it is possible to read the cultural background and, simultaneously, the artist’s conquests in terms of the síntesis de las artes. 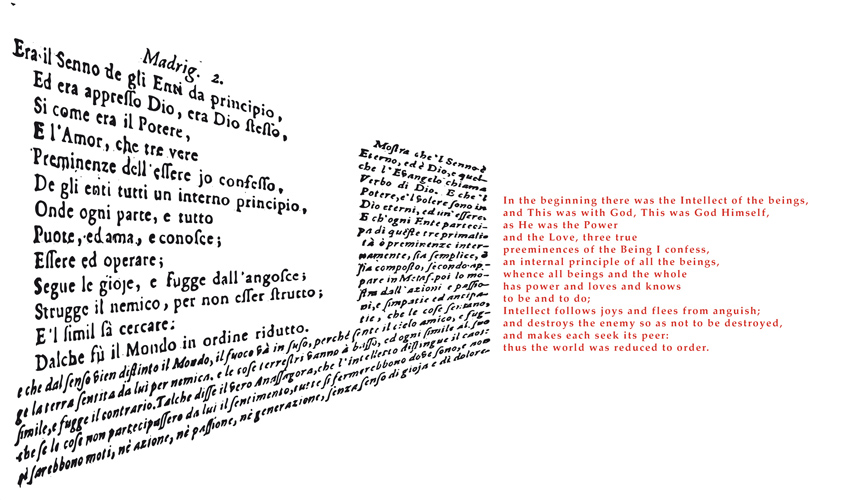 It is precisely this síntesis (synthesis understood as a union between poetry, electronics, music and visual arts tout court) that leads De Francesco to embark on a long theoretical and practical journey, taking on architecture as a privileged linguistic territory. This is a space in which to develop devices and idiolectic counterspaces – or, rather, idioelectric – that is available to everyone, a complete experience. «My work invites reader-visitors to experience poetic writing in both a sensorial and conceptual way. I conceive this writing as a «semi-immaterial» artistic practice: the conceptual, semantic and emotional immateriality present in language is sustained by the fragile materiality of the written word and voice», explains De Francesco.

The ability to process lessons from Vito Acconci, Robert Barryhave, Gianfranco Baruchello, Marcel Broodthaers, Tracey Emin, Joseph Kosuth, Vittorio Santoro, Bernar Venet, Andrea Zanzotto and, among others, Flavio Ermini (without forgetting obviously the wide spectrum of voices from the past, fellow travellers such as Dante, Petrarch, Tasso, Bruno, Tansillo, etc.) enables the artist to move easily in a liminal space, where brilliant linguistic integrations and a democratisation of the various parts constituting communication systems can occur.

All the energy of the past is present in De Francesco’s visual vocabulary, all participating in the creative fling of the present to shed light on supratemporal devices. These reflections are situated at the threshold of thinking that has yet to be thought, in the urgency of form and in the force of liquid content which a composition might assume. The work Densità di Tommaso Campanella (Density by Tommaso Campanella, 2018) reflects this particular gamut of action – a range that also uses generating software, bearing in mind that the artist also works on repetition or, rather, on differential repetition. De Francesco presents a selection of texts, over thirty to be exact, taken from the philosophical poems by Tommaso Campanella, whose thinking opened up a field of knowledge (understood as feeling, as in self-making) in which we only know our unaltered being, in other words our selves: semper ergo scire est scire sui (i.e. to know is always to know oneself).

«In oblique trajectory, at high speed, Tommaso Campanella’s poetry comes back in my work, and I would like it to come back here on Arshake, day after day, for everyone. I took thirty texts from the original 1622 edition of Campanella’s Selected Philosophical Poems, trying to highlight two interwoven themes: the metaphysical, cosmic, immaterial and conceptual reflection, to which Campanella is able to give an incredible poetic thickness; and, on the other hand, the body of the real, starting from Campanella’s own physical suffering, Campanella tortured in prison because of a historical change of paradigm to which his thought and his actions took part like the ones of other 17thcentury European figures (Galileo, Bruno, Descartes, Spinoza, etc.). Their stories create a link with our times, in which more sophisticated and (sometimes, at least in Western countries) less violent forms of exclusion and political control of free thought take place every day. I vectorised and reorganised certain parts of the digital version of the original edition of the philosophical poems by Campanella and I put them together – for the non Italian visitors – with Sherry Roush’s remarkable English translations, previously published in 2011 in a volume titled Selected Philosophical Poems of Tommaso Campanella (The University of Chicago Press). As often in my artistic work, poetry is both conceptual and spatial. Conceptual because of the “semi-immaterial” nature of language, which permanently exceeds its physical manifestation, particularly in the emotional and semantic wideness of the poetic word. Spatial because such semi-immaterial nature is precisely not entirely immaterial, since it stems from a certain typographical disposition, from a typo-carto-graphy subversively affecting real and digital spaces with its semantic and thus newly physical density (also in the German sense of Dichtung, accordingly to a false but beautiful etymology). This oblique textual surface is made for experience. Concept and space are reunited in it under the aegis of the poetic language». Enjoy the texts, enjoy the exhibition!

For a detalied lists of residencies, performances, and lectures around the world, please visit here Alessandro De Francesco, ‘s website and portfolio.