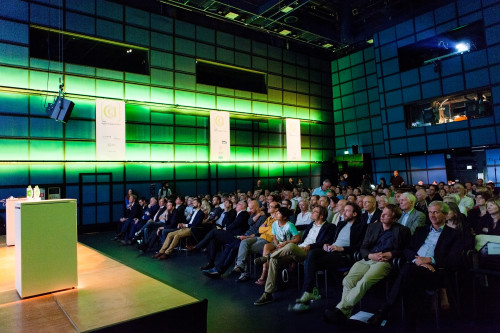 The App world is one all of its own. Like all new worlds, everything finds its own reflected space and so, alongside the apps created within the business sector or motivated by functional or other purposes (including apps which facilitate access to information regarding Foundations and Museums), creativity is also taking its place. The artistic apps are entering into a phase of institutionalization, despite prudently and within a restricted hub of experts. ZKM, the famous Karlsruhe-based German institute that has been dedicated to new technology for the past 25 years, has established – since four years and supported by different  sponsors – a series of awards for mobile apps, including: the Award for Artistic Innovation, the Special «Crowd Art» Award, the Special «Art & Science» Award and the Special «Sound Art» Award, each of which grants €10,000 in support of creativity. 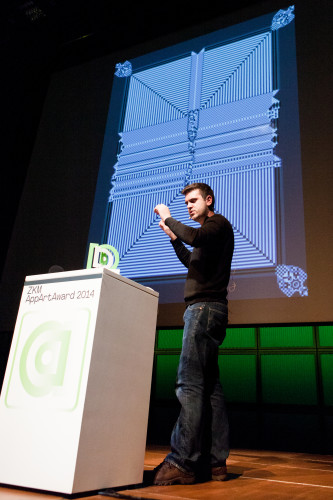 The contest is dedicated to artists, designers and developers from all over the world. The 112 presented apps created by authors from 22 different countries were submitted to an international jury made up of: ZKM Director Peter Weibel, Christiane Riedel, David Hermanns, Martin Hubschneider, Laurence Rilly, Patrick Breitenbach, Aaron Siegel and Chiara Passa. The winners were announced on 11 July during a ceremony held at the German museum along with partners CyberForum and V.

This year, to Jussi Ängeslevä, Ross Cooper and Danqing Shi was recongised the Award for Artistic Innovation for the Last Clock (2011), an application that enables users to create a personal media art work that visualizes actual time, human time and a kind of «removed» time.

Ernst Uys from South Africa received the Special Award for Art & Science for the iOS application Sablo (2014), which is based on the Abelian Sand Pile model (or Bak-Tang-Wiesenfeld model) in theoretical physics. Here, a so-called cellular machine is used to model the movement of single grains of a sand pile in an even grid to illustrate the ways in which complexity emerges in nature. The application is to be awarded by the Federal Ministry of Education and Research as part of the Science Year 2014 of the Digital Society.

The Special Award Crowd Art was assigned by CAS Software AG to Daniel Becker, Michael König, David Murmann and Alexander Rechberg for LASACT (2013), a web application throughout wich is possible to create and control an interactive, audiovisual light sculpture, such as a RGB laser projected on to the facade of a building, in a multi-user mode so to create collaborative projects.

GFT Technologies and the ZKM confer the Special Award for Sound Art, to Gaël Bertrand and Gaëtan Libertiaux for their GeometricMusic (2014), an application that provides an intuitive method for creating music recorded by people and visualised as geometric forms that can be combined in a sort of dynamic sound collages.

As of 16 July, the winning applications as well as a selection of works considered among the most interesting proposals will be on display at ZKM and made available to the general public for testing. 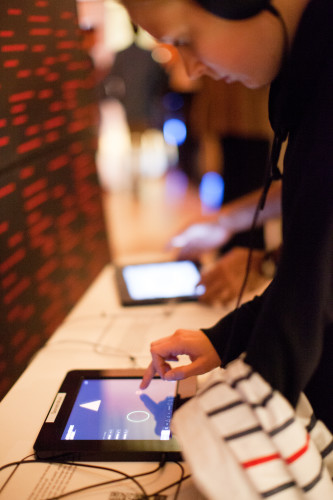