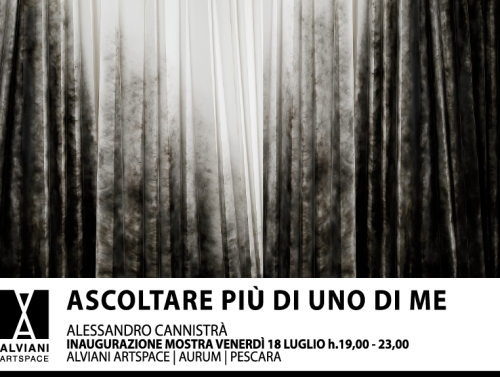 Alviani ArtSpace presents Ascoltare più di uno di me [Listening to more than one of me], the new project by Alessandro Cannistrà curated by Marco Izzolino. The installation and total work of art of this creation advocates the idiom of abeyance and makes full use of smoke, fire and matter to connect to the most advanced experimentations of the 20th century avant-garde.

Many of the elements present remain concealed and latent: upwards tension, weight, colour, the presence of external light that could hit the «painted» surface and sound. Cannistrà works by subtraction but everything is present in its potential form. The artist «conceptually» modifies the undifferentiated white of the walls in the room which bend to create a protruding and irregular moulding capable of absorbing elements within and foreign to the environment along with the imagination and suggestions of those who walk into the installation. Like an even fog, the carbon black hinders any possibility of orientation, meaning that any possibility is open. All it would take are a few changes in composition and viewers could believe they are getting a glimpse, at something corporeal, the «ghost» of a figure. The (ancestral) feeling is one of being in the thick of the woods; the dim light creates large shadows that are projected beyond the outline of bodies and the images of tales and people’s memories. Upward tension is converted into tension towards one’s interior being and the necessity to express it. There is a definite object at the centre of the installation that is smooth and with sharp corners which eludes the force of gravity but capable of magnetizing thought. 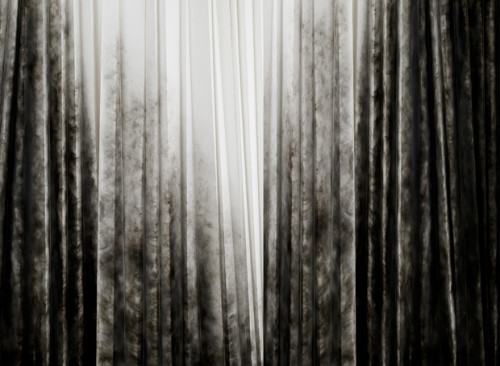 This exhibition summarizes, for the first time, two years of the artistic quest of Alessandro Cannistrà and represents the beginning of a collaboration with Alviani ArtSpace and the various areas of contemporary art research in Italy. The idiom of smoke and fire conceptualized in Milan’s «Officine dell’immagine» Gallery was used for an exhibit recently displayed at the «Centro Cultural Borges»  in Buenos Aires organized by the Italian Institute of Culture in collaboration with the Italian Embassy and the Government of the City of Buenos Aires. Moreover, this work was exhibited last year at Studio Lab, the «Liquid Art System» Research Department in Capri. The object of thought was presented as a special project of the Galleria Toselli at MiArt 2014.

Alessandro Cannistrà was born in Rome in 1975. He lives there most of the time and divides his work between Rome, Milan, Berlin and Buenos Aires. He participates in contemporary art seminars held at M.L.A.C. Museum Workshop of Contemporary Art, La Sapienza University of Rome. His work has been frequently exhibited since 2006 in both Italy and abroad: Abu Dhabi, Art Basel (Basel and Miami) and the Art Stage Singapore. He has also collaborated with international curators such as: Andrea Bruciati for his personal exhibit «A.C.» at the Officine dell’Immagine, Beatrice Buscaroli, Lorenzo Canova for the 15th Rome Quadriennale in 2008, Simonetta Lux for «2800 Gr», Manuela Pacella for «Les intermittences du Coeur» in 2012, Fabio Campagna «Bases» in 2011 in Berlin. Some of the other exhibitions include: «Ludicantropia» Galleria Pio Monti, Rome, «Inner Homeland» Belfast (UK), «Oggetto di Pensiero» Toselli Gallery, the 54th International Art Exposition, the Venice Biennale and the 10th Contemporary Art Biennial in Cairo, Egypt.