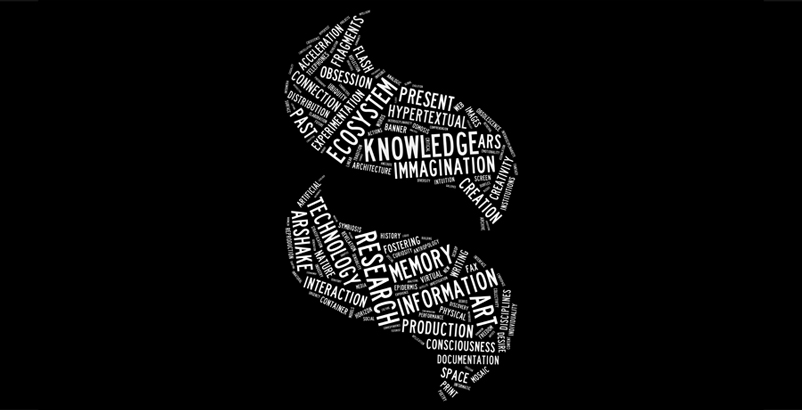 Today, October 1, 2013, ArShake. Reinventing Technology is finally on line. This date marks a moment of transition from a private dimension – lasted almost two years – to a public one, important moment for its taking shape and life.

This one we’re going to disclose to you, is a container of experiences and stories that deal, through creativity, research and information, with the technology as this has unfolded over time, crept into the modernity’s rhythm, close enough to be able to act undisturbed.

This story’s narrator voice is the art, with its works, its protagonists and events, with anything the creative sensitivity reveals to our eyes, with all that is hidden behind the homogenized interface of commonplace.

In an interdisciplinary grid, art leads us to the ends of the earth, within dimensions and different times. For this reason the site, archive, atelier, meeting and research place, necessarily becomes malleable space, elastic, able to expand into the liquid world, and occasionally retreat in the real world, able to interweave with a variety of situations, according to the interests of the moment. And to go back to his homeland more and more enriched with new materials and new experiences.

The content that lives in this new space which we invite you to follow, stands as an ecosystem, a method, a way of thinking rooted in the obsession for hyper-textual connections, running through a non-linear, sometimes capricious path, as long as it stimulates intellectual curiosity and creativity.
Logo and site design made by the young artist Cristian Rizzuti goes beyond the work of graphic. This is the first step in a job that is to combine different languages, in this case, that of communication and creativity to which Rizzuti belongs. The logo, the site, and the manifesto, become visual synthesis of an assimilated thought, nourished through time by many discussions, sometimes constructive clashes.

At this stage, it was natural to entrust the realization of the first special project to Cristian, who in his Oltre l’attesa/ Beyond the wait, we are presenting today, released his creativity and thoughts. The meeting and dialogue between him and Antonello Tolve that gave birth to the text accompanying the project, has resulted in a synergy where the written thought (Tolve) and visual component (Rizzuti) merge into one creative moment.

Antonello, who was also from the beginning illuminated interlocutor, is now part of the pulsating soul of ArShake. Tolve and art critic and writer Christian Caliandro will direct and curate the section Critical Grounds, a forthcoming splendid series of discussions and writings, new and unpublished.

All the professionals coming from different disciplines and countries, who in these past weeks have supported the project, believing it, even before having any kind of warranty, deserve our gratitude.

To learn more we let you navigate, browse, uncover the dark corners of this new collection of ideas, hoping you will come back to tell us about your impressions and to propose new synergies.