Art and technology and experimentation at London’s White Building 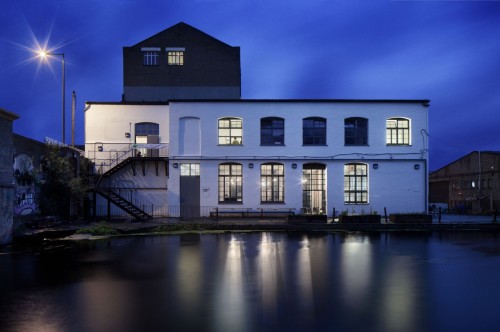 London’s multifaceted Hackney district was enhanced a couple of years ago with the founding of an avant-garde cultural centre designed for young artists and the local community known as the White Building.The building was originally a part of the Clarnico Sweet factory, later used as a Print Laboratory. The renovation was conceived in such a way as to use the building’s dimension and flexibility to maintain its identity and allow for the realization of various genres of artistic and cultural projects.

As opposed to other similar projects of redevelopment, White Building design team’s main objective was to uphold the concept of creative space built with and for the local community. This is why suppliers, artists and building experts were active participants through every stage of the refurbishment. The result is a building that came into being thanks to many people and is frequented by many people. It is a kind of crucible for young talented artists thanks also to the educational exhibitions and resident artist programmes it hosts; a display case for a broad variety of cultural projects in constant succession and complete with a refreshment area that has become quite popular in London.

Most importantly, in a relatively short period of time the White Building has been converted into a marvellous incubator for projects and exhibitions born of the synergy between art, science and technology. The upcoming exhibit outfitted in the past few weeks is an end-of-residency show for artist Gretchen Andrew. Entitled Shared Boundary: Painting as interface, it was created with the use of Google Glass – worn as the artist’s glasses – during the production of her paintings and later converted into video format, making it possible for spectators to participate in the creative process that brings a work of art to life. Gretchen Andrew’s reflection and consideration extend to our daily use of the mouse, remote control and other devices, how they are similar to a portal between the real and virtual world and the way in which we all choose to select and exchange information.

The Machine for the automatic distribution of works of art

The Machine for the automatic distribution of works of art