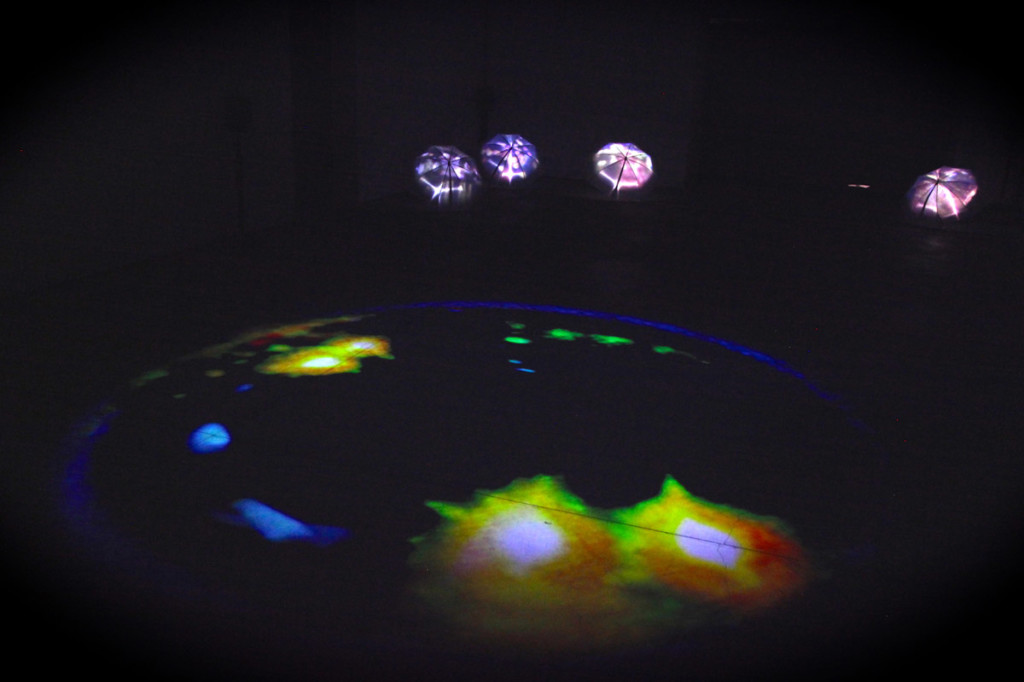 LABoral Centro de Arte y Creación Industrial presents the project Lightscape, developed by the Taiwanese artist  Chi Po-Hao during his production residency at the Centre. This proposal is part of the agreement signed, for the third year in a row, between Gijon’s Art Centre and the National Taiwan Museum of Fine Arts (NTMOFA).

Lightscape explores the relationship between the light and sound elements existing in several routes through the city of Gijon, identifying the co-relations between the density of artificial light sources and the acoustic level, and comparing it with cities like Taipei or New York City. The result of his work at LABoral is the final work presented today: three videos and an audiovisual installation in the Hall of Projects of LABoral. The installation consists of a sound-generative piece based on a 360º video recording taken in the streets of Gijon and set up using eight audio channels. Moreover, the installation also consists of several umbrellas, that serve as the screen of a micro-projector manufactured by the artist himself at LABoral’s fabLAB Asturias, and interact with the sound composition. These works will be on display at LABoral Centro de Arte until next December 11. 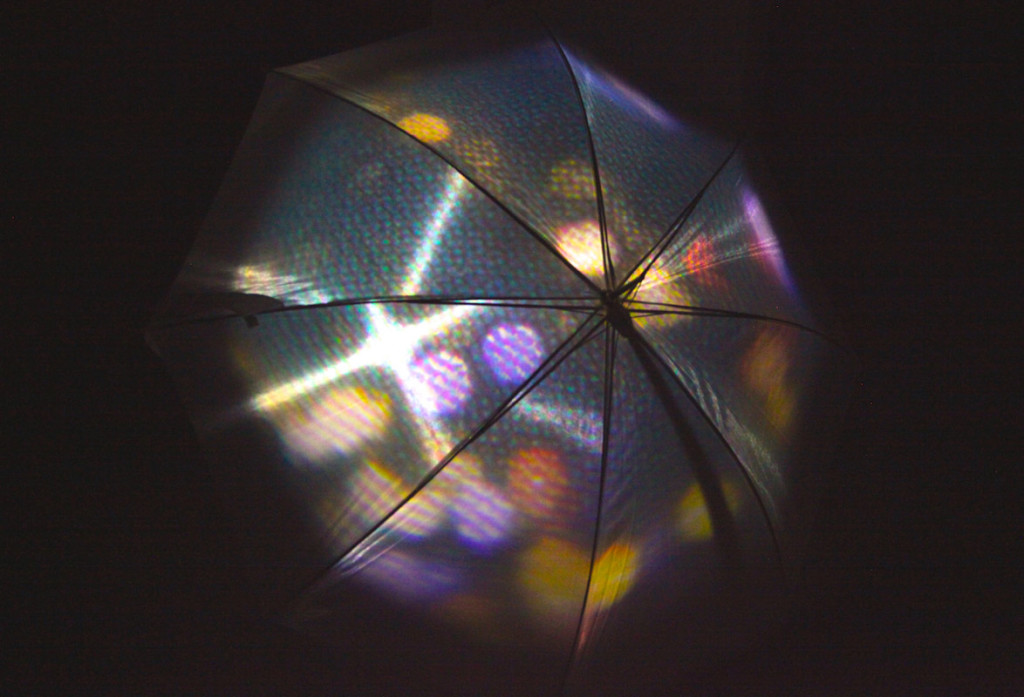 The project aims to capture and transform the artificial lights of the cities at night, depicted as visual elements, moving images and performances. The goal is to explore the relationship of the city as interface and the artificial lights, and the way it is perceived by people, the artist identifies the changes in lights and shadows that correspond to different images and sounds.

In Gijón he has worked in several streets that are located between LABoral Centro de Arte to the heart of the city, crossing the districts of La Guía, Las Mestas y La Arena. This work is like a music schore where the public lighting, the lights of the shop-windows, the traffic lights, the noise of cars are the core of this musical composition. 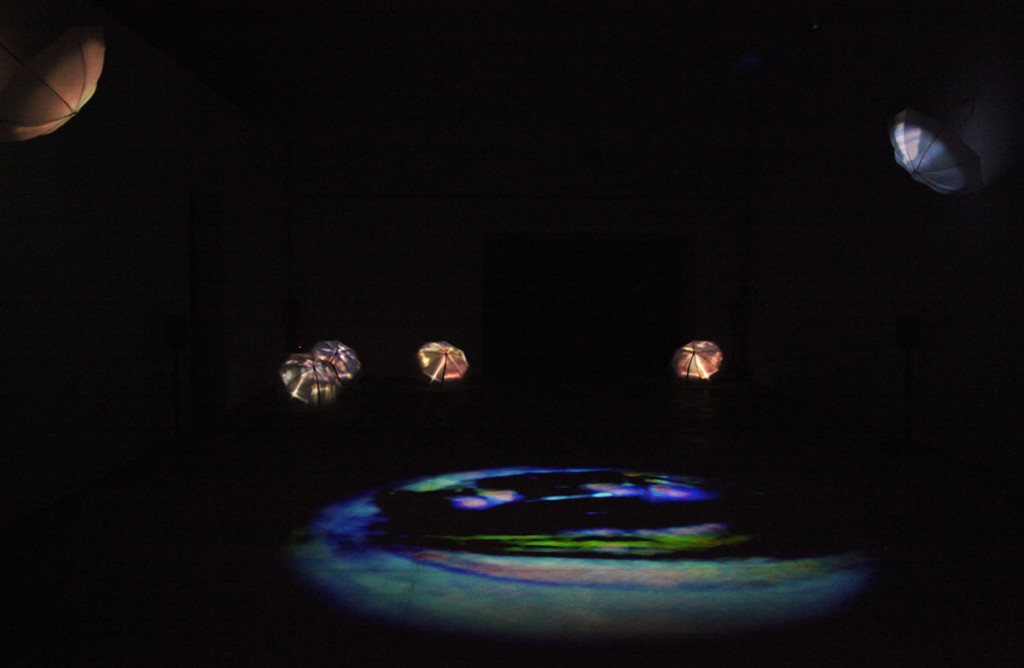 In addition to the streets of Gijon, Chi Po Hao has worked mainly in the fabLAB and in the SoundLAB. In the words of the artist “I tried to feel the differences between a crowded city like Taipei (his home town) and a relatively large and modern place like Gijon”.

According to Po-Hao “The lighting system enables people to leverage the night to expand their moments of recreation, and consumption is not limited to dusk and dawn, as well as the weather conditions and other natural rhythms, neither has it anything to do with feelings and the differences in the life style of individuals. Thus, people finally have the ability to programme all chores in their daily life.”. 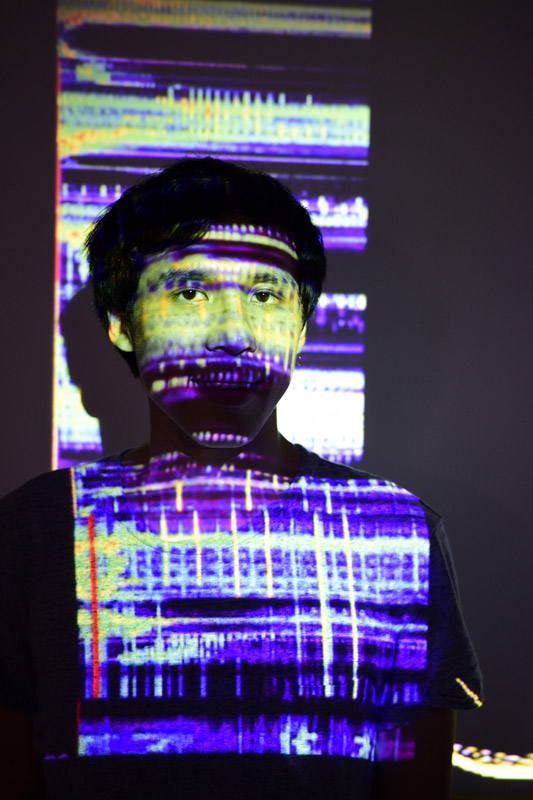 Lightspace, installation by Chi Po-Hao, artist in residence, realized  in collaboration with the National Taiwan Museum of Fine Arts (NTMOFA)

Chi Po-Hao is a Taiwanese sound artist and musician born in Taipei. He completed a masters course on music (Goldsmiths College, University of London) and a masters degree in Economic Science (National University of Taiwan). His main field of work is sound, in particular live electronic music, installations and electro-acoustic compositions. In general, in his live performances he uses objects designed by himself or recovered from any electronic devices, daily-life materials and waste. His current work focuses on the perception of rhythm and the interactions existing in this process of perception. The artist aims to discover how we listen and interpret the sound around us and the form in which it is represented.