by recto/verso collective
in focus 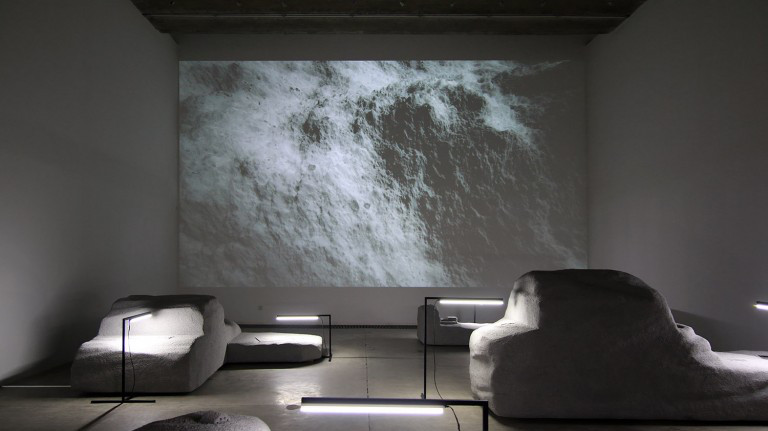 Arshake is pleased to publish the second part of the interview of collective recto/verso to Gregory Chatonsky, French/Canadian conceptual artist whose work focuses on the relationship between technology and affectivity, co-founder – at the dawn of the Internet – of the online collective  Incident.net.

recto / verso: You consider the flow as a source of criticism of the metaphysics and of another Ontology that you call “a-human”. Your project Telofossils is a kind of archaeology of the future, can you describe this scenario? What connection exists between this imaginary future and recent theories about the Anthropocene?

Gregory Chatonsky: Télofossiles was created in collaboration with Dominique Sirois, in 2013 at the Museum of Contemporary Art in Taipei and in 2015 in a gallery in Beijing Caochangdi. It all started with the creation of a word in 2009, Télofossile, and an image: a mineral world where mankind has disappeared, it remains only archaeological evidence. Another intelligence (organic? Machinic? We do not know it) discovers this remains and tries to restore what we have been. This knowledge is incomplete, but it gives back the picture of what we were. This speculation on our demise is of course a way to generate the conditions for a reflection on our contemporaneity and on the status of our fanatic production. What do we do when we create millions of identical objects? What desire is at work when we store more and more existential data whose interest is often minor? Why, even when survival conditions are collapsing, we always produce more by filling up a world that will soon be emptied of our presence? Anticipating our demise is to open a paradoxical aesthetic speculation, since it is through the imagination of our absence that we can fully grasp the conditions of our present. What happens to each individual when they becoming aware of their certain death is that they fully support life, could well apply to our species as a whole: accept our demise (as species appear and disappear) as the enhancement of our lives. It is by finding out if the word Télofossile existed before that I discovered Après la finitude (2006) by Quentin Meillassoux and his antonymous concept of archéfossile. I know how the “new” materialism, realism and accélérationnism are fashionable and have often been overused in the field of contemporary art, but it was fun for me to see how some of my artistic intuitions joined the writings of Meillassoux, a posteriori. The theories of the Anthropocene are multiple. They are often divided into two parts: the first is scientific and consists to describe objectively the influence of humans on the environment. The second is more ideological and can consist of a denunciation of the bad influence of humans on Earth, according to the Christian figure of the Fall and Evil, or of a will to save mankind from itself as an ambivalent logic of the pharmakon, since we would be both the poison and the solution. I confess that I feel closer to ahumans theories that consider the Earth in its autonomy and recognize that organic species disappear. In the fierce desire of human beings to survive eternally, one current expressions is transhumanism, there are strategies that could well produce the opposite of what they believe enact.

What is the role played by technology in this scenario of the end of the world? How could technology become a memory of human history?

Following Télofossiles, Dominique and I and in collaboration with Jussi Parrika conceived the project Extinct memories in Quebec and Brussels specifically turning us to the issue of technological archaeology as a memory of our species. Technologies were often considered as the possible cause of human destruction as a promethean logic, but their role may also become an ahuman memory, as if we produced the conditions of our exceeding. Each technological object carries in fact the trace of missing persons: the designer, the artisan, the employee, the user, etc. On the objects, we see the patina of fingers and uses, the passing time. Therefore, the objects around us can be considered as tombs. Horizon (2016) shows how the Web is not immaterial, but is an heavy infrastructure that dream of its immateriality and its immunity, at a very high cost. This also raises the question of Web conservation and archaeology how the collective memory created and communicated through the Internet is selected, preserved and transmitted by private companies. This is a subject which also comes up in Extinct Memories where the main character, Urs Hölzle, is the head of Google’s infrastructure. Today, are we able to organize and preserve this heritage? What if this heritage is constituted in the absence of human beings? What if it was destined to machines? What if all these anonymous existences allowed the machine to form a double, repetitive enough to be likely and different enough to be unique?

Incident.net is an artistic platform based in France, Canada, Senegal and online since 1994 and meets around the concepts of accident, bug, unpredictability and network. How it is structured and developed between its different creators and participants?

Incident is one of the first “collective” of netart. I place the word “collective” in quotes as this word seems problematic. Without doubt I would prefer the word “platform”. The idea at first was to blend discursive and artistic practices, to make them indifferent, as the separation between theory and practice seemed obsolete. So it was speculation around and in the network. We gathered a few philosophers of Paris I, a few artists of Fine Arts of Paris. Soon, we were interested in textuality, narration, variability. I think what continues to unite us is a sort of affection for the network and a certain way of working. We have not published a manifesto, we produced short texts that we exchange. Sometimes we discuss of our artistic projects for the other to be present from the conception stage. It is a way to be very fluid and flexible. Very emotional too. Looking back, I think we have traced a particular path in netart. It is not research on the autonomy of the medium, in the modernist way of net.art. It is not immersive and sensory as digital art. It is interested in small stories, in worlds that might arise. 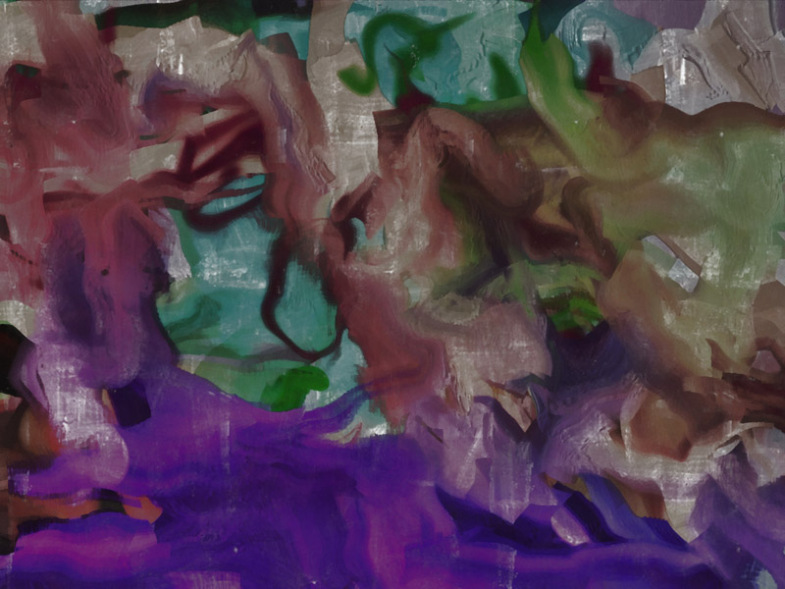 In a text that we recently published for h/d Kepler we ask ourselves questions around the issue of originality in contemporary society. Here are some that we want to ask you: are we indifferent to the notion of authenticity? If digital art is an open, freely editable or hackable system, is the being open part of the definition of digital art? Are we indifferent to the question of originality of digital works just because it is difficult to calculate their economic value?

The question of originality is complex, because even if it seems to be obvious in art, it is a historic concept. Ancient art began by copying, by the transition from one civilization to another. This mixing created something new between the Greeks and the Romans. We could call it version, a form that becomes another form, a cultural and historical flow. The appearance of originality is less about matter than a certain understanding of subjectivity with the late figure of the artist. This is because if the artist would be absolutely original then the object would be too. The originality concerns the origin. With digital, we return to a materiality, which is without origin because it is has already been given. I believe that to define what we are sensitive to with the digital objects, we should locate its materiality not in a specific form, not in the code that refreshes, but in a flow, which may include a variation, and that binds organically with the flow of our consciousness. As for the relations between originality and the value of an art work, we should deconstruct this question seeing that the value is not inherent to the object, but to the institutional relationship. The value comes from outside and takes it to the outside, as a hydrological system. Somehow, and to be quick, we are returning with the digital néomatérialisme to the normal. Capture, a fictional rock band I founded in 2008 with Olivier Alary, questions the status of originality in contemporary society. It is an ironic “solution” to the crisis of cultural industries. Indeed, for years, the music industry (and also the cinema and the press) continues to stage its own disappearance, because online users download illegally mp3 files. Capture is so productive that any person can consume. It produces every hour new music, lyrics, images, videos and products. Each new file is automatically translated into other formats. If an mp3 file is downloaded once, it is deleted from the server thus the “consumer” becomes the only possible diffuser. Submerging consumption through generative technologies, Capture reverses consumerist ideology and the relationship between desire and objects. Being very productive, Capture exceeds the same opportunity to be heard.

Regarding the practice of appropriation and reinterpretation of “analogue” artworks by a digital medium, what exactly was the process behind the series “It’s not really you?”

“It’s not really you” is an artificial neural network that I have fed with thousands of images automatically retrieved on the Web. This network has learned the forms, but also the styles of these human paintings to generate new images. These resemble the original images, but they are not identical to any of them. Repetitive and therefore different, the artificial intelligence created a different version. The operation of these neural networks is interesting because they are schizophrenic. A part of the software generates images and another part checks if the result is “realistic.” It’s like if a human part had been delegated to a split machine and the Turing test was effected at the heart of the “black box”. These images are then printed with the 2.5D process that provides a relief printing to simulate to completion this resemblance “uncanny valley”. The Internet is perhaps not an interpersonal communication medium as was often believed. Perhaps with the network we have to connect two heterogeneous series, anthropological and mechanical series. Web 2.0 was to delegate to users the creation of data, using the machine to record our behaviors and memories in an explicit or implicit way. These records allow forming large data sets that machines can treat to learn from us and replicate our data. This convergence between artificial neurons and big data, I name it neural.net. The machines produce a version, likeness and new. I think that it’s this tiny difference between the two series that bears my work in recent years.

The interview (Aesthétique des Flux. Intervista con Gregory Chatonsky) originally appeared on recto/verso‘s platform as part of the issue #4 of an online thematic magazines dedicated to Online/Offline, following a conference dedicated to the theme  organized in Athens by HD Kepler, two artist-run spaces 3 137 and Enterprise Projects. recto/verso is a research collective of widely understood curatorial practices aiming to broaden experiences while investigating the nature of images in contemporary society.

The interview was published on Arshake in two parts. You can read here  the first part of the interview.

In conversation with Gregory Chatonsky. Part I