Arshake leads from the time-based installative interventions by Italian artist Chiara Mu at Albumarte in Rome to open a polyphonic discussion  on the presentation and acquisition of ephemeral works. This is the first of a series of conversation involving Pietro Gaglianò, Chiara Mu, Elena Giulia Rossi.

On Wednesday 28th January 2015, AlbumArte was the venue for a public meeting between several people invited by you, Chiara, and curator Maria Rosa Sossai; professionals from various fields in the world of art – critics, collectors, museum directors, magazine editors – all with wide experience in the sphere of performance art, which was the subject of a discussion open to all the participating guests. At the centre of the debate were the paradoxes created when works that live «in» and «with» time (and space) are presented as «collectible pieces», in particular when they are stripped of fetish objects (or photo or video documentation), as the memory of an action which is often elevated to art itself. This encounter was the preamble to the true project, From Here to Eternity (AlbumArte.18 .02 – 01.03.2015) – a promotional event for a CrowdFunding campaign, which in itself was part of an exciting provocation in terms of selling a certain amount of time with the artist as an exchange of goods.  Just before I came to join you at that meeting, I finished reading Re-collection. Art, New Media, and Social Memory (edited by J. Ippolito and R.Reinhart for the Leonardo series), the latest essay on the conservation of the new media; a topic which interests me and which in practice is enormous, when denuded of the self-referentiality which the second of these terms may suggest. I realised how close together the themes are when we talk about ephemeral artworks. From this entire operation – completed and ongoing – I would like to begin at AlbumArte, talking with you and with Pietro, who has a lot of knowledge and experience in this field, and continue the conversation in a kind of oral exploration and documentation, as you yourself, Chiara, maintained on the evening of that encounter, when you expressed your views on the conservation of artworks.  I would also like to intertwine the memory of this project, by capturing its salient moments, with experiences from other spheres, such as media art, or other mediums operating in the same fluid dimension of time and space.  But now I’d like to let you speak, and thank you for agreeing to this strange interview format, which might continue in subsequent instalments. 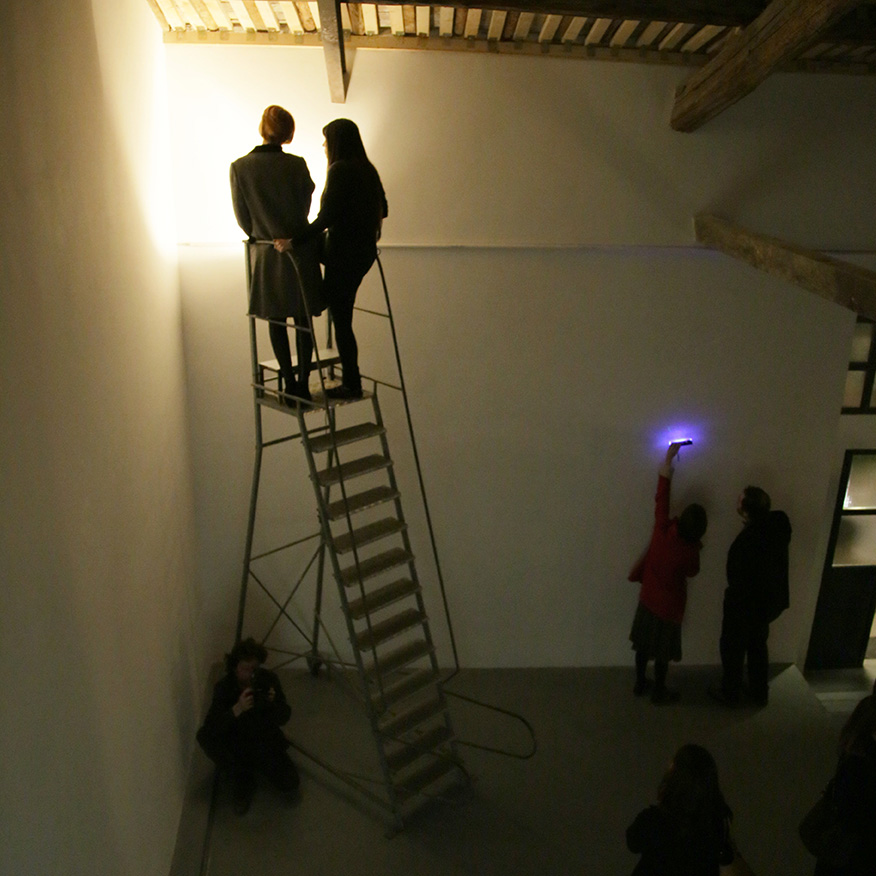 Pietro Gaglianò:  Before we start I’d like to point out that Chiara Mu succeeds in synthesising thought itself, with such a highly informed theoretical concept, while never becoming didactic about the forms her work takes: her performances retain a symbolic dimension and open routes of vision and knowledge which are independent of her reasoning.  I believe that this is due as much to her authenticity as an artist, the particular quality of her work, as to her London training which makes continual comparison and examination habitual. And this is also indicative of a visible maturity in terms of her theory and critique of Performance, which is extremely emancipated (beyond the rigour of definitions) and not at all approximate (free from coarse Mediterranean interpretations of performance).

Chiara’s work, and the discussions she herself stimulates around her work, opens the question – one among many – that I have been pondering for some time, of the obsession with the visible which is prevalent in North Atlantic culture. Tangibility is no longer so important (in the past thirty years widespread marketing campaigns have to a large extent dulled the need for physical possession, replacing it with gratification through possession of the icon, the logo and other idols), but what does remain essential is recognition through sight: the visible continues to be the token of existence, it proves reality and, above all, ensures transferability (and hence belonging to the world of tradeable goods). And thus we could say that the primal and scandalous nature of performance moves to dynamics which engage other faculties beyond that of sight – which of all the senses remains the most tameable and domesticated to the imperatives of habit and custom.  The open relational space of Performance enjoins a participation which goes beyond all the slogans and instrumentalisation of the term, which does not admit superficial viewing and which loads the journey through the work with values which cannot be reified or reduced to the level of the visual. The audience is not always ready for this, and today perhaps even less so, considering that hetero-directed inactivity has taken the place of true reactivity, the ability to reinterpret reality with one’s own code. I wonder if Chiara was seeking to deploy a relationship of precisely this kind: are the actions you present in this project moving in this direction? 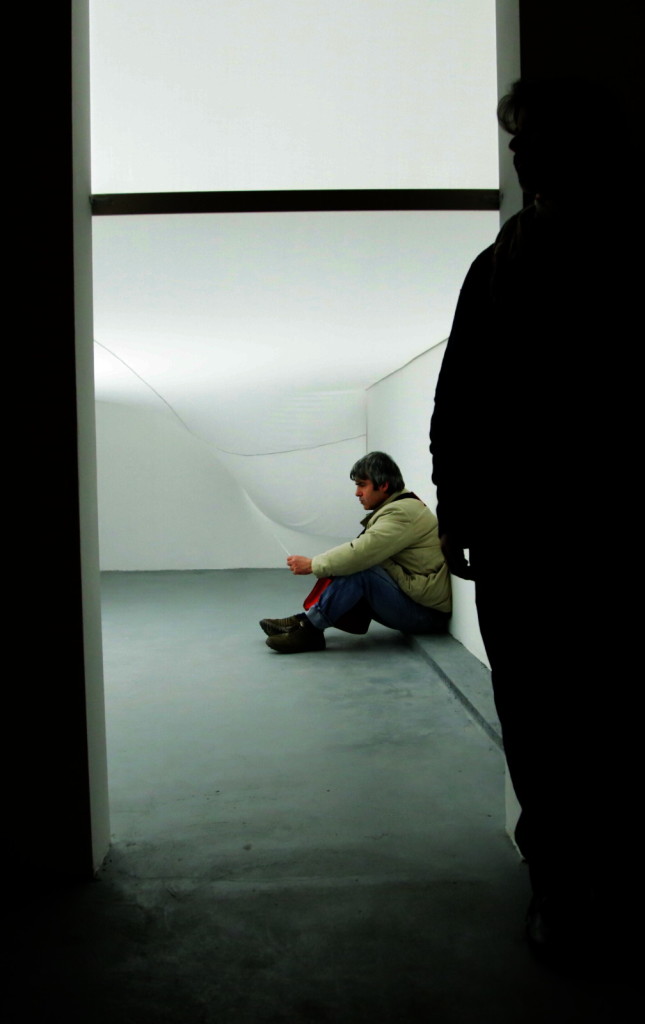 Chiara Mu: They are certainly going in this direction, and rather fast, I’d say! I agree with much of what Pietro has said about the obsession with the visible and how today this still leads to a reification of performance art through the production of documentative images, with the usual old «misunderstanding» through which it fully becomes a true work of art, to be sold and circulated (with the consequent raising or lowering of the market value of artists involved in performance art…but these dynamics are well-known). The scandal I seek to inhabit is precisely that of doing performance in another key. I’m interested in putting forward a relational method which, as you rightly highlighted, impels people to experience the work using – besides sight – everything they have available to explore a situation and appropriate it in every possible way… so, shared listening, sense of smell, touching and being touched by others, opening one’s own time to the time of the work, conceiving that the body takes the form of the space if only for a few seconds…in other words, acceptance of a permeability which fully defines the aesthetic experience offered.

For example, each of the actions in «From Here to Eternity» offers a specific modification of the visitor’s posture, and I don’t think anyone notices this at the beginning; it’s an awareness that emerges later, at the end of the exploratory journey in the space.  I designed these actions to be consistent with the ongoing research I am doing with my site-specific work, or rather wishing to explore and define in every context a physical and emotional relationship between body and space, in this instance contemplating the fact that our body is objectively the first architecture we know, and which we have to manage every day. 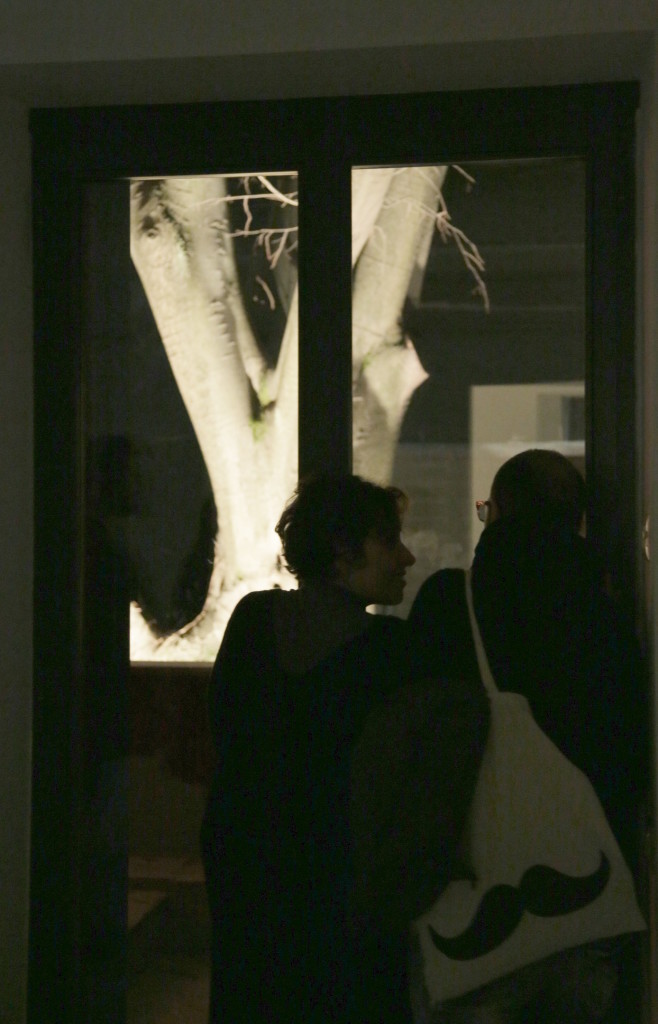 Returning briefly to the obsession with the visible, I was told that during the opening some visitors (more or less known in Roman art circles), having queued up to get in, then left rather quickly, perhaps annoyed that they didn’t understand what was going on within the space.  I was really aiming for this «conflict», and I didn’t want any leaflets or room plans; I am aware that I brought to AlbumArte a show that is not at all simple from this perspective: there was nothing to see, no pictures, no projections, no objects… just points of light in the semi-darkness and scattered people.  Do you remember, Elena? With a little more attention and less consciousness of the passing of time, they would have realised that they were gradually being «chosen» and taken by other people, wishing to bring them into a private conversation for two, a personal dialogue on certain elements of the space. I wanted, I really wanted, to select my audience so as to embrace visitors who were open to greater effort, confronting their proverbial passivity to enable them to subsequently enjoy an intense, true and engaging exchange on both sides.

Elena G. Rossi: Dear Chiara, I remember that perfectly.  It’s very easy to get annoyed if something doesn’t grab you immediately. That’s exactly how I feel most of the time when I go to shows, to see performances or videos that perhaps I haven’t the patience to watch to the end.  But in this case, despite the fact that I arrived in a state of exhaustion that made it hard to think of finding the energy for contact with others, something grabbed me straight away. It was like when your eyes get used to the dark.  You just needed to concentrate for a moment to detect something strange in the air, and, at that point, perceive the intimacy created in every corner, so many tiny islands, bubbles of energy to be experienced two by two.  That evening I wasn’t chosen. It was almost a relief because every contact requires energy, and that night I had none to give.  However, I was able to breathe the atmosphere as a voyeur, witness the desire to be chosen and captured within the bubbles.  Now I’m really curious and ready to try the experience next week.  And then I hope to continue our conversation.  It would be great to go back to issues related to the acquisition of performance artworks, or rather, ephemeral artworks, as you have just told me, Chiara, that instead of performance you prefer to define your works as «site-specific interventions» – to this I would add research-based; experiential externalisations of pure research.

Pietro Gaglianò: To consider the subject of acquisition, I’d like to talk about an important condition that the audience assumes in this sphere of action, starting with that willingness to be a part of the process that you refer to.  In your description I perceived the beginnings of the «desiring machine» that Gilles Deleuze recognised as a positive and productive expression in individuals animated precisely by propositional energy.  The performance space produces this same kind of superimposition between actor and acted upon, in the sense that it undergoes an urging which activates desire.  This can lead us to the origins of Performance, and open up the question of the guarantees that any kind of acquisition can give regarding the dynamic nature of the material under discussion. Besides the question of how to conserve it, there’s a more important query as to where: would the exercise of this desiring flow really be possible under different circumstances than the public or semi-public? (…to be continued)

Images (all) Chiara Mu, From Here to Eternity AlbumArte, site-specific intervention realized for the day of the opening  (18.02.2015)