Daniel Rozin. Reflections at the Mirror

by Caterina Sinigaglia
in focus 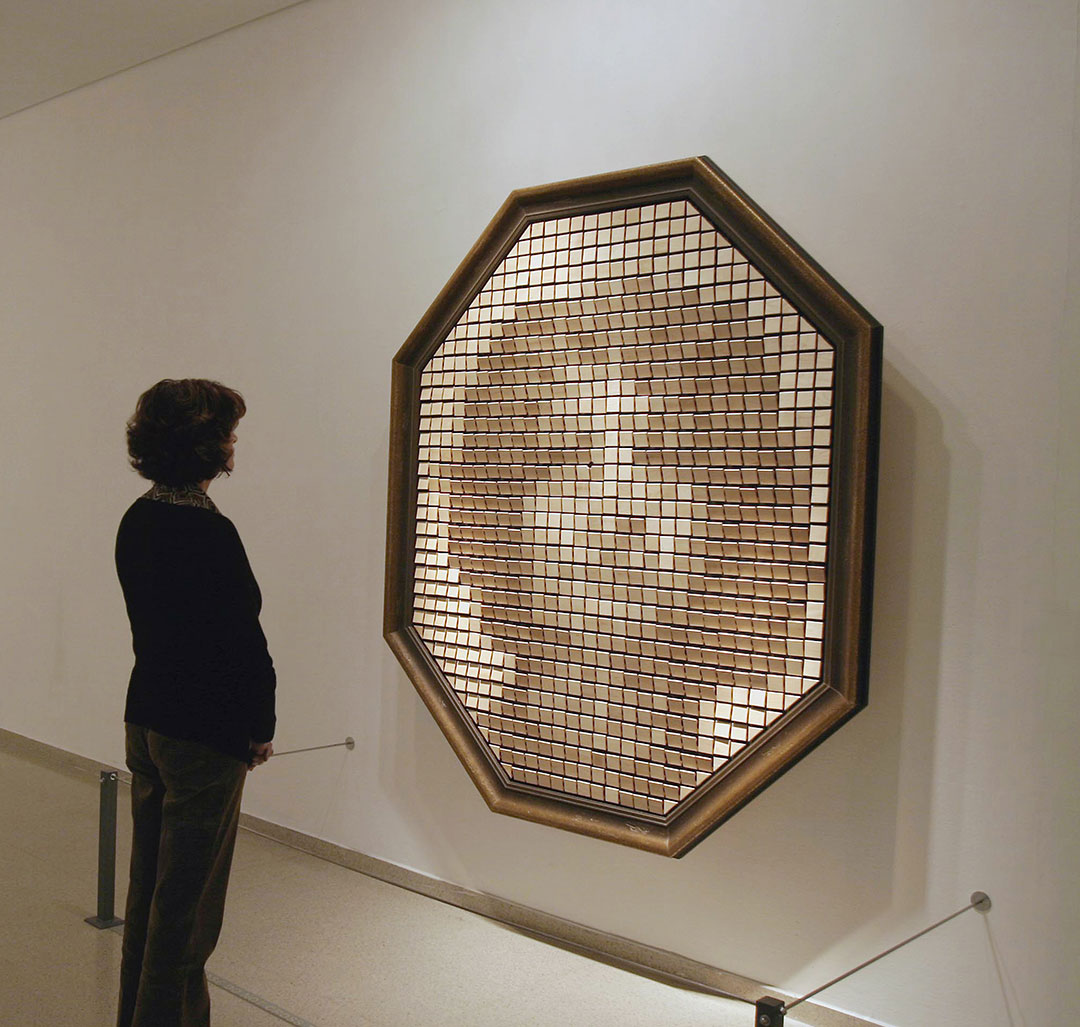 Daniel Rozin is an artist of Israeli origin who lives and works in New York. He works primarily in the area of interactive art and through the continuous exploration of an almost symbiotic relationship between author and spectator (or better, participant). The vehicle he adopts for the most part is the series of mirrors he began creating in the late 1990s. The first of his mechanical mirrors is Wooden Mirror (1999), an installation capable of reflecting the image of any person standing in front of it with the use of a hidden micro-video camera, reducing it to a limited number of pixels and duplicating it to the observer with wooden tiles. These are put into motion by motors that modify the shot’s angle, causing them to project shaded areas of different intensity so that the observer is reflected in real time. The final result is a combination of installation, screen and mirror. A means to explore the boundary between analogical and digital that makes us question the very definition of these two terms.

At first glance, Rozin’s mechanical mirrors often appear as «innocuous» works. They attract the attention of people walking by with a repetition of a series of automatic motions which create recurring patterns and geometric motifs. People are intrigued and come closer to discover the secret as soon as the movements stop their repetition and, after a moment of uncertainty, they recognize themselves in the shadows. This is how the main requirements of an interactive work of art are fulfilled: a surprise factor, something unexpected, a comic element and an irresistible recreational feature that compels spectators to make all kinds of gestures just to see how quickly the installation can reply to them. 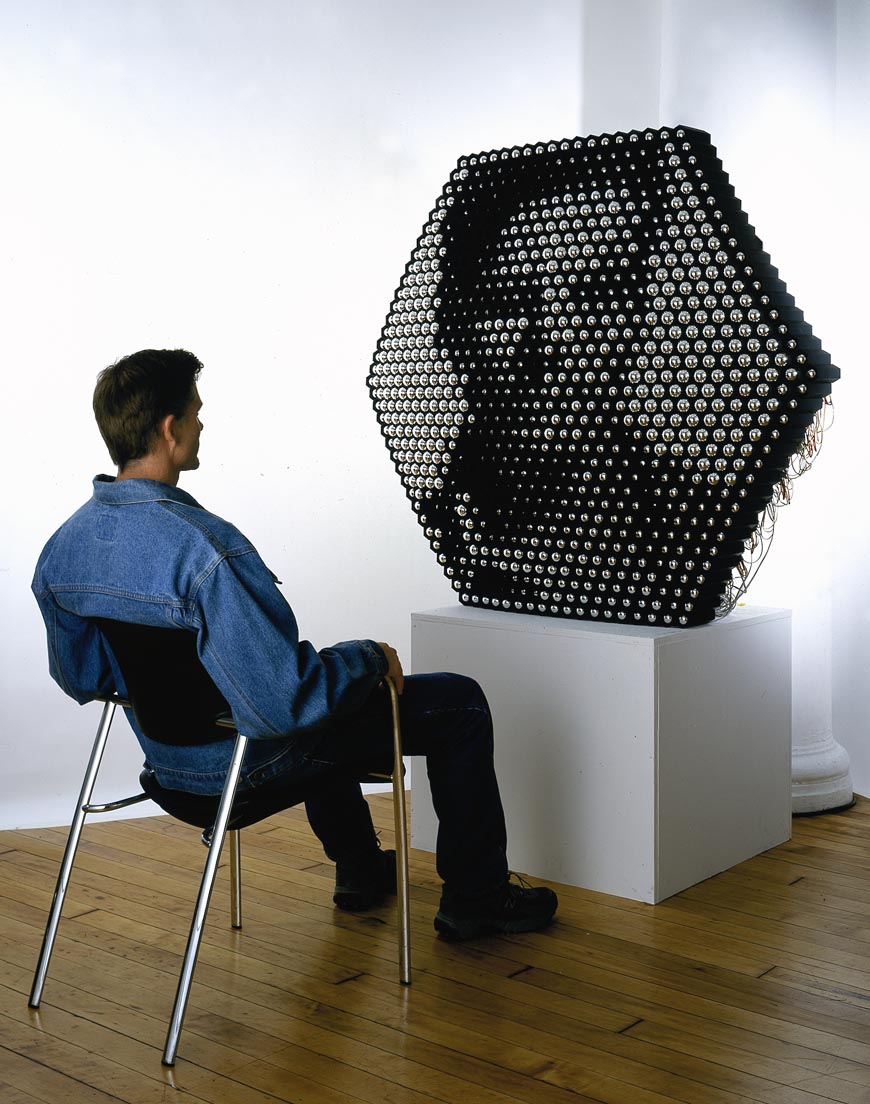 Creating a mirror with non-reflective material means depriving it of many of the traits usually attributed to such objects. The elimination of the transparency of glass excludes the possibility of recognizing one’s appearance through simple observation or getting lost in the contemplation of one’s own image. Instead, the mirror forces viewers to try all different stratagems in order to recognize themselves in what they are seeing: they are forced to verify the nature of the work by gesticulating.

The consequence of changing the fundamental characteristics of a mirror is the unanticipated freedom of being able to relish one’s reflection: there is no element here that could cause any disappointment in one’s physical flaws. Once we are no longer worried about what we look like, we surrender the control of our appearance and make room for a more playful and carefree approach.

Rozin has succeeded in emancipating the mirror from the symbolism it has been linked to for centuries: the emblem of vanitas and often one of trifling levity. With the obvious modifications brought to the traditional reflection, spectators can recover the pleasure of interacting with their doubles, especially in an era marked by the multiplication and trivialization of a person’s image. The «users» have recuperated the magic of seeing themselves for the first time. 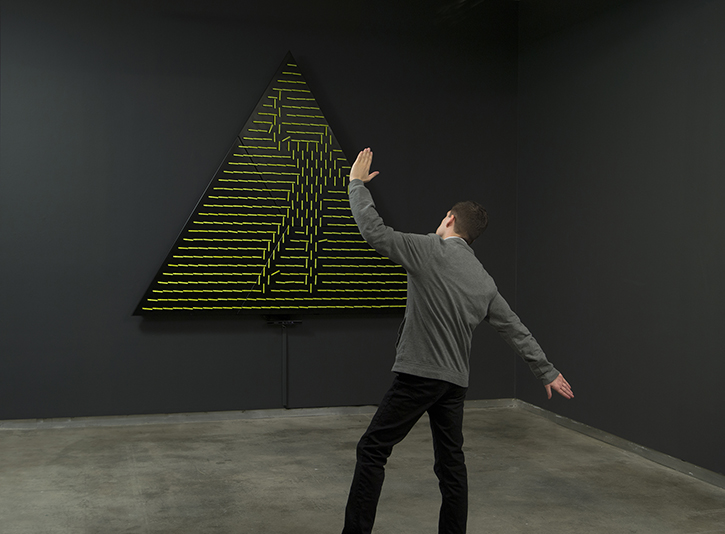 At a time when extremely sophisticated technology is more readily available, Rozin has decided to place emphasis on its limits by making us interact with a low-fi interface that has us undergoing touch and sound-related prodding (produced by the motion of mechanical pieces). Another way to examine the limits and possibilities of the electronic world is to magnify the discreet elements of the digital images by placing oneself as the final stage of a course in reverse that departs from pixel to pass through Seurat-type pointillism and mosaic pieces to finally arrive at the creation of mobile tiles. Notwithstanding their appearance, the basic operation in the works by Rozin is that of bringing a digital order to the world by filtering the chaotic data of our reality with binary numbers, so they are profoundly technological.

The artist’s output has varied over the years and has included reflections on different aspects of the perception of oneself and of reality. However, the formula-mirror has proven itself to be flexible and suited to conveying different content. For instance, substituting pixels with plastic needles (as he does in his Angles Mirror) pushes the limits of what is perceived as an image. In some cases the stakes are raised by using reflective elements in mechanical mirrors (Shiny Balls Mirror, 2003) in order to urge the spectator to compare the traditional reflected image, albeit distorted, with that created by the motion of the pieces in the work. 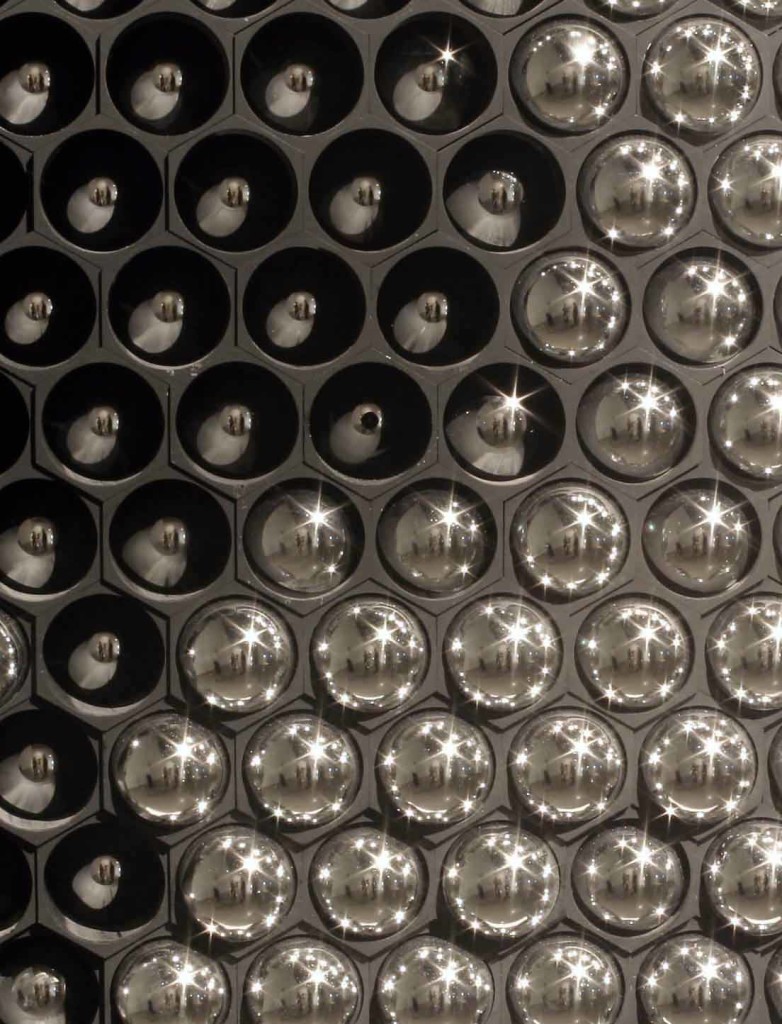 The mirror is also featured as a screen in Rozin’s software mirrors in which the reflection of the observer is made up of an image re-interpreted by a computer. In this series, the installations of particular interest are those that function as a variation on the theme of time and the mirror is a place of interaction between self-perception, duration and motion. The perfect example of this is Shaking Time in which only the moving parts of the image are in colour and updated while everything else is static, turns grey and inevitably decays.

No matter the way in which it is presented, Rozin’s work is constantly focused upon the connection with people and the encounter between the physical world and the computational universe. The user is still protagonist and never stops feeling involved and stimulated. As a trigger to a production, observers are at the core of a mechanism that questions the perception of the world, the representation of what is real and the mechanisms through which they recognize themselves as part of society and how they relate to art or technology. 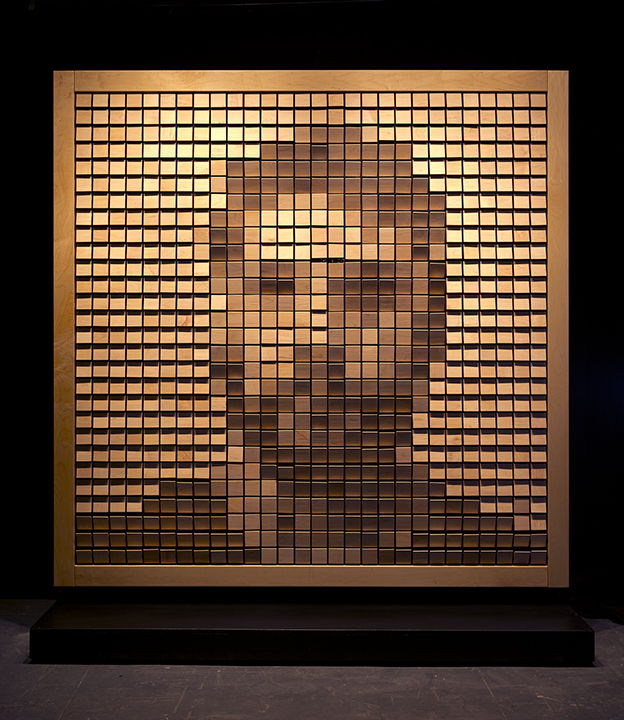