For the second project in the gallery’s Dialogue series, NOME in collaboration with Laveronica Gallery presents two parallel solo exhibitions with the artists James Bridle and Jonas Staal, with contributions by lawyer, academic, writer, and activist Radha D’Souza.

James Bridle’s exhibition Signs of Life takes its name from Werner Herzog’s film Lebenszeichen (1968), in which three German soldiers patroling a Greek island are driven mad on encountering a vast field of spinning windmills. Bridle’s new work Windmill 03 (for Walter Segal) recreates a traditional Greek windmill from the original location of the film using surplus material from DIY architecture projects  Aegina Battery comprises an electricity generator powered by seventy-two Greek lemons dramatizing the power, abilities, and knowledges embodied in the natural world. Five solar panels are engraved with images and named for five species of Radiolarian: microscopic sea creatures who construct elaborate mineral skeletons from silica. Recent optical research has shown that certain forms of engraving can increase the efficiency of solar photovoltaic panels, by trapping certain frequencies of light which would otherwise be reflected. In these works, Bridle invokes the potential of collaboration with the more-than-human world to seek regenerative solutions to the problems that we face, and the possibilities of collective education and agency. 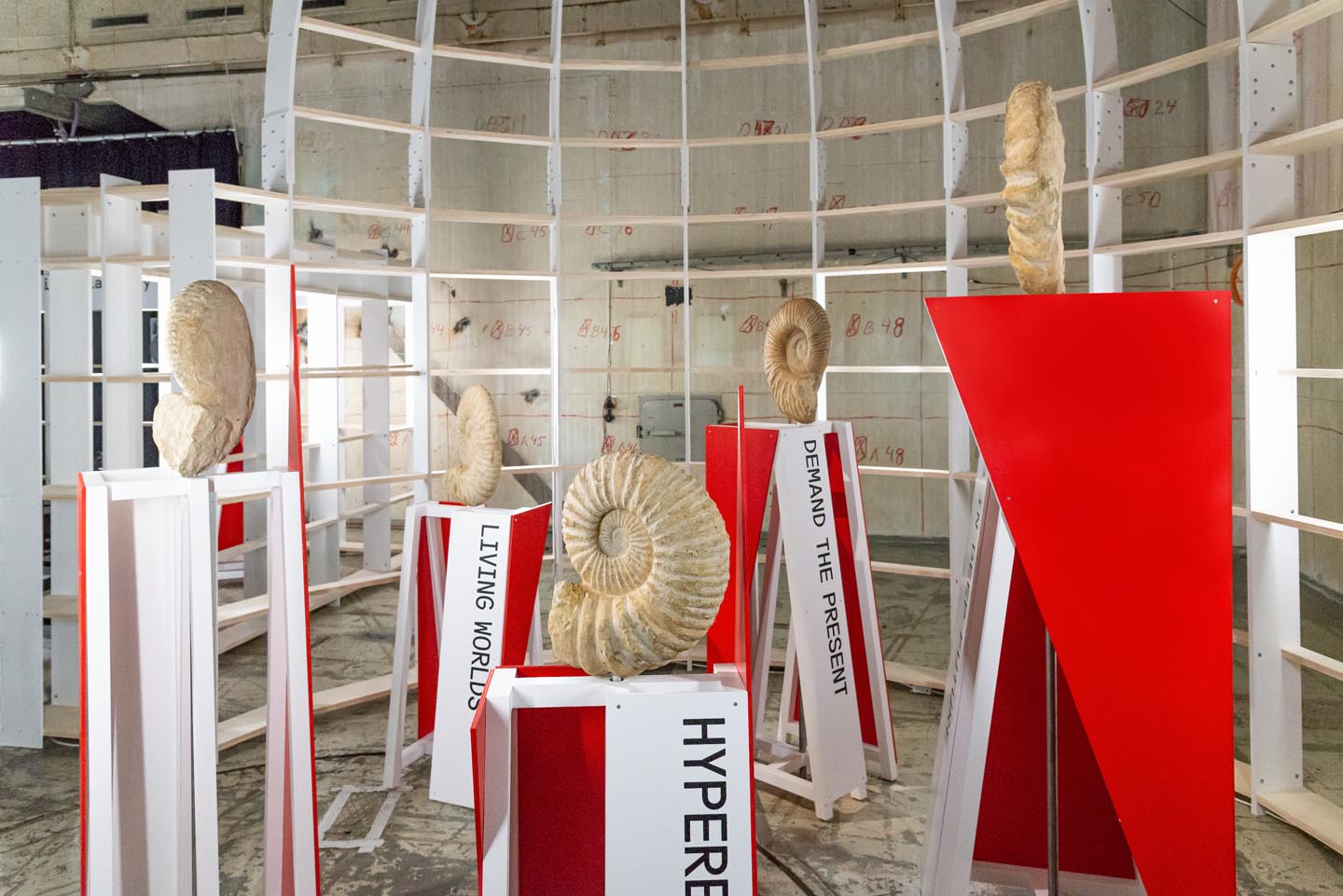 Comrades in Deep Future centers on three works by Jonas Staal that address the notion of the non-human comrade. As Jodi Dean has written, comradeship is “characterized by equality and belonging, by a love and respect between equals so great that it can’t be contained in human relations but spans to include insects and galaxies (bees and stars) and objects themselves.” The Court for Intergenerational Climate Crimes (CICC, 2021-ongong) is a collaboration between Staal and Radha D’Souza, which consists of a large-scale installation in the form of a tribunal that prosecutes intergenerational climate crimes. Interplanetary Species Society (ISS, 2019) is an alternative biosphere constructed in a former underground nuclear facility in Stockholm. While the spacefaring trillionaire class aims to colonize Mars, ISS instead turns underground: intra-planetary. Part of the alternative biosphere are the Neo-Constructivist Ammonites (2019), which build on the heritage of the Soviet constructivist and productivist artists who argued that in a revolutionary situation, objects become comrades too. Obscur Unions, for Laure Prouvost (2020) takes the form of four drawings printed as flags, which are part of an ongoing collaboration between Staal and artist Laure Prouvost. Their shared works take the form of sites of assembly conceptualized by Staal in which anthropomorphic entities such as plants, arms, branches, tongues, toxins, breasts and signs created by Prouvost gather as political subjects. Across Staal’s three projects, extinct plants, neo-constructivist ammonites, and insurgent octopi appear as part of an insurgent popular front of earth workers. Human, non-human, more-than-human, and other-than-human alike. United in a struggle for deep futures and a biosphere for all.