DiMoDA – The virtual institution launched in 2013 by Alfredo Salazar-Caro and William Robertson and currently hosted at GAZELL.iO, the digital art arm of Gazelli Art House, now presents an exhibition curated by Christiane Paul dedicated to DIS/LOCATION through the work and different perspectives by the artists Banz & Bowinkel, Ricardo Miranda Zúñiga and Tamiko Thiel residing at GAZELL.iO in January.

As is always the case with every project hosted by DiMoDA, the virtual space is specifically addressed to the commissioned works. DiMoDA 4.0’s architecture, conceived by Ayman Tawfeeq, consists of a structure that deconstructs a New York City block made up of abandoned houses and overturns them in a process of displacement, from the ground floor to the ceiling, putting decay and potential on the same level. The structure also consists of scanned 3D profiles of immigrants from all over the world which evoke another form of displacement. The selected works introduce displacement from a variety of different angles, from the feeling of disturbance to a state of perceptual adaptation and the space offered by technologies. 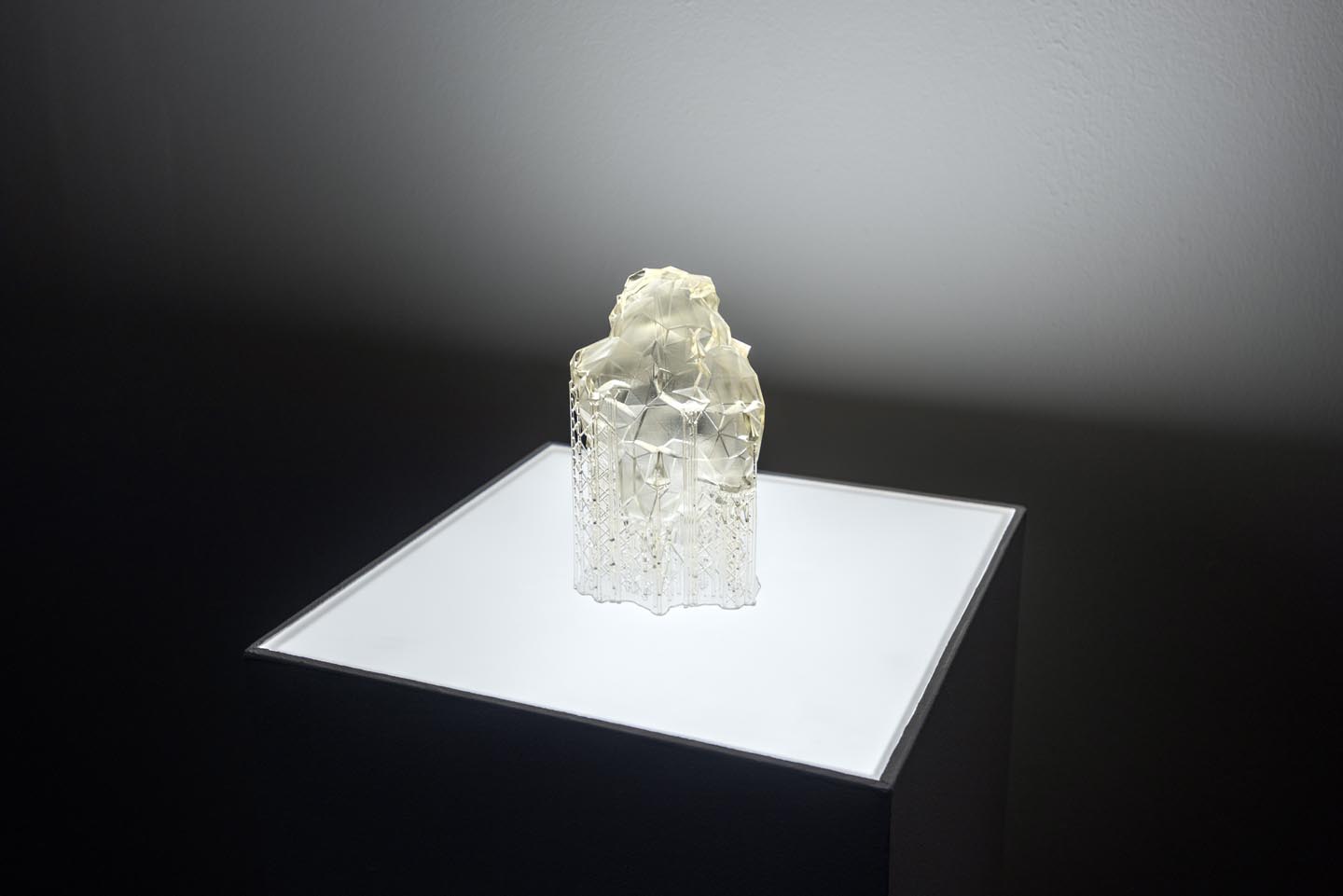 The three projects can be explored in virtual reality using special visors provided by the gallery in a dedicated room. Virtual reality, already a factor dislocating the physical and mental experience, highlights a theme that the pandemic, isolation and the displacement of our bodies in virtual worlds has made increasingly topical.

“The experience of dislocation and disturbance of one’s usual sense of place – states curator Christiane Paul –  has become heightened over the course of the pandemic, which makes DiMoDA 4.0 particularly relevant. The works in the exhibition deal with some of the most pressing issues of our time — from climate change to gentrification and the mediation of communication — and construct an immersive, imaginary space for rethinking these questions.”

Zúñiga’s Desplazados takes us to a New York neighbourhood on the Lower East Side where the inhabitants tell us, in the form of audio interviews, about the effects of gentrification.

Tamiko Thiel, with her Atmos Sphaerae traces the history of Earth through an abstract visual journey – from the big bang and the creation of myths to our present time fuelled by climate problems and on the threshold of a possible extinction of the human species.

Banz & Bowinkel’s Grid transports visitors into the consciousness of a computer where electricity generates a series of binary operations. Humanoid figures with greasy skins, wearing masks of 3D geometries based on online images, wander through space under giant transmitters hanging from the ceiling and through a series of interactions with the visitor reflect on the distortion of perception in the machinic world. 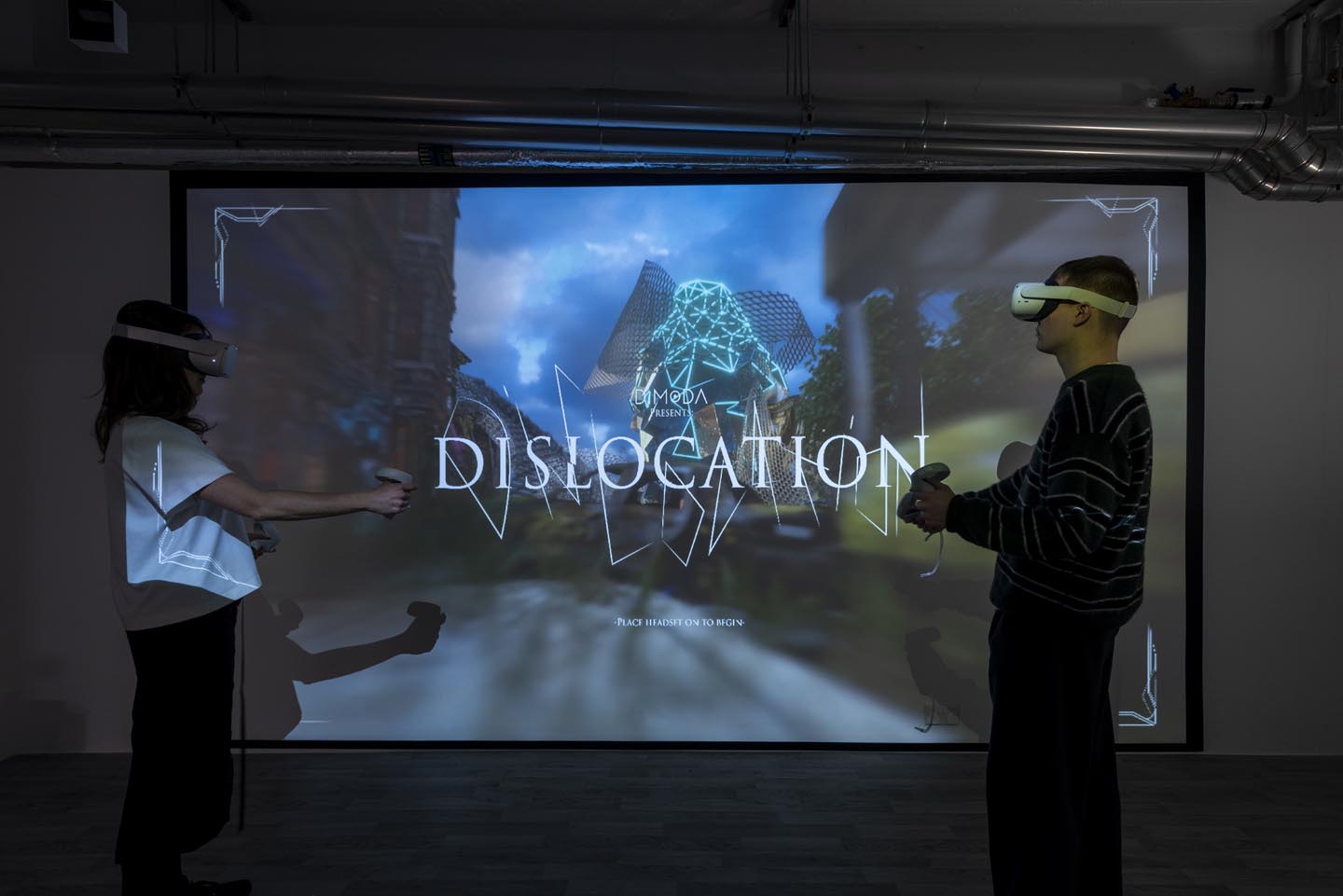 We are at a transitional moment in history, which is important and still very close to us, too close to be able to analyse it clearly. We can observe, reflect and speculate. Certainly decentralisation and displacement will be part of a new visual-perceptual dimension which we should adapt to, away from the perspective grid. This process is not new, but has settled over time until it became visible and inevitable, just as it has for all forms of progress in every field. If the Internet has increasingly entered our social but also our genetic dimension, the same is now likely to happen in its new reconfiguration, regardless of how and to what extent the Metaverse, which is now shaping from a financial operation, will take hold. There are many virtual worlds. There are many displacements moving our bodies through physical and mental space. These works compel us to think outside the pre-packaged dimensions of large companies and do so through a form of empathic and experiential communication that allows displacement to be experienced firsthand. The works, as well as dislocation itself, enables reflection within a reality, such as DiMoDA that is conceived as ‘a counterculture of V.R.’, far away from the corporate Metaverse, as DiMoDA’s curator Alfredo Salazar-Caro has underlined in presenting of the project.

GAZELL.iO is the digital art arm of Gazelli Art House comprising of physical space in the Lower Ground floor of 39 Dover Street, GAZELL.iO Project Space, and a dynamic online exhibition programme including GAZELL.iO Residency, NFT initiatives and collaborations and a permanently installed VR Library. Since 2015, GAZELL.iO Residency has offered a unique insight into the environments of some of the most recognised and upcoming VR and AR artists. The four-week online Residency allows artists to take creative control of the domain, enabling them to code their online universe, showcase their artistic journey, and interact with their audience directly. The Residency grew into an annual exhibition series Enter Through the Headset, the fifth anniversary of which was celebrated in 2020 by an exhibition and the launch of a permanent display of the VR Library. Showcasing previous GAZELL.iO residents, visitors can book here to come and experience the growing selection of VR works at 39 Dover Street. GAZELL.iO aims to bring digital art pioneers and a new generation of artists to a broader audience through its dynamic exhibition and educational program.