Between opaqueness and transparency

Arshake is pleased to publish, with permission of its authors, the critical text that accompanies Zone di Contatto /Contact Zones at AOC58 by Silvia Bordini and Diletta Borromeo,  curators of the project, that proposes the work of artists selected from different generations that narrate, interpret, document, describe and catch other artists in the act.

Between opaqueness and transparency, like in a game of references, a dozen artists narrate, interpret, document, describe and catch other artists in the act. Using film or more often video, these artists hold the camera as if they were engaged in a reportage, a game, an experiment, an investigation. In terms of training, age, experience and intentions they are completely different but all linked by a network of relationships that subtly reference each other. The portrayal of the other echoes a series of coincidences, highlighting differences, specificities and language. It is a method of extending the gaze which belongs to the paradigm underpinning the development of images, which has always been peculiar to making art. This is even more the case when the complexity of “technical” reproduction devices – photography, film, electronics and digital technology – is considered, as it is analysed and repeated, from Walter Benjamin to Nicolas Bourriaud. Art has always looked at art, ranging from appropriation, reproduction, quotation, contamination, homage, remediation to post-production. The focus is precisely on the relationship, a process in which the artist represents himself as another artist’s spectator, invents himself as a someone who continues the process, making the other artist into an audience. A contact zone. 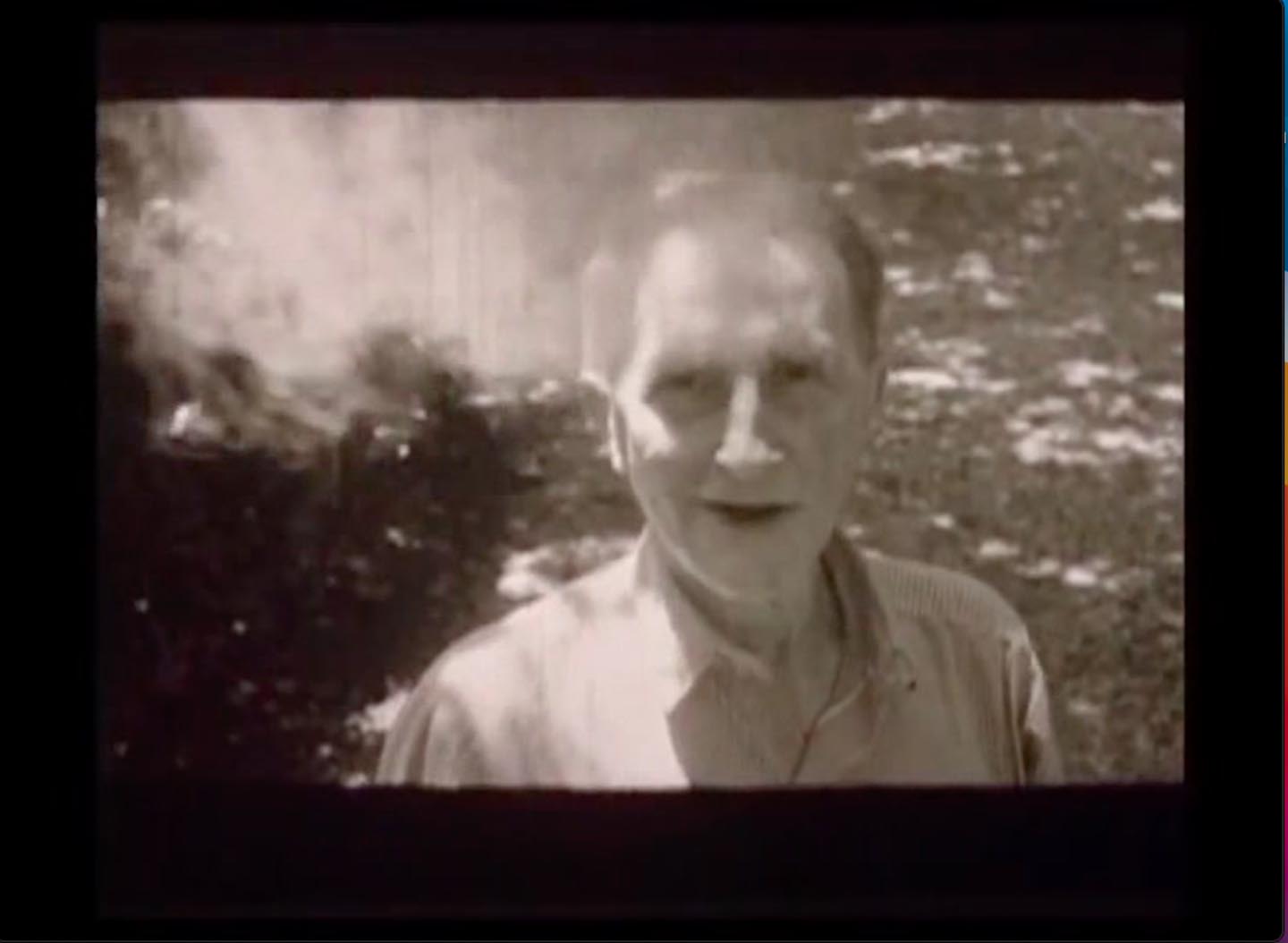 Verifica Incerta, realised by Gianfranco Baruchello and Alberto Grifi in 1964-65, is an experiment dedicated to Marcel Duchamp. A considerable amount of film from 1950s Hollywood movies is put to the test by months of dismemberment and editing cuts, with jumps and repetitions, until all sense is lost. Baruchello’s only shots are of the iconic figure of his friend Duchamp enveloped in cigar smoke, emerging between one cut and the next, as if to remind us that the root of this work is the ready-made. A light-hearted experiment, such as Giosetta Fioroni’s Gioco, starring Pino Pascali portrayed with friends in a sort of spring ritual “en travesti”, does not prevent the authors themselves from being aware of the medium and distinguishing between languages. “I don’t make a film because one of my paintings represented this particular set of objects and then put the objects in the film, it doesn’t make sense. The two things must be complementary, they cannot overlap”, Baruchello said in 1968. Some experiences produce a reverberation. Fioroni’s investigation into the intimate moments between his friend Umberto Bignardi and his wife in the video Coppie (Couples), where the search for beauty is mixed with a hint of voyeurism, may be a source of inspiration for the performance La spia ottica (The Optical Spy), designed for the Teatro delle Mostre in 1968. Writing about it, the artist said: “There are two moments that merge into one. The experience of the beholder and the behaviour of the woman who knows she is being watched.” 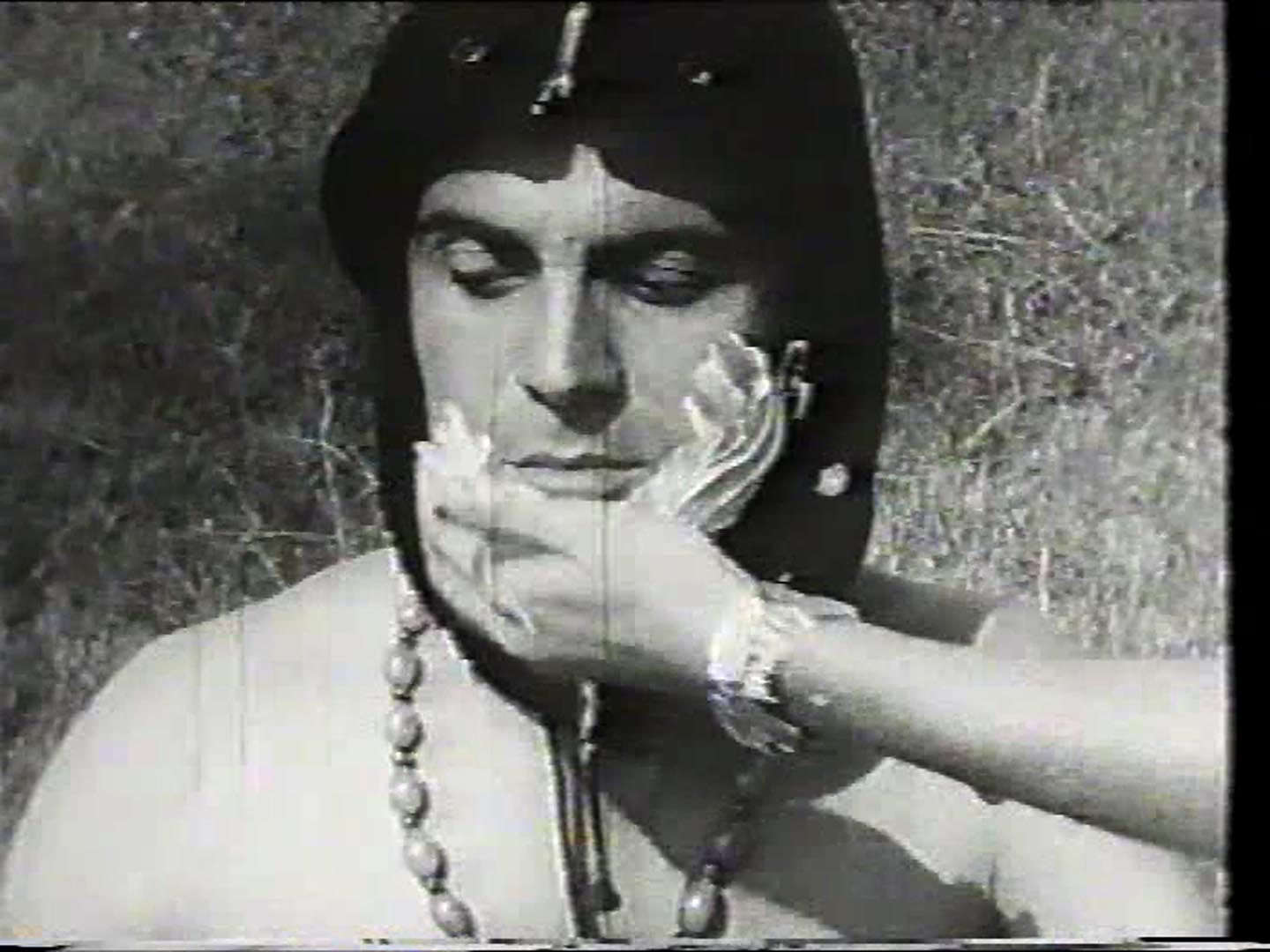 The behavioural element is extremely relevant in Luca Maria Patella’s video SKMP2, where Pascali is one of the protagonists. His presence and the “primordial” physicality he represents pierce the screen of Patella’s camera, but later, in 2003, when TV author Marco Giusti made a special programme on Pascali, a creative vertigo was created by the reworking of the SKMP2 clips together with other works, sets, animations and Pulcinella. Pascali’s transformations, Patella’s analytical eye and Giusti’s narration are superimposed. Giusti proceeds with jumps, cuts and repetitions that – contrary to the destruction of meaning used in the editing of Verifica Incerta – generate a rhythm and circular sense that close the story. If for some people experiences with the camera turn out to be transitory, Mario Schifano, on the other hand, remains, one might say, obsessed with the video, which he cannot do without, either as director of the instrument or as user of the TV monitor, which he films in his own videos. 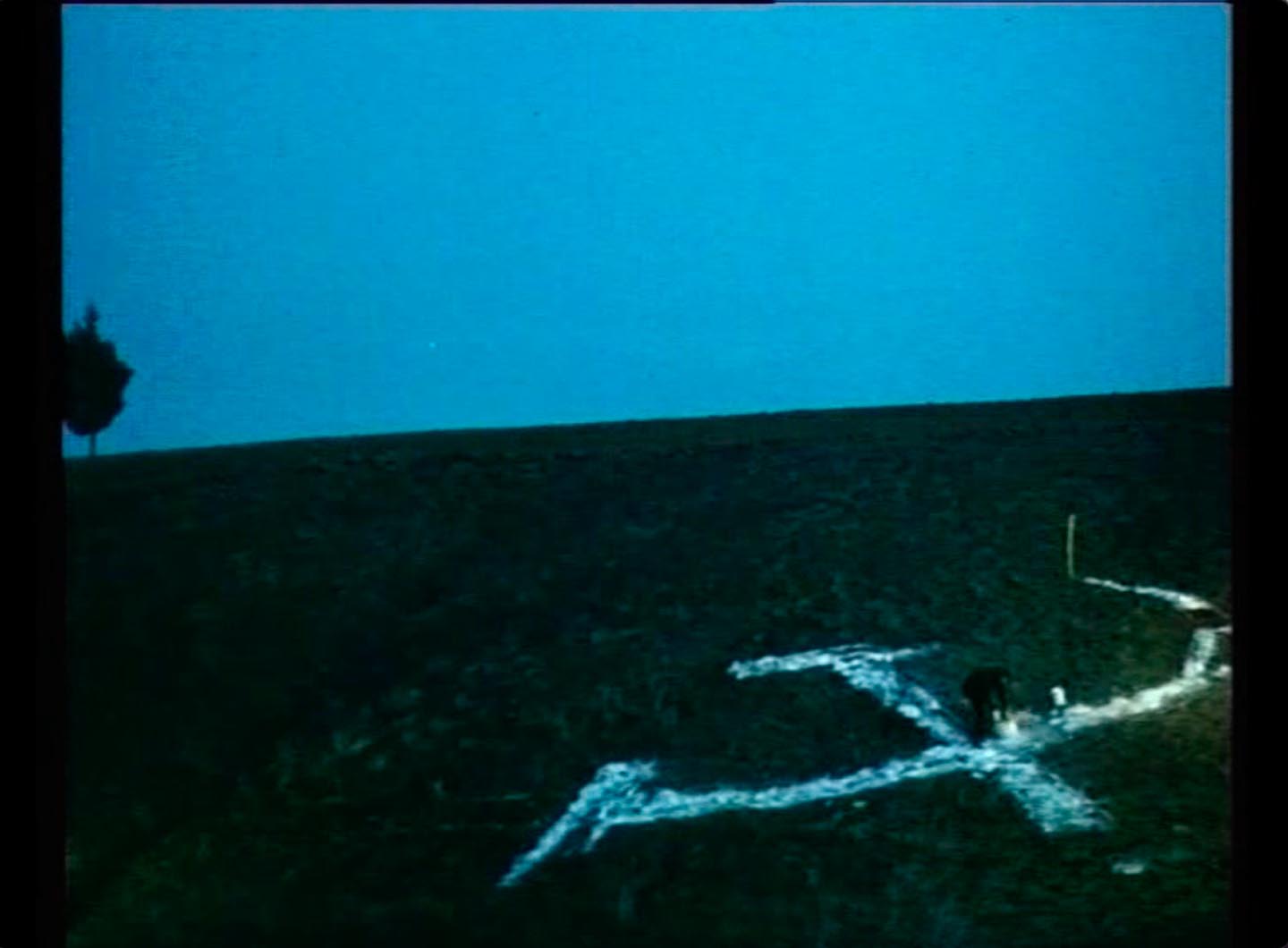 His vision is a continuous, daily flow of life images, partly collected in the film Mario Schifano Tutto, which reveals his human side, often excessive but honest at the same time, even towards his fellow travellers and their work, which he shares. In the piece by Mario filming Franco Angeli, while the latter draws a hammer and sickle on a lawn, Schifano appears to leave space for the sacredness of the work in progress. The videos by Fioroni, Patella and Schifano confirm a collective feeling, the need for artists to film each other, attracted not only by the new medium that allows for documentation, but also by the narcissistic desire, amplified by the camera and the game of equilibrium between the artist who produces the image and the artist who can become matter and mirror for the other. 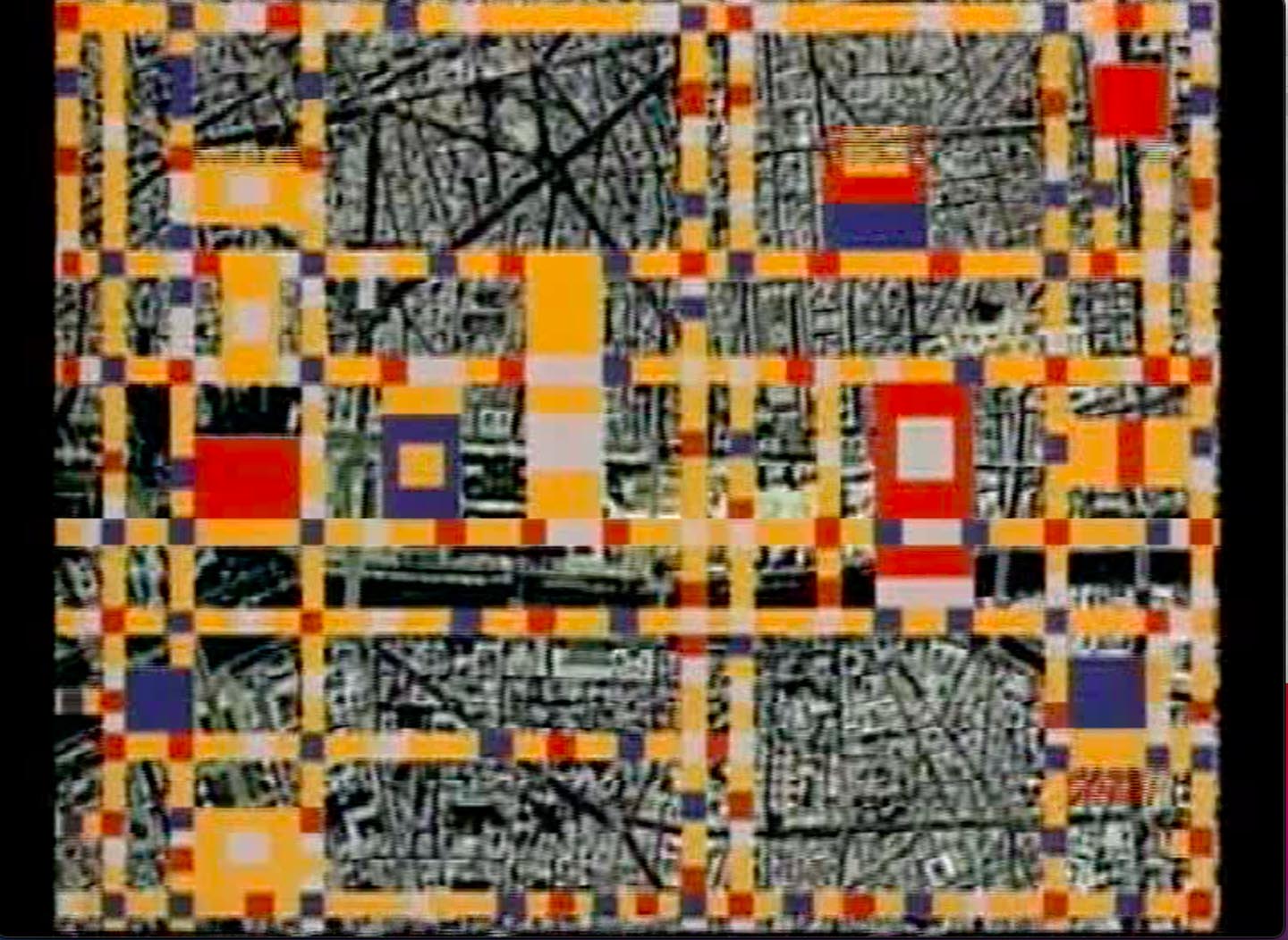 Looking and looking at oneself, the themes of the portrait and the mirror, the echo of the image, also involve the artist through the works of others, quoted, manipulated or merged in a new work such as Foot Print, made by Mario Sasso in 1989 with music by Nicola Sani and created for the first Rai-Sat broadcasts in 1990. The videotape shows images of cities and regions reached by satellite footage, in a new perspective that imagines the existence of harmony between the shape of the territories and those of the artists who have inhabited them. Dealing with connected fields, between video art and painting, Sasso felt the urge to “warm up” the palette of electronics, a language that had been considered cold until that moment. “I am a painter who, at some point, met electronics”, he says. Thus, from the grids of the satellite image, the works of Lucio Fontana, Piet Mondrian, Giuseppe Capogrossi, Alberto Burri, Marc Chagall and Osvaldo Licini emerge as “incarnations” of the territory they belong to. Form and colour sensitivity are transformed into expressive material by the artists, which are then overlaid by Sasso’s stratification. 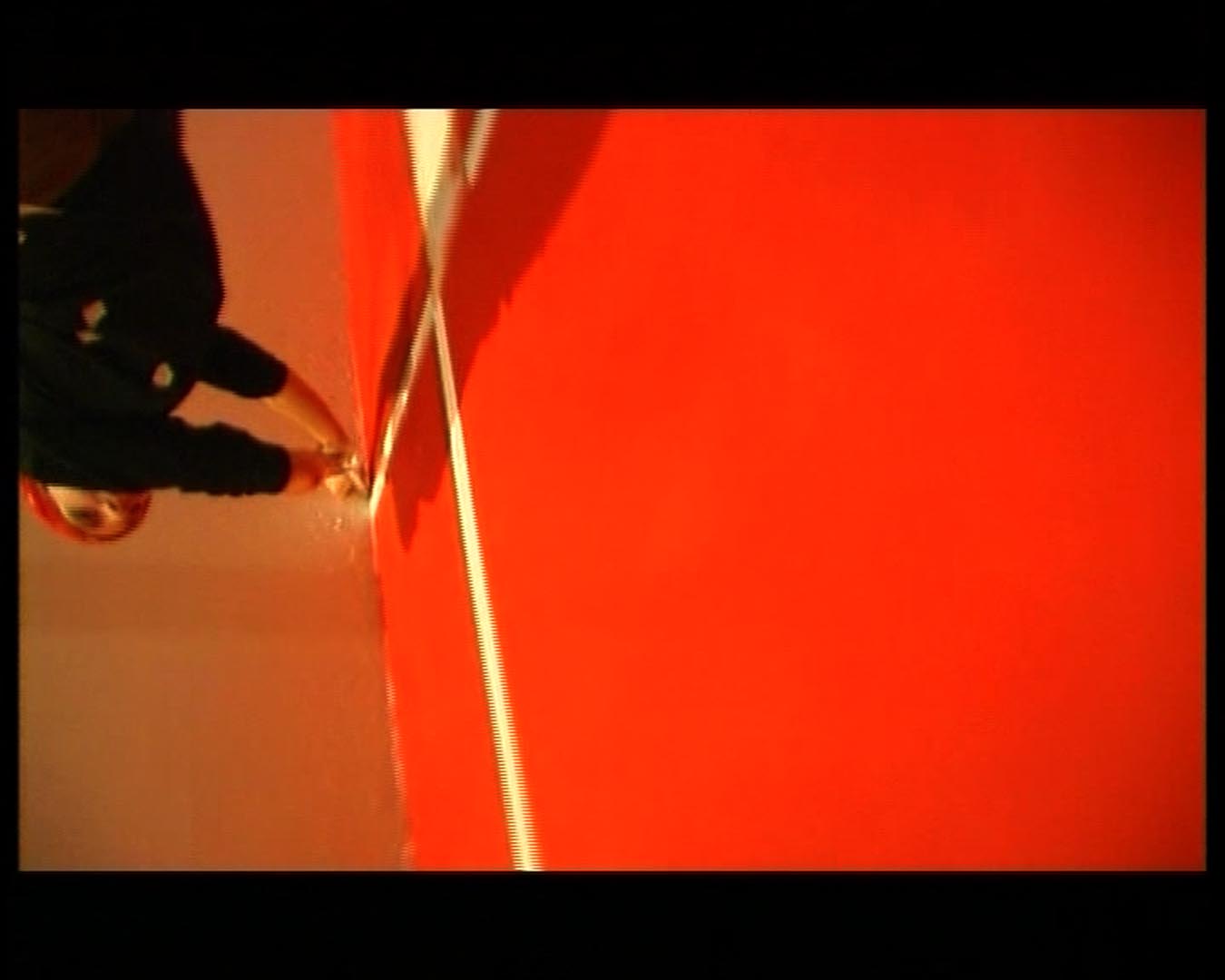 Mariagrazia Pontorno, a collaborator of Sasso’s at the beginning of her training, performs Passa Dentro, a collective work by David Tremlett. The occasion, in 2000, was a collaboration project between Palazzo delle Esposizioni and La Sapienza University, where the students were involved in a large work to be created in the spaces of Tor Bella Monaca. The video itself, made by Pontorno together with Federico Vuerich and Luca Morazzano, with music by Sani, was the result of a joint collaboration. Once again, the overlapping of several visions and experiences generates a creative short-circuit through the video maker’s gaze. She focuses on Tremlett’s interaction with the students, marks the time of the work’s progress, presents the portrait of the work and the artist as a whole, and leaves traces of her own memory by choosing to follow the sinuosity of the lines that signal the movement of the pictorial composition, lines that seem to move fast and softly in the video. 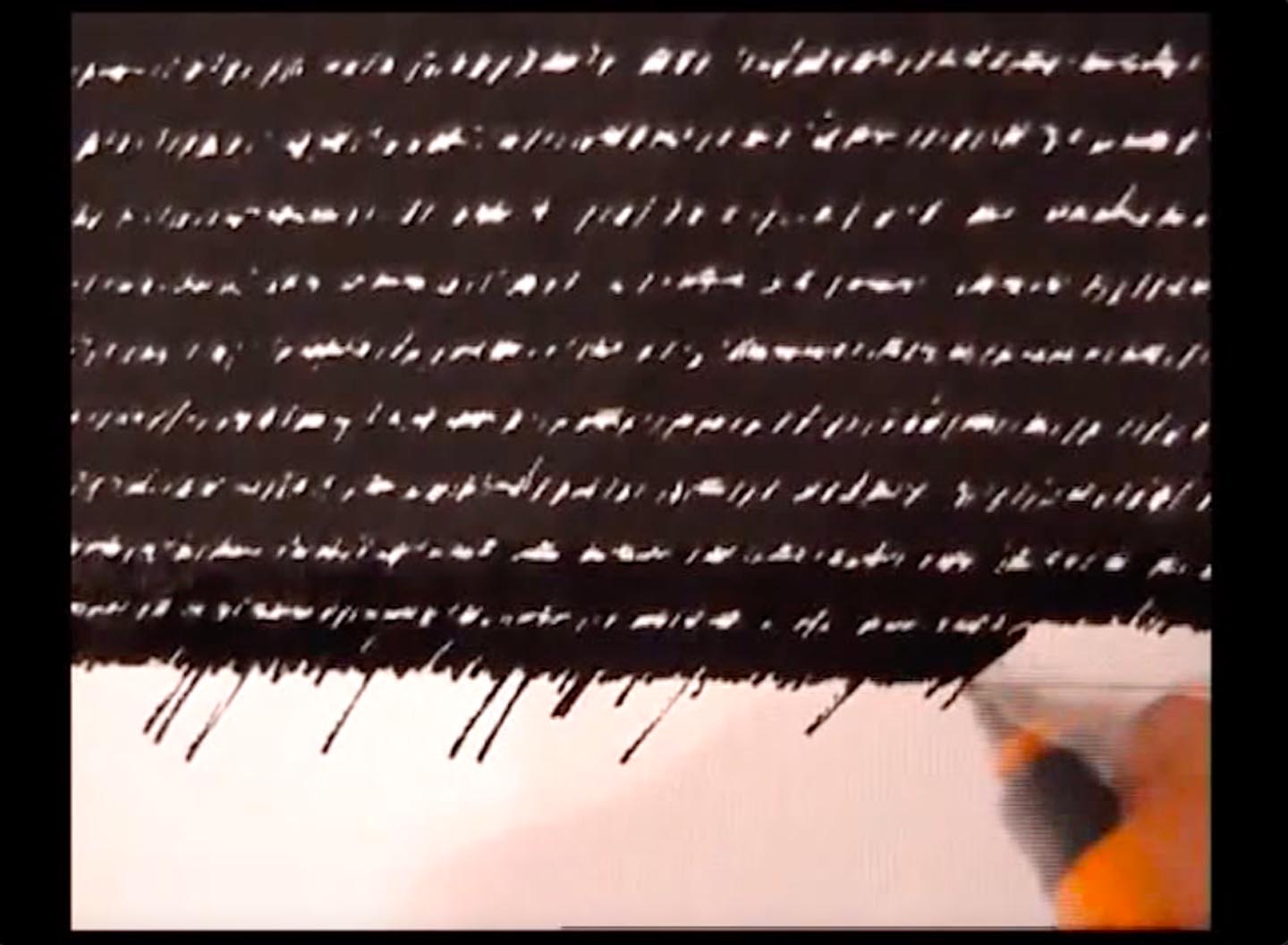 Francesco Vaccaro submits portraits of artists and writers to the lens of time and memory. In the small effigies of twentieth-century writers and in the videos in which he ‘chases’ the work of artists, memory appears to emerge through physical features, the body and its movement. Vaccaro describes the phases of his creative process: “After the meeting and emergence of an interest in the work, there follows the very beautiful phase of filming in the artist’s studio, where everyone works on their own and I watch in strict silence as the work is created. Then, the editing phase, in my studio, in which through the collected images, I try to build a poetic story.”

Using empathy Vaccaro seeks reciprocity in an internal correlation. When filming, he is meticulous, following the artists very closely, observing their craftsmanship, details and gestures, focusing on the work itself and particular objects. He does not seem to carry out a true mirroring, but rather seems to extract small clues from these works that then nourish the artist himself. In this way Vaccaro manages to capture the most sensitive aspects of the works: the manipulation of the changing inks and the material essence of paper in Elisa Montessori (2003); the erasure of imprisoned and further negated words in favour of a more intimate, less blatant, if possible even more minimalist dimension in claudioadami notes (2005); and, finally, Bruno Lisi’s Corpi Estranei (Foreign Bodies) (2009), which seem to be generated by organic cells and the vitality that runs through the whole work, from the filaments of the methacrylates to the paintings of threadlike vibrant colours.

The “non finito” between Michelangelo and Quayola