Double Screen at the MAXXI Museum 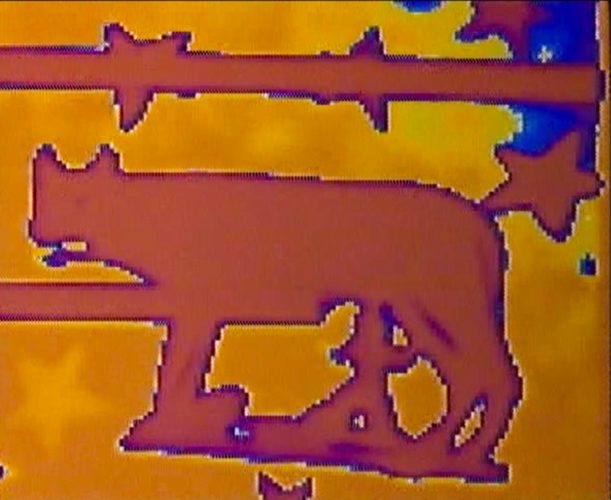 The Doppio Schermo programme at the MAXXI Museum, an exhibition curated by Bruno Di Marino that has screened “film e video d’artista italiani dagli anni Sessanta ai nostri giorni” (Art film and video in Italy from the 60s to the present day), which began on 9 September, is now coming to an end. The complexity of this exhibition, both in the variety and quantity of the exhibits shown (approximately one hundred works made over the course of almost sixty years), stimulates a series of reflections based, first of all, on a declared educational objective: even though this exhibition contains a necessarily incomplete selection of works, its purpose was to trace the progress made by Italian cinema and art videos from their earliest days to the present. It was also designed not only to highlight the historical context, but also to analyse current production, since this is a natural objective of a museum dedicated to the arts of the 21st century. Doppio Schermo is the third part of the project Artapes, launched by the MAXXI Museum last May and curated by Giulia Ferracci. The name pays homage to Art/Tapes/22, one of most avant-garde film production centres in Italy during the 70s. With this project the museum inaugurated the brand new Video Gallery, developed with the collaboration of the production house ‘In Between Art Film’ and conceived as a space entirely dedicated to video screenings. Using the black box formula, this “gallery” is conceived along the lines of the cinematographic model to give viewers the opportunity to stop and watch moving images without any visual or sound interference. 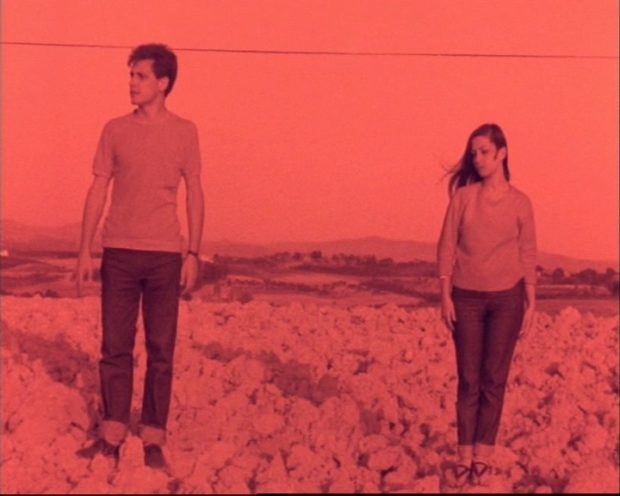 This physical isolation offers optimal viewing conditions, but also promotes conceptual isolation: the video is no longer exhibited across the museum rooms, but is now situated on a different trajectory that takes the specific features of this medium into account. Obviously, these considerations do not apply to the video installations since, even given all the possible technological difficulties, their arrangement in space is not in doubt. The single-channel video, on the other hand, especially at a time when it pervades the internet, is multi-nuanced and , therefore, its correct location within the museum rooms is doubtful. 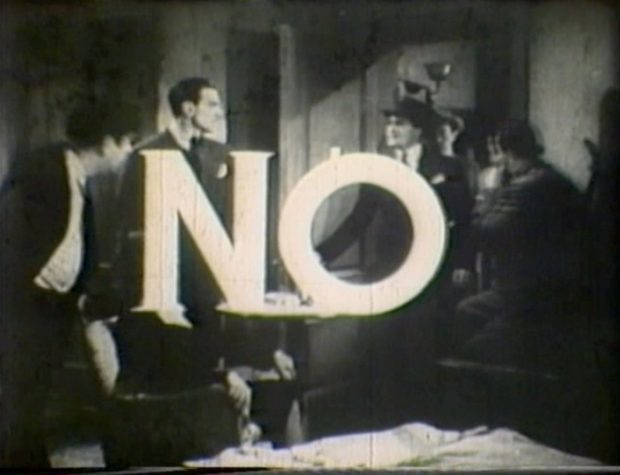 In this exhibition by Bruno Di Marino, the screen dominates the room and becomes a visual paradigm characterised by an inherent duality. It is both a «surface for screening but also a filter»[1]: as well as revealing the image, it can also function as a veil or a screen used as a mediation tool. The title Doppio Schermo also hints at a hybrid process, the reciprocal exchange and blurred boundaries between different types of images and, more precisely, between cinema and video. 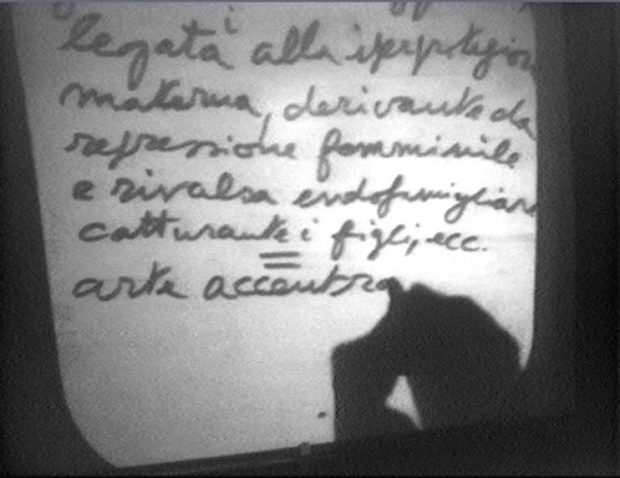 The two different technologies, one originating from photography and the other more electronic in nature, have long divided the production of moving images into two distinct branches, later being reunited by the advent of digital technology, which has not only eliminated film, but also magnetic tape. This and other micro-stories could have been designed to form the thick plot woven by this exhibition, with its four four-hour programmes gradually adding detail to a story that is far too complex to be narrated in a linear way. The starting point is the experimental cinema of the 60s (among others, Gianfranco Baruchello, Alberto Grifi, Mario Schifano, Luca Patella), followed, in the next decade, by a comparison between the film production of Franco Vaccari and Ugo Nespolo, and the first videotapes by Michele Sambin, Vincenzo Agnetti and Giuseppe Chiari. 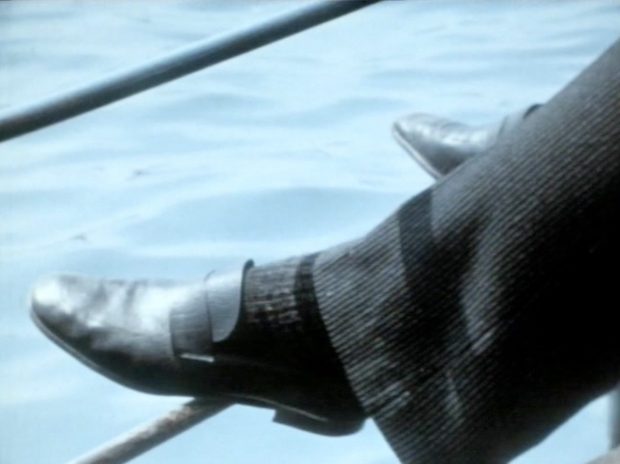 The third programme brings together the 80s and 90s, highlighting the variety of language, from the film experiments by Paolo Gioli to the use of computers for animation and computer-generated images. The last chapter, centred on the new millennium, obviously has to include, besides the conscious use of film by artists such as Rosa Barba and Leonardo Carrano, the spread of digital HD, which allows the electronic image to cross boundaries, once again, and meet cinema, especially when the video has a story to tell. The extra projection of works of longer duration and the series of talks Le storie del cinema d’artista (Stories from art cinema) can also be viewed alongside the scheduled programmes.

In the single programmes this apparent linearity, which sees cinema and video history divided into decades, was intentionally contrasted with themes, aestheticism and technologies, leaving the uninterrupted development of video to speak for itself. Such encounters – between animated drawings that follow cinematographic techniques and computer-generated graphics, between the ostentatious physical materiality film and the transparency of high-definition, between glitch aesthetics and the sophistication of more recent works – provide the most interesting points of reflection. 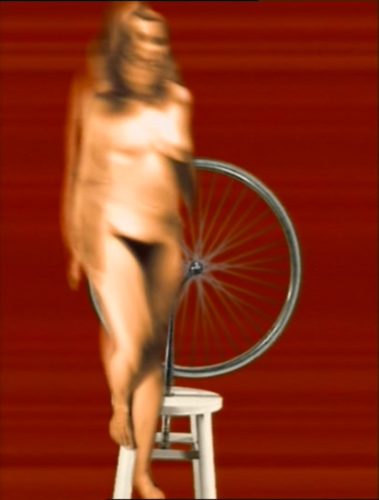 Like a book allowing fragments of a story to meet and collide, the big screen has been elevated as the privileged medium with which to read sixty years of film history and art video. The double screen of the MAXXI Museum condenses both large and small screens that, over these decades, have visualised very diverse moving images. It is known, for example, that before the arrival of high-definition, video was confined to the “small screen”, that of television, and some of the works in this exhibition, such as soundtracks and advertising, were originally intended for this medium. On the other hand, the last chapter of this story, from 2000 to the present, shows how digital technology has resulted in the absolute instability of images that, in the complete immateriality of their substance, can be visualised both in the few centimetres of a smartphone and on large screens. 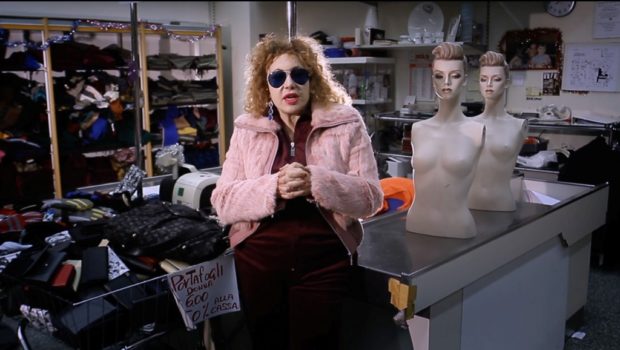 To devote a cinematographic-like space inside a museum to an exhibition that looks at the entire history of videos and films by Italian artists is an invitation to question the current pervasiveness of video and what the best exhibition solutions might be, even though a definitive answer to these questions cannot be given.

On December 14, appointment with the last lesson of the cicle The Histories of Cinema, realized within the project Double Screen: