Complexity: a human at the mercy of an algorithm

For Digitalive19, Enrica Beccalli and Roula Gholmieh staged Complexity, a performance that overturns traditional human-machine interaction. In 2019, this piece won the first edition of “Re:humanism”, an award dedicated to the relationship between art and artificial intelligence promoted by Alan Advantage. 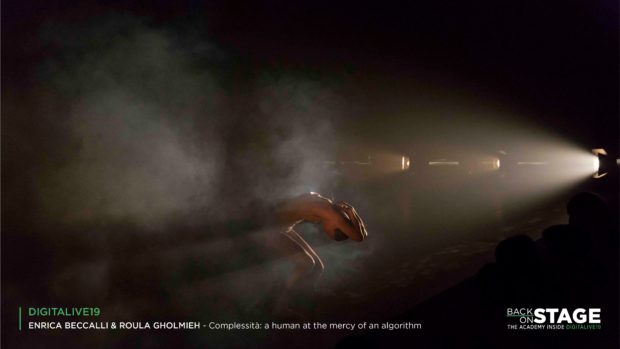 Overcoming the boundaries between art, technology, science and engineering, Complexity immerses visitors in a world where technological devices direct movement. The performer’s dance follows the flow of images projected on a screen positioned behind her, where an infinite multitude of corpuscles accompany her movements. 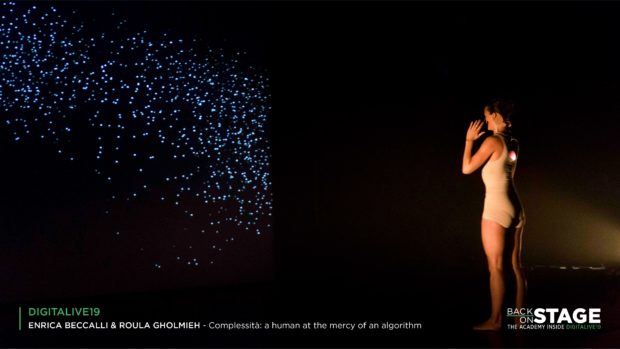 It consists of data on flock migration transmitted in real time, the same data that controls the performer’s dance routine, who receives impulses through a GVS (Galvanic Vestibular Simulator). GVS is the technical name for a system that operates like the ear’s vestibular system, a biological process which controls balance in human beings. Looking at the GVS again, it is through this process that the impulses transpose the virtual (data mapping on bird migration) into the biological, changing the perception of the performer and her orientation in space. Her vestibular apparatus is literally hacked and the positions of her body in space are hijacked by the machine that controls them. The performer’s movements are in perfect harmony with the images produced by the algorithm. The concept of anthropocentrism is turned on its head, resulting in a performance with profound visual and emotional impact. The two artists thus offer a reflection on man’s position in relation to the complexity of everything and on how technology is now an integral part of this process. 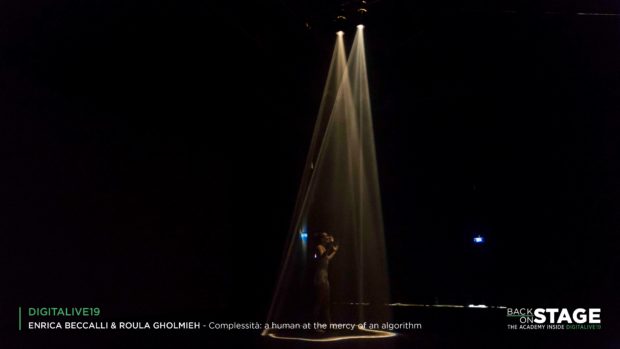 Enrica Beccalli is an interaction designer and researcher with the Fulbright Program. Fascinated by the interaction between human beings and new technologies, between individuals and communities, Forniti’s projects focus on complexity, emotions and behaviour. Her teaching career began at ISIA Roma Design and continued at Parsons, where she taught the course on Design of the Everyday Technology. Alongside her academic career, Forniti has worked for several research laboratories in the field of design, and for the ESPN+NYC Media Lab. Awarded an American visa for “Extraordinary Abilities in the Arts”, she has been working for three years as an Interaction Design Lead for a technology company specialising in online identity verification, computer vision and automated learning. She recently joined the Johnson&Johnson Design studio.

Roula Gholmieh is a Lebanese digital artist, designer and architect living in Brooklyn. Her work explores the relationship between art and technology, ranging from installations for physical spaces to interactive objects and digital experiences. Gholmieh focuses on the playful and unexpected, trying to break the boundaries of traditional narratives by merging the physical and digital. She holds an MFA in Design and Technology from Parsons, New York, and a BA in Architecture from the American University of Beirut.