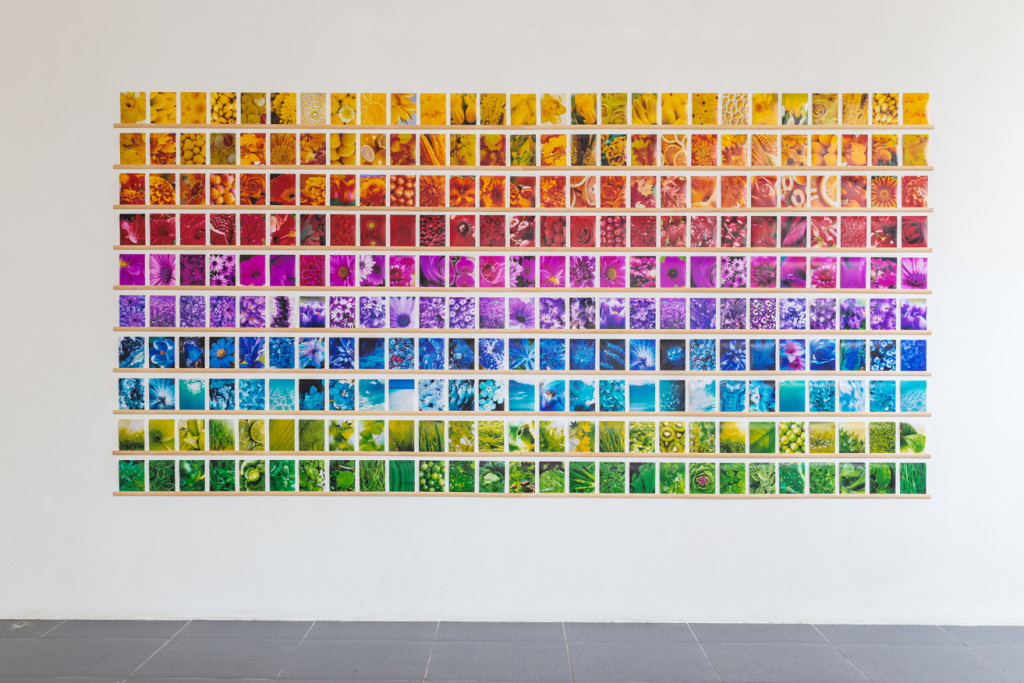 Enzo Calibè (b. Naples, 1980) has been taking on environmental issues related to landscape modification for years. This brand of transformation is tangible and conceptual. It promotes and sustains Eco-Capitalism. This Neapolitan artist’s exploration is founded upon his judicious socio-political reflection centred upon a phantasmal sustainable development (in other words, an oxymoron!), an economic manoeuvre that defiles our planet’s natural balance instead of safeguarding it. It seems perfectly clear that “the very same linguistic and communication paraphernalia used over the past few decades by the ecology movement in an attempt to confront the destructive potential of unsustainable development has now been completely incorporated by the gurus of marketing ” to advance an equally impossible green economy. Calibè’s aesthetic quest delves into the natural stereotypes introduced by advertising campaigns where nature is replaced by its media representation. 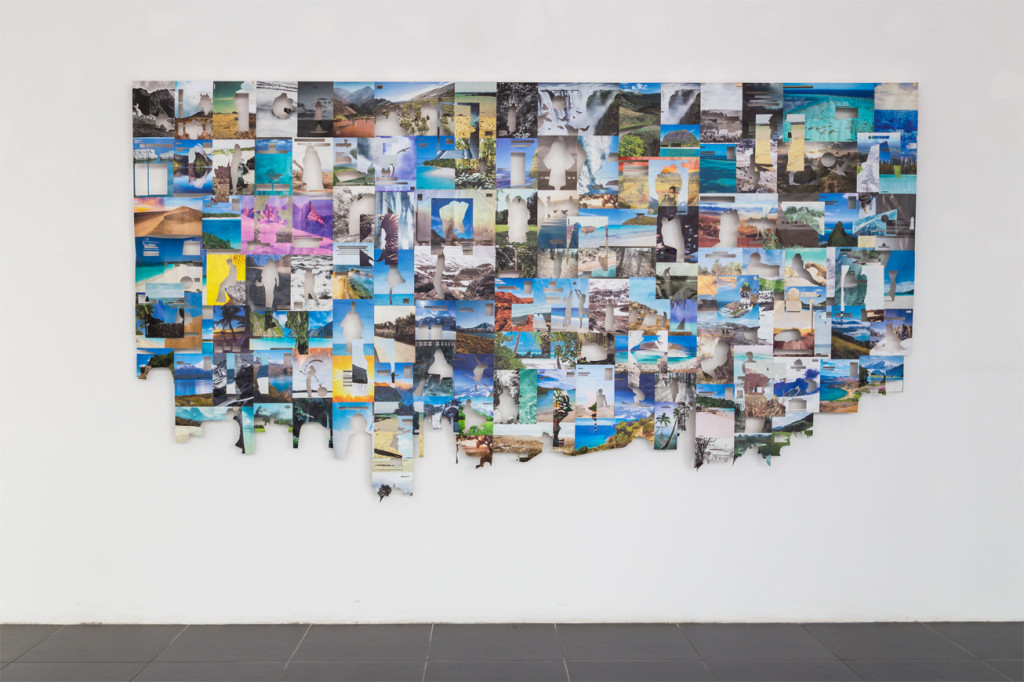 The exhibition is presented as an intense counterargument on sustainable development and safeguarding nature, shifting from its intrinsic recursive essence to accentuate the tautological aspect of the very idea of a contemporary perspective – an ultimately dematerialized place that has adopted utterly conceptual connotations.

To paraphrase Gilles Clément, Enzo Calibè’s work could be defined as a manifesto of the fourth landscape since it deals with a place that is just as interstitial: the leavings between tangible nature and immaterial nature, a virtual environment that people can take part in without actively participating – where you can contemplate the perfection of a flower without smelling its fragrance. The natural scenario we have to use for comparison is actually the one portrayed in advertising where the places shown are fascinating and perfect. They are like a “heaven on earth” where we can immerse ourselves in a carefree manner – visions like the ones combined in the captivating video-installation that opens the exhibit and guides the visitor towards a reflection upon our gradual detachment from the natural environment.

Adopting the language used in marketing, Calibè has created mimetic installations where the “debranning” procedure used on the images is not immediate. However, the landscape has been calibrated from the background to the forefront. In his large wall installation entitled Ecobusiness landscape (2016), numerous glossy photographs become minimal elements in a narration of a landscape completely deprived of human presence. It is a work in which the alternation of filled and empty spaces forms large shadows or cumbersome absences that reshape the appearance of the landscape, much like our indifference to natural boundaries does. 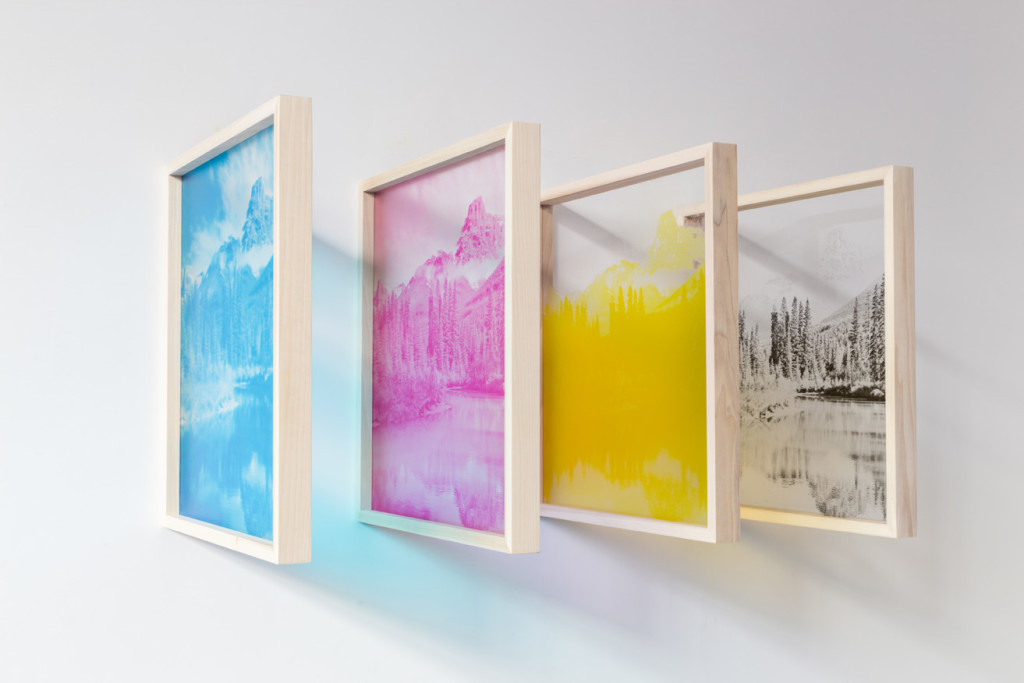 Technology has made it possible for us to have the distinct impression that there are no environmental boundaries or that these can be easily avoided. There are no boundaries of space or time and the landscape becomes “commonplace” – easily assimilated and (above all) modifiable. This indefinite area has none of the main characteristics of the place, those Marc Augè calls “non-places” as having no identity, relationships much less a history because they tend to not preserve their own roots. In that regard, digital photography has brought vast changes to the concept of memory and distribution and has contributed to the depersonalization of places. In fact, the equipment used to capture images filter and memorize them so rapidly that direct and uninterrupted contact with photographed objects is no longer possible. The result is the ability to absorb images that will never fully render the experience of the moment. In the series of Indian ink and watercolour sketches, A landscape is a landscape is a landscape… (2016), Calibè places cameras, smartphones and tablets in the forefront as the lenses through which we have the illusion of re-establishing proximity with an environment that actually moves towards the background in a most distinct way. The sketches created with the pointillism technique refer to the graphical representation found in old-fashioned illustrated encyclopaedias. An ever-present reminder of printed works is also found in the 2016 work entitled Scomposizione di un miraggio (Breakdown of a mirage) where the artist uses a process that is the reverse of the one used for industrial printed material in an attempt to deconstruct an image in order to make it more natural and evanescent – in striking contrast with the installation hanging on the opposite wall: Inventario della scomparsa (2016) (Inventory of the disappearance) with its unnatural bright colours, so typical of digital prints, that follow the gradients of the Pantone colour chart. 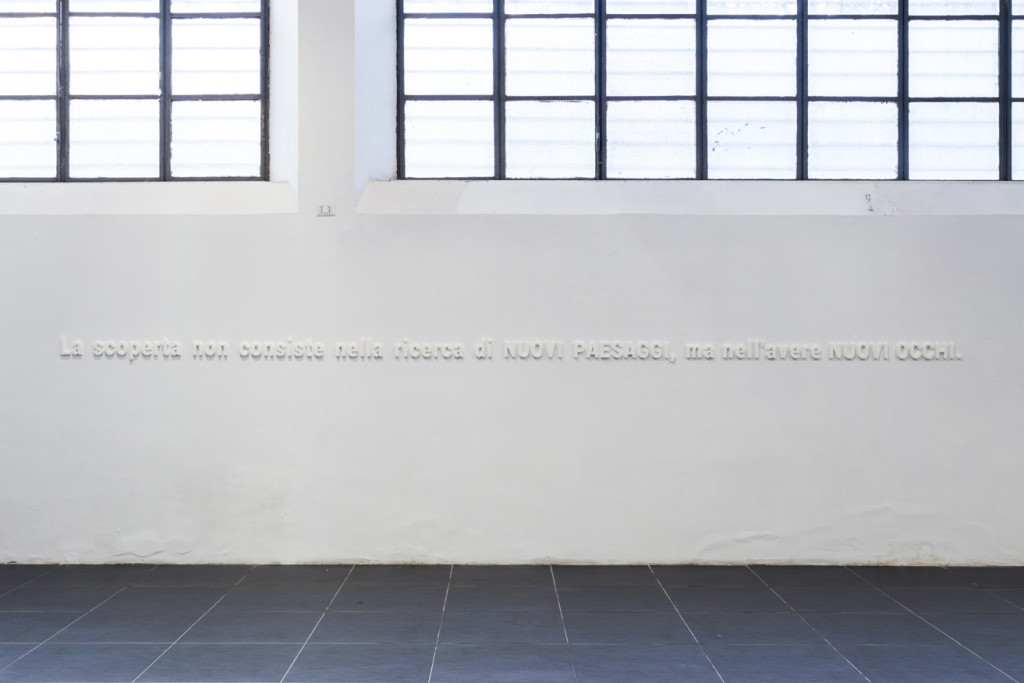 Lastly, Enzo Calibè chronicles how marketing strategies recover 19th century literature in order to contribute to the development of ecology as the service of the new capitalism by transforming a famous Marcel Proust quote (“The real voyage of discovery consists not in seeking new landscapes, but in having new eyes”.) into an advertising slogan that the artist allows to emerge – tone on tone – along the extended white wall encircling the exhibit; a visual and intellectual short circuit, a single enormous caption with which the concept of the “disappearance of the landscape” is put into effect that also serves as a plea to look beyond the representation of what is visible.