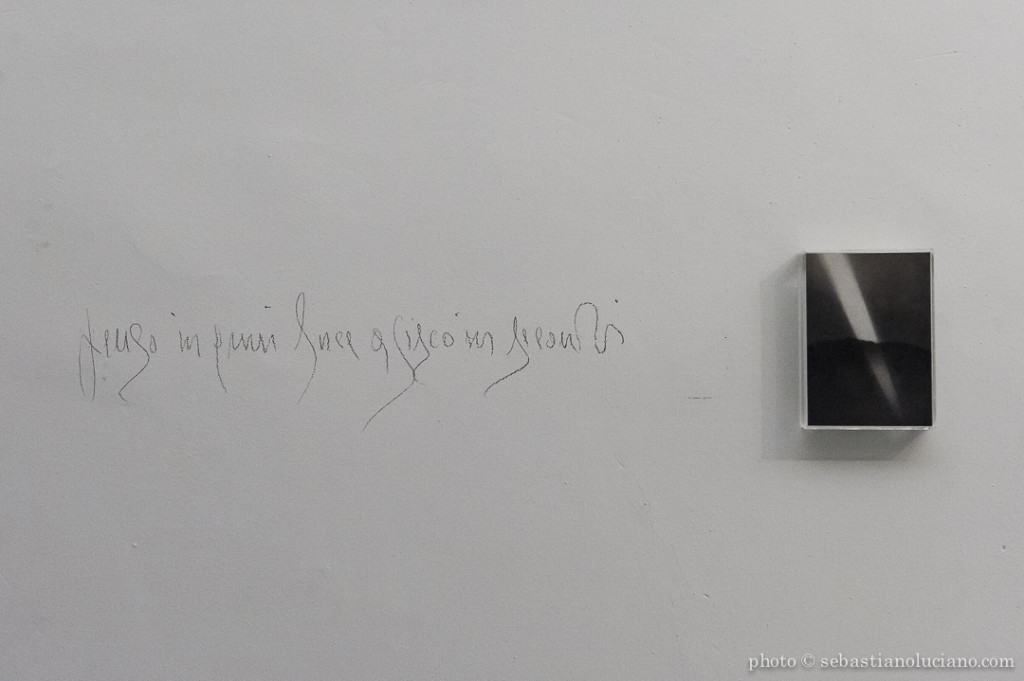 Fiorella Rizzo and Federica Di Carlo come together on the theme of light, materialised in Rome’s Beeart Gallery in the form of installations orchestrated by the two artists in synergy with each other and with space. This is the embodiment of an encounter between artists of different generations who some time ago met and established an instinctive dialogue, now transferred to a show invited by a third person. Throughout their individual works as well as their staging in a net of relations they have revealed the invisible energy of light, a way through which opens onto the spaces created by the multisensory perceptions of the viewer (and listener).

Fiorella Rizzo’s works welcome us at the entrance to the exhibition. In her Illuminazione, thousands of drawings of black and silver light bulbs on overlapping sheets of PVC are transformed into an ambient installation, barely brought out of two dimensions by the light bulbs suspended above the sheets, their cables snapped off, their function impoverished. The spotlights on the scene are therefore focused on the «light of creation», the only true illumination.

In K12 (2007-2015), the drawings of light bulbs appear on sheets of plastic crumpled in cases from which transparent tubes (similar to water pipes) emerge, holding electric cables; here we find a different inversion of functions, a further stimulus to reflection and awareness.

Fiorella Rizzo’s creative light leads to the works of Federica Di Carlo (1984) and to a place of trespass between worlds and dimensions, a terrain of action because the laws of physics make the light manifest in the charisma of its colors.

And so in Celeritas the gallery’s old entrance door is re-hung to become a threshold of light: quartzes and Icelandic crystals (the «sunstones» used by ancient Nordic travellers to find their way) are arranged in a line at its base to capture the eye, which is then drawn to a precise point on the wall, where a single sunstone is positioned to indicate the repeated inscription I See, with its dual meaning of seeing and understanding. 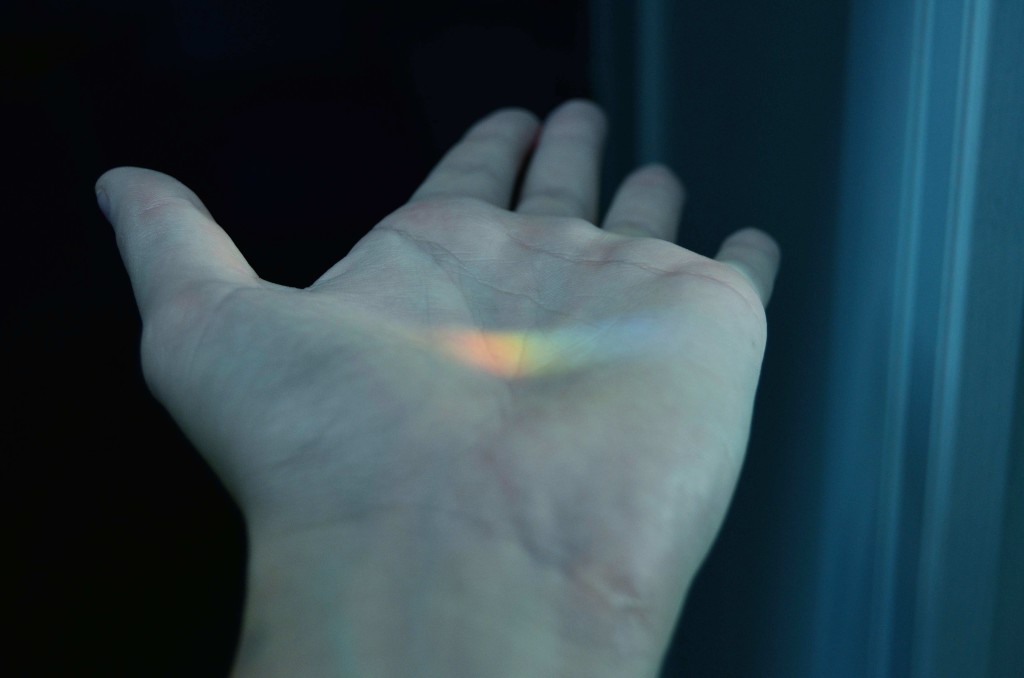 Fragments of rainbow projected onto hands are captured by Federica’s photographic lens in the series Hold Infinity , their invisible nature revealed and materialised alongside the desire to hold onto them and to all the energy of their vibrant colors. 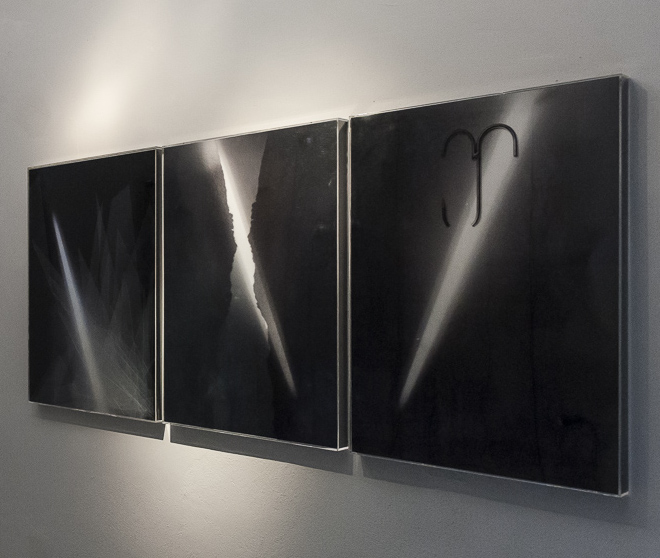 The research journeys of the two artists are presented in two contrasting videos, transmitted by two screens facing each other across the space: Federica di Carlo’s Through my mother’s eyes (2015) tackles loss of vision as an opportunity for a rise towards light, while in Fiorella Rizzo’s Video Nero (2004) the light of a metalworker’s welding torch becomes an autobiographical evocation of childhood creativity which can make a cinema screen out of light reflected on a wall.

The videos play alternately. Spotlights shine first on one then on the other; the soundtracks of the films work the same way. If the exhibition operates on an emotional level that addresses the sense of sight, the only one required for completion of the works, the sense of hearing also comes into play in the creative «transmission» of the two artists. From the depths of the gallery, where the videos await at the end of the exhibition, the soundtracks spread into the entrance area, greeting visitors and superimposing hints and emotions projected on the works by the sound. 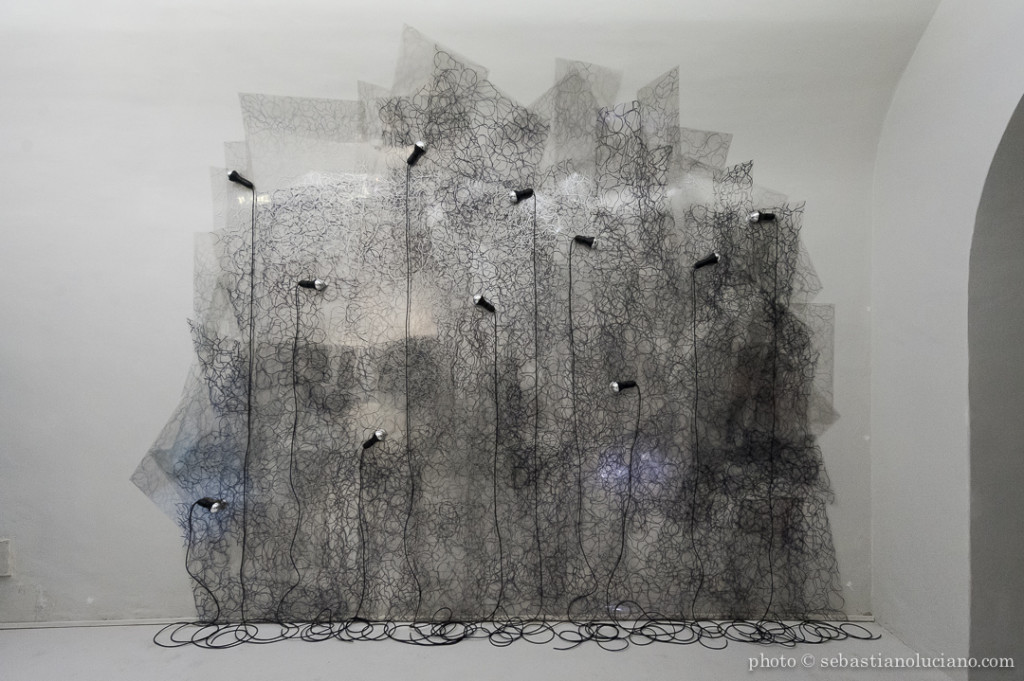 The electronic age – the expression of industrial progress which finds in electricity the origins of the modern digital age – is here called into question in terms of its impact on humankind’s creative powers. To call into question, often with negative associations, can mean acquiring awareness, exercising the human faculties, in particular the creativity which progress tends to weaken if not practised. Fiorella Rizzo kept the flame alive throughout a synergetic and synesthetic exchange, between them, with the space and with the public.

The Coming of New Media # 3