by Arshake
in DIGITALIVE18, focus, News

After illuminating the stage of the Romaeuropa Festival in 2016 with Ljos, fuse* returned to the festival with Dökk, an astral work that continues the collective’s research on interactive spaces and the manipulation of Big Data. Founded in 2007 by Mattia Carretti and Luca Camelli, fuse* is a collective of artists and researchers collaborating in a climate of ongoing experimentation which moves forward the aesthetic and conceptual experience of multimedia art. Over the last five years, the computer experience achieved by fuse* has merged with the corporeality of Vertical Dance, producing a fruitful collaboration with dancer and acrobat Elena Annovi. 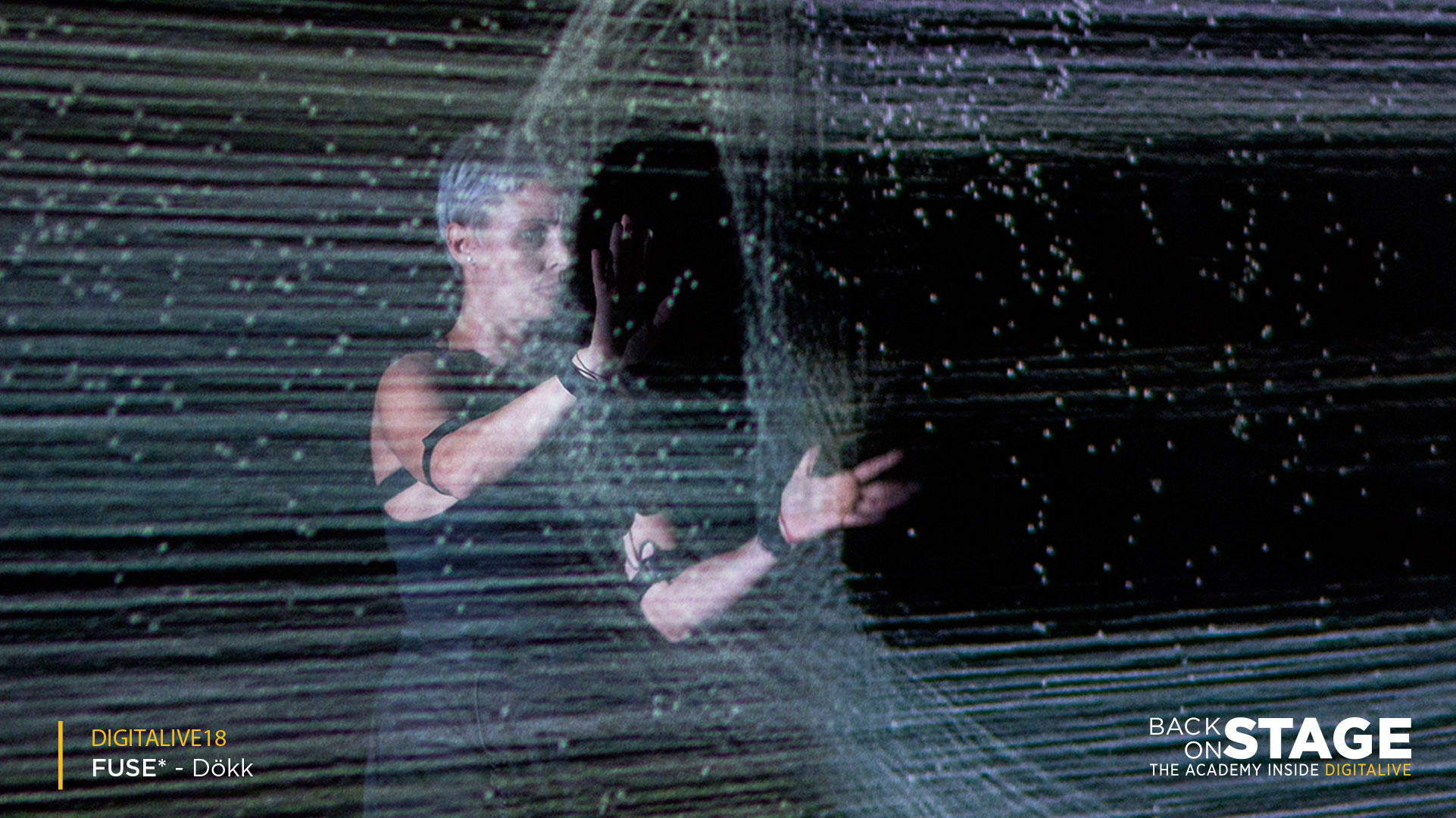 The live media performance Dökk replicates galactic phenomena, recreating the forms of the universe and alternating high and low rhythms marking “the show’s emotional dimension”. Dancer and choreographer Elena Annovi’s body is in dialogue with the digital landscape that surrounds the stage. The performance follows a cyclical narrative divided among 10 rooms – or chapters. The interaction between the physical laws of the universe and data processed in real time modulates each room. The colour of 3D particles, which constitute the visible universe, and several sound modulations change according to the emotional trends expressed on Twitter. 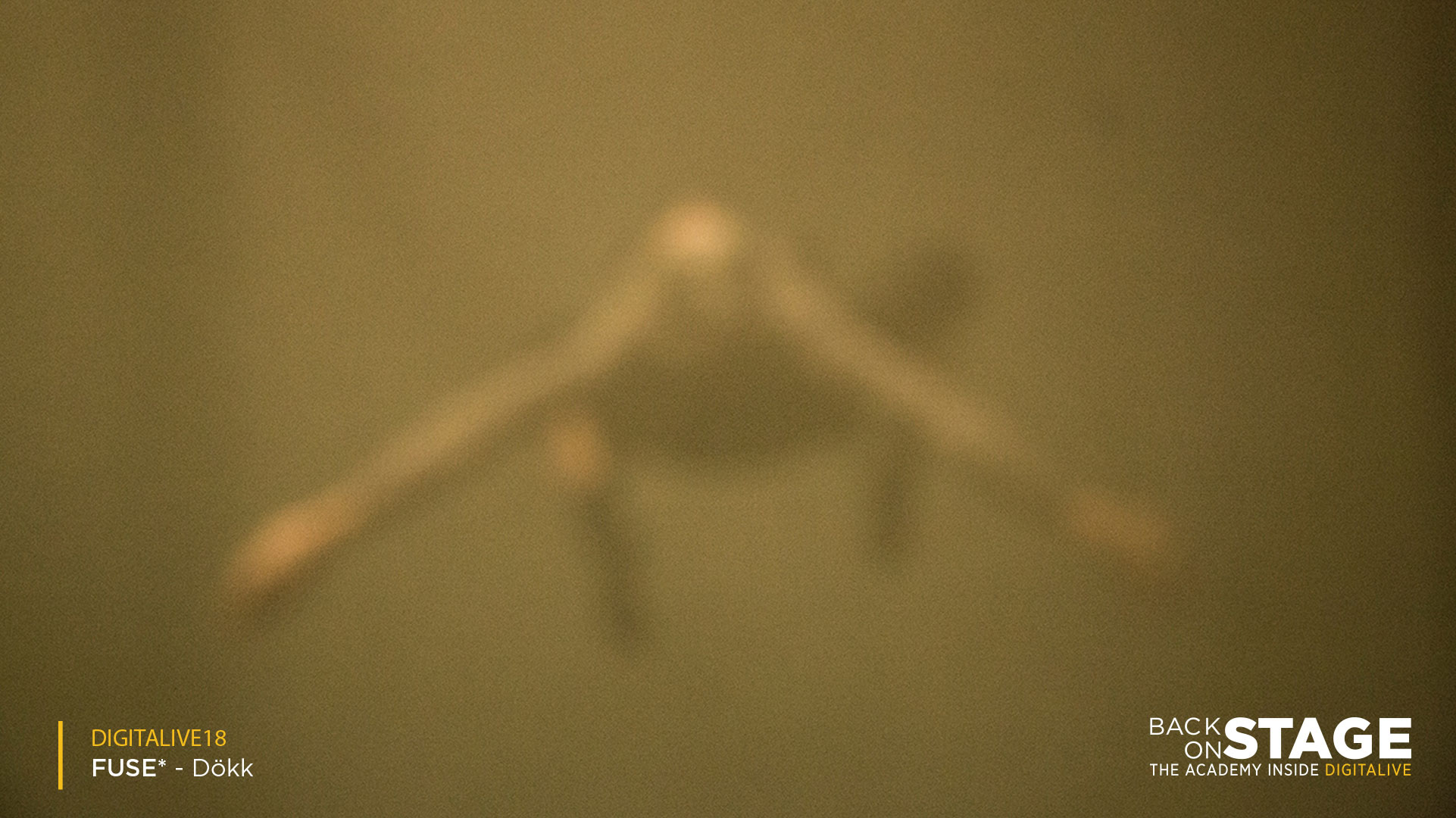 The lexicon of Twitter posts is filtered through a sentiment analysis algorithm that regulates the shades of red, each corresponding to the corporeal thermal intensity of the dominant emotional state on the social media network. Biometric data and motors processed by a complex network of biosensors and software feed the analysis of social data and the combination of videomapping, video and retroprojection. This software processes the dancer’s movement and heartbeat and “modifies the visual-sound space”. From start to end, a red light in the universe traces back to the dancer’s heartbeat, evoking the cycle of life. 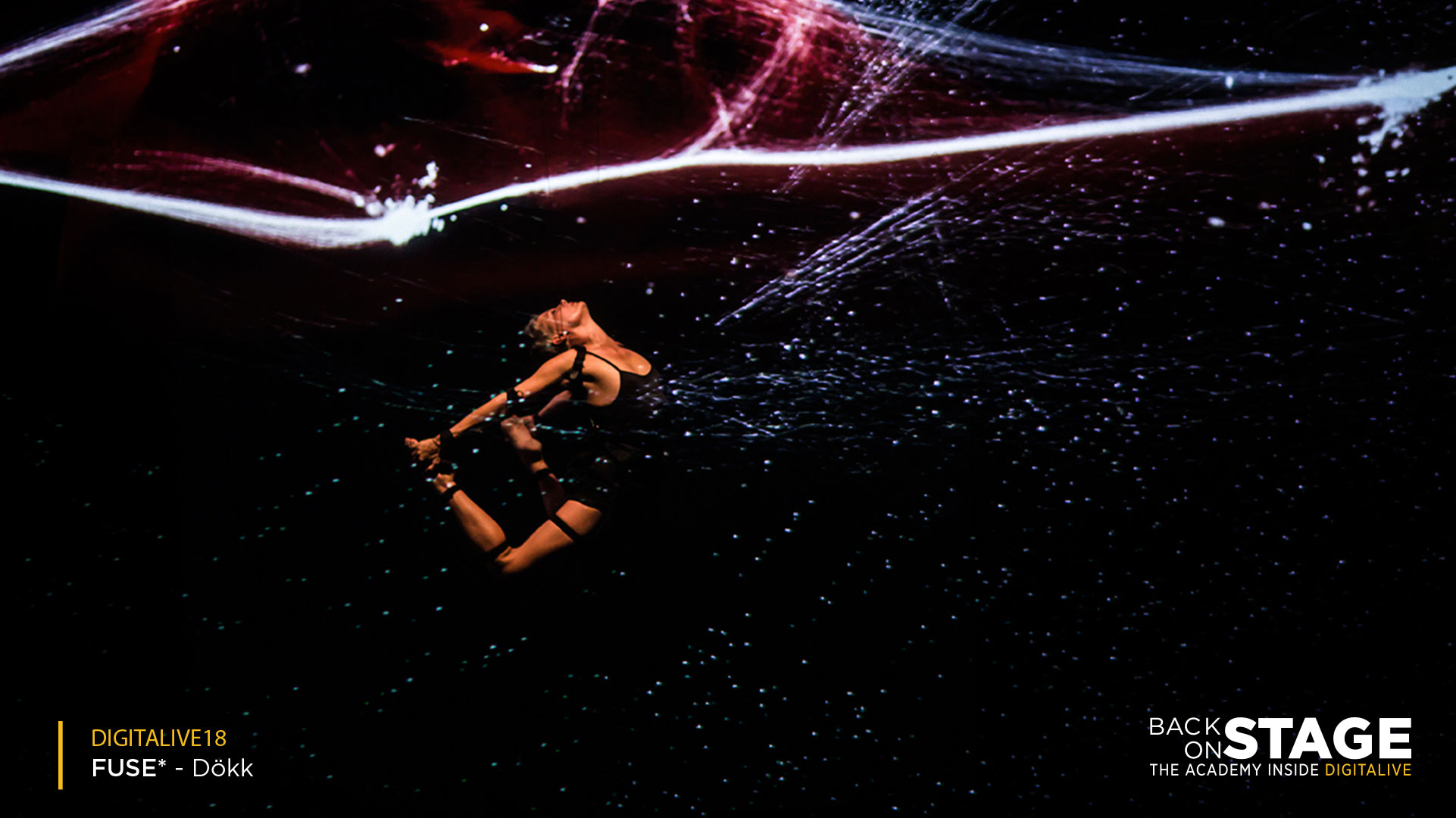 In a gripping audio-visual show, the fuse* collective recreates the subconscious process that transforms particles, atoms and electromagnetic fields of space in visual and sensorial perceptions of reality. The digitally constructed interconnection between performer and universe establishes an equilibrium between the world’s different elements. Following Ljos (light), Dökk (darkness) gives life to a multi-sensorial experience, joining different poles such as light and darkness, the weight of gravity and the lightness of flight. The fusion between the body’s movement and the flow of digital space reveals the relationship of harmony and complementarity with technology. This can “help understand where our human limitations can be moved in order to convey beauty and communicate in increasingly profound ways”.

While the performer discovers the universe, adapting to its forms, the digital space arranges itself in real time – connecting the microcosm of the Mattatoio to the macrocosm of online interactions. From 6 to 7 October, Dökk’s interstellar activity immersed the public in an altered time-space, both strengthened and unique – “so many sensors and inputs are analysed that the performance is never exactly the same”.