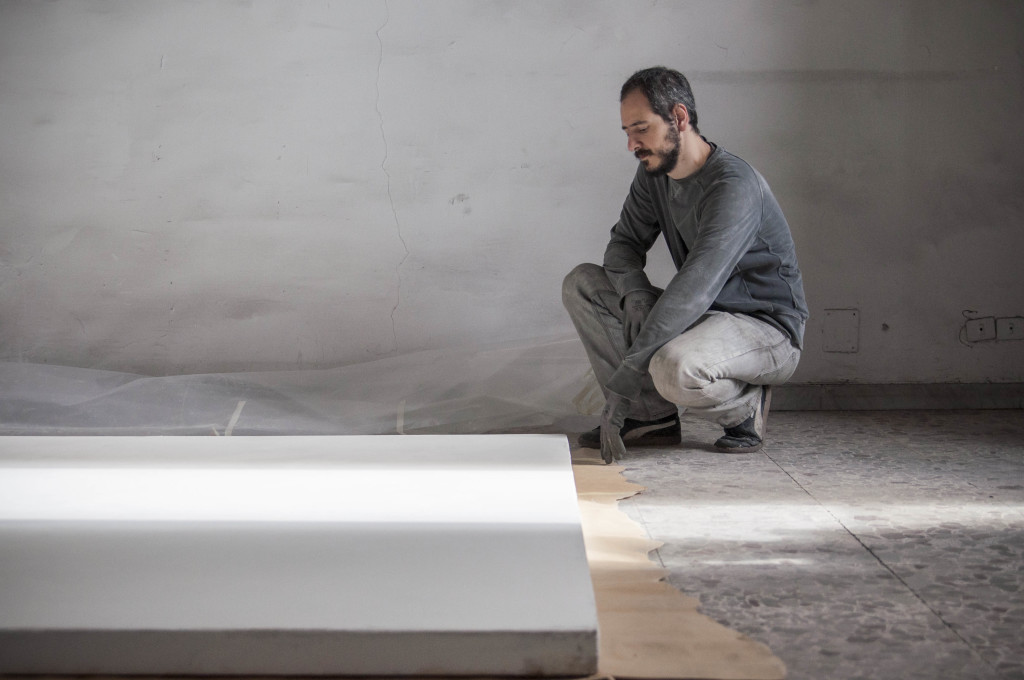 In contemporary society every boundary is expanded to the point of dissolving, the virtual blurs with reality and memory is entrusted to the «ether» through a constant process of fragmentation and dematerialization.  Communities become networks and «contacts» replace «relations». Art, thus, finds itself forced to attempt the reconstruction of a direct and tangible relationship between the collective community and its land in support of the search for its lost identity. The task of artists in the re-appropriation of their public function is to trigger a critical process, asking questions that encourage others to ponder and take a position regarding immediate and concrete issues. This role is in compliance with the artistic quest of Gian Maria Tosatti who is working in Naples to mend the strands of a fabric often lacerated by hostility and paralysis, where a terrible «collective amnesia» is running rampant which inevitably leaves its mark on the city itself. The artist is embracing a necessity and has begun a shared analysis that aims at the understanding of the complexity of real issues in his city and to compose a new geography of memory through the rediscovery and reactivation of forgotten places. 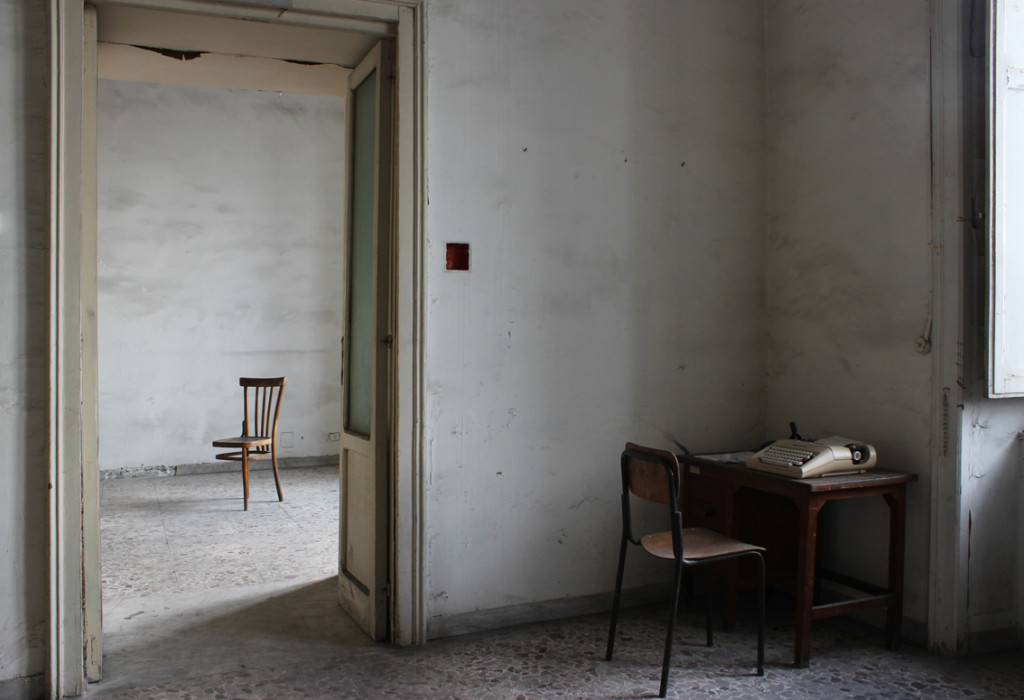 The Sette Stagioni dello Spirito (The Seven Seasons of the Soul) is a two-year project presented by Eugenio Viola now in its second stage – facing the «season of indolence». 2_Estate (Summer) is the work with which Tosatti once again urges on the «social body» of Naples by reactivating another illustrious vestige of the past, the ancient building that once hosted the Municipal civil registry. Even though it is located in the heart of town and is of great historical and artistic value, it seems to have become invisible.

The artist’s work originates with a consideration in the style of Pasolini of contemporary Italy’s «transformation – involution» at the hands of that inadequate Republican Italy void of projects and identity which is at the core of the «political inertia» that the authorities «do not wish to govern by dealing with the causes but only with the consequences», as philosopher Giorgio Agamben explained recently. In line with Agamben’s theories and in the wake of those of Foucault, the artist as «archaeologist of the present» reconstructs the Neapolitan civil registry – symbol of moral apathy – by attempting to go back in time, convinced that «one must recuperate the line of discussion at the moment it began to fray in order to break the gridlock».

A monumental staircase leads to the installation. The huge stairs dictate a slow and deliberate step, accentuating the anticipation, the passage into an intimate and meditative dimension. Once visitors arrive at the first hall, they are overcome with a powerful sense of alienation – the impression of coming into a typical public office where the large binders stacked in bundles on desks, the freshly sharpened pencils, the functioning phones cups of coffee convey a sense that the place had been unexpectedly abandoned. As visitors go from one office to the next, they see thousands of documents («bodies of memory») that narrate the life of so many people: origins, sicknesses, dreams and hopes – sources that recompose «the stories» of a common destiny.

A chilling silence is interrupted only by the sound of the fans blowing on the leaves of the plants, the only sign of motion in an environment in which everything seems crystallized – where plants are the only form of life and they grow out of inertia and end up being overcome by the events, an obvious metaphor for the condition of collective lethargy, that spiritual malaise which weakens and erodes. 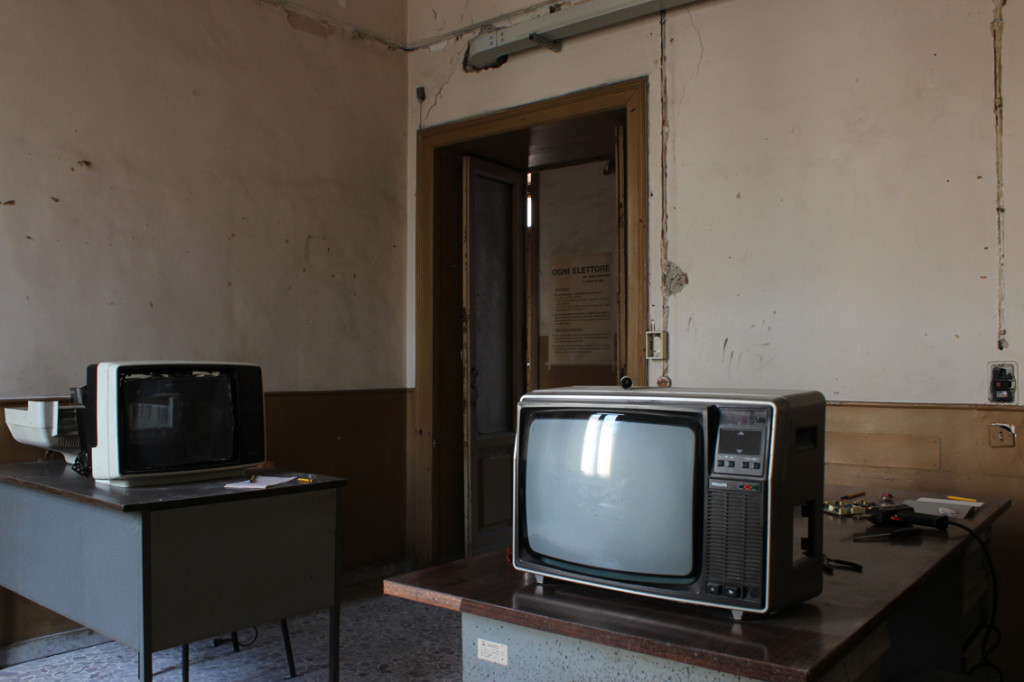 Old computers, floppy discs, cathode ray tube televisions are arranged in side rooms as objects symbolizing an outdated technology that does not correspond with the present and whose information cannot be deciphered. It remains prisoner of those very gadgets and therefore destined to oblivion. At this point, the sound of a voice leads the spectators (almost hypnotically) to a room where utensils, foods and a coffeemaker are displayed. The sound is that of a radio reporting current events, a sudden leap into the contingent that accentuates the temporal contraction of the work and returns everyone to the timelessness of the human condition.

As visitors walk through the room, they see scraps of old newspapers, piles of debris, the rubble of recent history that we never question – passively accepting its consequences. And yet, Tosatti reminds us that Italy has noble and profound intellectual roots which embrace the «culture of beauty» intended as the loftiest expression of the spirit and so he places a large canvas elaborated in gold leaf in the final hall as a testimony to an ethical and intellectual reawakening.

Once again, the total work of Gian Maria Tosatti unites art and life by offering the public something they can identify with, a profound consideration of human nature and a cold, sharp snapshot of today’s political and social situation that leaves a tangible mark of an act of artistry which plants itself in the community’s social fabric and changes it.

The synaesthetic Installations by Cildo Meireles