The synaesthetic Installations by Cildo Meireles

Sculpture, sound, accessible structures that invite the public to suspend reality and enter magical spaces, projects and programmes that convert art’s virtual time into «the audience’s real time»[1]. Exciting, immersive and involving several senses, this work by Cildo Meireles (b. Rio de Janeiro, 1948) transforms the spectator into actor, into an integral part of the work itself and into a central figure of a tale that aims at restructuring the statutes of art by converting it into an ethic and aesthetic edifice, a meditative instrument and in the action of lyrical denunciation. «In my works dating from the early 1970s, power was always linked to an iconic representation of its symbols in political, military, capitalistic, institutional and market references etc. But over the years, my research has shifted more towards the idea of the power of the public, of its way of transformation to modify my work,» the artist commented during his interview with Ginevra Bria[2].

Driven by a wish to regenerate the social role of the artist, Meireles aims at building physical and metaphorical atmospheres which convert the ordinary into the extraordinary, in alienating formulas that reconsider the world of life from a new height, from an imaginative platform that bypasses the commonplace in order to orchestrate a total territory directed at adopting human states of mind as privileged material. 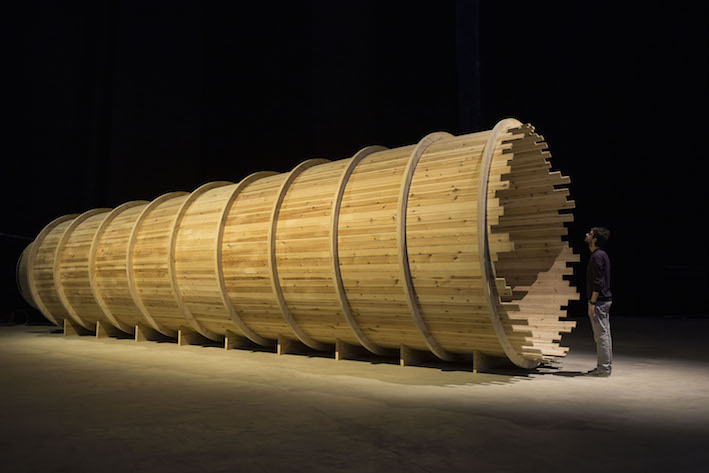 Considered a pioneer of Latin American conceptual art and renowned since the time of the Tropicália movement for his tactics centralizes against Brazil’s political-military repression, Meireles is the figure of art that avoids labels to demonstrate a constructive short-circuit, a programme that strokes through plastic systems in which the poetry of art is always unveiled by the prose of life (Bonito Oliva).

«I remember the Information exhibit at MoMA in 1970 that started off the popularity of conceptual art. Personally, I thought it terribly boring. You had to read and read and read…And in 95% of the cases, texts by artists are abominable. It seemed to me that conceptual art had abandoned the possibility of being fascinating. I think that works have to be captivating: even for only a fraction of a second, they have to take you away from this place and time. Conceptual art relinquished this and I was against it for a long time. Then, about ten years ago or so I was talking with a friend of mine who had been imprisoned by the dictatorship regime during the 1970s, my son’s godfather, and he told me that while he was in prison all it took was a breeze blowing something into his cell – anything at all, the red strip at the top of the cellophane around a pack of cigarettes – to get him to dreaming. That really choked me up and I began thinking that conceptual art is probably the most democratic of all movements. It doesn’t need a thing, it creates total authorial freedom and it is the art form which is most committed to freedom. And so I have reconciled and now I even forgive the hideous texts by the artists»[3]. 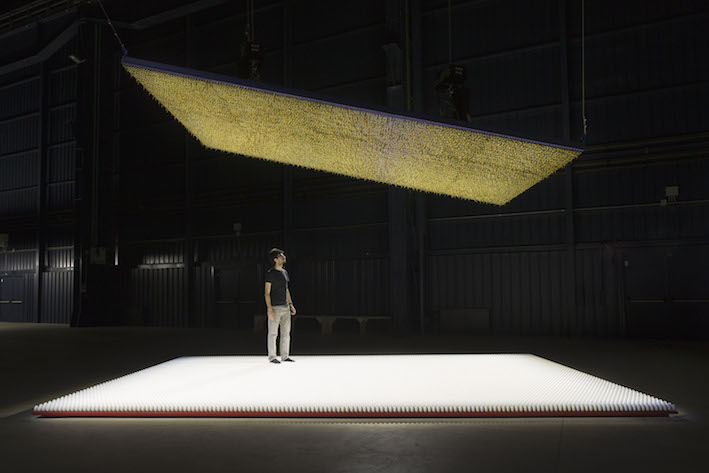 Meireles is proposing 12 significant works for his first large retrospective exhibition in Italy. The Pirelli HangarBicocca is hosting 12 stages of a stylistic timbre that reinterprets the halls of the Hangar with a verve that is unique and precious; 12 important cardinal points that while on the one hand display the artist’s idea and prospect from 1970 until now, they also shed light upon his need to create totems, spacialized moments, considerations on the present and on history.

To open the itinerary we have Cruzeiro do Sul (1969-1970) – un microscopic wooden cube made in pine and oak – positioned in the Hangar’s Piazza which demonstrates the research that Meireles has defined as being humiliminimalism: linked to the minimal humbleness of sculpture and the minimum units of sense ideally identified with the Tupi Indios «whose legend tells of how the god of thunder manifests its present when the two pieces of what are considered ‘sacred wood’ are rubbed together»[4]. Acting as a counter-altar to the microcosm of Cruzeiro do Sul and to open the spatial dances of Corpo Alto, there is the Atravérso installation (1983-2014) which leads the spectator to a walk along a terrain of glass, to follow the path of a spiky and dangerous heterotopias and to appropriate the materials of reality in the quest of new and unexpected sensations.

The itinerary closes – and the ending is ever so sweet! – in the space of the Cubo with Marulho (1991-1997), a special space that invites the public to leave reality behind once and for all and enter into an enchanted world where a mesmerizing ocean of paper (made up of 17,000 book size sheets) presents everything we could possible say when we take the voice out of words. In fact, this is a visual elegy through which Meireles proposes a small (intimate) pier, or a tiny harbour without boats and free of decorations, a locus that becomes a logos, an imperfect time of discovery and transit necessary to discovering and experimenting – if only momentarily – (with) the work.