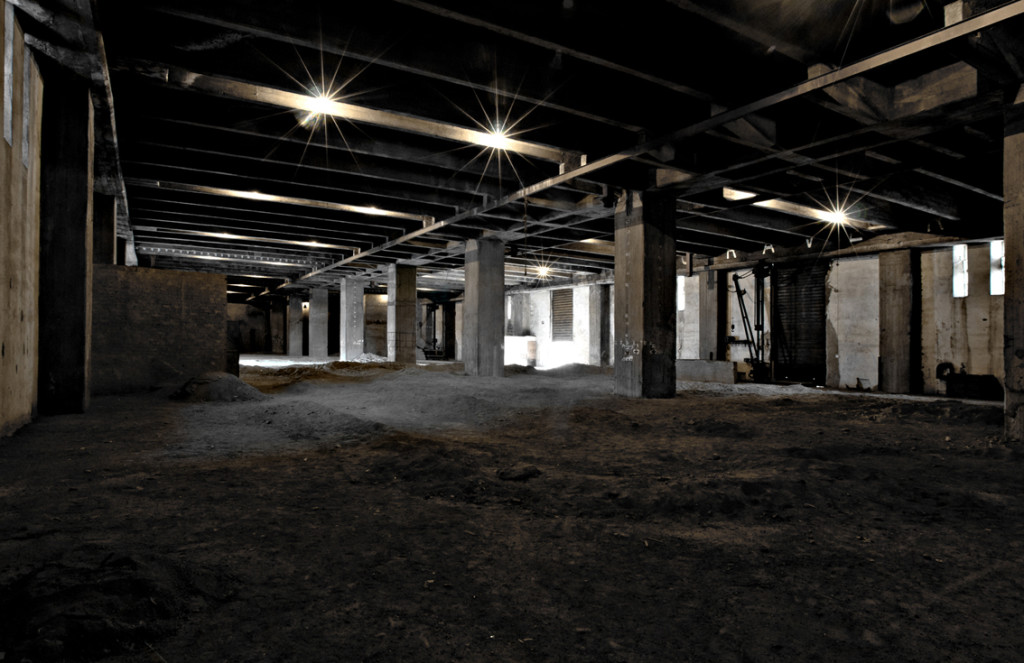 3_ Lucifero is the third chapter of Sette Stagioni dello Spirito (Seven Seasons of the Spirit), the Neapolitan project of Gian Maria Tosatti, curated by Eugenio Viola and hosted at the former General Warehouses of the Port of Naples. The enormous abandoned building has been converted by the artist  into one of his interactive backdrops where the only protagonist is the spectator whose habitual process is to explore the scene on his or her own, resulting in an immediate absorption of the gigantic emotional presence.

The theme of this chapter of the lengthy introspective and cognitive journey that began two years ago is predominantly theological. In fact, the author asks himself – and us as well – to ponder the concept of free will and the unavoidable possibility of making mistakes, reflecting upon the first error of biblical history: the one made by Lucifer. This fatal error caused his tragic descent to the centre of the Earth (as told to us by Dante in his Divine Comedy), thus giving origin to the infernal abyss and its nine circles. This would be the dawn of the dichotomy between good and evil, benevolent forces and evil identities that offer us time and time again the opportunity to choose our own paths. Lucifer is therefore the repudiated angel who continues to be a part of the divine “master plan”. The work of Gian Maria Tosatti creates the premise – yet again – to ponder the human condition and the possibility of aberration as well as that of redemption. 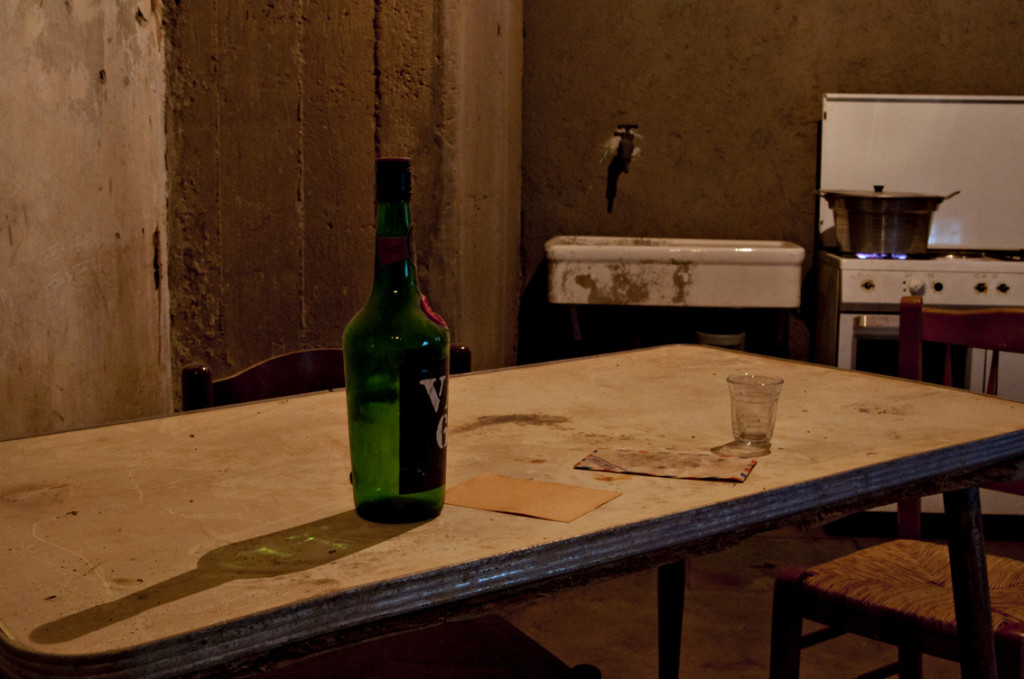 The spectator fumbles along within this work; human presence is only implied by a handful of references: X-rays, a typewriter, a pot on a stove and a film from the 1940s broadcasted on a black and white television set – the filter through which a recluse like Lucifer can observe the world. After all, the media has become the only means we all have to observe life – as if we have all become prisoners of our own time. Technology is the narrative through which the history of humankind is told: reels of film collected in an old trunk are the instruments we need to comprehend human existence, by inducement and attempting to identify with and perceiving emotions that could even be more authentic than the real ones. Tosatti’s Devil resembles Wim Wenders’ angels who come to Earth to discover the authenticity of life through experience, taking note of things that humans ignore or are incapable of recognizing their value because they are experienced on a daily basis. Space is transformed into an extraordinary metaphor that implies the distorted relationship humans have with “things” and their inability to fulfil and discern them. This is expressed by T.W. Adorno’s observation in his Minima Moralia:

“Technology […] is making gestures precise and brutal and with them men. It expels from movements all hesitation, deliberation and civility. It subjects them to the implacable, as it were ahistorical demands of objects. […] Not least to blame for the withering experience is the fact that things, under the law of pure functionality, assume a form that limits all contact with them to mere operation and tolerates no surplus – either in freedom of conduct or in autonomy of things – which would survive as the core of the experience because not consumed by the moment of action”. 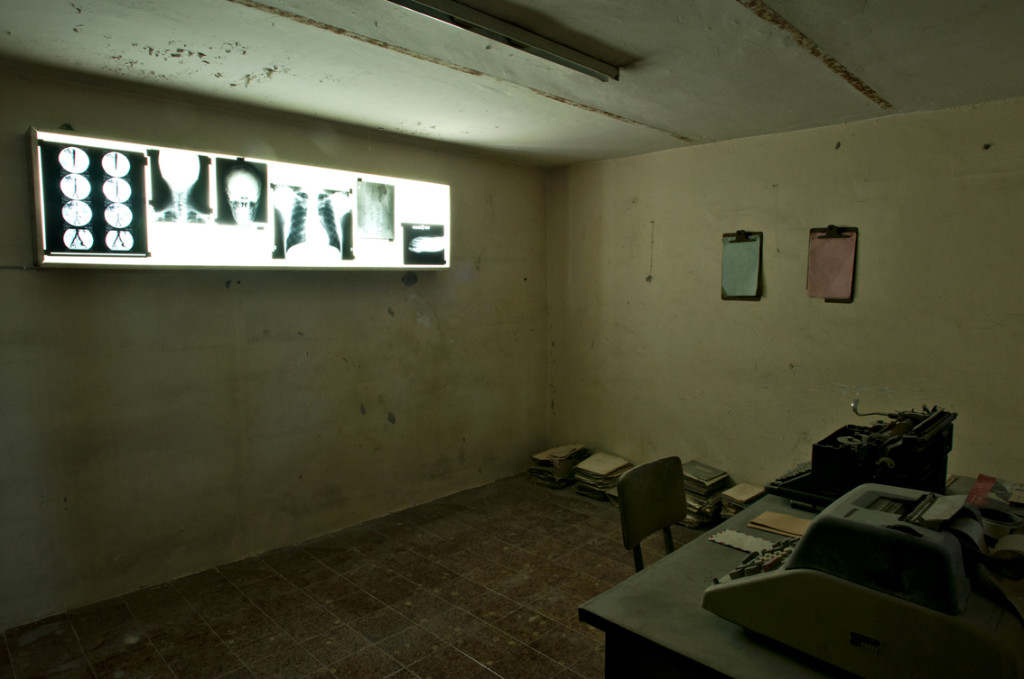 The enormous gold letters surrounding the area are in reference to passages from the Sacred Scriptures (Genesis 3:5; Isaiah 14: 12-14; Matthew 4:8), and act as frame to the angel’s prison – marking the outer perimeter of a concentric mechanism that finds its fulcrum with humankind, the public. The work is a continuous sequence of reflections and refractions, stories and myth, real and surreal – a place charged with “nonsense” in which we are induced to wander and wonder.

Darkness and splendour alternate incessantly: the area is split on two levels and presents intensely dark corners lacerated by blades of lateral light, aragonite shines brilliantly in a small, dark room – an allegory of the Devil’s lost radiance – and a semi-dark second level hosts a splendid room covered completely in gold leaf. Tosatti imagines that the “condemned” creature lives in this golden room, where he can leaf through Jules Verne’s Master of the World and an exercise book containing handwritten notes of God’s monologue from the Book of Job. The golden surfaces are reminiscent of medieval paintings, an infinite and timeless place with a bed too small for a huge monster like the Lucifer described by Dante. But there is also the passage of the infernal funnel through which one can still see heaven. 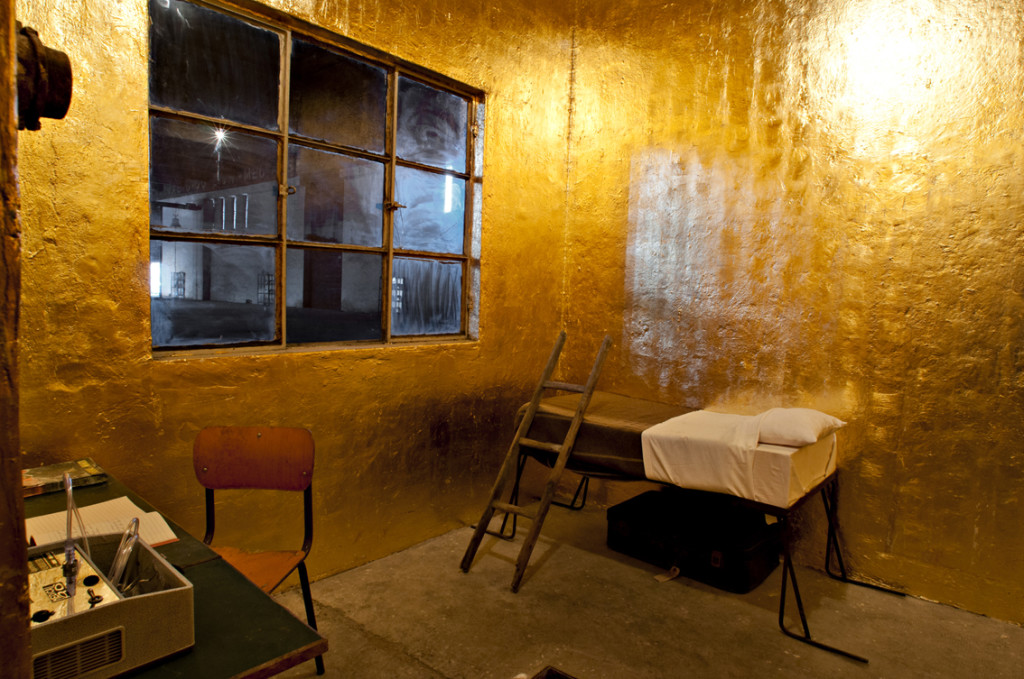 There are many references to the two preceding works, links recalling the previously seen “rooms of the soul” to remind spectators that the argument is a single one and (above all) this is an open work. Even though the social nature and the “re-activating function” of places and memories which distinguished the first two steps have been neglected, the work is situated in a crucial point of the city or – more precisely – at its core, the port: a “non place” marked by the endless passage of indefinite identities, where an infinity of exchanges with “others” delete spatial/temporal confines to the point of making them vanish in a suspended atmosphere, fully reinstated by the artist in his “double basilica”.

The educational method of Giuseppe Stampone