Gianfranco Baruchello’s largest retrospectiveis currently on display at the Museum of Modern and Contemporary Art of Trento and Rovereto (Mart). Baruchello is an artist who has been crossing the XX and XXIst Century, complicit with with some of the most important thinkers of our age, such as Marcel Duchamp, John Cage, Jean-François Lyotard, and Italo Calvino. He is the author of a creative grammar that has always been travelling against the flow of canons. 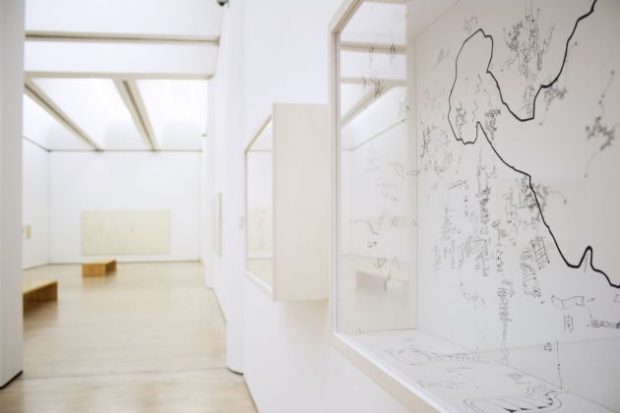 Over 300 of Baruchello’s works, for the most part never seen before, presents themselves as micro-worlds, fragments of a narrative and the story of a life unfolding day by day, moving through disciplines, materials, images and writing. Carla Subrizi, curator of the exhibition, describes them as ‘alphabets’. “These works are produced by assembling images and ideas, responding to the logic of the archive and free storytelling”. Story-telling and the archive are binaries along which Baruchello’s narrative moves, miniaturized on canvasses where the space is proportionally immense, “projects, suggestions, and notes that aim to affirm the spirit of an intentionally light and impredictable creation, the result of an internal dialectic between encyclopedia and anarchy, Cartesian spirit and Duchampian spirit, an attempt to achieve an arrangement, and the impossibility of doing so”.[1] This is how the Italian art critic Achille Bonito Oliva defined his work in the catalogue of his major retrospective at ZKM Museum in Karlsruhe (Germany) in 2014. 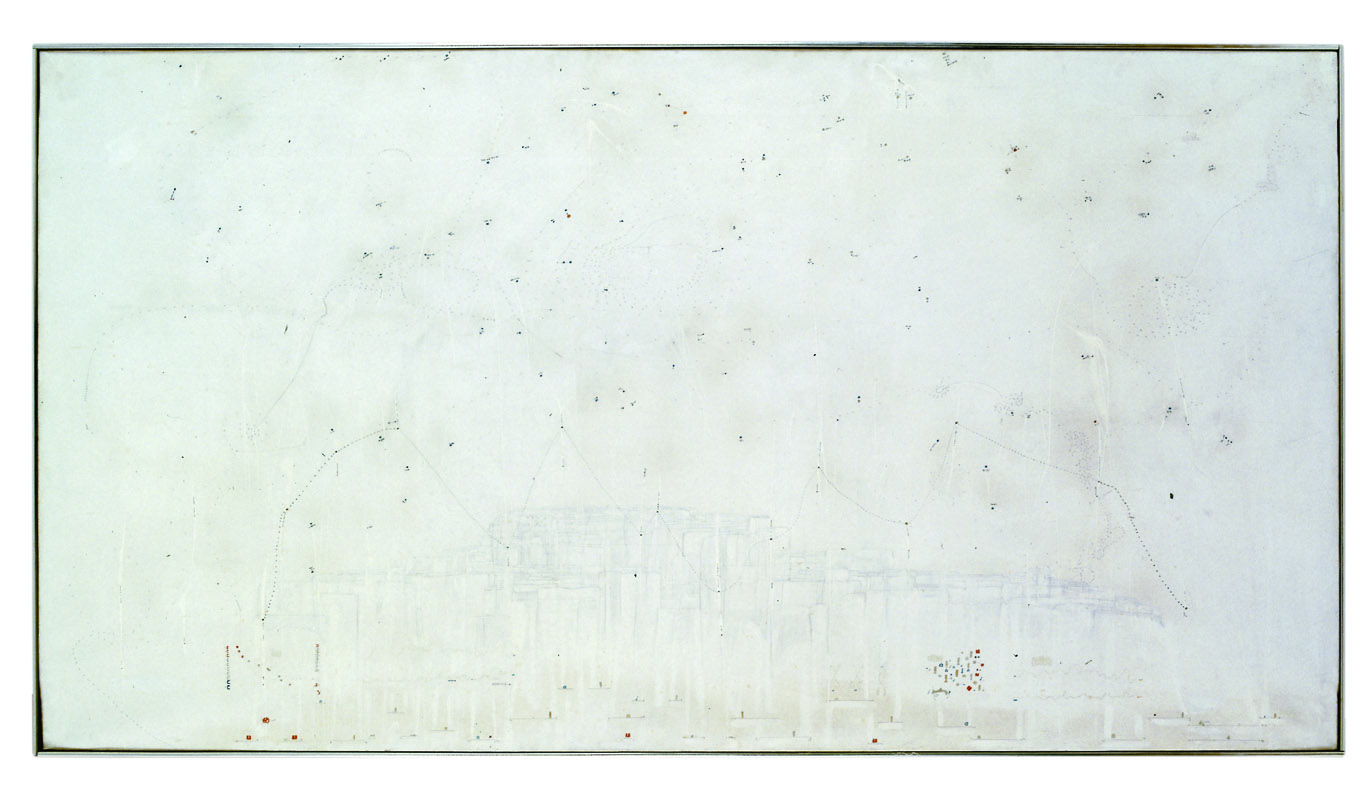 Paintings,installations and pioneering cinematographic experiments: all works by Baruchello position visitors at the threshold of different worlds – dimensions that open on multiple fronts and engage diverse perceptive planes. Looking towards the distance visitors glimpse a number of micro-cosmos taking shape in spaces which become infinitein the breath of the canvas. Looking closer, the content becomes ever more fleeting. “Baruchello allows us to continuously roam between tiny fragments and totality, in accordance with a movement that has a living logic”.”[2] This is how Tommaso Trini described the feeling of fronting the works  on the occasion of an exhibition in Milan in the 1970s. 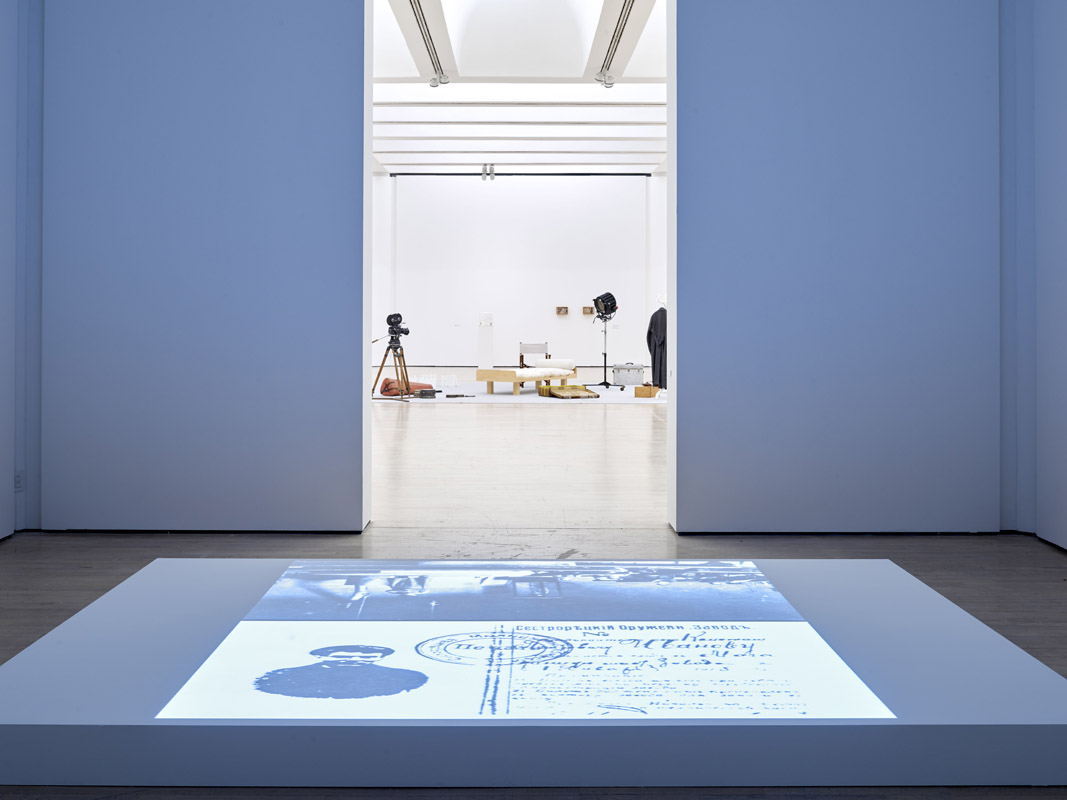 Materials, but also all kinds of supporting devices, and space itself become complicit in a narrative that moves between worlds and between opposites, including the constructive and deconstructive dimension of the archive. The archive, at the basis of every single work, is extended to the Foundation in which, since 1998, Artiflex, a fictitious society founded in1968 to replicate the industrial process, and Agricola Cornelia S.p.a., an agricultural company established in 1973 to test the relation between art, agriculture and aesthetics, converge. The Foundation, in addition to the area surrounding the artist’s studio-home, currently includes another venue in the district of Monteverde Vecchio in Rome, close to theJaniculum, where it continues to operate. Together with the organisation of a series of events, the Foundation pursues its research in archive methodologies. 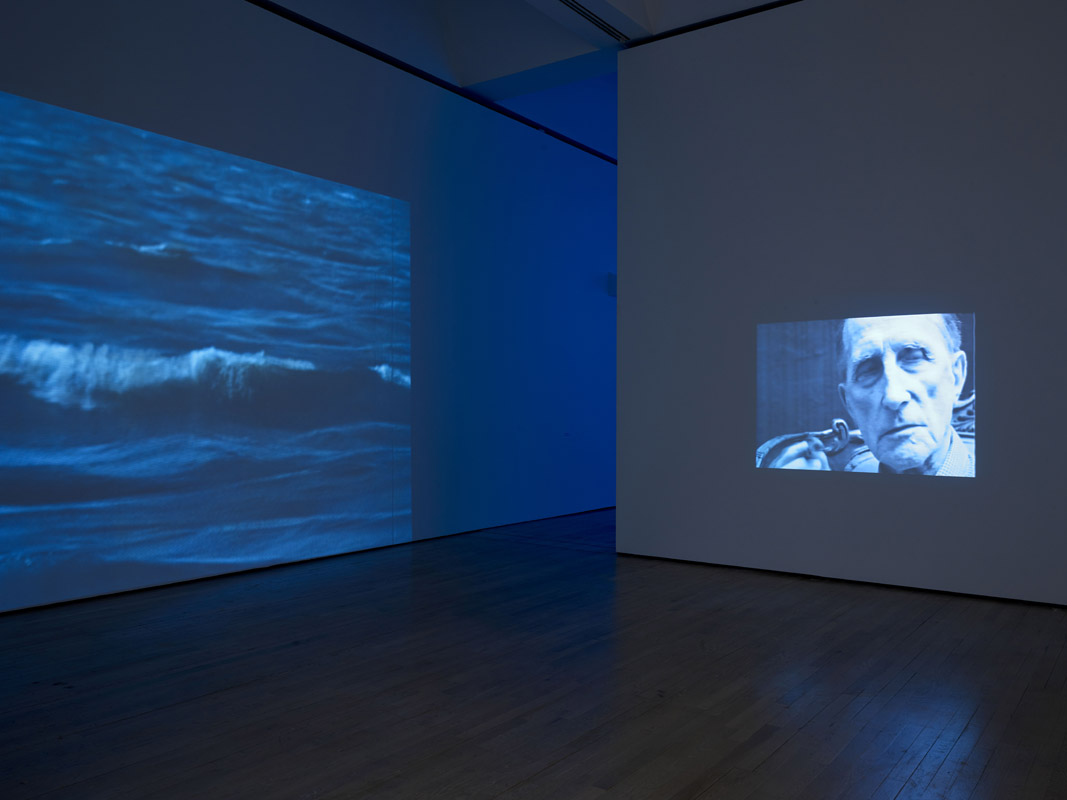 The exhibition opens with the Giardino di piante velenose (The Garden of Poisonous Plants) which tells the story of the artist’s relationship with natureand closes with several works from his movie production. These include Il grado zero del paesaggio (Zero Degree Landscape), Baruchello’sfirst film, a “degree zero of the moving image”[3],as Carla Subrizi pointed out. Alongside his historical production, there are works created specifically for the exhibition: L’archivio di chi guarda (Viewers’ Archive), ‘a historical reflection on the collective and individual gaze’, Le moi fragile (The Fragile Moi), ‘an installation on the relationship between dreams, politics and cinema which takes shape as a simultaneously psychoanalytic and cinematographic set’, and the Oblioteca (Library of Forgetfulness), an archive on forgetting built on site in bottles sealed with the artist’s fingerprints which enter into a dialogue with La Grande Biblioteca (The Great Library), a collage that recounts the desire to accumulate intelligence. The exhibition, as much as every single work, should be viewed multiple times, without forcing the temptation to look for a way to cross the threshold where the author positions us in such a delicate balance. 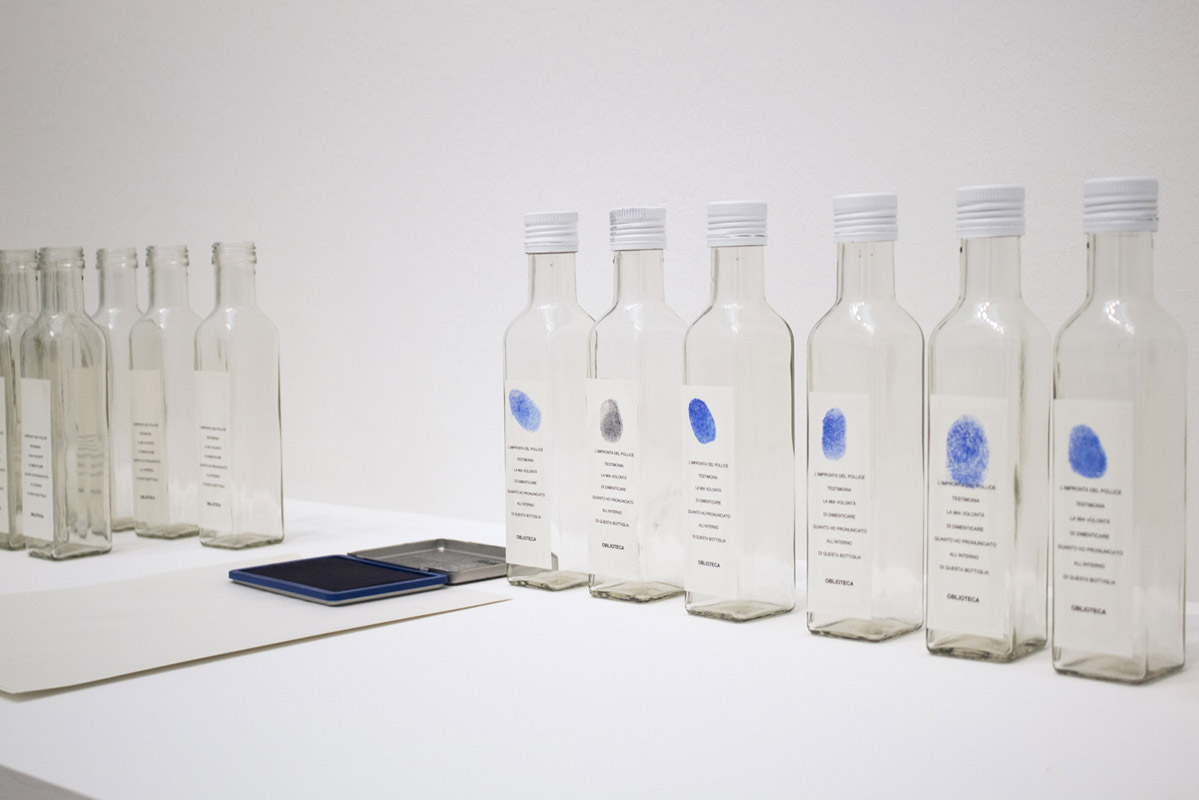 On September 14, at the MART Museum,  5p.m. it will be presented the catalogue that accompanies the exhibition