by Arshake
in Events, exhibitions, News

The first solo exhibition by Japanese artist Ryoichi Kurokawa to be featured in an Italian museum, «al-jabr (algebra)», can be seen at the Town Gallery inside Palazzo Santa Margherita in Modena. The exhibition is organised on the occasion of the 2018 Philosophy Festival, dedicated this year to the theme of Truth. Curated by NODE – International Festival of Electronic Music and Live Media – taking place in Modena from 14 to 17 November 2018 – the exhibition gathers together some of the most significant and recent productions by Kurokawa, taking visitors through a multi-sensorial journey consisting of imposing audiovisual works, installations, sculptures and digital prints. 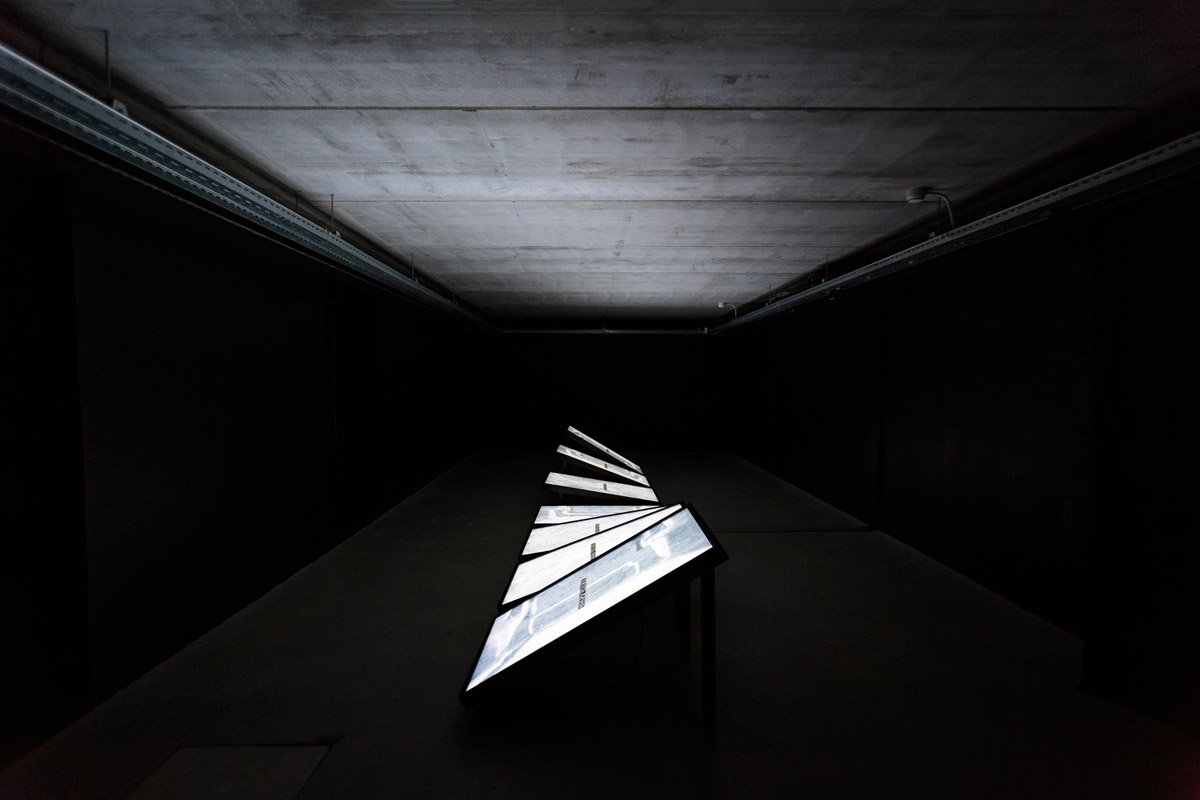 Originally from Osaka but resident in Berlin, Kurokawa describes his work as “time-based” sculpture, in other words an art founded on the passing of time where sound and image come together in inseparable ways. His audiovisual language alternates complexity and simplicity, combining these aspects in a fascinating synthesis. These symphonies of sound, together with computer generated digital landscapes, change the way the spectator perceives reality.

The key theme of the exhibition is represented by the concept of “union of parts”, referenced through the title “al-jabr”, the Arabic root of the word “algebra”, whose etymology indicates the reunion of broken parts. 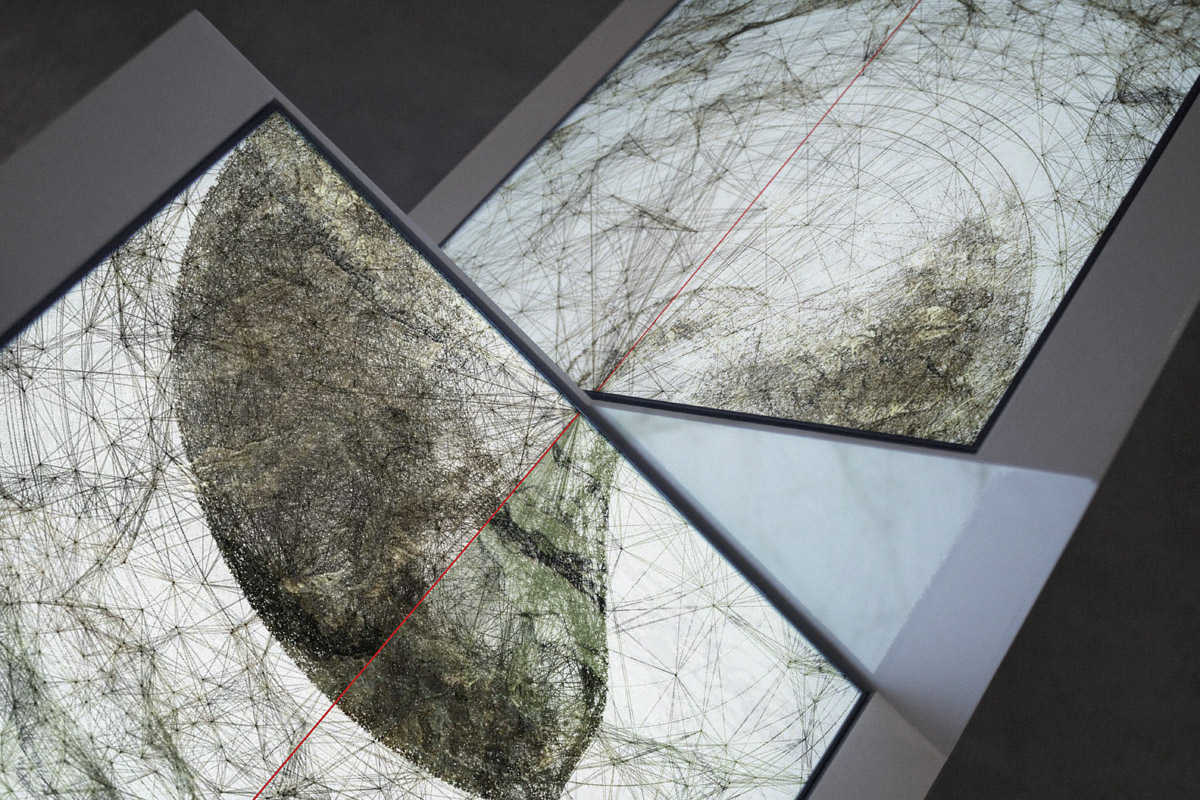 The exhibited works reintroduce concepts and methodologies such as the deconstruction and subsequent reconstruction of natural elements (elementum, lttrans and renature), the reunion of broken structures (oscillating continuum), the re-elaboration of laws and scientific data (ad/ab Atom, unfold.alt and unfold.mod).

Such methodology brings to mind a modern and technologically advanced version of the artistic techniques of kintsugi. These techniques were developed at the end of the fifteenth century by Japanese workers in ceramics to repair cups and vases, in which gold dust is used to highlight the rupture lines turning their fragility into their strength. Kintsugi is not only an artistic concept, but has deep-reaching roots in the aesthetic of wabi-sabi, the world vision typical of Japanese culture founded on the acceptance of the transitory nature of things, also echoed in Kurokawa’s poetics. 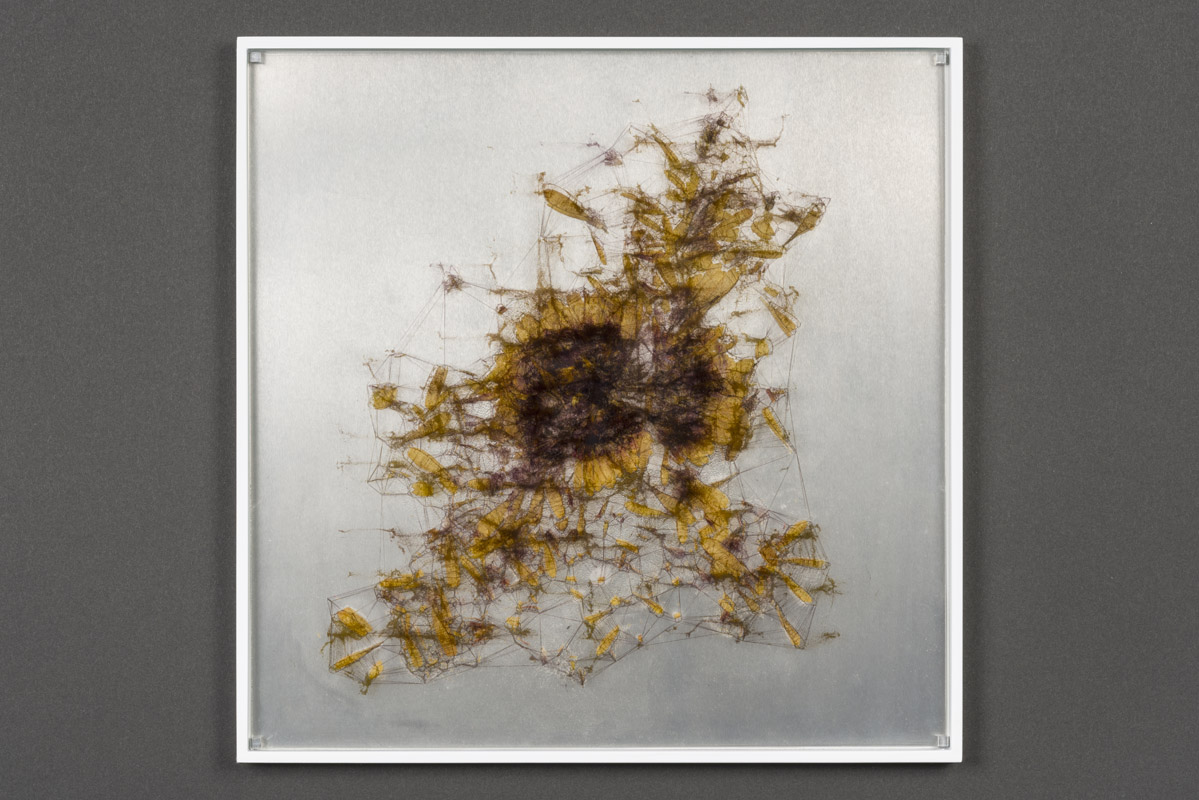 The series elementum (2018) is a case in point: dried and pressed flowers that have lost their original beauty are reassembled by the artist and enriched using a technique on glass. A process of digital elaboration of the image that appears to connect the various fragments and give new life to the flower, valuing the process of decadence produces the final work. 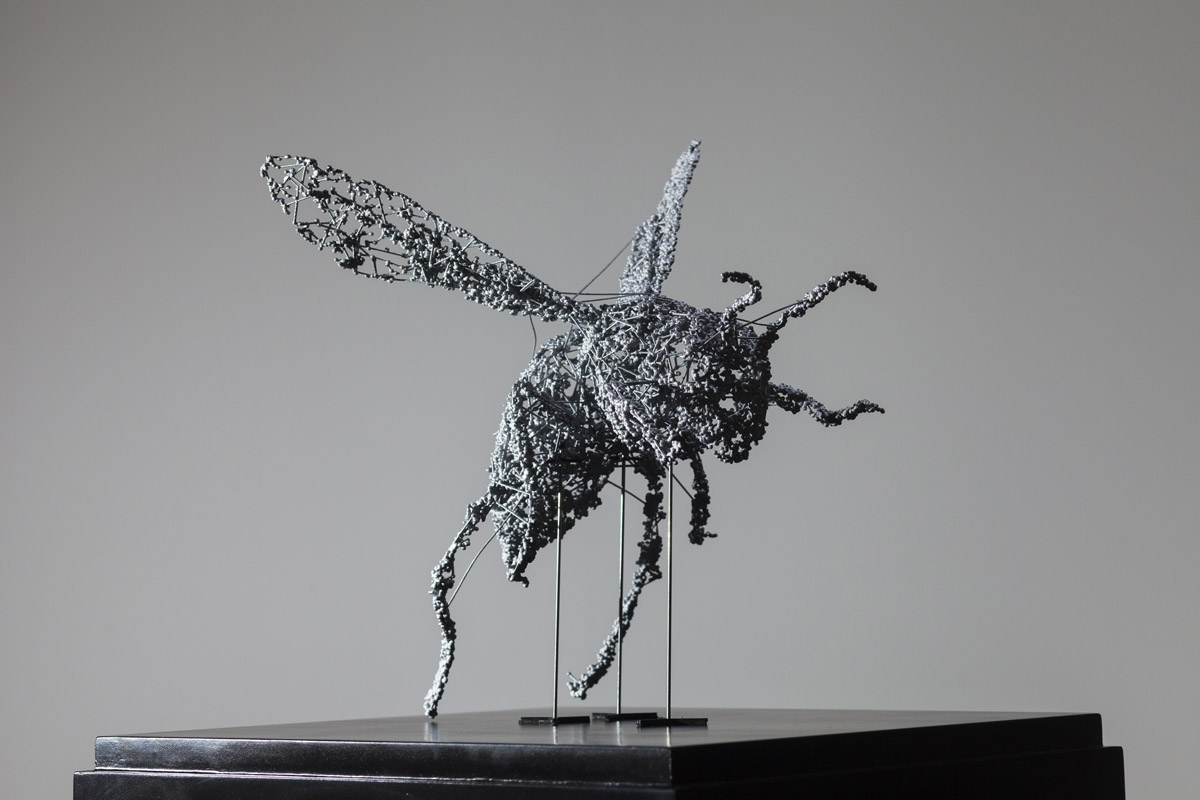 In a similar way, the abstract graphics of the series lttrans (2018) and the sculptures belonging to the series renature::bc-class (2015) can be perceived as images of flowers and insects but, on going closer, are revealed to be an ensemble of strands and particles: this is a digital representation of the truth in which the process of reconstruction is rendered visible, exactly as it occurs in Kintsugi. 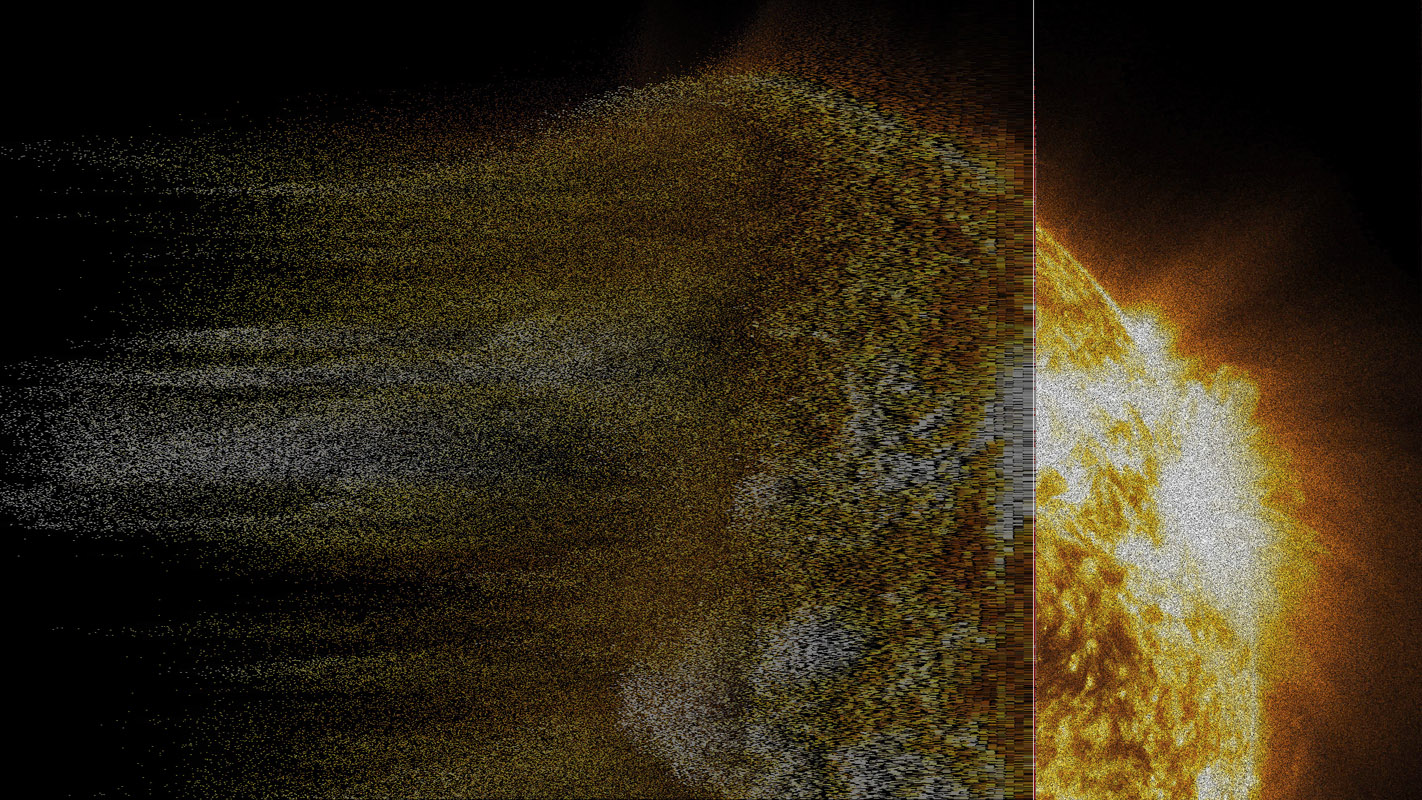 According to Kurokawa, the observance of nature is understood as a scientific analysis and, over the years, his interest in this topic has led him to increasingly involve members of research institutes in the creative process. The audiovisual installation unfold.alt (2016) takes inspiration from the latest discoveries in astrophysics and attempts to translate phenomena characterising the formation and evolution of stars. To create it, Kurokawa collaborated with Vincent Minier, an astrophysicist at the Institute for Research on the Fundamental Laws of the Universe at the Fundamental Research Division of CEA-Irfu, Paris-Saclay in Paris. 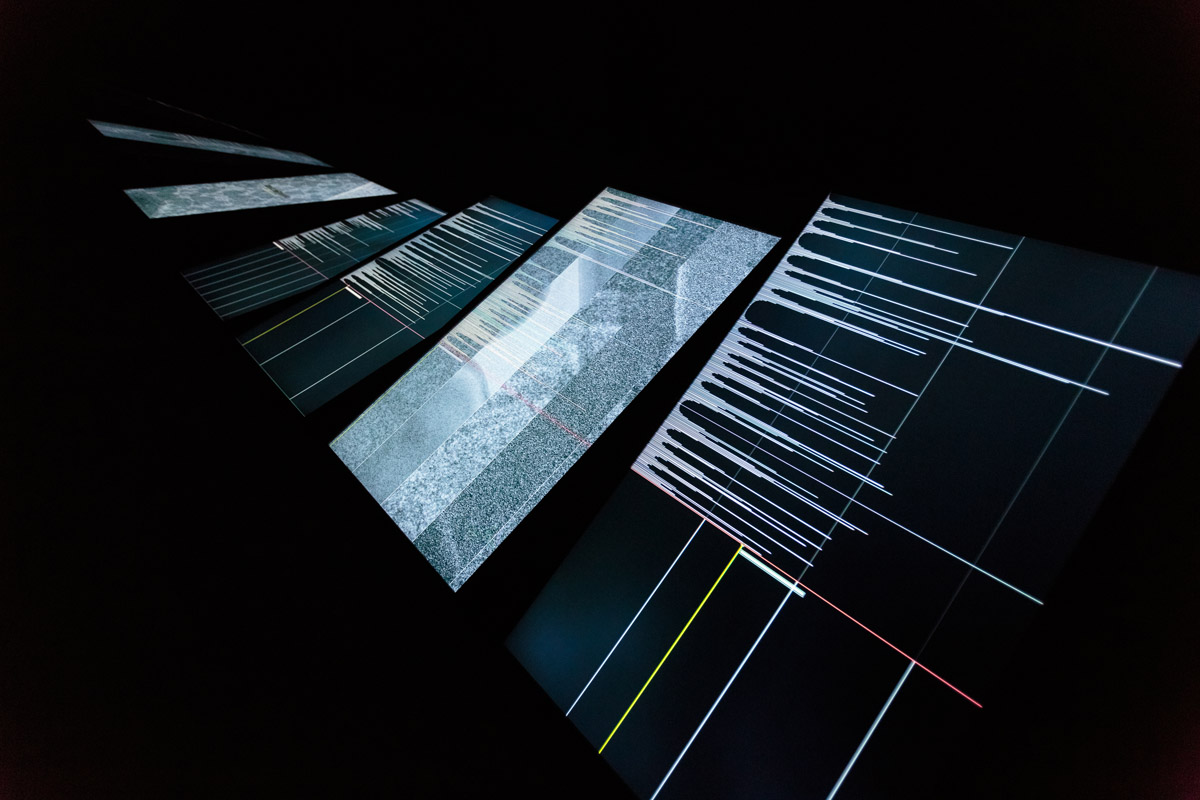 In ad/ab Atom (2017) Kurokawa changes the optic of the instrument, moving from the telescope to the scanning electronic microscope used in research on nanotechnologies. Made during a residency at INL, the Iberian International Nanotechnology Laboratory in Braga (Portugal), the work consists of seven high definition screens positioned in a spiral. 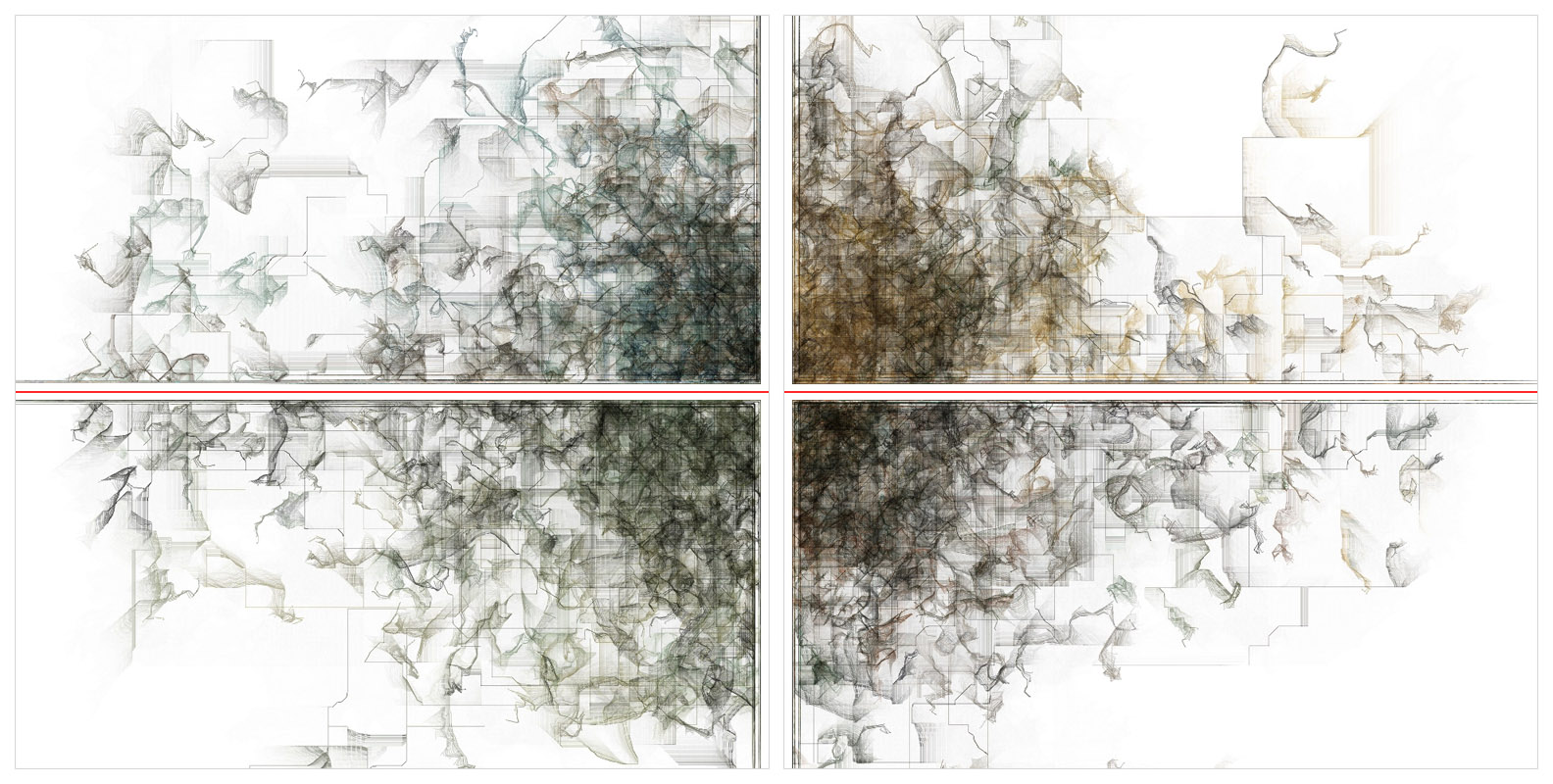 Through audiovisual phenomena generated from the elaboration of quantum materials, Kurokawa creates a journey in nanoscale in which it is possible to observe the extreme deformation and abstraction of the atomic world. Similarly, the audiovisual sculpture oscillating continuum (2013) brings together the infinitely big and the infinitely small in the universe, attempting to represent the constant search for balance inherent in all the force and matter present in our universe.

The art of Ryoichi Kurokawa, therefore, intends to make multiple perspectives on reality accessible to the public – perspectives that would otherwise be impossible to decipher, suggesting fascinating parallels with our inner world. (from the Italian press release)

Ryoichi Kurokawa (Osaka, 1978) is an audiovisual artist. Active from the late 1990s, Kurokawa uses computers to generate installations and performances in which sound and visual elements are closely interconnected, seeking to create synaesthetic experiences. Considered a pioneer of art generated by using new technologies, Kurokawa started his artistic journey as a musician and over the years continued to be extremely interested in performative acts. As well as creating multimedia installations, he recently began to sculpt and print, experimenting with new creative processes. Over the course of recent years his interest in science has led him to set up important collaborations including one with the astrophysicist Vincent Minier from CEA-Irfu (Paris-Saclay) and another with INL, the Iberian International Nanotechnology Laboratory. His work has been displayed at festivals and international art centres, including the Pompidou Centre (Paris, 2018), Palais de Tokyo (Paris, 2017), FACT (Liverpool, 2016), Venice Biennale (2011), Sónar (Barcellona, 2009), Transmediale (Berlin, 2009), Tate Modern (London, 2007), Ars Electronica (Linz, 2006) and Mutek (Montreal, 2006). In 2010 he won the Golden Nica at the Prix Ars Electronica in the Digital Musics & Sound Art category.