A new Art and Data Centre in Rome

by Giorgio Cipolletta
in exhibitions, focus

For a relational aesthetic ecosystem.

Art is an unrecoiling weapon, and its development is determined not by the individuality of the artist

but by the dynamics and the logic of the material itself, 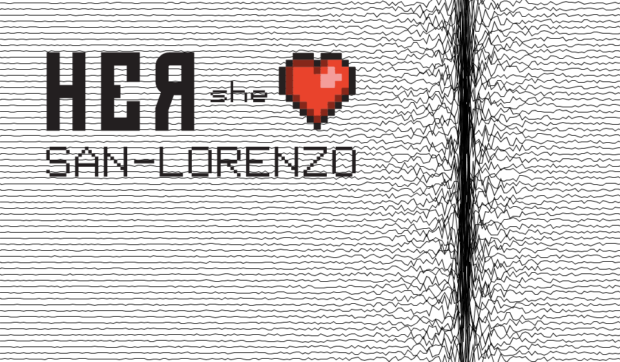 What is the aim of a Festival dedicated to the relationship between art and data? Does a complex aesthetic of data and relations really exist? Let us return for a moment to the recent Facebook and Cambridge Analytica events. Let us consider our daily relationship with data, our bodies and our intimate relations with technology. What are we sharing every day: our stories or our inner self? What are we selling? Has the (unconditioned) use of digital platforms (perhaps) turned us into a commodity? We believe it is essential to begin thinking about networks, data and artificial intelligence which are shaping the world, changing our ability to understand it. These are the reasons for the establishment of HER (Human Ecosystems Relazioni), or rather the moving of its office from London to the San Lorenzo district in Rome, the neighbourhood where the first micro-festival on Art and Data was organised. Who is behind this sensitive yet equally important operation? 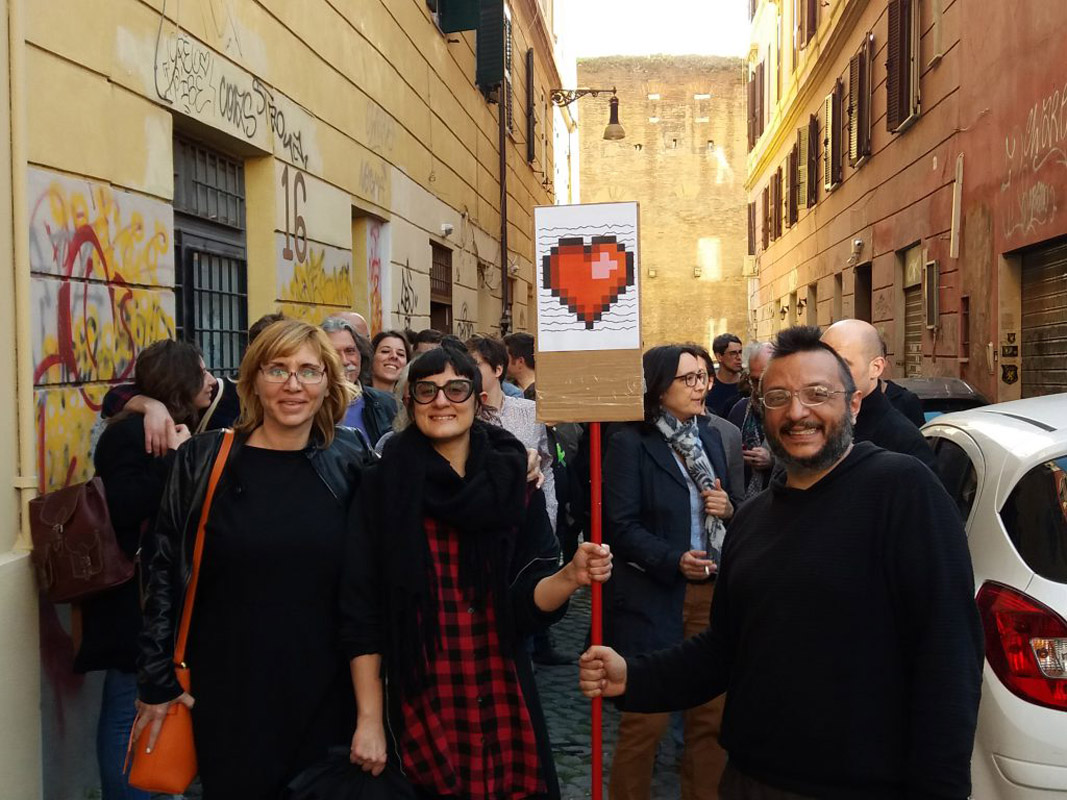 Salvatore Iaconesi and Oriana Persico have been, for a very long time, “fighting for” and “activating” profound relationships across the world on current themes, participating in a “social renewal” and carefully “paying attention to” the delicate relations which exist between algorithms and human beings. The founders of AOS (Art is Open Source) have grasped the importance of this profound, existential change. In fact, we should not begin with techno-logical facts, but with anthropological change itself. Data has contributed to a diverse understanding of these changes in the world and of how complex these are, given the psychological complexities as well as economic, social, financial, relational, communicational, informational, aesthetic and even political ones. Technology is never neutral: rather we invent it and are invented by it in turn. Technology interacts with our (apparent) level of freedom and power models while profiling our desires (customer satisfaction), which is why the Centre for Art and Data was established in the San Lorenzo neighbourhood in Rome. The Centre carries out data research, turning it into a cultural need. On 7 and 8 April 2018 the neighbourhood Festival HER-She Loves San Lorenzo, was launched, organised by HER- Human Ecosystems Relazioni and with the active involvement of the following bodies: Rome University of Fine Arts, Art is Open Source, Circuiterie, ESC Atelier, Nuovo Cinema Palazzo, Rossmut Gallery, Flyer Communication, Association 4k, BAICR, 4Changing and with the participation of Exibart, Arshake and the Giornale delle Fondazioni. These two days initiated a (necessary) debate starting from the first questions posted by HER and the role art (in its widest sense) has in this context. We begin to notice, in fact, how artworks build (implement) new relationships and collaboration dynamics, eventually incorporating the logic of algorithm, artificial intelligence and “computational government” and the way in which these influence social and psychological change. The festival, to quote the founders’ words, is the centre’s public event which concentrates on innovation, with a European and Mediterranean focus, at the nexus of art, science, technology and data. 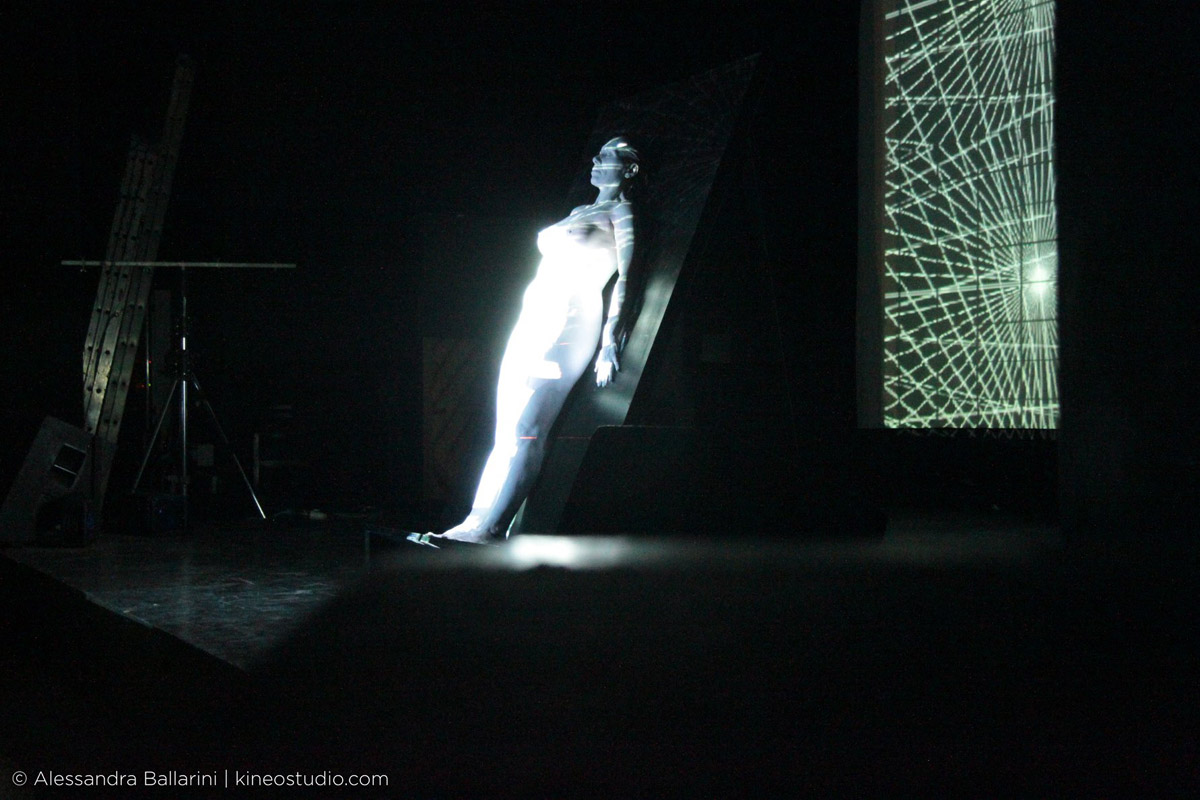 On the afternoon of 7 April at the offices of HER, in Via di Porta Labicana 17, the ribbon was cut. Three works were presented which explored data drawn from social networks and the human body: 10 Minutes in Detroit, OneAvatar and #MosaicoTorino. The first two pieces are by the HER founders, whereas the third work is by Alessandro Ottenga. The following event was Alessandro Ranellucci’s preview of the conference Data Driven Innovation. Continuing our extensive itinerary, the multimedia installation Accelerator was presented at the Rossmut Gallery, having already been shown last year as part of the Art*Science2017 initiative. This was an idea of Pier Luigi Capucci (director of NoemaLab) to celebrate the 50-year anniversary of the international magazine of art, science and technology Leonardo (MITPRESS). Accelerator is a work that chronicles how scientific innovation “accelerates” human language, contaminating it and adding words, ways of saying and seeing – an exploration centred on the way science “accelerates” culture. Collecting data on the web and social networks, the work by AOS uses an analysis of neutral language in order to understand how concepts and words that have been used in scientific discoveries from 2001 to the present day have entered people’s everyday global language. Maps, sequences and visuals intersect and offer a “meditative” experience based on data. The meeting at RUFA Space was also very inspiring, providing a space for a transdisciplinary reflection on Big Data and the aesthetics of complexity with Arianna Forte (the Festival’s curator), Valentino Catricalà (curator of the exhibition Human+ at the Exhibition Palace in Rome), the theorist Elena Giulia Rossi and the tireless communicator Marco Stancati. Together they productively discussed the strong relationship between us and data, starting with the San Lorenzo neighbourhood and conducting an anthropological investigation among its residents, as was done by Stancati himself. The speakers also reflected on the “viral” beauty of algorithms and viruses (among which we can cite Alex Dragulescu) mentioned by Elena Giulia Rossi on the day. Catricalà focused our attention on the un-definition of media art and its history, arriving at the complex algorithmic contamination that takes place between people, their evolution, their limits and their extensions. 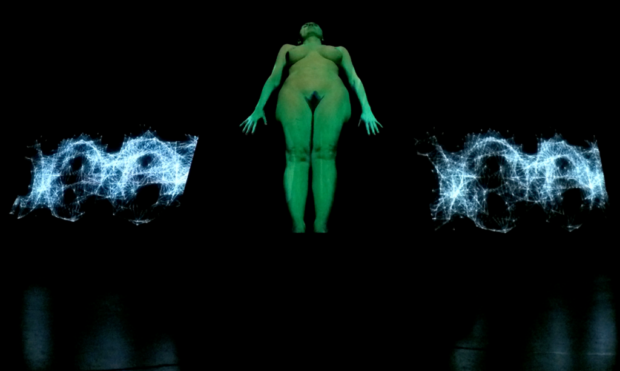 The first evening came to close at the Nuovo Cinema Palazzo with the extraordinary performance of BodyQuake with the performer Francesca Fini, who ‘wore’ the data on epilepsy, embodying an inner earthquake which deeply moved all participants. The following day focused on the limits of “Artificial Intelligence”, starting with a video showing a profound and attentive reflection, an interview given by the humanist philosopher Stefano Capezzuto to the Neapolitan philosopher Aldo Masullo. Do machines suffer? Do they really feel pain? What do we mean by pain? What difference is there between human pain and artificial struggle? Is what we call intelligence really intelligent or are we still at the “electric mixer” point? To answer these questions and pose others with exceptional competence and transversality, the editor (and not only) Luca Sossella encountered the philosopher (and Masullo’s pupil) Lucio Saviani, Guido Vetere (former Director of the IBM Advanced Studies Centre) and Stefano Capezzuto. The meeting reintroduced an “ethical challenge”, which is part of the Task Force’s ten challenges promoted by AGID, Agency for a Digitaly Italy and published in a white paper, which now includes a contribution by our own Salvatore. Iaconesi has contributed to the proposed challenges by indicating how public administrations should introduce artificial intelligence as an element of citizen services and how ethics and aesthetics in this field are an active part of this important research, as well as a challenge. As Salvatore and Oriana remind us, the introduction of artificial intelligence is, above all, an existential and psychological challenge that must be confronted using a transdisciplinary approach in which the humanist disciplines, art and design are brought together. This approach plays a fundamental role as technological innovation is not centred on needs, but rather on people’s imagination, aspirations and desires. This is a challenge which certainly represents a starting point from which to connect and influence training, education and the school system, which are sensitive, fragile and essential nuclei for the future. The subsequent question could therefore be: is it possible to build schools in “intelligent” ways (beyond the artificial) which are able to promote these kind of encounters, stimulate reflection, investigate dynamics and relations in order to establish a new aesthetic and ethical poetics. This is a call to seize this opportunity to activate new and profound changes, essential for a rethinking of the human, allowing humans to live alongside this hybridisation and moving the anthropocentric axis towards a diverse and plural viewpoint – one which is connected, ubiquitous, methodological, new, intelligent, constitutive, dynamic, political and innovative. This is a new politics of innovation, imagination and creation, where an authentic and stimulating poetry can be created from numbers – an acceleration of profound sense and meaning. 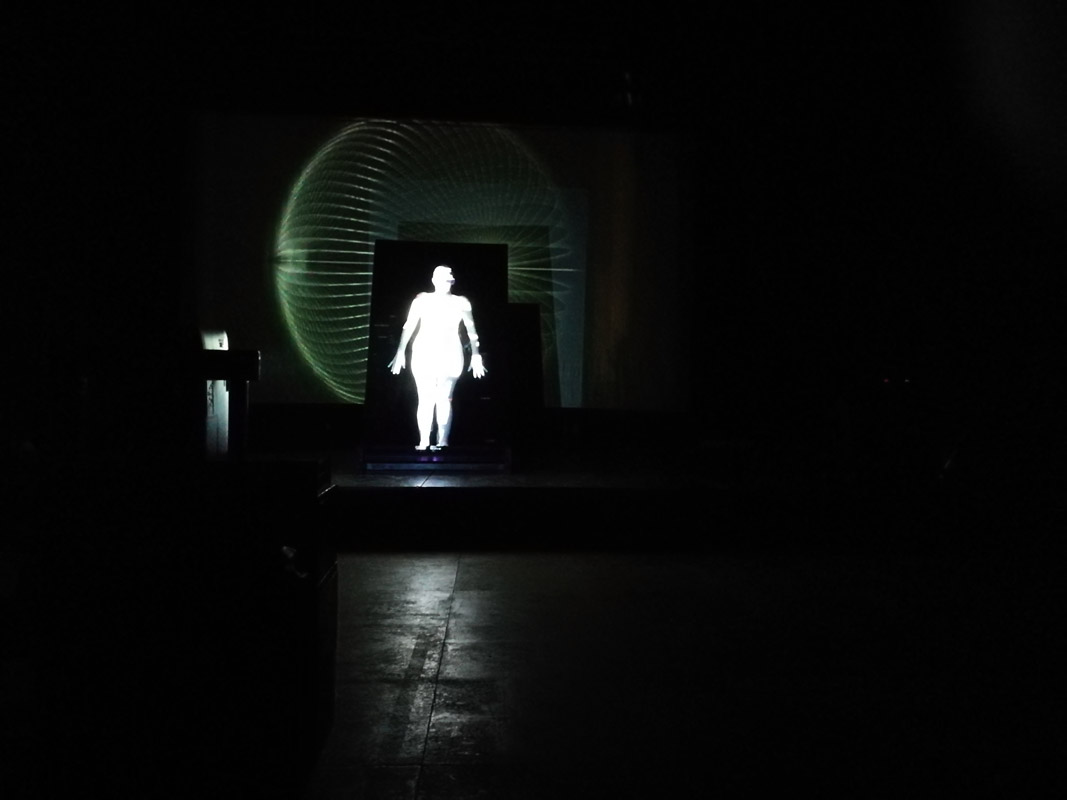 To conclude, does a poetics of the algorithm exist? Is it still art? What is the relationship between data and human beings? Does this relationship limit the artist? What can the artist do? Can there really be a politics of creation? Can there be a culture of/on data? A new type of school is possible – one that in-forms and initiates collaboration processes, leaving behind filter bubbles to access new spheres of imagination. What is important is to take part in this knowledge process in multiple ways and in possible worlds with the aim of participating in the attempt to build a new narrative, a new imaginary and deep sensitivities.