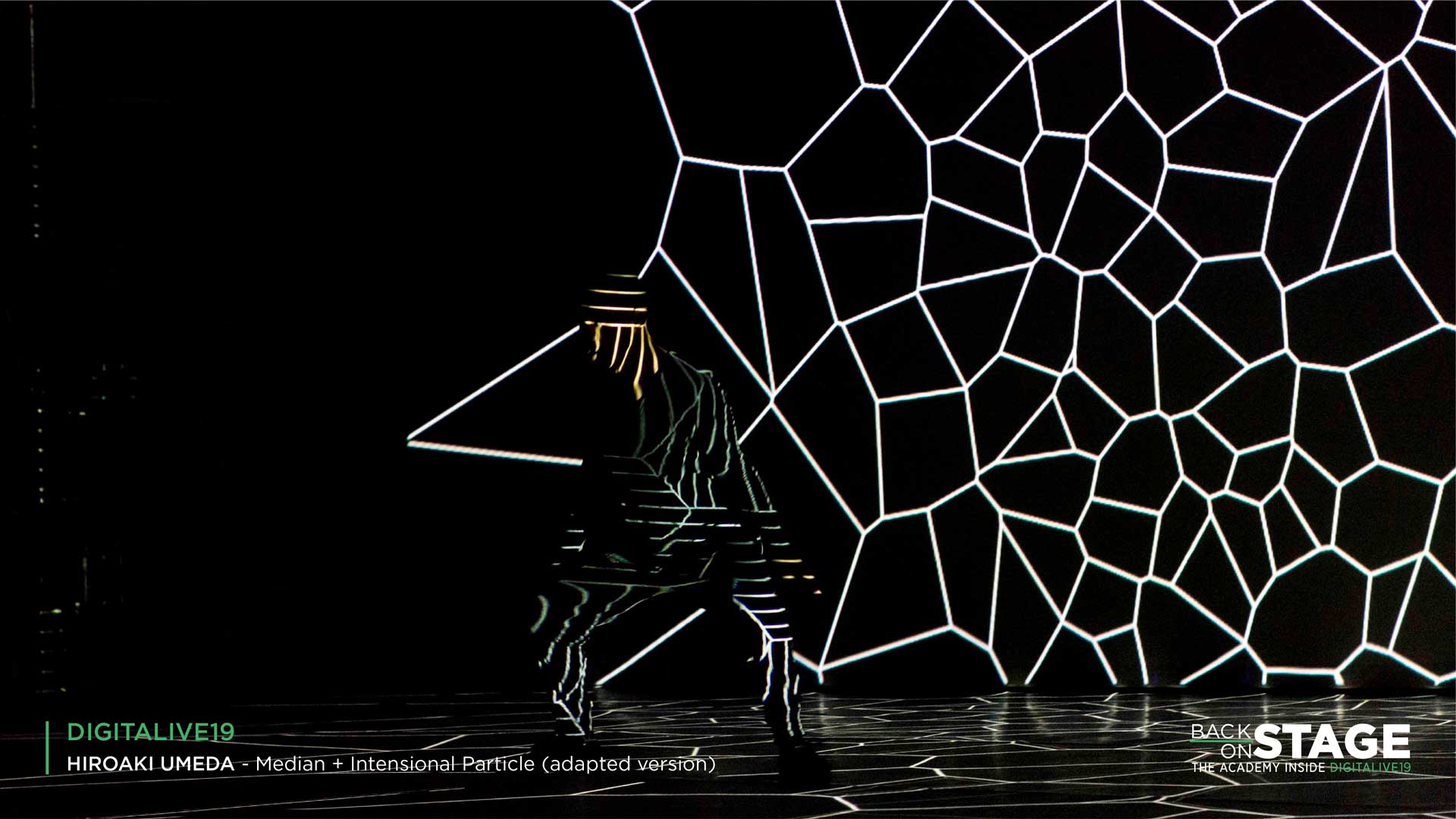 Invited to take part in the second edition of Romaeuropa Festival, Digitalive 2019, Hiroaki Umeda presented a reworking of two of his performances adapted for the Mattatoio space, thus creating Median+Intensional Particle.
The place where Umeda transports the public through his performance appears to be a parallel universe. A completely dark space where the audience and the artist’s body are to be found. On the wall and on the floor, virtual graphic images take the shape of organic particles, as suggested by the work’s title. Accompanied by electronic sound, they come to life by synchronising with the human body. The stage transforms into a place where the boundary separating human and digital reality is blurred. Umeda’s choreography appears to influence the images and, in turn, they seemed to interact with his body, embracing it. 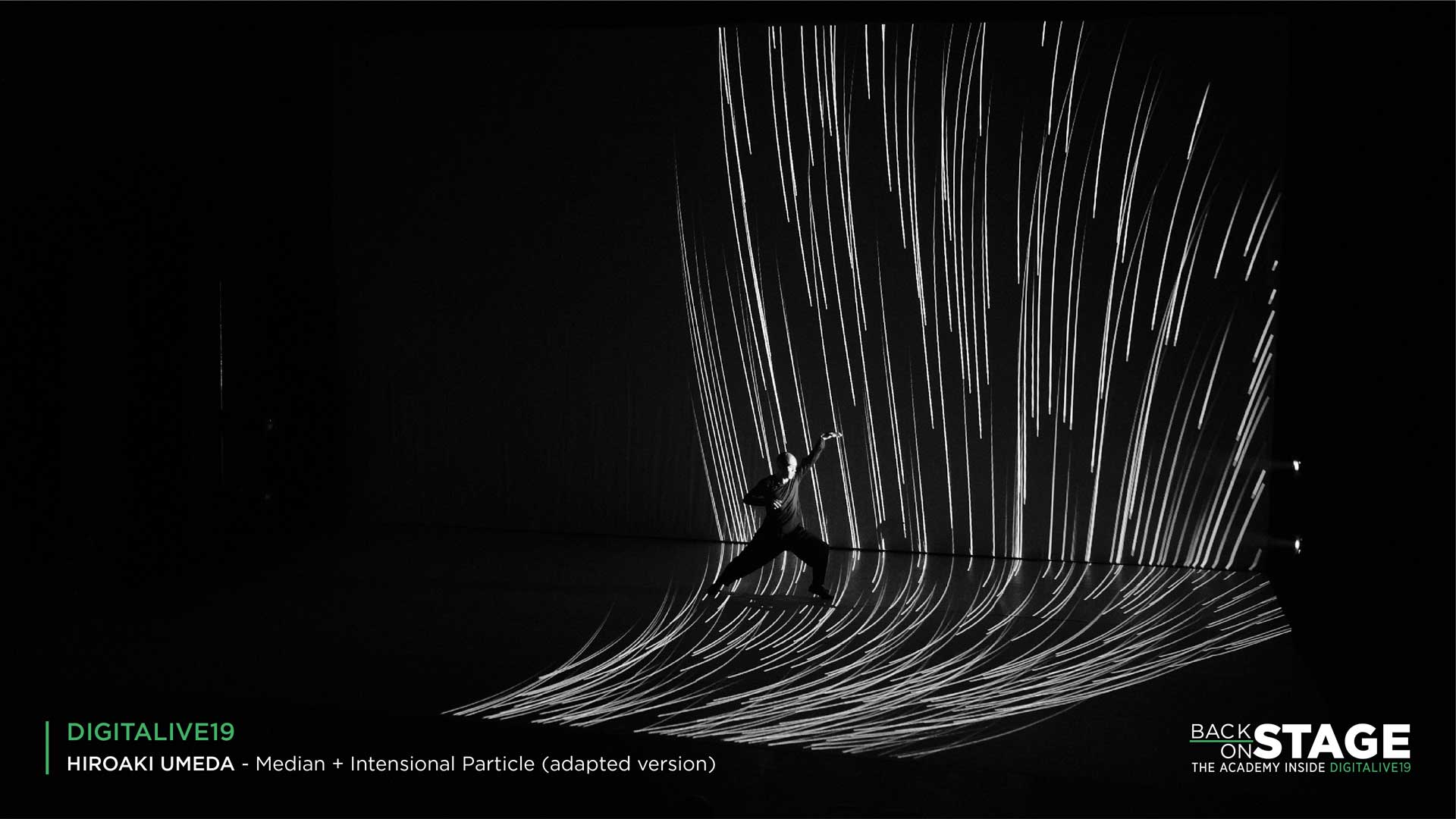 In Median+Intensional Particle dance meets technology, creating an environment with an intense sensory input. The immersive space, in which the artist’s body merges with the images, generates a single flow that includes video projections with strongly contrasting light and shadow.
The software captures and analyses the body’s movements and the energy which exerts a force on it from outside. An empathic relationship is established between a phenomenon that always appears as something purely scientific – a computer which has feelings attributed to it – interacting with the most hidden nature of the microcosm. High-pitched and fragmented sounds mix with the dancer’s broken movements to create a single dialogue. 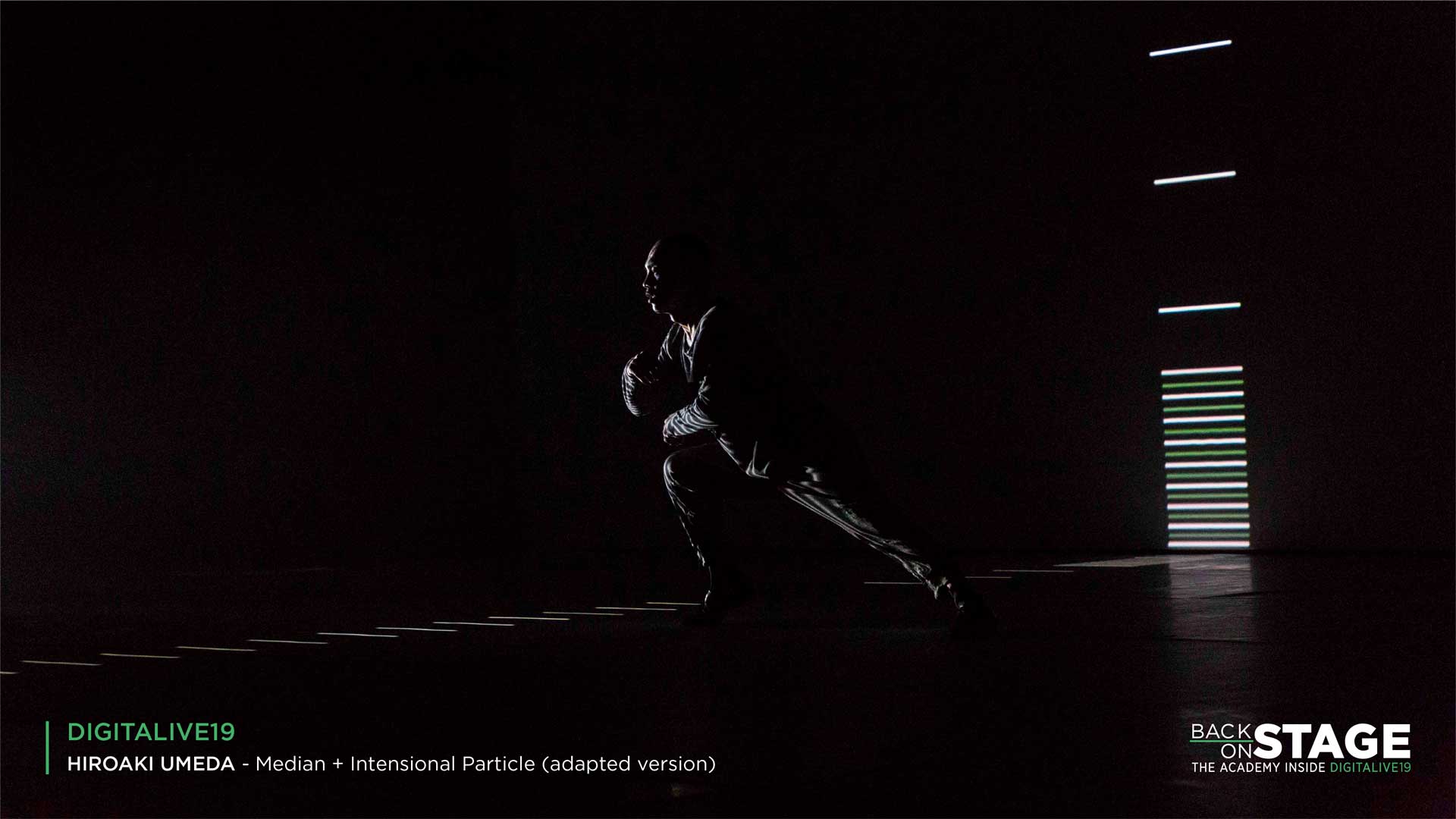 The audience witnesses the hypnotic dance between the micro and the macrocosm, between organic matter and technology, between scenic and digital art. The distance between these worlds is eliminated, the existence of one is impossible without the other: the intentional force of multimedia elements becomes as powerful as that of human expression.
This is philosophical research into nature and science through art, where nature and science recount a human body in movement, together with every particle and molecule, so as to remember that it is an integral part of an ecosystem and that, at the microscopic level, a human molecule is similar to that of other biological species inhabiting the earth. Umeda thus investigates the code of life, almost as if to remind us of the sacred and unbreakable link between the micro and the macrocosm. The body of the dancer vibrates alongside the images on the digital screen.

The use of multimedia, therefore, is not limited to the set space, but is used as true aesthetic research which contributes to the awareness of the role human beings play within the ecosystem, not as dominant figures but as part of an interconnected world. At the same time, Umeda attributes a new identity to new media, not as something that manipulates man but, on the contrary, as something that coexists alongside him. The public is shown an alternative world where the cohesion between man and digital media gives life to one vital flux.

Hiroaki Umeda is a Japanese choreographer and international artist who develops his research by merging different disciplines: dance, sound, video and light. He founded his company S20, travelling the world, and introduces the public to a transcendental artistic methodology where the movement of space and time takes place within a multimedia environment. The works Median+Intensional Particle are an adapted version which Umeda will exhibit at Pelanda in this year’s DIGITALIVE edition.

‘Rituality and Synaesthesia’ at Contemporary Cluster in Rome

‘Rituality and Synaesthesia’ at Contemporary Cluster in Rome