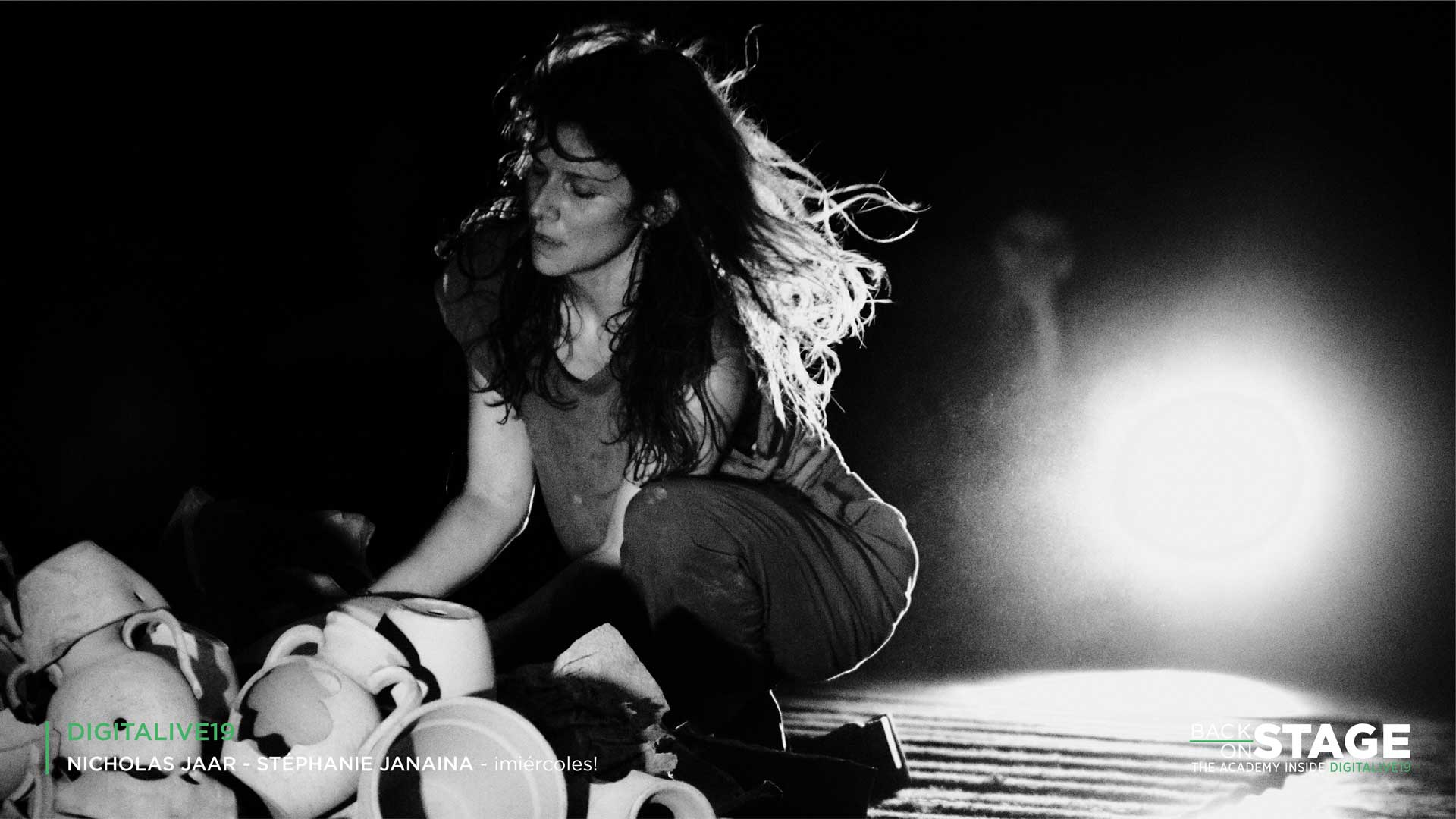 ¡miércoles! is duo Nicolás Jaar and Stéphanie Janaina premiered in Rome at Digitalive19, a section of the Romaeuropa Festival dedicated to algorithmic performance and curated by Federica Patti. The two artists realized a three hours improvised performance, between music and dance. 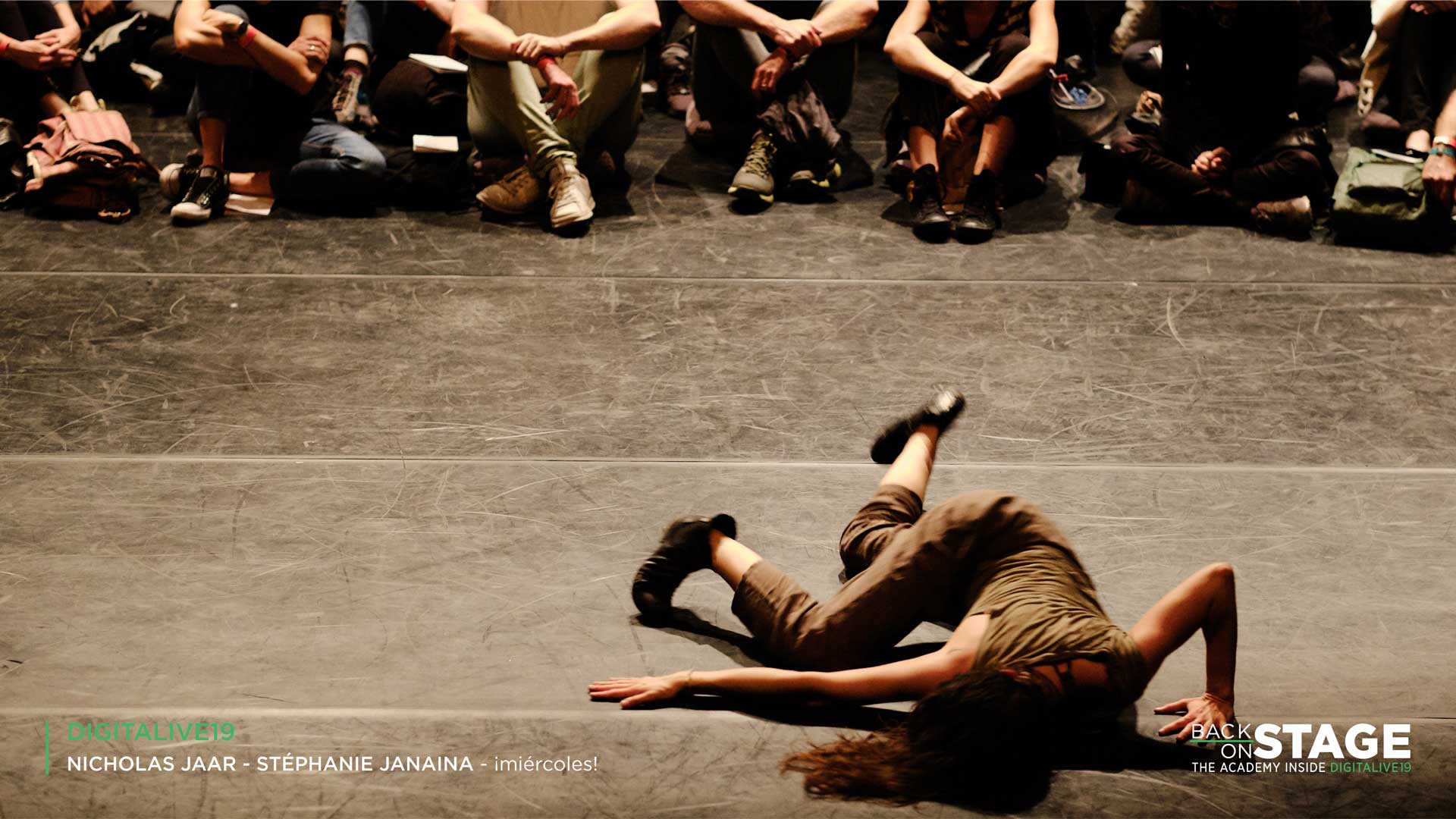 ¡miércoles! in Spanish means ‘Wednesday’ while in Chile it also means ‘shit’. It is the day of the week that takes its name from Mercury and is, in fact, the only image printed on the booklet distributed by the artists. The black and white symbol of the Greek god is used to represent ¡miércoles! In the brochure distributed to spectators and created in collaboration with visual artist Maziyar Pahlevan, there are references to the study carried out by the two artists on site, with an accurate description of the place where ¡miércoles! is performed: the Ex-Mattatoio, Testaccio and Monte dei Cocci. 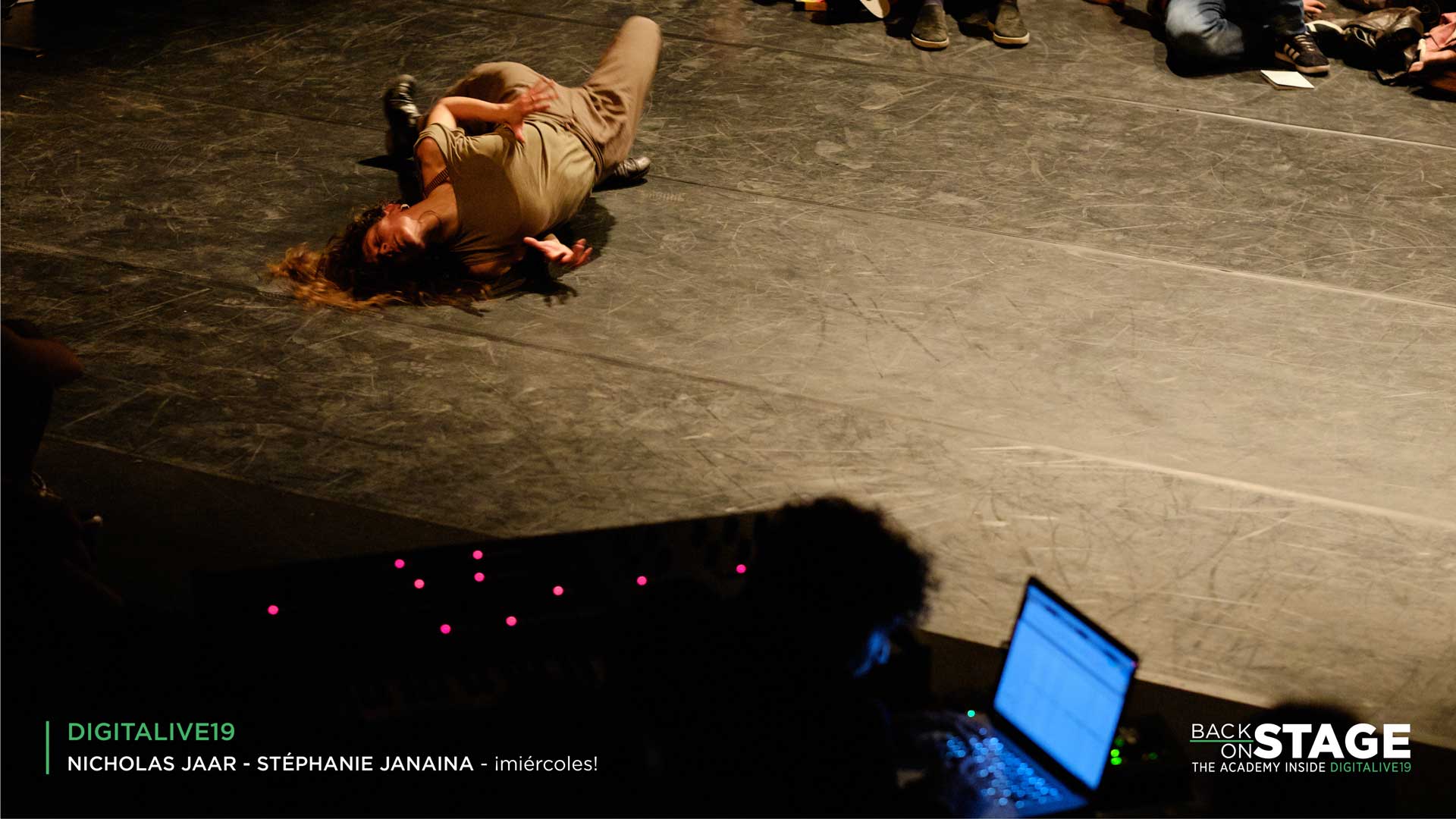 Stéphanie Janaina, with extreme care and respect for the space she is in, represents the difficulty man experiences when occupying a space saturated with material goods, things and rubble. She achieves this by initially walking through the space, manipulating it by using sophisticated movements and gestures. When watching ¡miércoles! it is possible to observe not only the dancer’s sweat and fatigue, but also the planning that has gone into the work – a subtle invisible connection, which is simultaneously unsettling, linking the choreographer’s work to that of Nicolás Jaar, one which establishes a linear continuity between sound and dance.

The musician introduces sounds taken from the environment before immersing the audience into an ideal, more intimate space. It is precisely when the artist decides to enhance the scene with a substantial number of ceramic pots that the audience realises that they too are part of this environment. The perception of the space is now enriched by the process the musician uses to produce an emphatic and intense melody: the sampling of the sound is made by one of these vases passing over the microphone.

We now reach the heart of the performance: from this moment onwards, the musician’s effort turns into sacrifice, willpower and renunciation. In a progressively obsessive way, both artists try to achieve a physical and mental state that welcomes the emotional participation of the audience. The psychedelic element, combined with the masterful use of microphones, reveals an enigmatic identity which Jaar loves to lose himself in through rhythms that are sometimes soft, sometimes hard. In the meantime, the listening experience produces a friction between discordant and unexpected thoughts that travel in an expanded space.

Nicolás Jaar – Chilean musician and producer born in New York in 1990. Son of visual artist Alfred Jaar, Nicolás established himself on the international scene with Space Is Only Noise (2011), followed by successful albums such as Pomegranates (2015) and Sirens (2016). He often attempts sound and performance experiments: his performance during the five-hour concert hosted by PS1 in New York is famous. He also produces several experimental artists with his label “Other People”. In 2015 Jaar composed the soundtrack for the film Dheepan by director Jacques Audiard (Palme d’Or at Cannes). In 2016 he promoted the multi-platform project The Network where he attempted an unprecedented fusion of music and visual art. From this project, which was also broadcast on the NTS radio in London, a book bearing the same name was published by Printed Matter in 2017: a 366-page publication that also includes Jaar’s works of visual art. Jaar has also released albums using other pseudonyms (such as A.A.L Against All Logics) and he founded the temporary band Darkside with multi-instrumentalist Dave Harrington. He is participating in REf19 with the project ¡miércoles! in collaboration with dancer and choreographer Stéphanie Janaina.

Stéphanie Janaina – Mexican choreographer and performer trained in dance, visual arts and film. Her projects are developed around the concept of fragility and its possible manifestations in connection with violence, resistance and migration. Engaged with dance and visual creation workshops for children, adolescents and adults, Janaina tries to construct a deep awareness of communication through the body starting from performative interventions in contexts characterised by vulnerability and diversity. She is the producer and director of Festival4x4, founder of “B.I.C – Biblioteca Itinerante de Coréografia” (Itinerary Library of Choreography) and the project “Colectivo Circular”, focused on raising awareness of the theme of migration in Mexico.

FRAME > I was born