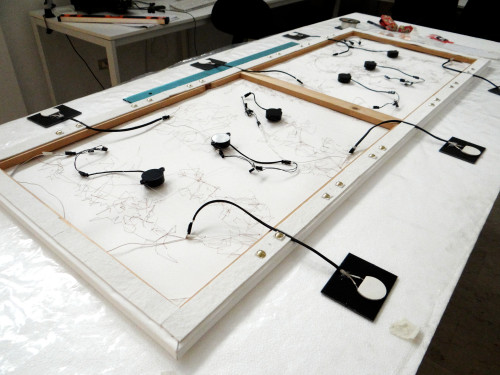 Ode to nature, to its energy, to its beauty, to its ability to be sufficient unto itself and to its being complete and perfect. The poetics of Daniela Di Maro (b. Naples 1977) sings of the power of nature and the way humankind remains fascinated by it, the way we admire its mechanics, its devices and its internal automatisms. It is no accident that when discussing Di Maro’s artistic quest, we associate the idea of nature with terms and functions that can be mutually applied to the technological world for their peculiar ways of representing practices to which every action corresponds to a reaction in a proactive manner. Therefore, it is this integration of these two worlds – the natural one and the technological one – to represent the conceptual focus of Daniela Di Maro’s installations which are created through the combined use of techniques from the electronic and digital world as well as from energetic transformations – such as Arduino, solar panels, customised software – with material derived from nature – like beeswax, plants, minerals and water. Works by Daniels Di Maro are complex and sensitive machines that explore the processes and functions of nature and are constantly activated through the technological element and interaction with the public. Di Maro’s artistic quest is based upon her practice of using: computerized procedures, open-source electronics, audio and video elements leading to continual involvement during both the planning and hands-on creative stages and technicians and specialists in order to build a kind of collective and participative approach to her work. The result is the creation of installations which are calibrated with the space in which the data fed and elaborated by the technology she uses performs the task of bringing the demands of the work itself to life through the presence of an audience whose role is to bring sense and value to the natural/artificial process in nuce. Daniela Di Maro’s artistic exploration describes a poetic and punctual observation of natural processes in which scientific, anthropological, technical and aesthetic considerations merge and where the technological element becomes a means to explain the primordial relationship between humans and nature, thus triggering a moral discussion on what is actually necessary to our survival and on what is probably superfluous.

Jonas Mekas at the ZKM Museum