In the studio of Mario Sasso 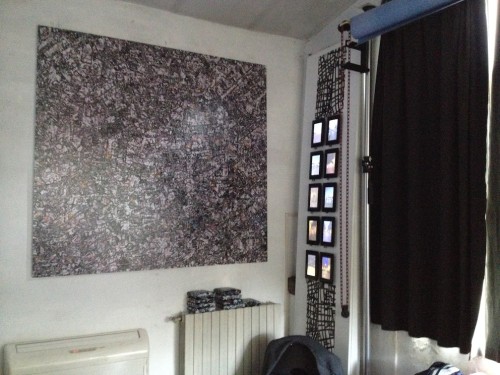 Art and living, the history and geography, anthropology, sociology and digital design. The pioneer video artist Mario Sasso (b. Staffolo 1934) has woven an aesthetic pattern revolving around these methodological groups which feed on the city – using techniques and materials of various extraction and nature to tell of the metamorphosis of a place that is in constant evolution, of a pulsating and incessant terraine de jeu, a space that is tangled, confused, twisted and chaotic.

After an initial period linked to the informal – and alongside a brilliant collaboration with RAI television (he created the television theme for Non è mai troppo tardi – It’s never too late, the «historic programme that contributed to the literacy of many Italians»[1]. Sasso began a quest that placed everyday space and urban space under the same sky. Shifting from what Angelo Trimarco defined (along the same lines as Lyotard) as «a latitude without a centre», a space in which the pressing issues of «cohabitation, hospitality and encounters with other cultures» (issues that «question consolidated identities and acquired values every time») are gauged with a new «measure that spares nothing in order to connect with our neighbor, the foreigner»[2] , the artist created a new type of urban planning, an imaginative road system that started with a map of the city to integrate it with pictorial efforts (this is the case of the Pictogramma – Videogramma project, 1989) or a series of electronic and digital designs which discipline a semiotic system intended to conduct our view inside and beyond the street guide, to pierce through the capillary bowels of the city, to design and plan the very silence (the lack of communication) of the megalopolis. Collant, for example, is a special journey among the streets of Rome. The (in)discreet look of the artist who walks at night with his camera «searching for an identity that the metropolis might only reveal when everyone is asleep, when its structures slide into the shadows while fleeting images seem to emerge from the still calm of the night»[3].

With this artist, the urban landscape is influenced by a reflection: if on the one hand it points a finger at the metaphor of journey and the issues of globalization, migration flux and the hybridization of the contemporary environment (the 2007-2008 Cartografie multietniche – Multiethnic Map making comes to mind immediately), on the other hand we see the artist tend to distance himself from the world in order to adopt a satellite image that cancels out the city, making it anonymous. His cities are packaged up, padded, dilated and brought to a working plan in which everything «becomes centre and suburb. Everything proliferates according to an order of thickening that follows exclusively circular codes of sensitivity and emotionalism» (Bonito Oliva)[4].

The maps used by Mario Sasso are systems of signs, overlaps and combinations, capillary summaries of different places that gradually become a global nation, an indivisible territory, indigestaque moles, (a rude and disordered mass, Ovid) in a scathing reflection upon the state of things today. The riverbanks of life have been burned on the metropolis’ space to introduce the new nature of the city (Hilberseimer)[5]. After all, Jonathan Forman warned us ahead of time that «cities have grown rapidly without any intelligent planning; a quick and disorganized development is responsible for many of the undesirable aspects of life in the city»[6].

Mario Sasso has been «active since the late 1960s as a video graphic artist for RAI television. He revolutionized its look and presentation in the 1980s, especially with the video themes he created and more specifically with the very first 3-D graphics for TG2 and TG3 as well as for his recent works for via satellite international programmes on RaiSat and RaiAmerica»[7]. He is a complete figure who encapsulates techniques of different natures in order to conceive a gallery packed with portraits (his 1999-2006 Quadreria dei video-ritratti [Collection of video portraits] – is extraordinary), maps and electronic junctures that redesign today’s aesthetic panorama. La torre delle trilogie: luce, colore, aqua [The Trilogy Tower: light, colour, water] (1997) is a totem consisting of sixty monitors, two computers, six image editing and sorting switchboards that are reminiscent of the ancient tower of Recanati – commissioned by the iGuzzini company (a work which won Sasso the Guggenhiem Award) is a brilliant example of this artistic course (the «perfect synthesis of painting and technology»)[8], of this adventure which uses videotapes, video installations, digital paintings, scanachromes, cibachromes and electronic paintings to transform the landscape into lyrical space, a crossing place, a fantasy of approach and a vision of the future.

Giacomo Balla’s armchair repainted by the artist for a conference, a tribute to his friend Vettor Pisani and a series of projects are some of the works in his studio, which we visited on 20 June 2014, for you to look at in this selection of snapshots. 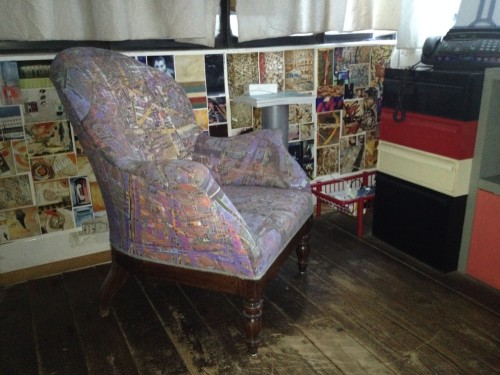 Giacomo Balla’s armchair repainted by the artist on the occasion of a conference, a tribute to his friend Vettor Pisani and a series of projects, are some of the works present in his studio, which we visited on 20 June 2014, for you to look at in this sequence of images.

[1]   M. Sasso, biografia, in A. Filonzi, edited by VIDEOГЛАЗ. Mario Sasso e l’immagine elettronica, catalogue of the exhibit held in Moscow at the Moscow Museum of Modern Art, from 29 October to 30 November 2008, Volume Edizioni, Milan 2008, page 134.

Images (all) glimpses of Mario Sasso’s studio in the snapshots captured by Antonello Tolve during a studio visit on June 20, 2014.