The seventh edition of the “Moving Bodies International Butoh and Live Art Festival”, curated by Produzioni Espace, has changed its program and location due to the Coronavirus pandemic and moved online. Performance is a practice that involves both the body and the audience. Rather than give a virtual form to what has been programmed for the physical space, Francesca Arri, who has worked for years as a performer with the body, and Ambra Gatto Bergamasco, Director of Teatro Espace, challenge themselves again. Not only have they moved the performance online, but they have reimagined it with and for their intended platforms, together with artists specially identified for this experience. Six days of Festival for six artists from all over the world, on 4-9 May, streamed on social media channels of Teatro Espace e Moving Bodies Festival. Each day is dedicated to a different artist, exploring their practice and understanding how the work has been changed, moving between domestic space and the Internet. Francesca Arri told us about this experience – a real experiment focusing on the relationship between the body and the medium, which has resulted in quite a few surprises.

E. G. Rossi: You’re an artist who works a lot with the body and with people. How did you manage to translate all this onto an online space?

This situation has taken us all by surprise. Social distancing and isolation are obstacles to everything that live entertainment entails. The performance is characterised by the relationship with the audience. Mine, in particular, by contact and teamwork. They are choral works. After an initial crisis, I began to understand how to “reinvent a craft” by working, moving with the moment and not opposing it. I have observed and analysed what is happening in the world around us, even if this view has been restricted to the walls of our homes and expanded to the multimedia window, which has become our space for action. I didn’t just want to create content and push it out as a post, but work on the use of the medium so that the performance is like this. What I did with my guys on Zoom is an initial experiment that works on LOADING, that is to say on the time spent waiting for the data to load that has become the time we wait for the liberation from our rooms. All this happens as a result of a trivial gesture, the drumming of fingers on the PC sensor, which reflects impatience and gradually becomes chronic, disturbing, so much so as to create, together with the limits and delays of the platform and connection, a sound work created with metallic effects given by the medium being used – an orchestra of fingers playing on the social platform. The work is created and lives on social media. The audience can see it on Facebook, which acts as its stage; sharing becomes part of the work itself. 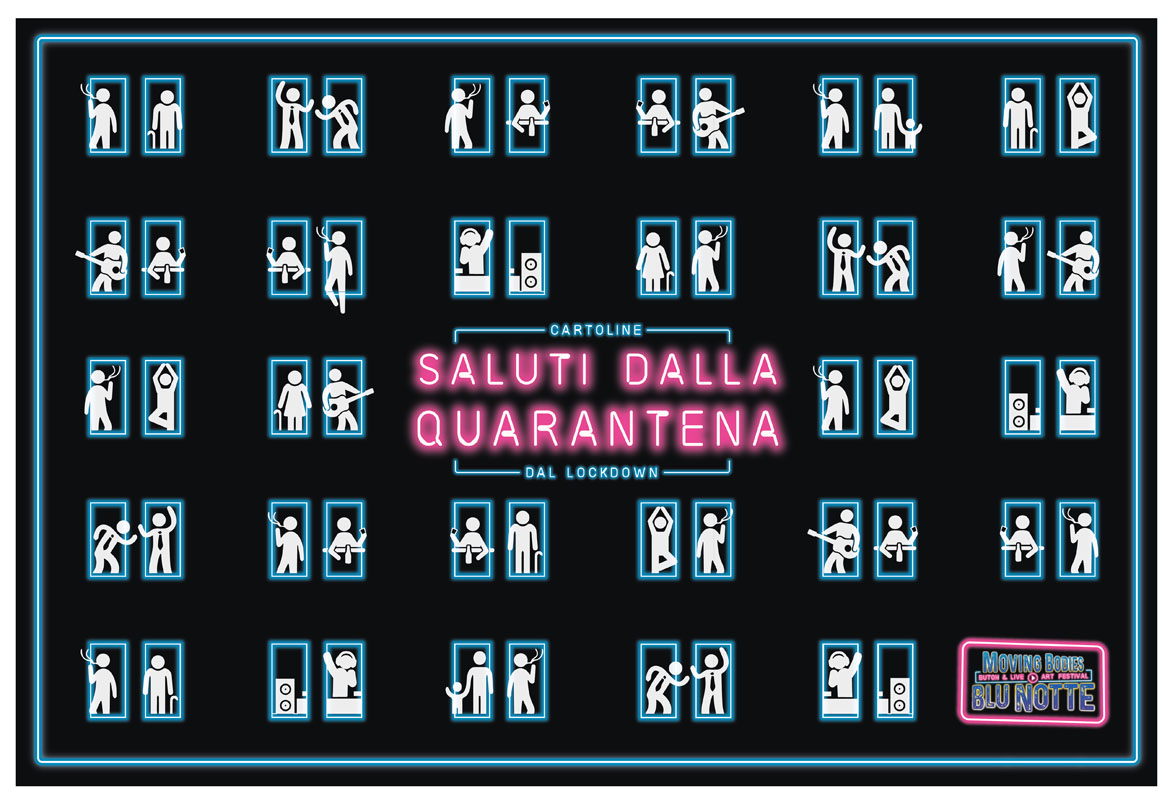 You’re an artist, a curator, and you work in education. What are the advantages and dangers of this sudden move into cyberspace?

I want to go back to live performances, just as I want to go out and be in contact with people. Because of personal issues, I have been completely isolated since the beginning of the Lockdown. I order my shopping online. I’m fine but the isolation is annihilating. Fortunately, there’s the web. However, a window that somehow gives us space and air shouldn’t turn into the noose that strangles us. I’m continuing to develop new work on platforms. The next one will be out in June for Archivissima, the archive festival. For them I had to do a big live project at the Polo del 900 here in Turin that we have postponed until next year and, for this year, we have rethought everything with a view to being used on social media. We are working on a wonderful web experiment but I dream for next year to be live. “Moving Bodies Festival”, however, which I curate with Ambra Gatto Bergamasco, is designed for the web in order not to give in and explore how to carry out research and work in spite of the obstacles, to discuss, look for solutions and ask questions at a time when it’s difficult holding on to any certainties but where it’s important to have doubts. 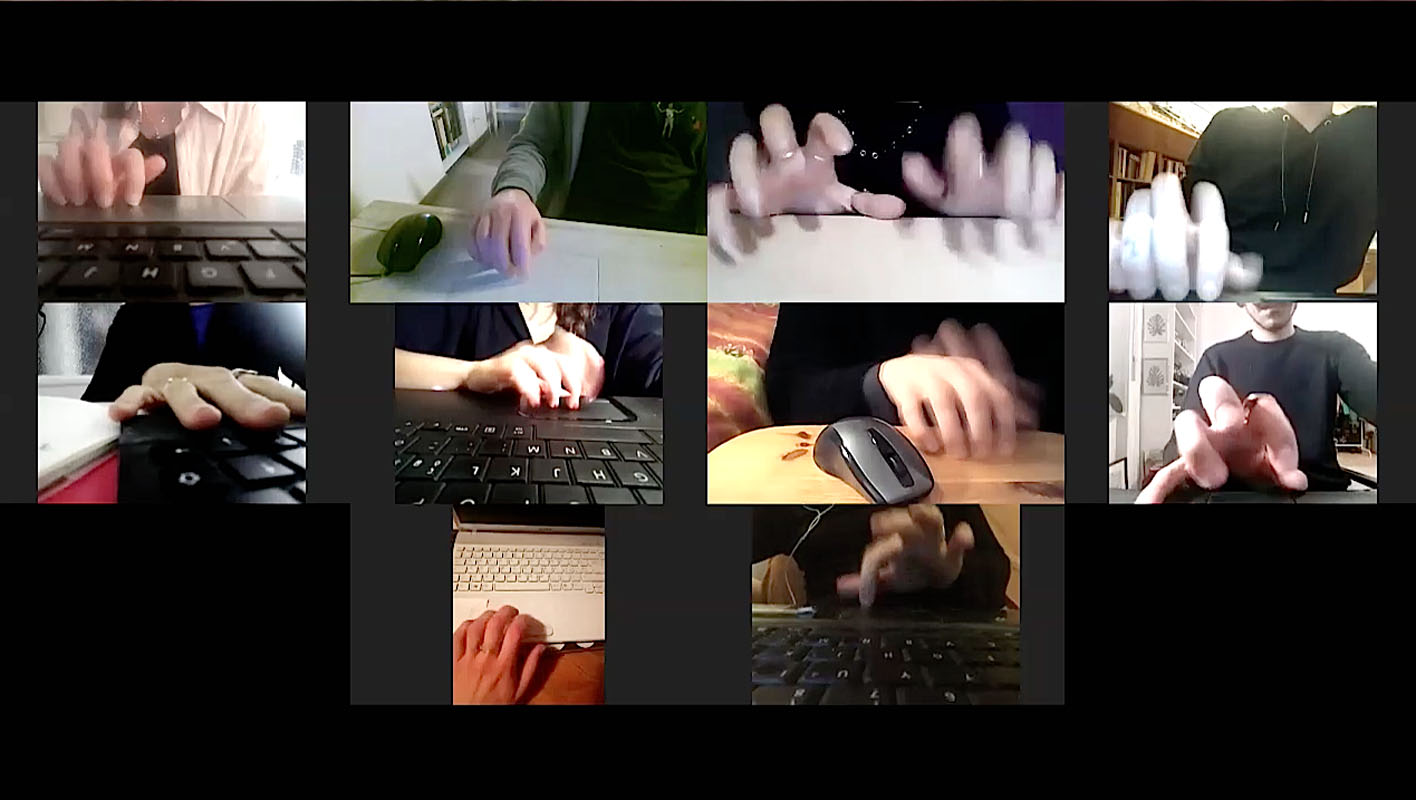 Ambra and I were working on this year’s festival, the seventh edition of a festival which began with our collaboration with Ambra’s experience in Dublin, then developed at Teatro Espace in Turin. We left the walls of the theatre to become Produzioni Espace and for July we were planning a travelling project in various spaces in Turin. When we realised that this wouldn’t be possible, we decided to anticipate and openly deal with the problems, doubts and uncertainties caused by the restrictions that we are now experiencing so severely, because it is important to confront other people and take action. I think it’s time for research and experimentation, maybe even for making mistakes. We have to try and look for a dialogue, that’s why in the Festival we ask our artists not only for a work, but also for a #POSTCARDfromtheLOCKDOWN (#CARTOLINAdalLOCKDOWN), telling us about the quarantine experience in their own country. We invited six international artists who told us, without media filters and noise, what’s happening in their country and to them. These are six different testimonies that generate a dialogue with the user because we’re living through the most extensive experience of social coexistence in isolation, a paradox that has become reality and needs to be narrated. 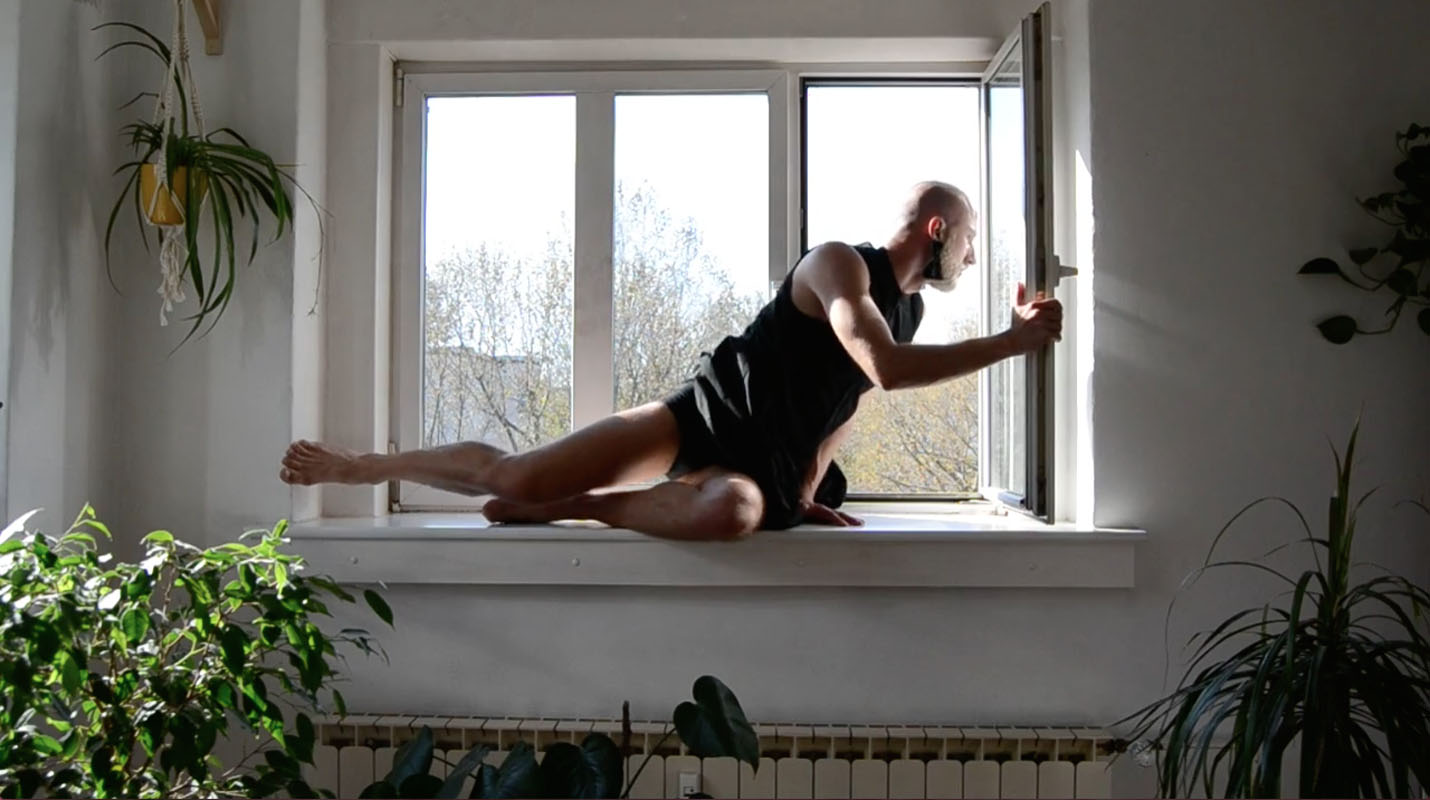 Moving the Festival online was forced by the current situation of sanitary emergency. Are the selected artists the same ones you invited to participate in the physical space? Or did you make a special selection?

IAmbra Gatto Bergamasco and I have chosen artists specifically for this project based on the characteristics of their work and their experiences, in order to have different testimonies from the world, distant from each other, to finally understand what’s happening. For example, Edegar Fernando Starke participates from Berlin but he’s Brazilian so he tells us about both his experience in Germany and what he’s hearing from his relatives in South America, developing his art on his own, away from his company or organisation with which he usually works hosting artists from all over the world. From Berlin there is also Vincenzo Fiore Marrese, an Italian living in Germany who tells us about how he has rethought domestic spaces for his work and with a view to hosting artists in the future, giving them the opportunity to work safely; Yokko, a Japanese artist from New York, tells us how her online lessons help her to overcome her claustrophobia and fear of violence which in America, as a result of fake news, is being perpetrated against those who, like her, are Asian; Girolamo Marri from Rome tells us about the problems arising from the news invading us during this time and, both in the postcard and in his work, irreverently confronts us with the problem of mediocrity at a time when heroism and post-apocalyptic fantasies are being loudly promoted; and Yumiko Yoshioka, from Tokyo, tells us that the lockdown in Japan is not compulsory even if they are very good at self-discipline, and he tells us how much he needs to resume dancing even to boost his immune system. While listening to Renton from Trainspotting, I manage everything: spaces, food and work. The calls from friends and my mother give me oxygen while the sound of ambulance sirens mark the passing of time. At the end of the Festival,we decided to dedicate one more day to a BONUSTRACK: people who work in the backstage, the ones who make everything possible, a category that today particularly lives in difficult times. To talk about this argument we decided to recount the work of our close collaborator collaboratore Conleth White, light designer di Dublino who has been working with us since 2011 and who celebrates this year 40 years of career. Without his vision we would be all blind. 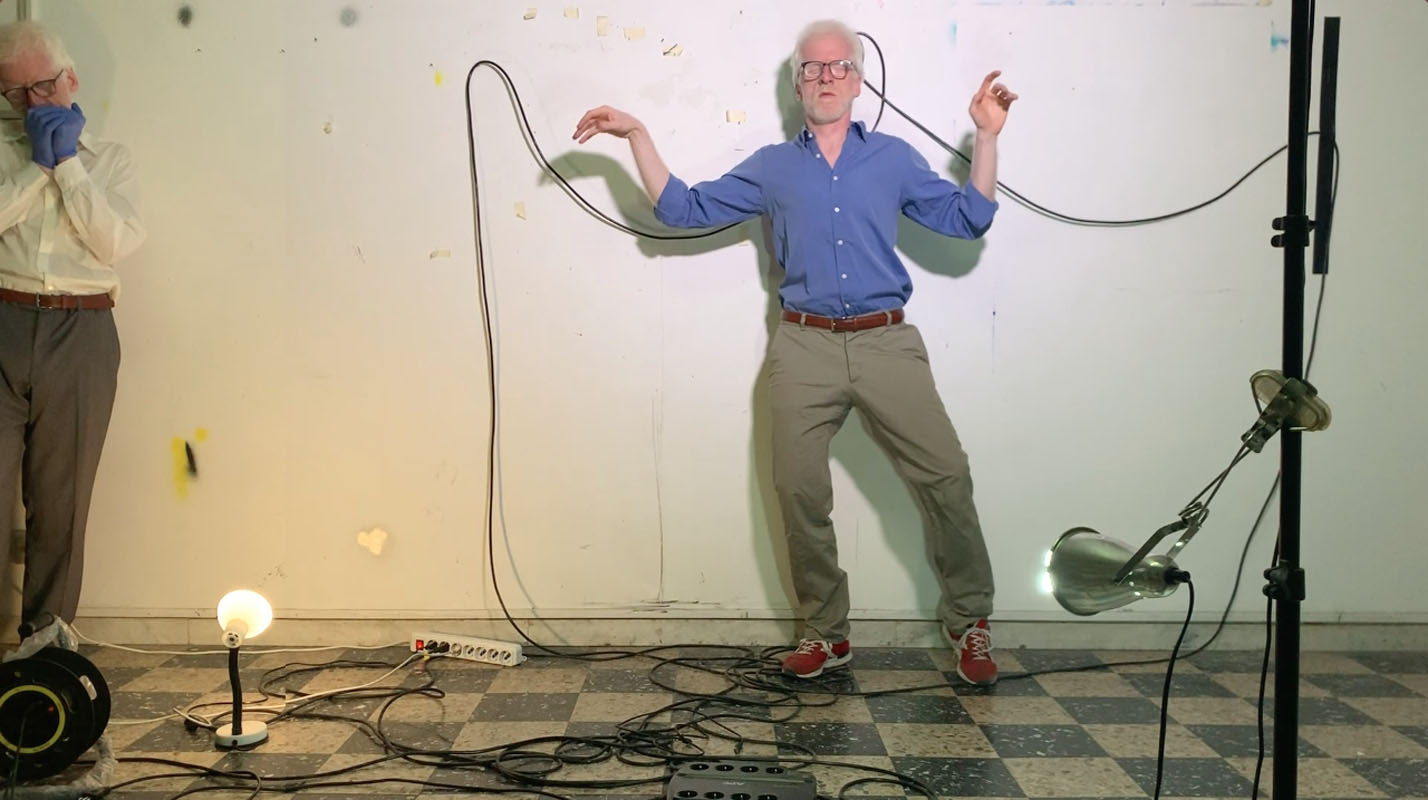 What were you expecting and what finally surprised you?

I thought it would be easier to organise an online event than a live one. On the other hand, it was very difficult because of connection problems, but also remaining in contact from a distance, taking into account language and time barriers, chasing each other across various time zones. Then fortunately we met with a great deal of interest. So Ambra and I are spending our time answering messages, emails and phone calls while we bounce pieces around on group and various platforms to make sure they reach as many users as possible. We haven’t slept much but we’re happy and moved by the enthusiasm of the participants, both artists and users, and by how, spontaneously, the performances have been shared even by strangers, commented on and highlighted. We weren’t expecting this. Above all, because we started from scratch, just the two of us, with the help of our graphic designer Matteo Giampietro. He is a young artist who designed an ad hoc project for the Festival BLUE NIGHT theme, inspired by the American Late Shows, which using a modernist aesthetic recounts all the moments of the festival, a night lasting as long as a quarantine, a moment of reflection to share and develop through mass media. Let’s hope this is a beginning. We’re already working on the next project so that live art doesn’t disappear. You have to move, not just to be there at any cost but thinking of the future and building it, a social and political act, not only for the sake of art, but to find a way to reduce distances.

Robert Adrian. The World in 24 Hours