by Antonello Tolve
in focus, Interview

Manuela de Leonardis, in conversation with Antonello Tolve, discusses the «interview» as a dialogic method to enter into the artist’s work. The interview is the subject as well as the object of her research of her latest publications.

Antonello Tolve  You have been using the interview as a form and dialogic formula for some time now in order to penetrate the work of an artist. What does this bipolar expression mean to you?

Manuela De Leonardis: Yes, the interview formula is one that has been with me since university. It was a necessity at the time since my thesis in Contemporary Art History was about the work of four living artists (Maria Lai, Mirella Bentivoglio, Elisa Montessori and Tomaso Binga). Since they were not historicized artists, meeting them in their studios and collecting their testimonies was fundamental. Later on, my encounter with Fabio Mauri was decisive in acquiring awareness of the elective affinity with the formula of the interview. It was in 2004. We were in his studio in Rome on via Santa Maria dell’Anima sitting one in front of another. He was chain-smoking and the 90-minute cassette kept on rolling in the tape recorder, to be substituted by another. Other times, other technological means. But the method doesn’t change. 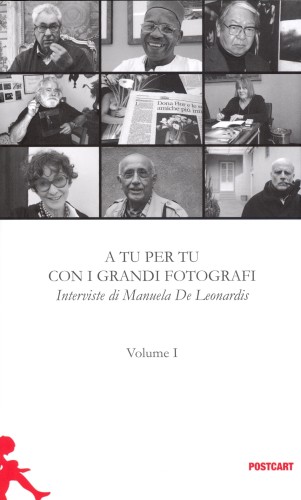 It is an encounter between glances, first and foremost. In fact, I do live interviews, rarely via-Skype and never by phone or e-mail. I like the privileged relationship with the person I am speaking with, which could always be the beginning of a new relationship – personal or professional – but a special connection is not always necessary. 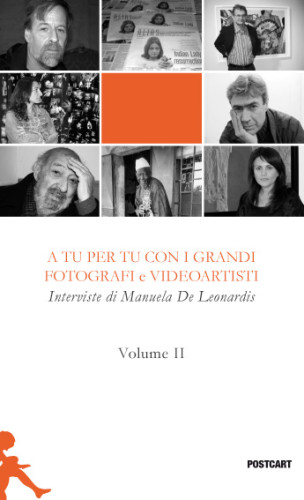 Would you like to delineate the heart and core of these three books?

The first book came into being with the collaboration of my publisher Claudio Corrivetti (Postcart) who inaugurated his series of essays called Postwords with A tu per tu con i grandi fotografi. Since he is photographic publisher, he is oriented towards the big names on the international photography scene: Elliott Erwitt, Letizia Battaglia, Gabriele Basilico, Eikoh Hosoe, Daido Moriyama, Malick Sidibé…We collected interviews that had already been published in the magazines we collaborate with – especially il manifesto, art a part of cult(ure) and Exibart – inserting photo portraits that I took of the various celebrities. The interviews are published in their entirety whereas they are usually published in an abbreviated version in magazines for reasons of space. In the other two books, I had the liberty of expanding my view, including video-artists and then artists who use other media forms, including photography. Among the countless artists, I have tried to dedicate time to women: Lalla Essayidi, Larissa Sansour, VALIE EXPORT, Mona Hatoum, Sarah Moon, Parastou Forouhar, Rinko Kawauchi, Loredana Longo, Regina José Galindo…- and I am particularly happy that Japan’s Miyako Ishiuchi, who I interviewed for Paris Photo 2011, won the extremely prestigious Hasselblad award this year.

In your opinion, what revolves around the work of a person who constructs an interview?

The ability to listen, patience, curiosity…An interview must be constructed by studying the artist’s work, without taking anything for granted. Then there is the encounter which sometimes resembles a session with a psychologist. Lastly, the stage where you listen to what you have on tape and write the transcript. Spoken language is not exactly like the written word. We know that. 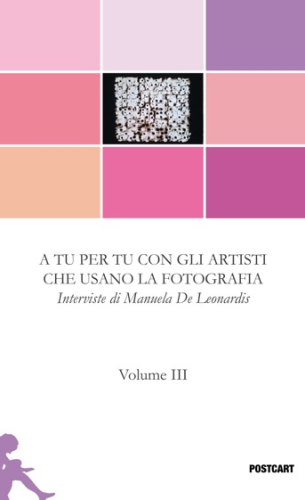 Leo Longanesi once said – and not without cruelty – that the interview is a stolen article. However, if you look examine it, inter-view indicates a precise movement, a shift. It means (from intra, inter, in the middle, inside, come in and see, illuminate) to enter the view of another person, their point of view. To hold back our own narcissism and give another person a chance to tell about themselves in first person. Which method do you adopt when you construct an interview?

I research the artist’s work and try to read other interviews. I’m sure that my own inquisitive nature is my base. For instance, I often ask questions that might seem trivial to some – about cooking or food that (in my opinion) are indications of creativity and interesting sources for social-cultural explorations.

Dialogue, from the Greek dia-logos is, on the other hand, a composition of alternating thoughts, a meeting between two minds. Do you think the interview is close to this structure?

Absolutely! There is no guarantee, though, that the masks will crumble. After all, I’m not a psychologist.

A tu per tu [Face to face]  seems like a work in constant progress, a sweet project that indicates a progression, a series of new stages. Are you planning any other books?

The English translation of the first volume should be out by the first half of 2015. The title is Face to face and it will contain thirty interviews with internationally known photographers including some that have not yet been published elsewhere along with those featured in the A tu per tu series. Then we’ll see…my publisher has been jokingly talking about the De Leonardis Encyclopaedia. Are people even still buying encyclopaedias?